Sandy Hook shooter Adam Lanza kept a detailed spreadsheet with 400 mass murderers, it has been revealed

Before he walked into Sandy Hook Elementary School and gunned down 20 children and six educators, Adam Lanza kept a spreadsheet with 400 mass murderers.

Lanza began researching his extremely detailed list in 2006, six years before he committed one of the most horrific mass shootings in American history.

The list had 17 categories, including the number of people killed, the weapons used, the date, time, and place of the murders, and what happened to the killer.

The spreadsheet was among more than 1,000 documents recovered from Lanza’s home in Newtown and obtained by the Hartford Courant.

Lanza was so obsessive about his spreadsheet and the details it contained that he would even make corrects to mass shooters’ Wikipedia pages.

One such Wikipedia entry was for George Sodini, who killed three people in a Pittsburgh gym before shooting himself dead in 2009. 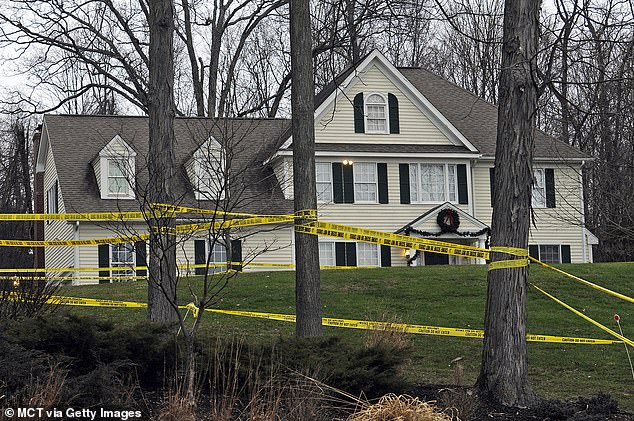 The spreadsheet was among more than 1,000 documents recovered from Lanza’s home in Newtown (pictured following the 2012 mass shooting)

Lanza spoke of his spreadsheet in one chatroom.

‘Compared to the legions of people who focus solely on serial killers, it’s almost impossible to find anyone who’s interested in mass murderers so I thought that I might as well introduce myself,’ he wrote.

‘I’ve been researching this topic since 2006 and I started compiling a formal list at the beginning of 2010.’

It remains unclear why Lanza stopped adding to his spreadsheet, although one June 2012 online post illuminates his state of mind.

‘The enthusiasm I had back when Virginia Tech happened feels like it’s been gone for a hundred billion years,’ he wrote, referencing the 2007 massacre that left 32 dead. 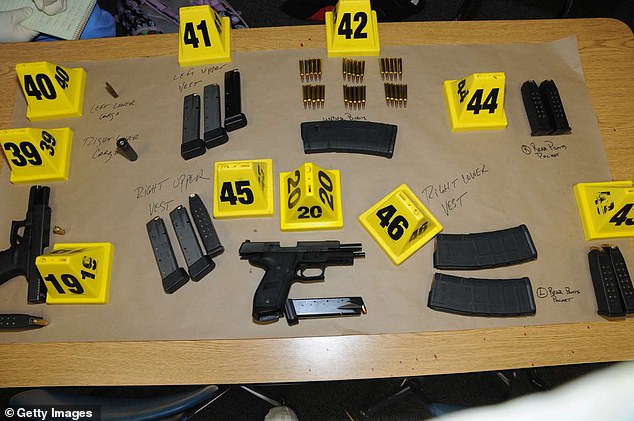 The list had 17 categories, including the number of people killed, the weapons used, the date, time, and place of the murders, and what happened to the killer. Pictured are the firearms and ammunition found next to Lanza’s body at Sandy Hook Elementary School 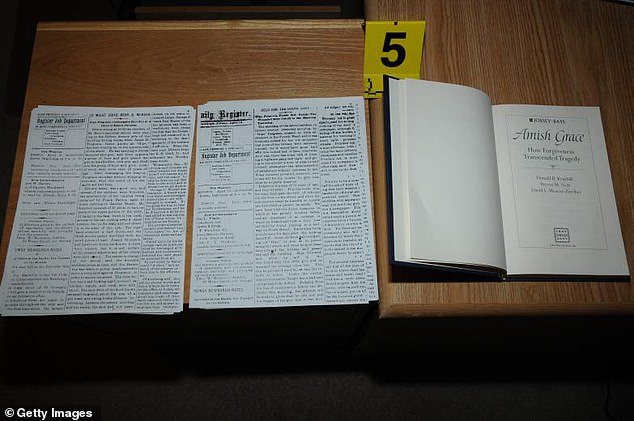 Documents obtained from Lanza’s home (pictured), where he shot and killed his mother, show the evolution of a boy excited about his hamster to a man obsessed with murder

Documents obtained from Lanza’s home, where he shot and killed his mother, show the evolution of a boy excited about his hamster to a man obsessed with murder.

When he was in the third grade, Lanza wrote in his journal about the day his parents brought home Skippy the hamster.

A young Lanza dreamed of becoming a farmer and once wrote a paper about a family vacation to New Hampshire.

But by fifth grade his work had turned exceedingly dark, as seen in a 52-page story he wrote with another boy called Big Book of Granny.

The book includes a scene in which ‘Granny’ goes to a daycare center with her son and a character named ‘Dora the Beserker’.

At one point in the story, Dora tells Granny ‘Let’s hurt the children’. At another point, Dora admits she likes hurting people – especially children.

In one chapter of the book, Granny kills people on the set of ‘Granny’s Clubhouse of Happy Children’. One part of the book references a game called ‘Hide and Go Die’. 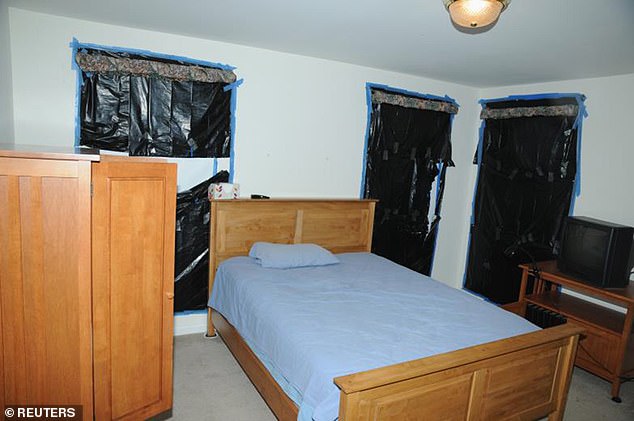 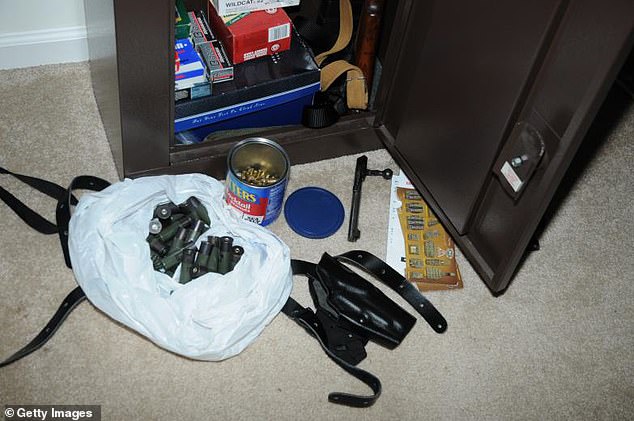 Ammunition found in a gun safe inside Lanza’s bedroom. Documents show that Lanza was obsessed with firearms

While he was a seventh grade student at St Rose of Lima School, Lanza wrote essays that were so disturbing his teacher showed them to the principal.

The teacher said the ‘level of violence’ in the essays was ‘disturbing’ and that Lanza’s ‘creative writing was so graphic that it could not be shared’.

An Office of Child Advocate report found that the essays showed Lanza was ‘deeply troubled by feelings of rage, hate and (at least unconscious) murderous impulses’.

The story described itself as being about ‘the beauty in the romantic relationship between a 10-year-old boy and a 30-year-old man’.

It was just one document that showed Lanza’s obsession with pedophilia, and also included scenes of familicide and goths committing suicide.

There was also an eight-page document simply titled ‘Me’, in which Lanza reveals he has ‘nothing but scorn for humanity’. 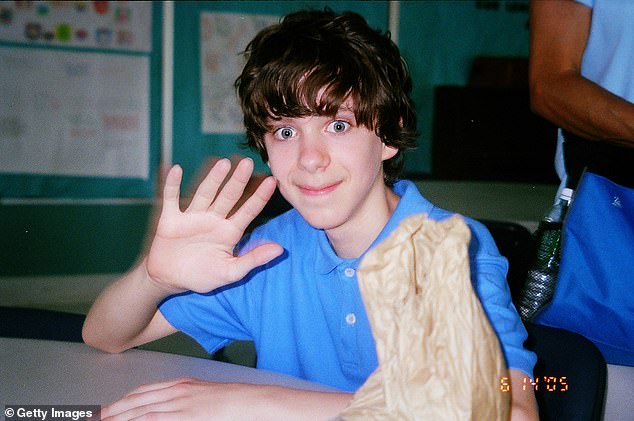 While he was a seventh grade student at St Rose of Lima School, Lanza wrote essays that were so disturbing his teacher showed them to the principal. He is pictured here in 2005

‘I have been desperate to feel anything positive for someone my entire life,’ he added.

‘Killing yourself would intuitively be moral because you would not have the capacity to commit immoral deeds, which you innately do through being alive; and yet many would somehow forbid suicide as being immoral,’ he writes at one point.

‘Starve off the parts you don’t need. They’re ugly and they drag you down. Food is mean and sneaky,’ he wrote. 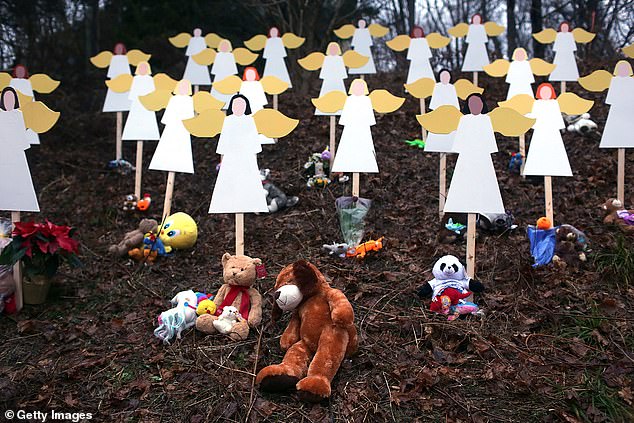 ‘It tricks you into eating it and it works on you from the inside out making you fat, bloated, ugly and unhappy.’

Harold Schwartz, who was on the Sandy Hook Commission, believes Lanza’s extreme anorexic condition – he was 6ft and 112lb – resulted in brain damage.

‘I made the argument in the report for both the commission and the [report put together by the state Child Advocate’s office] that his extreme anorexia may have produced an organic brain syndrome – brain damage from starvation,’ Schwartz said.

‘While still a theory, these documents support that conclusion.’

Schwartz believes the documents obtained from Lanza’s home are also ‘further evidence of the very dark place that was Adam Lanza’s world’. 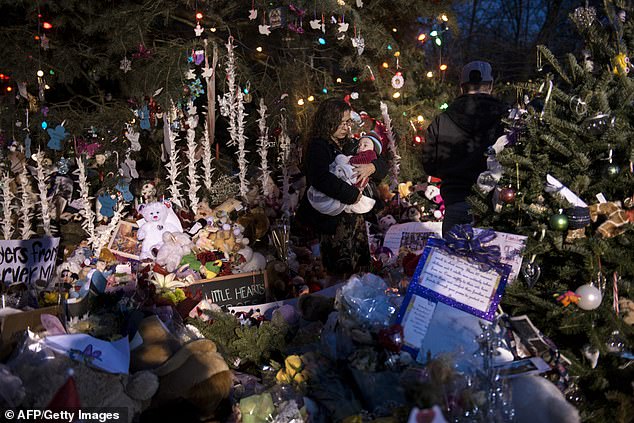 The documents also show one of Lanza’s victims, Mary Sherlach, was the chairperson of his Planning and Placement Team in the late 1990s and early 200s.

Sherlach communicated with Lanza’s mother and coordinated his speech and occupational therapists.

In one document, Nancy Lanza praises Sherlach as being ‘very helpful in keeping Adam’s stress level at a minimum’.

Sherlach was the second person killed when Lanza stormed into Sandy Hook on December 14, 2012.