Adam Rolston plays the longest golf hole ever in Mongolia

The par 14,000 is an incredible feat that Adam Rolston completed in September – with the help of his friend and caddie Ron Rutland – to raise money for children’s sports charity Laureus.

It took Mr Rolston, from Northern Ireland, and Mr Rutland 80 days and 20,093 shots – 6,093 over par – to make their way, unaided, across one of the most sparsely populated countries on the planet.

Mr Rolston teed off at 1am on June 27 from the base camp of Khüiten Peak, the highest and most western point in Mongolia.

As well as losing plenty of balls, dealing with unpredictable weather and the challenge of looking for food and water, he almost met a grisly fate when his 120kg golf cart got stuck in a swamp and nearly fell on him.

‘I got stuck around knee deep,’ he told the Telegraph, adding that his friend came to his rescue and the wheels got suctioned off the axles.

‘The heavy cart dropped down and almost chopped Ron’s foot off.’

Despite the hurdles, he managed to roll in the final seven-foot putt on the 18th green of the Mt Bogd Gold Club on the outskirts of the capital city of Ulaanbaatar on September 16.

‘This has been the hardest thing I’ve ever done in my life,’ Mr Rolston told the Telegraph afterwards. ‘I’m in awe of the fact we’ve done it.’ 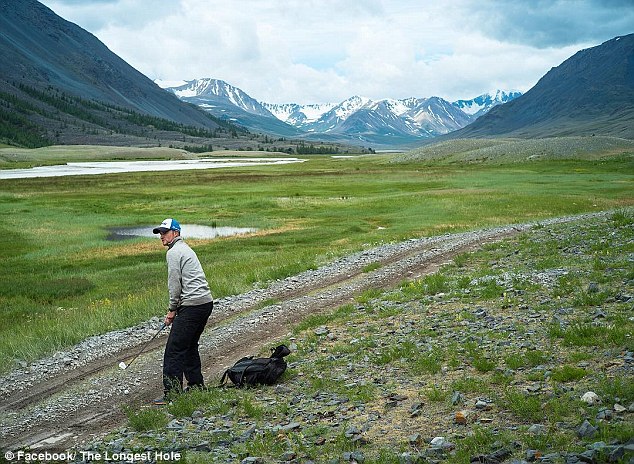 The challenge was thought up when he met up with Mr Rutland, from South Africa, in Kenya.

They talked about Mr Rutland’s previous charity adventure – when he cycled more than 16,000 miles through every country in Africa before ending in Brighton to watch South Africa face Japan in the 2015 rugby World Cup.

It was Mr Rolston who thought Mongolia would be a good place for a similar challenge but with golf – due to the fact that it is massive, but has few people and no fences.

He plotted the route and calculated that it would take 14,000 shots to complete, so set that as his par.