Adani gets nod on water plan

Amazing what the threat of losing power does for your political values: Queensland APPROVES the Adani mine – after voters slammed Labor for putting climate change ahead of 10,000 jobs

Adani has won the final approval it needs to construct its new coal mine in central Queensland after Bill Shorten’s refusal to endorse the mine saw the party suffer a massive swing against them at the federal election.

Queensland’s environment department has signed off on the company’s plan to manage groundwater on and around its Galilee basin mine site.

Adani promised an immediate start to construction once the last approval was in hand.

In a statement, the environment department said it had approved the most recent version of the plan, which Adani submitted just a day ago.

There was an electoral backlash in central Queensland against Labor for not approving the Adani mine . The final straw was a convoy of Greens through the region (above)

‘The (plan’s) assessment has been rigorous and based on the best available science.’

The approval commits Adani to additional measures to safeguard and monitor water sources.

Some water experts claim Adani has grossly underestimated the mine’s impacts on underground, and fear the effects of its permit to pump water out of the mine to allow for the safe extraction of coal.

They warned the mine could have a such a dramatic effect on groundwater levels that the ancient Doongmabulla Springs Complex, 8km from the edge of Adani’s mining lease, could permanently dry up.

That would spell death for the plant and animal species that rely on the springs for survival, one of those experts, Flinders University hydrogeology professor Adrian Werner said.

Prof Werner also warned of dire consequences for the Carmichael River which flows through the mine site, saying it would be cut off from its flood plain and could be robbed of groundwater that keeps the river flowing for much of the year.

Before Thursday’s decision, a former state government water chief said Adani’s plan would have irrefutable consequences for underground water sources in an area that’s heavily dependent on them. 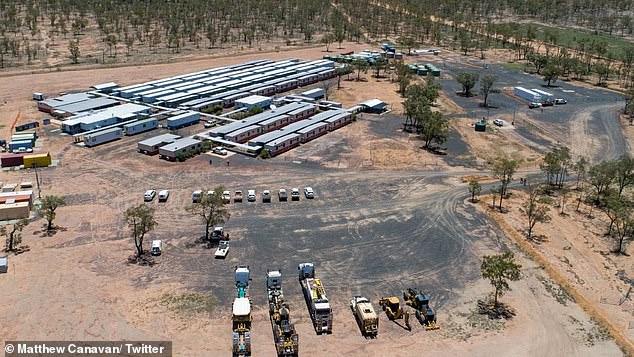 Tom Crothers is a former general manager for water allocation and planning in the Queensland Department of Environment and Resource Management.

Mr Crothers, who’s now a water policy consultant, said the state government had no clue what the cumulative impact would be if the Adani mine and eight others planned for the Galilee basin went ahead.

‘We’re looking at extraction of four Sydney Harbours out of underground systems. That’s a huge amount of water,’ he told ABC radio.

‘We see politicians put their hands on their hearts and tell Queenslanders that we’re managing our groundwater resources sustainably.’They don’t know … the Queensland government doesn’t have a clue what’s happening in terms of how underground water is being managed.’

Fighting for approval of the mine

Adani begins the approval process to establish two new mines and a rail line in the Galilee Basin.

Premier Anna Bligh declares it a ‘significant project’ which could generate more than 11,000 jobs.

Queensland’s coordinator-general approves the $16.5 billion mine and rail project subject to 190 conditions in May.

Federal Court rules in favour, in August, of a legal challenge by Mackay Conservation Group which says then Environment Minister Greg Hunt failed to take into account advice on the threatened reptiles.

The federal government re-approves mine, in October, subject to ’36 of the strictest conditions in Australian history’.

Queensland and federal governments give final approvals in December to a rail project associated with the mine.

Queensland rules out financial support for the Adani mine, in July, amid rumours the company is having trouble raising funds.

In the same month, experts warn the mine could put the endangered southern black-throated finch on a fast-track to extinction.

An Indian former environment minister, in October, criticises Australia’s decision to approve Adani’s coal mine saying its environmental track record “leaves a lot to be desired”.

In December, Premier Palaszczuk vetos a billion-dollar federal government loan to Adani for the construction of a rail line.