Addison Rae sparks backlash after posing in religious themed bikini: ‘So messed up’

Addison Rae sparks backlash after posing in ‘blasphemous’ religious themed bikini: ‘This is disrespectful to Jesus’

Addison Rae sparked backlash after posing in a religious bikini on Instagram.

The post, which has since been deleted, showed Addison, 21, wearing a bikini top which read ‘Father’ and ‘Son.’

The swimsuit, which is from the brand Praying and called the Holy Trinity Bikini, also comes with a set of bottoms branded with the words ‘Holy Spirit’, however Addison was only shown from the chest up in the image.

‘So messed up’: Addison Rae sent shockwaves after posing in a religious themed bikini

Page Six reports Addison received complimentary comments from the likes of photographer Mark ‘The Cobrasnake’ Hunter and Tate McRae, however she also was met with criticism over the outfit.

‘Nah this disrespectful to Jesus. Sad what y’all do for money,’ an Instagram user commented, according to Page Six.

‘This is not okay! BLASPHEMY!’ remarked another.

‘Is nobody gonna talk about this disrespecting religions,’ posted another. 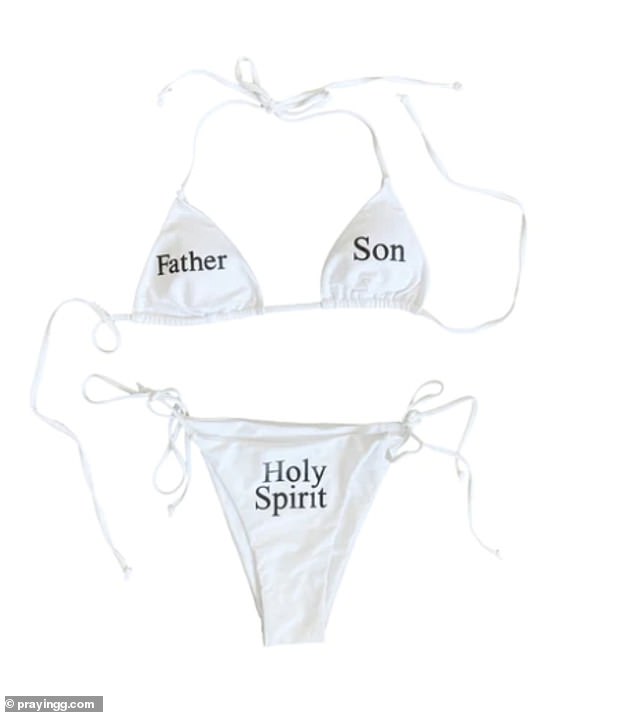 Called out: The bikini from Praying costs $100 and a similar version of the same swimsuit was recently worn by Christina Aguilera 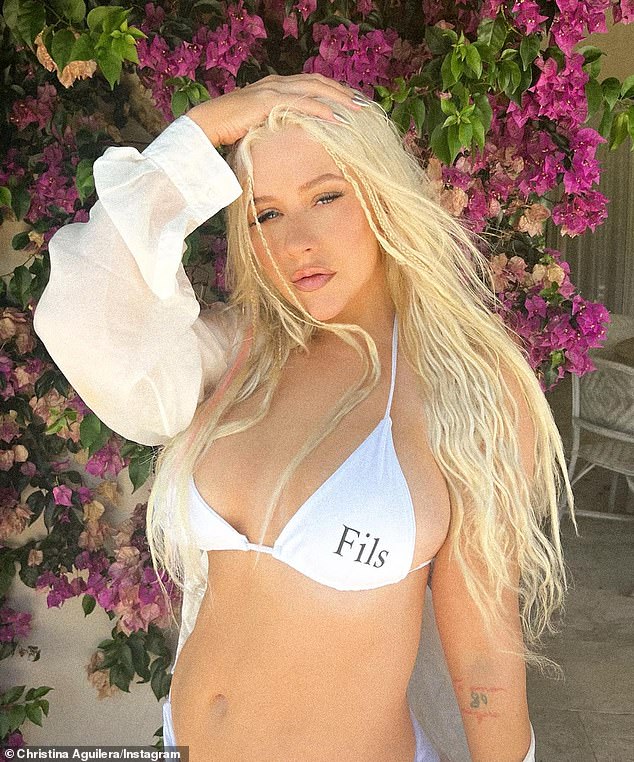 Same but different: Aguilera wore a French version of the religious swimsuit

‘So messed up,’ another chimed in.

The bikini from Praying costs $100 and Christina Aguilera recently wore a French version of the religious swimsuit. Hers read ‘Pere, Fils, Saint Esprit.’

Addison is no stranger to sharing swimsuit snaps, and on Monday modeled a polka dot bikini top and color-coordinated bottoms.

The social media mogul put on a busty display as she modeled the pieces, which were from Emily Ratajkowski’s Inamorata swimwear line. 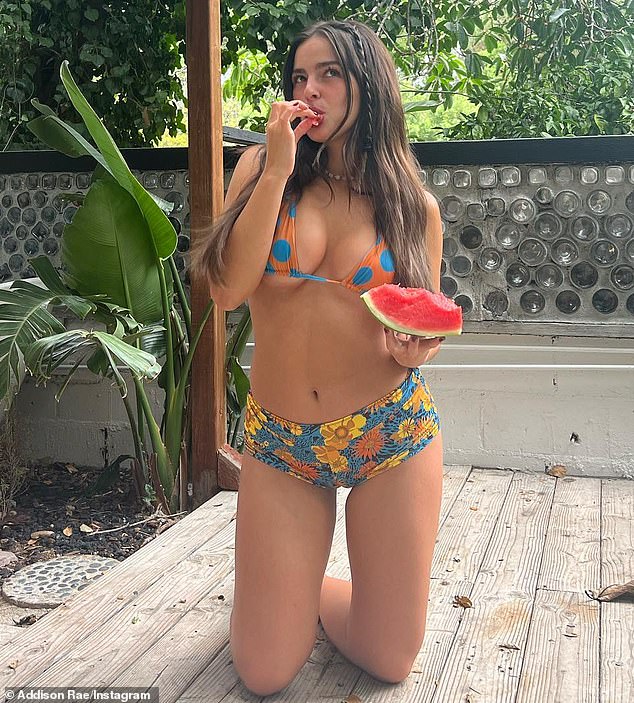 She teased in the caption: ‘Sugar, spice, and everything nice.’

The TikTok sensation posed outdoors on a wood patio while holding a big piece of watermelon.

Addison revealed her perky cleavage as well as a bit of underboob as she put on a flirty display for her 40.2 million followers.

She gained over one million likes from her loyal fans as she bared her curvaceous figure in floral-patterned boy shorts.

Rae flaunted her flat midriff in the orange, blue and yellow swimsuit from the brand’s latest collection. 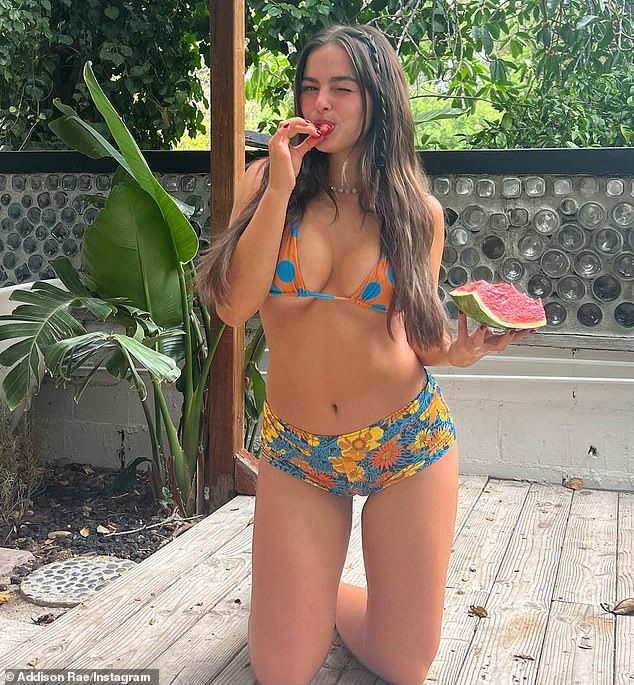 Yum! The TikTok sensation posed outdoors on a wood patio while holding a big piece of watermelon

Her long and luscious locks spilled down her back and over her chest, stretching down to her waist.

She incorporated a small braid near the front and wore a clear beaded necklace around her neck.

The superstar, who counts Kourtney Kardashian as a mentor, nibbled on the refreshing fruit as her photos were taken.

The influencer donned a short, deep red manicure as she knelt with green shrubbery in the background. 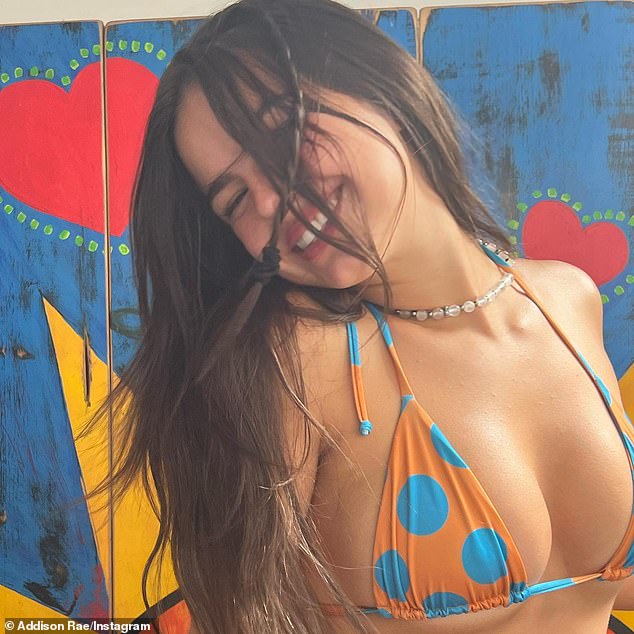 Flirty! She teased in the caption: ‘Sugar, spice, and everything nice’

In a third image from the abbreviated slideshow she shared a closeup photo flashing a toothy grin.

Her hair partially covered her makeup-free face and there was a blue painting with red hearts set behind her.

Emily reposted the upload in her Instagram Stories and wrote ‘dream girl’ in a blue font. 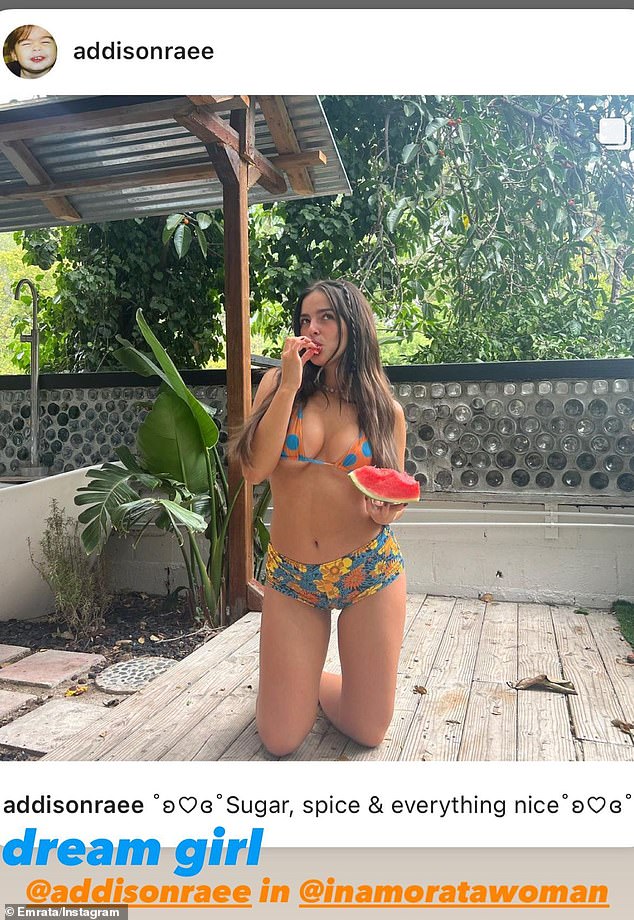 Repost: Emily reposted the upload in her Instagram Stories and wrote ‘dream girl’ in a blue font