Adelaide blasted by their OWN club director! Mark Ricciuto claims stars are failing in all areas

Adelaide are blasted by their OWN club director! Mark Ricciuto claims stars ‘can’t kick, can’t handball and can’t kick a goal’ in withering spray after Crows’ horror start to the season

The struggling Adelaide Crows have been blasted by their own football director Mark Ricciuto.

In a spray for the ages, the premiership winner and club great declared the current playing group ‘can’t kick, can’t handball and can’t kick a goal’.

The scathing criticism following defeats against Fremantle and Collingwood, which Ricciuto, who won the Brownlow Medal in 2003, labelled ‘garbage.’

‘At the moment their skill levels are just shocking. Handballing, kicking, goalkicking, giving away free kicks, it’s really, from what I can see, it’s as bad as they can play,’ Ricciuto said on Triple M Adelaide.

‘Just go back to the basics…just dumb it down. They really can’t do anything worse.’

The struggling Adelaide Crows have been blasted by their own football director Mark Ricciuto (pictured right, with former SA Premier Steven Marshall) 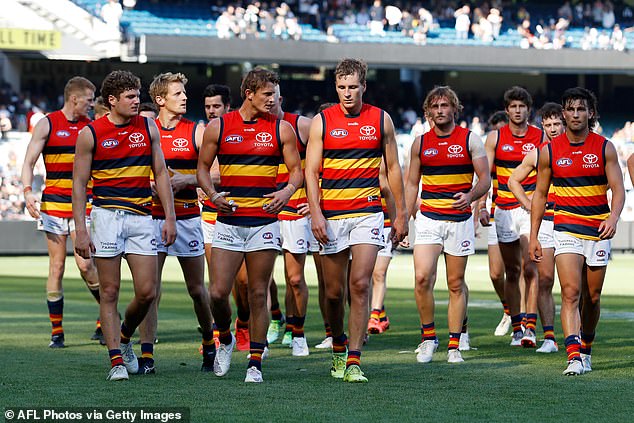 Fellow AFL commentator Kane Cornes also fears the Crows are in for a long season.

He said if the players aren’t fired up by Ricciuto’s criticism, serious questions need to be asked.

Cornes added that if the players ‘can’t execute the basic fundamentals of the game, it will be a campaign to forget.’

Both squads are yet to chalk up victories in 2022, with the Power hammered by Hawthorn last start in a match they were widely expected to win.

In round one they lost to premiership heavyweights Brisbane by 11 points.

Special focus this week has been placed on winning aerial contests, a key facet the Power were seriously lacking versus the Hawks.