Thousands line up for a sniff of the world’s STINKIEST flower – which reeks of rotting flesh, off cheese AND dead fish

A rare ‘corpse flower’ in bloom is drawing thousands of visitors keen to take a sniff of the bizarre plant’s distinctive rotting flesh smell.

The Adelaide Botanic Gardens, South Australia, has been flooded with visitors after its rare Titum Arum bloomed overnight on Sunday.

The Amorphophallus titanum takes 10 years to grow from a seed and releases a putrid odour when it reaches peak bloom.

It only blooms every three to five years thereafter. 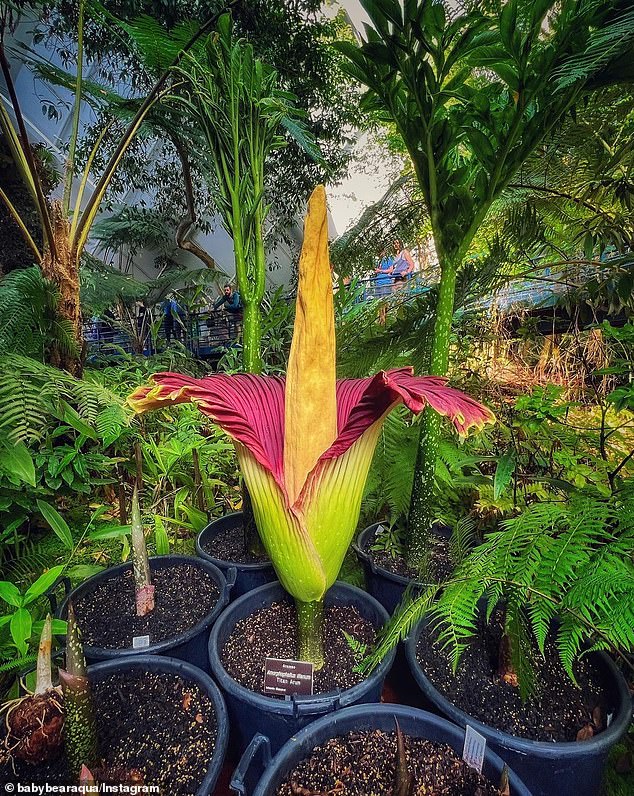 The Amorphophallus titanum is known as the corpse flower due to its foul-smelling odour, which has been likened to rotting flesh and fermented cheese

The foul smell is designed to attract carrion flies to its impressive flower for pollination by imitating the stench of a dead animal.

The Botanic Gardens said the flower started to open at 2pm on Sunday and was completely open and releasing its infamous smell by 5pm.

Horticultural curator at the gardens Matt Coulter explained the flower reaches its peak stench in the first 24 hours of flowering and usually wilts within 48 hours.

‘It was amazing to be able to show the public what an amazing plant this is,’ Mr Coulter told the ABC.

‘Other than the smell it is actually an incredibly beautiful plant. It only smells for two days. So basically it’s a 24-to-48-hour period that it’ll look its best.’ 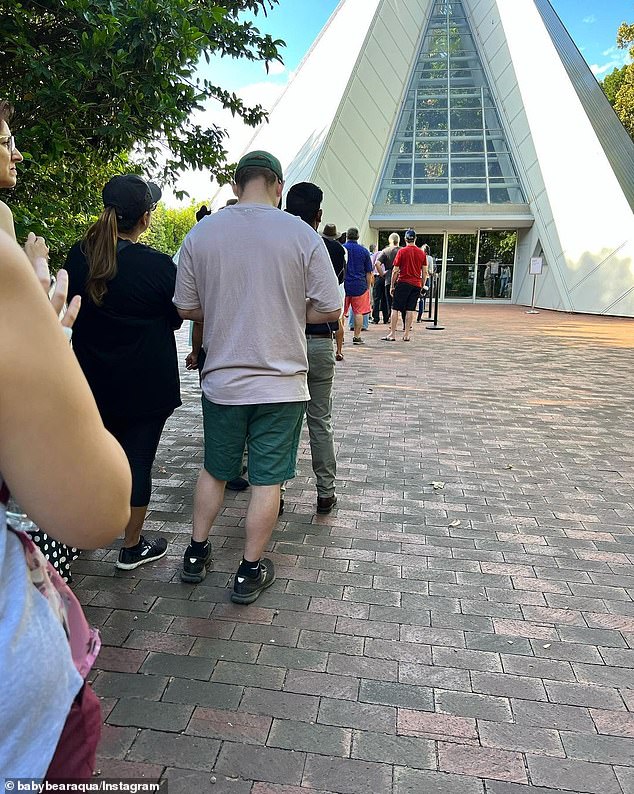 Over 1,500 people waited in queues on Sunday, with many waiting for over an hour to catch a glimpse and whiff of the rare flower (pictured) 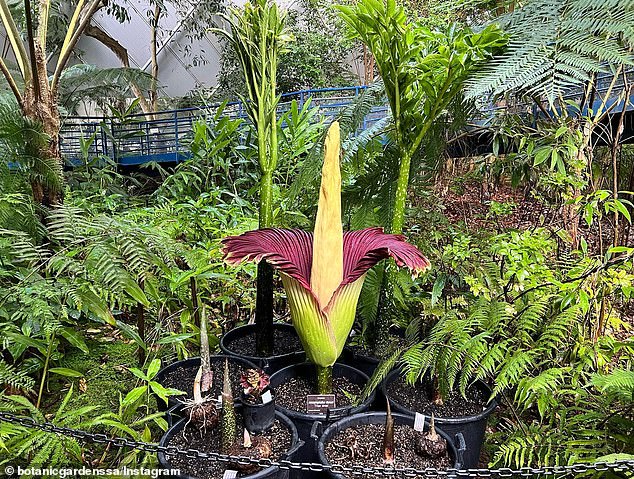 The flower (pictured) peaks in the first 24 hours of its bloom and usually withers away within 48 hours. It is believed there are fewer than 1,000 individual plants left in the wild

The horticulturalist said the plant smells stronger from a distance as the malodour pulses from the flower – much like an air freshener.

‘It has this real dead rat sort of smell, but also [smells like] fermentation, rotten cheese.

‘A lot of people think it smells like dead fish, it has real complex aromas — it’s very fascinating,’ he said.

This particular plant was propagated from leaf cuttings from an already established Titum arum and produced a smaller – 1.5metre – but ‘no less smelly flower’ than previous years.

The Adelaide Botanic Gardens has grown a number of corpse flowers, with some flowering in 2016 and 2017, as part of a global conservation effort to protect the rare and endangered species.

The corpse flower is native to the rainforests of Western Sumatra, Indonesia, and is listed as endangered on the International Union for Conservations of Nature’s (IUCN) Red List of Threatened Plants.

It is believed there are fewer than 1,000 individual plants left in the wild.

The repulsive stench of the ‘corpse flower’

The Amorphophallus titanum is commonly known as the ‘Corpse flower’ due to the repulsive odour of rotting flesh it emits when in bloom.

It is also the largest unbranched inflorescence in the world.

The plants corm – the vertical, fleshy, underground stem that acts as a food-storage structure – is the largest in the world weighing up to 100kg

The flower takes 10 years to grow from seed and blooms every three to five years thereafter.

The smell of the flowering Titan Arum has been likened to rotting flesh or pungent blue cheese.

The smell is prominent in the first 24 hours, when the flower reaches peak bloom.

The flower and its foul-smell withers within 48 hours.

The scent is designed to attract attract carrion flies to its impressive flower for pollination.

It is believed there a fewer than 1,000 individual plants left in the wild