An Australian ghost hunting couple have revealed what it is like chasing paranormal activity – and how the ghost of a little boy who didn’t know he was dead brought them both to tears.

Heather Eckermann, 45, and her partner Werner Schubert, 49, from the South Australian state capital of Adelaide have been hunting ghosts together for more than a decade, but still find their encounters chilling.

The dedicated couple told Daily Mail Australia they have seen and spoken to many ghosts but it took a little boy called Ben who didn’t know he was dead to bring them undone.

Heather Eckermann, 45, and her partner Werner Schubert, 49, from Adelaide, both pictured, are ghost hunters 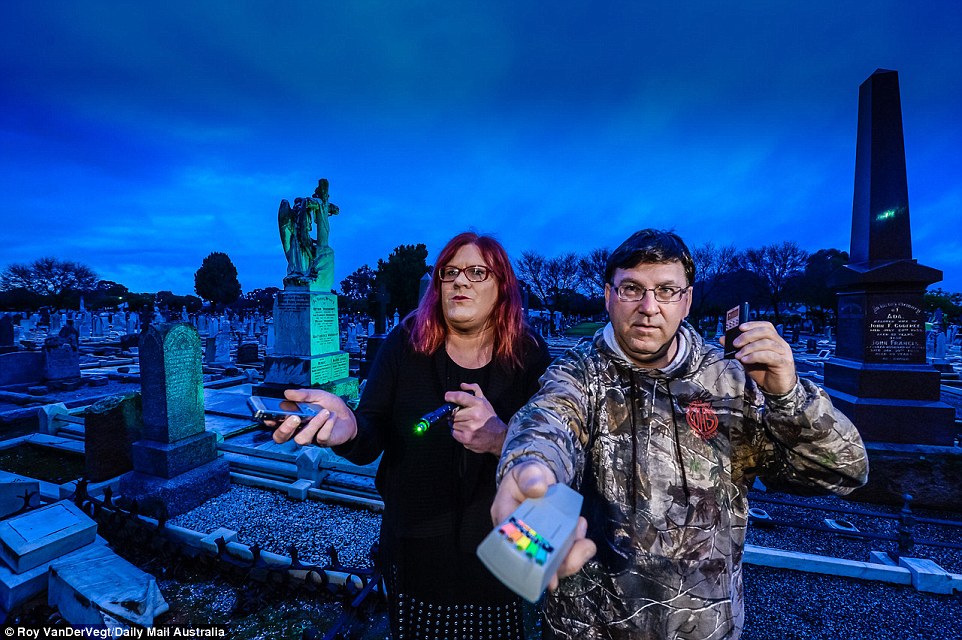 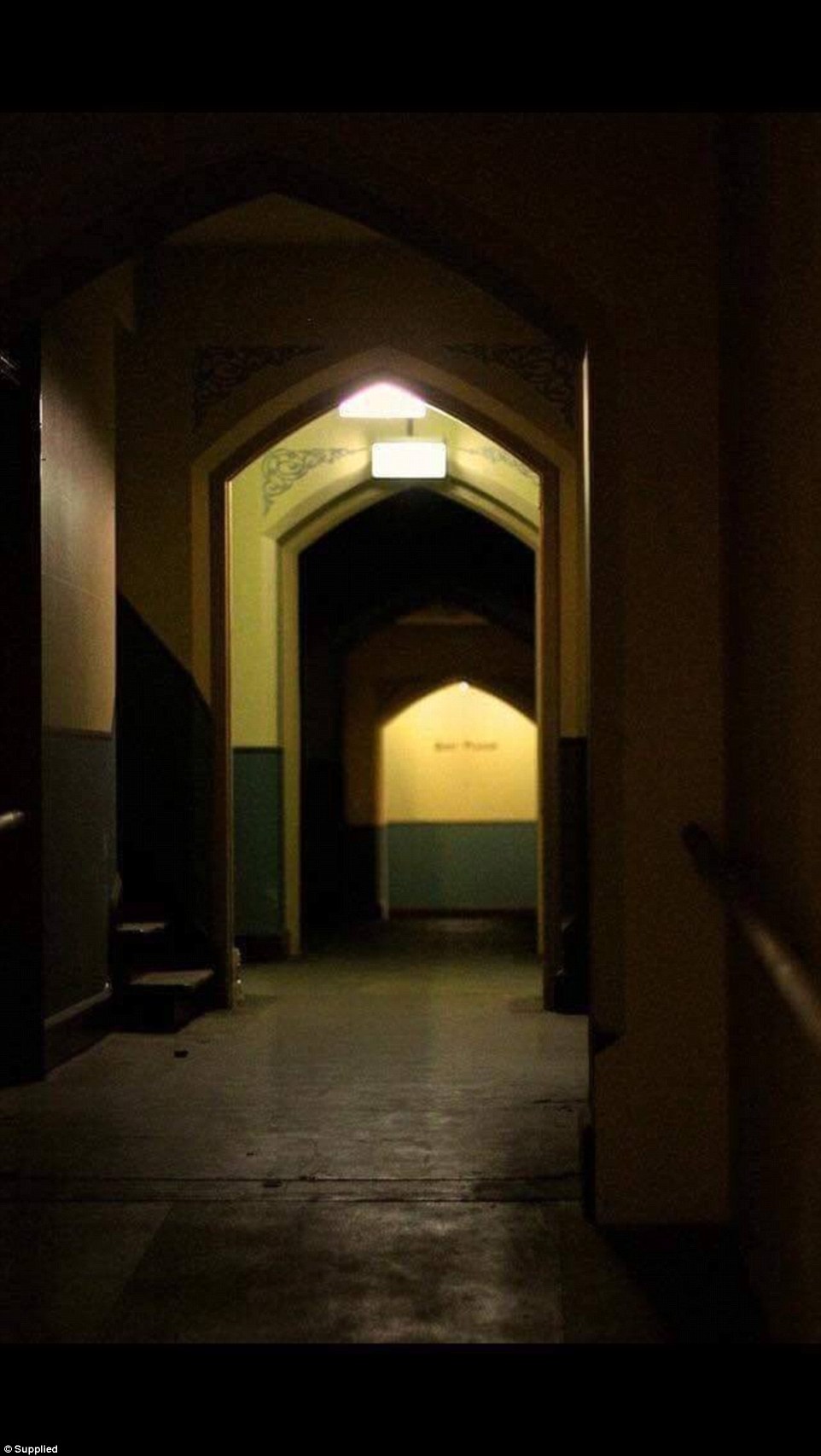 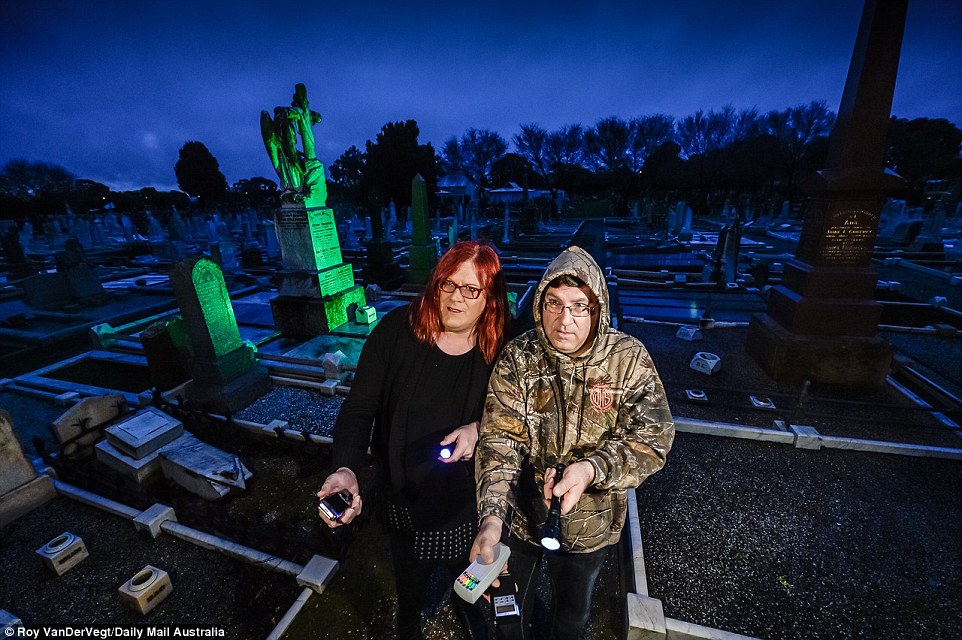 The couple, pictured here, have high-tech ghost hunting gear to help them connect with spirits including red and green lights

‘I can’t pinpoint what it was about him, whether it was his age or if he had died in some tragic accident but he had me in tears,’ Heather said.

‘He was about five or six and spoke to us about how he was starting school soon and was excited to go shopping for some new shoes.

Werner claims he went back to the same cemetery weeks later and the young boy was still waiting there, excitedly chatting about going to get new shoes the next day.

‘He even asked where Heather was, he remembered her,’ Werner said.

Werner has been ghost hunting since 2004. His mother passed away that year and had been a ghost hunter for as long as he could remember so he decided to pick up where she had left off.

When he met Heather in 2009 he shared his passion with her and they have been hunting for spirits across Australia and the world ever since.

‘We spend a lot of time in the Adelaide hills and Barossa Valley, but have been to Queensland and across America too,’ he said. 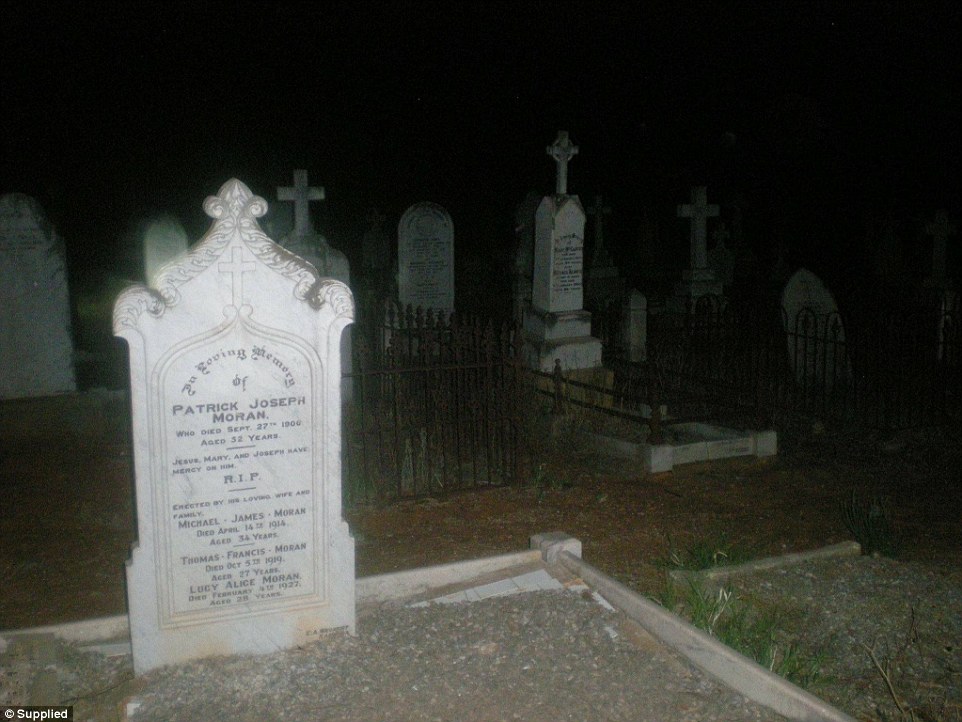 The ‘energy’ from a possible spirit can be seen in this image, according to Heather, who claims the fact only one section is out of focus proves there was something there 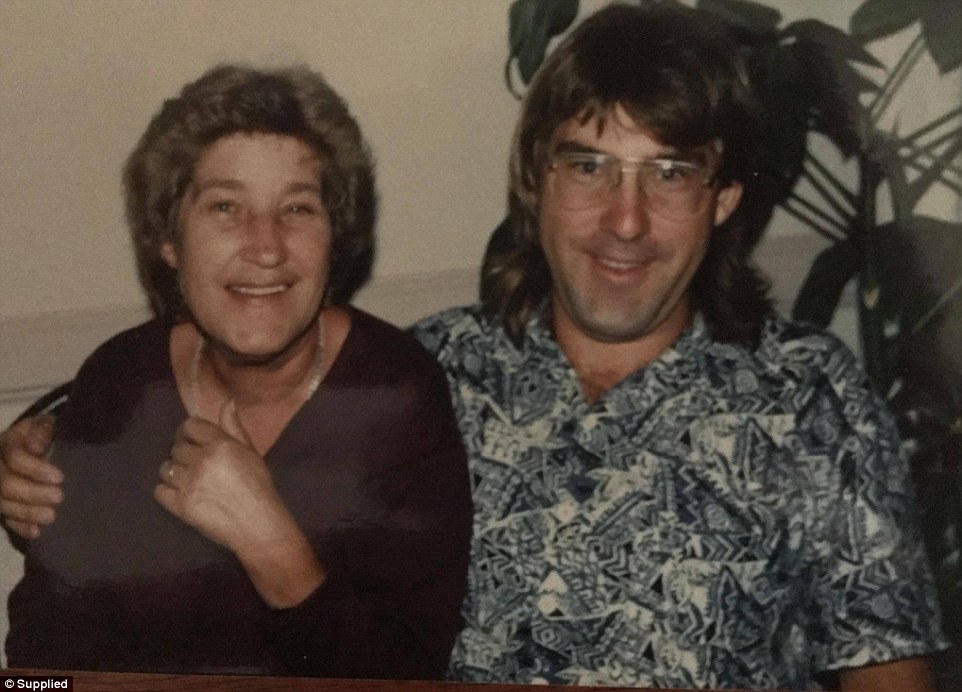 Werner, pictured here alongside his mother who died in 2004, his mother was a ghost hunter. Werner took over from her when she passed over 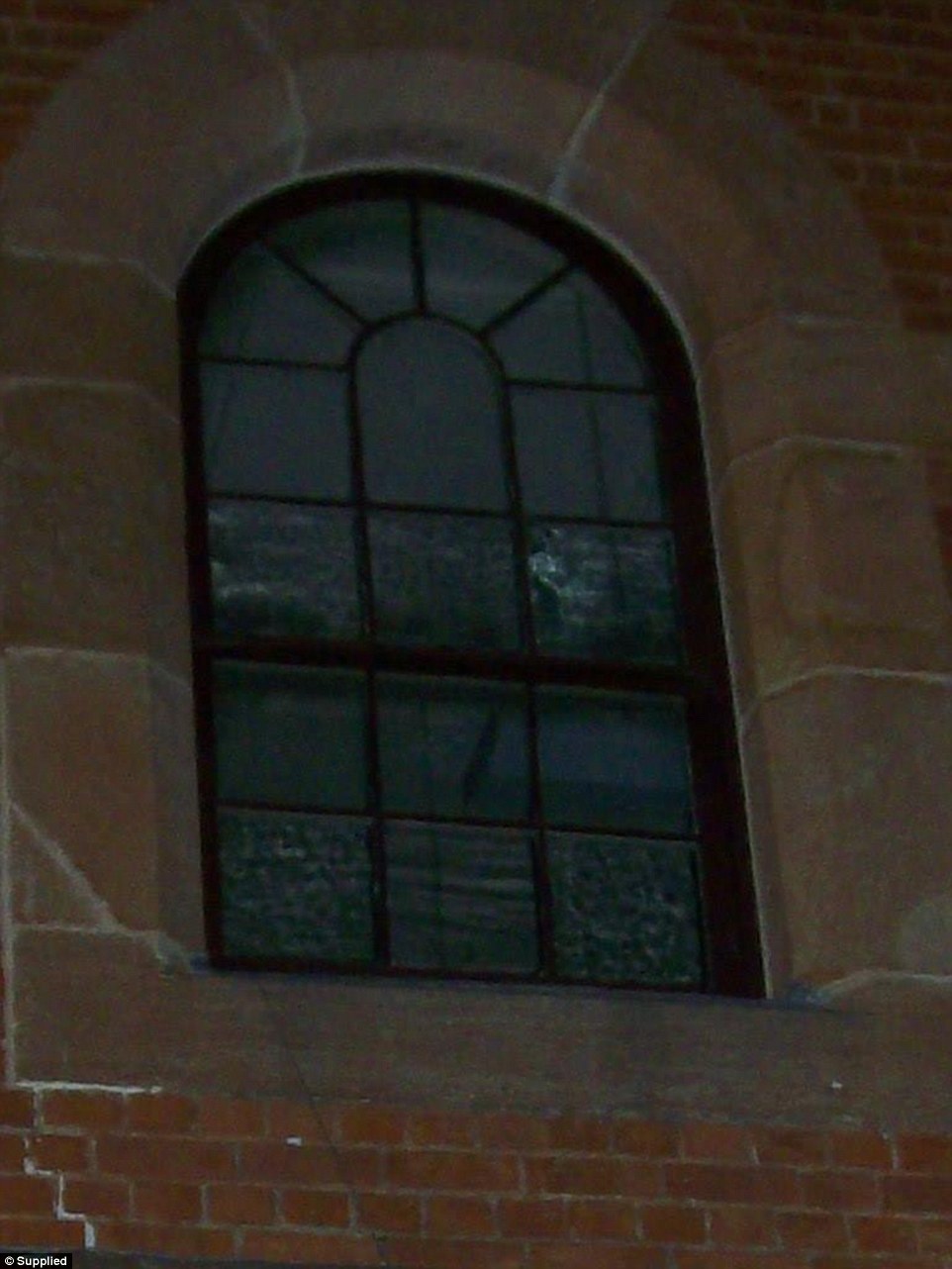 The couple say there is a ghost in this picture, smoking a pipe in the window. The man appears to be leaning back side-on to the camera

But the couple soon admitted they don’t even need to leave the comfort of their own home to catch up with ghosts.

‘We have a ghost here who comes and goes, I think it is a man but don’t know for sure,’ Heather said.

‘One day Werner was talking to me while I was in the shower and we heard the front door open and close like someone had let themselves in but there was no one there.

‘Then one day Werner was playing the keyboard while I was in bed and he saw a shadow pass across the wall and called out to see if I had been up.

‘Another time we were just sitting in bed and the lights started flicking off and on and then we just felt so drained for weeks afterwards.’ 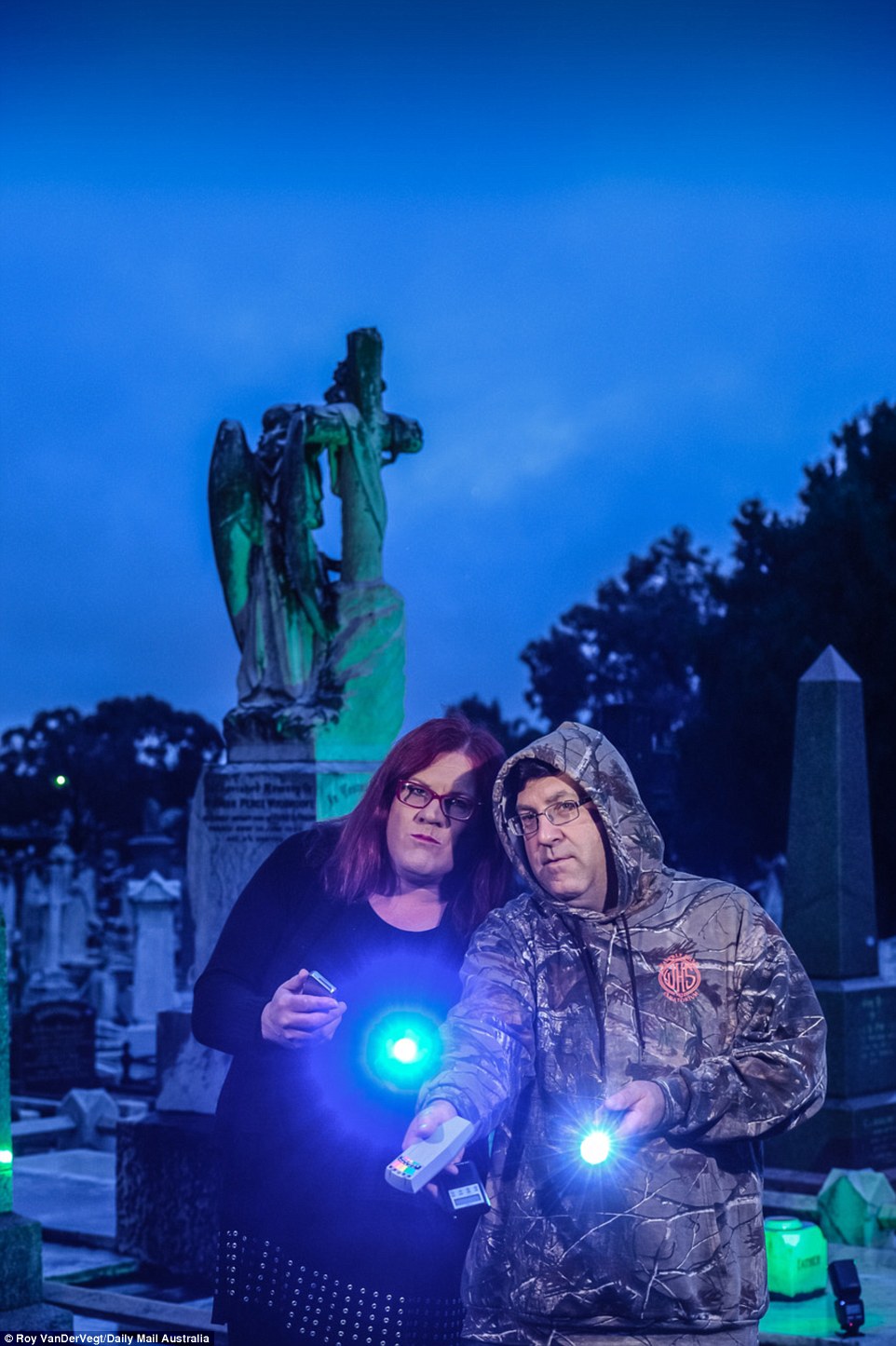 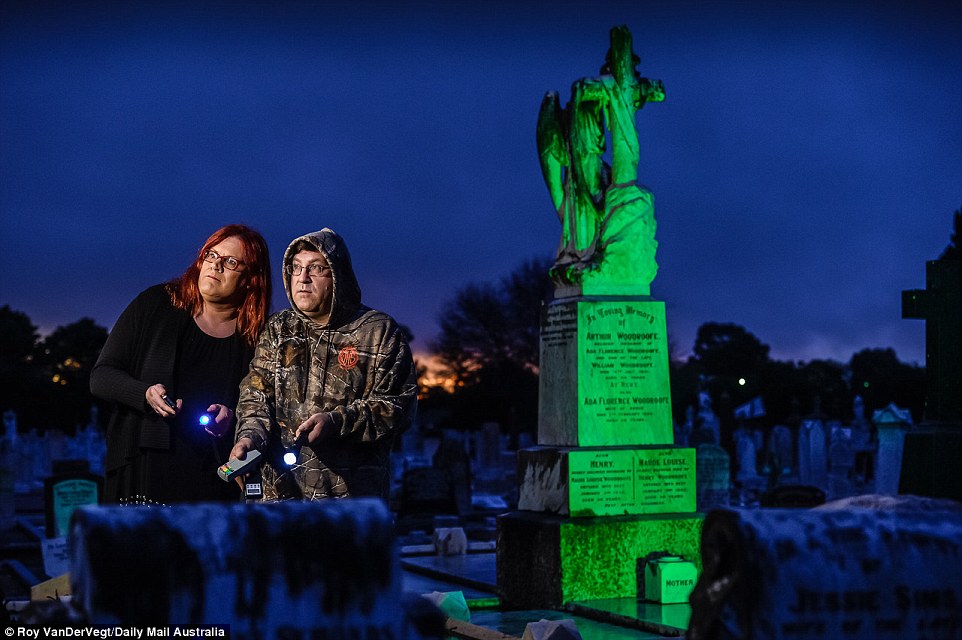 The couple have a ghost living in their Adelaide home, and often see him in the driveway, they say he also plays with the lights 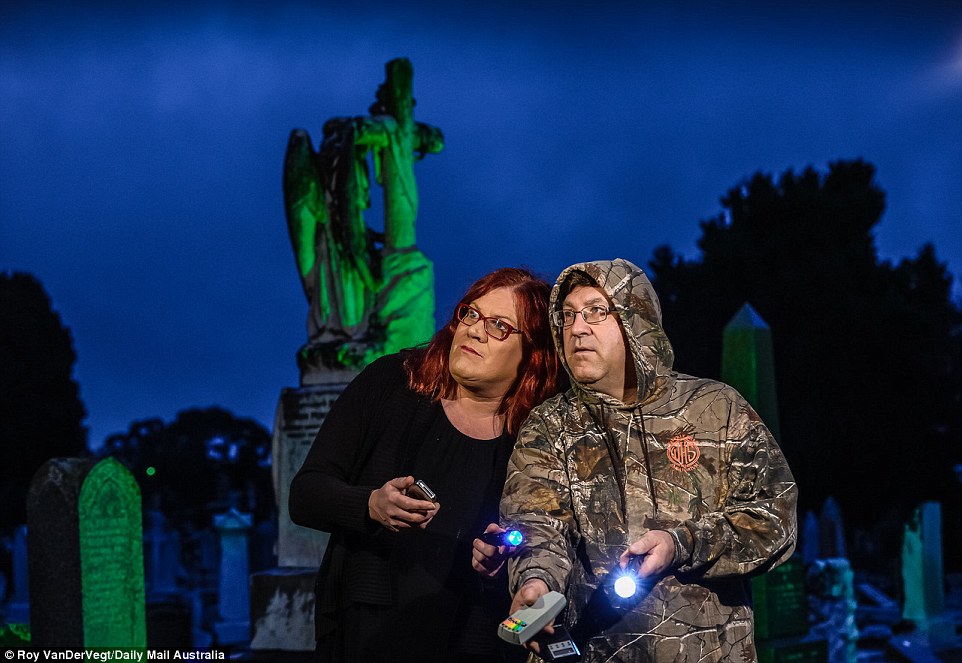 The couple said they often see the ghost heading up the driveway but try not to put everything that happens in the house down to the paranormal.

The couple agree that Saint John’s cemetery in Cupunga in the Barossa Valley has been home to one of their creepiest experiences.

‘We have a ghost box which is what we use to speak to the ghosts,’ Werner said.

‘This day we all felt something at the cemetery then when we plugged the ghost box into the stereo of the car on the way home we heard strange whispers.

‘The whispers were quiet but clear. The spirits were saying ‘death’. It was very, very, very creepy.’ 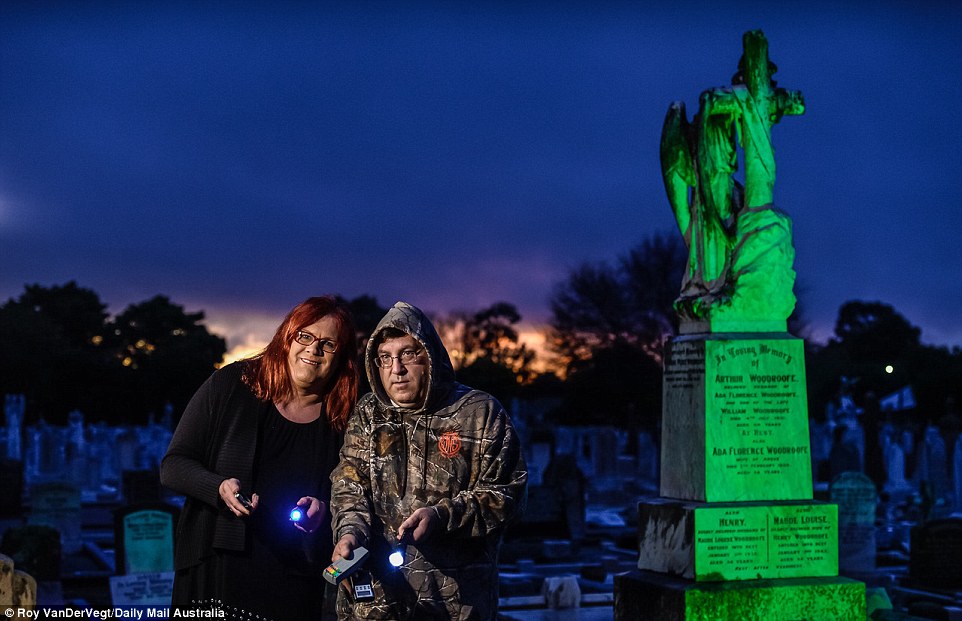 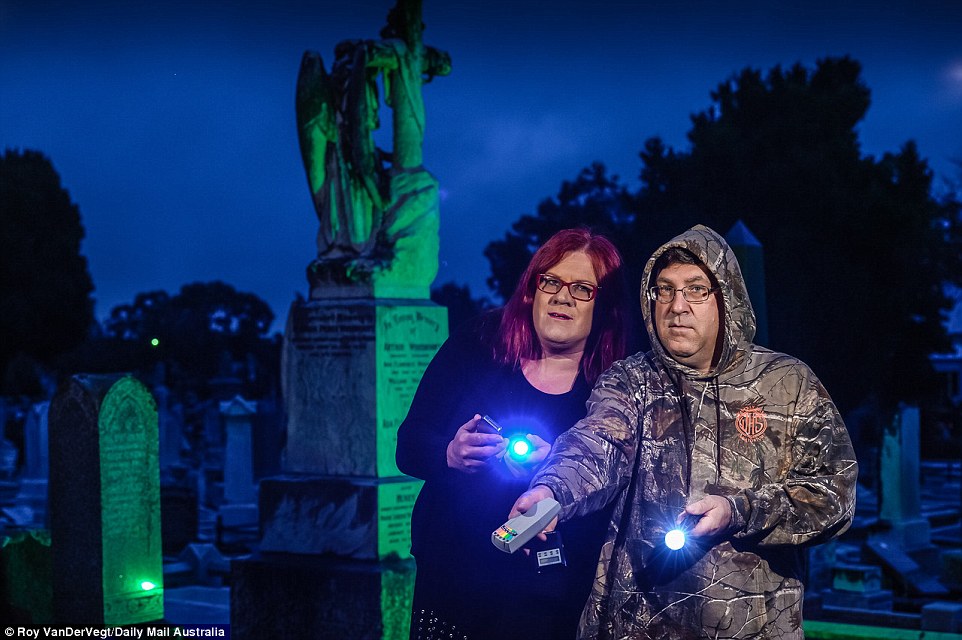 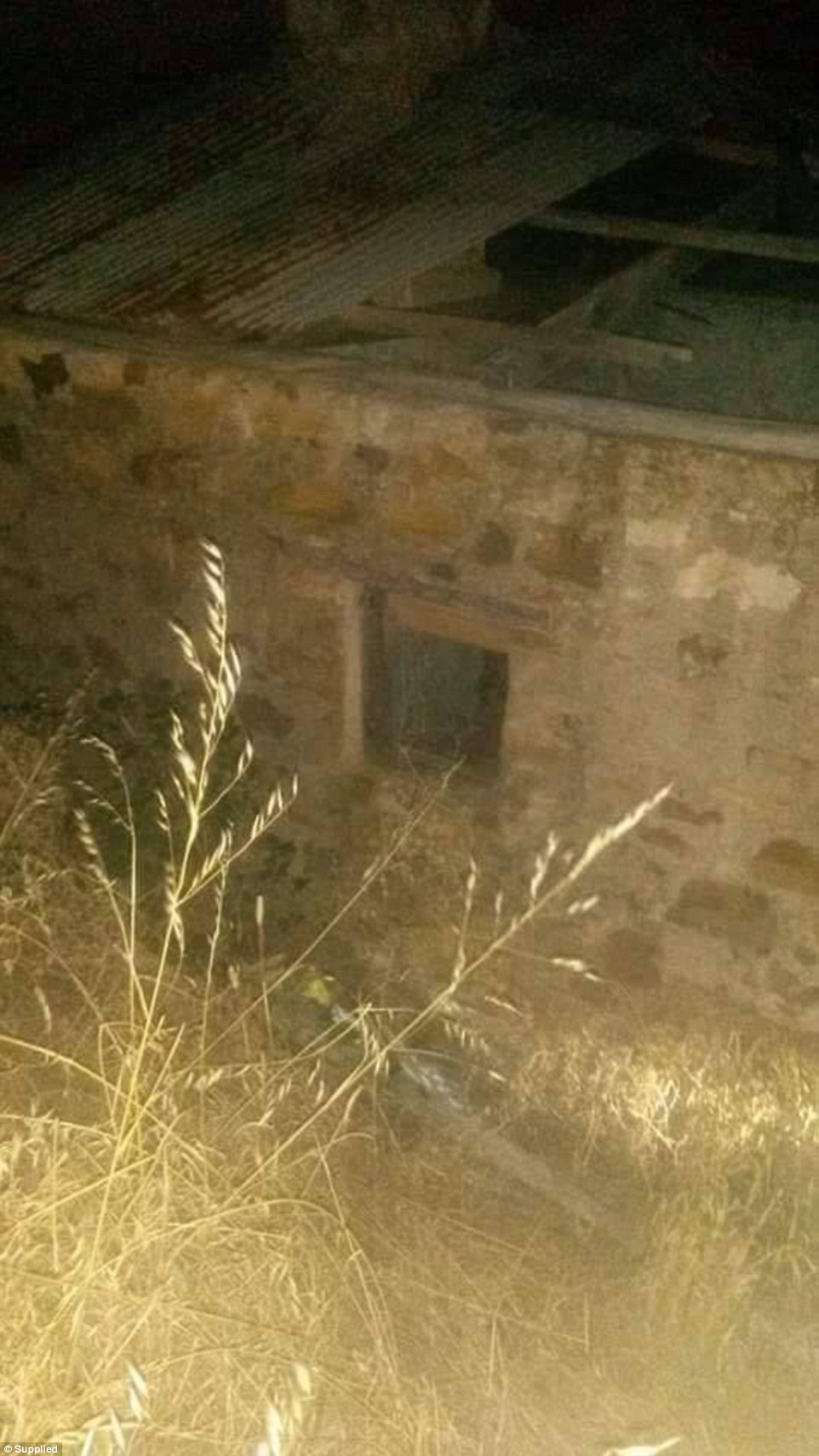 They claim this picture shows the ghost of a little girl – sitting in the window. The house is abandoned and damaged

In Williamstown in the Adelaide Hills the couple claim to have watched a small child playing.

That day when Werner got home Heather noticed he wasn’t ‘his usual self’.

‘He was sleep walking and he never normally does that, I am not sure if he was asleep or if the spirit had taken over his body,’ Heather said.

Werner believes the ghost of an old miner had attached itself to him.

‘I don’t think it was the ghost of the child, it was irritable, it made me irritable,’ he said. 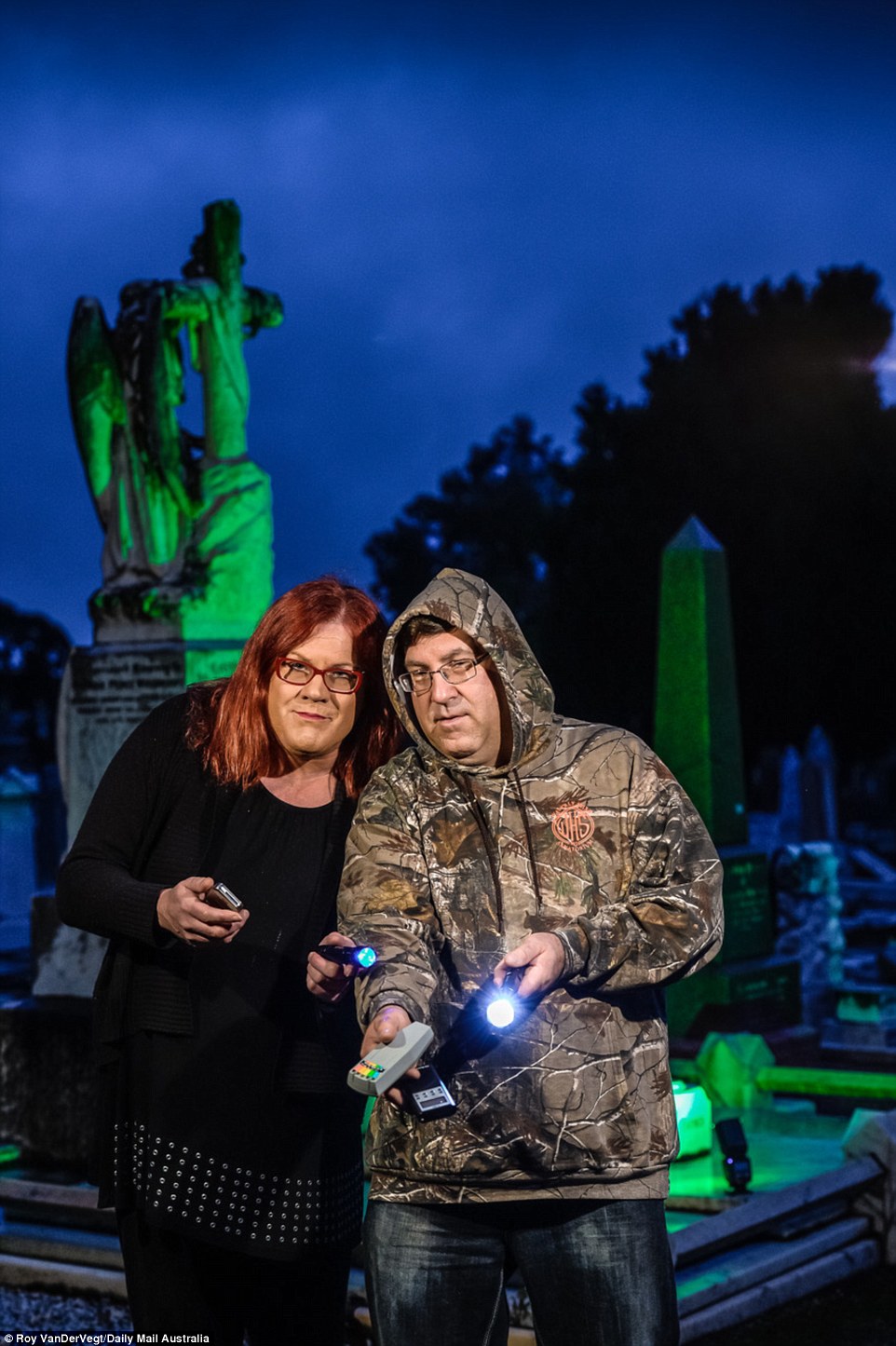 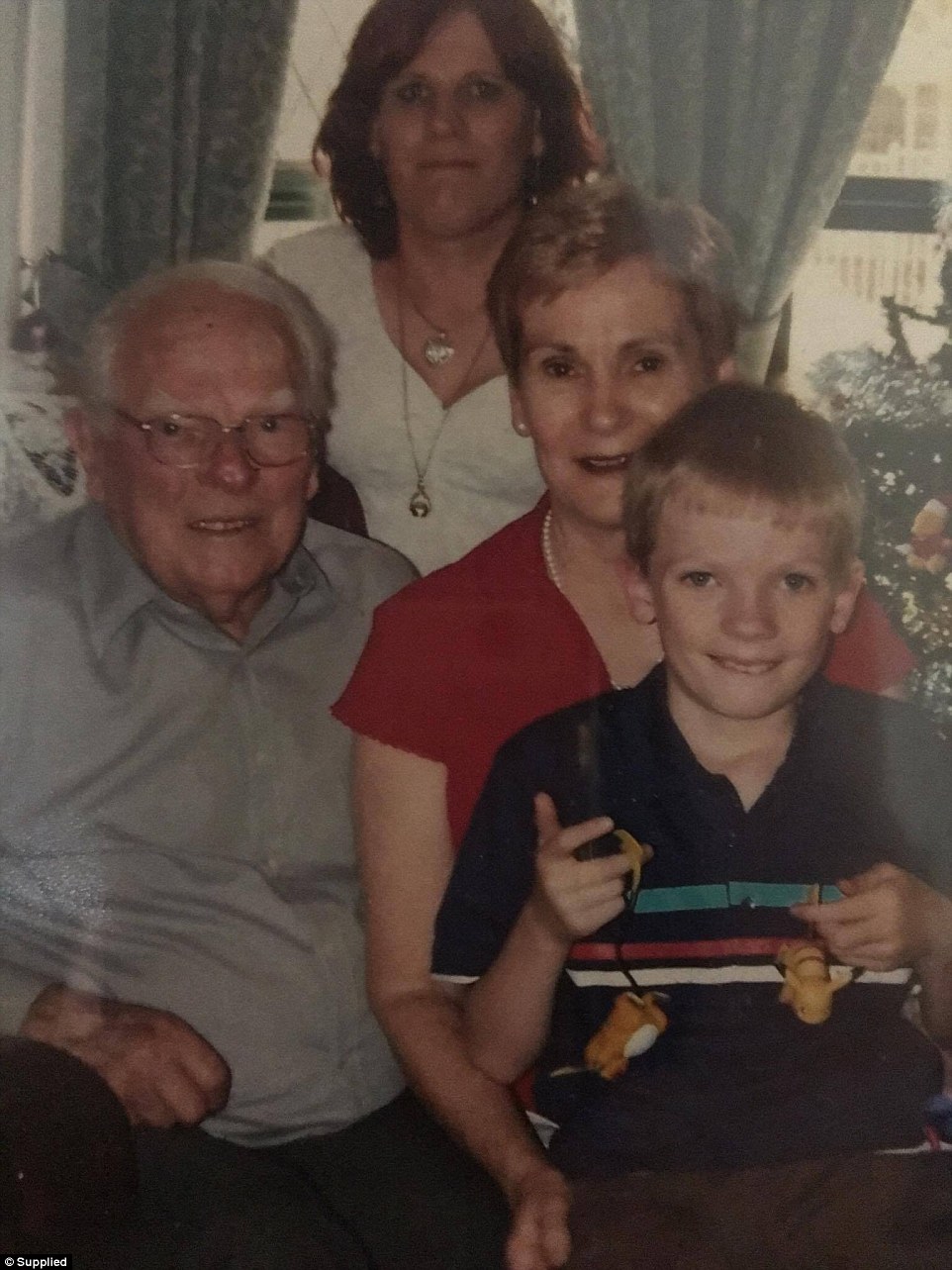 Heather, pictured here with her family, claims she has spoken with her father since becoming a ghost hunter

‘After two weeks of not feeling quite right I went back up there and yelled at the ghost to go home.

‘It did. I had a vision of an old man in a white singlet and a scruffy hat washing something in the river which used to run through the area.

‘I reckon he was the one who had come home with me.’

The couple don’t get paid for their paranormal investigation – preferring to keep it as a hobby.

They often hunt in packs with other local ghost experts and are always upgrading their gear to get the most out of each experience.

The couple want to want amateur hunters that it is a dangerous past time and not all ghosts are friendly. 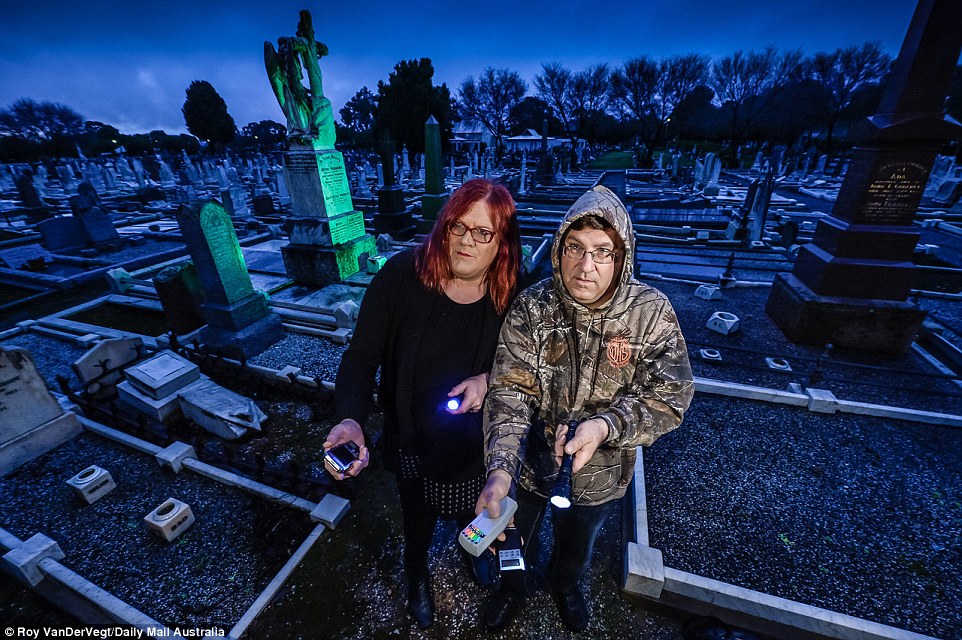 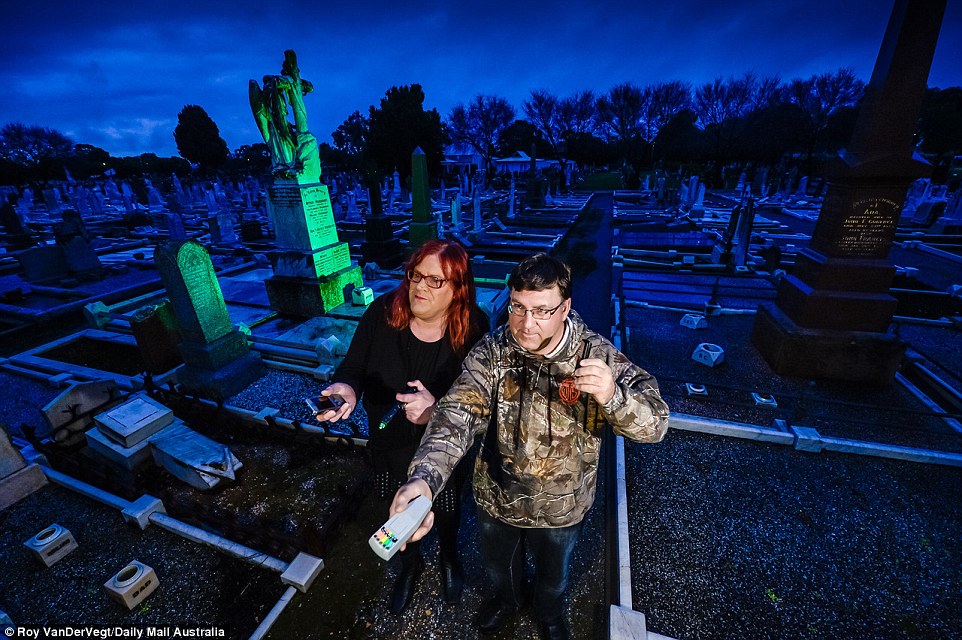