Footage of a ute rear-ending a stopped vehicle at a busy intersection has sparked a heated debate online over who was at fault.

The car slows to a halt and waits in the queue of traffic ahead of the intersection at Main North Road.

A ute comes up from behind the stopped car and bumps into the rear of the vehicle.

A Ute has been caught on camera rear ending a stopped vehicle at a busy intersection, dividing drivers on who is at fault 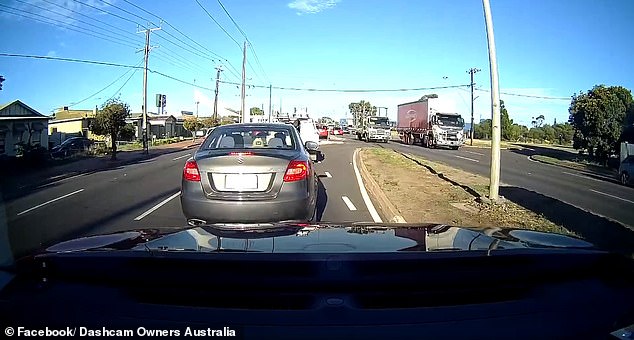 Dashcam footage captured the moment the Ute ran into the back of the car along Grand Junction Road, in Adelaide, last Wednesday

The car is sent rolling forward before it crashes into the silver sedan waiting in front of it.

Video of the crash was uploaded to Facebook where it divided social media users on who was in the wrong.

One person suggested the driver in the stopped vehicle was to blame.

‘DC driver at fault,’ they said.

‘Should have left more room for car in front in the event of being struck from the rear.’

Other social media users were quick to jump to the driver’s defence and shifted blame to the ute.

‘Are you joking? there was a lot of space in front. Watch it properly,’ one person said.