‘His chest wasn’t moving, I felt his forehead – he was cold’: Father relives shattering moment he woke to find his ‘happy and healthy’ baby boy dead beside him in bed – and his frantic fight to save him

A grieving father has relived the unimaginable moment he woke to find his four-month-old son dead beside him in bed.

The ‘happy and healthy’ baby was sleeping in Mr Ward’s bed with him on Friday night, while Mrs Ward was in hospital having surgery.

Mr Ward’s world came crashing down on Saturday morning, when he woke beside his son’s lifeless body.

‘That morning I woke up as usual, opened my eyes, looked at him and saw his chest wasn’t moving,’ he told Daily Mail Australia. 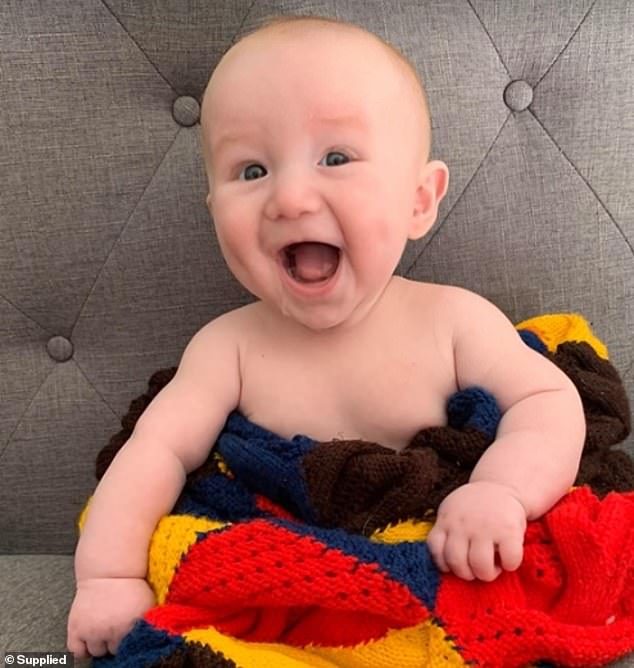 ‘I don’t think it quite clicked at that point. But I then felt his forehead and it was cold. I picked him up and he wasn’t responding – I screamed ”bubba” three times.’

Mr Ward frantically ran to his mother-in-law’s room to get help, before calling an ambulance who ran him through the steps for performing CPR.

‘I tried to resuscitate him for about two minutes which happened to feel like a lifetime.’ 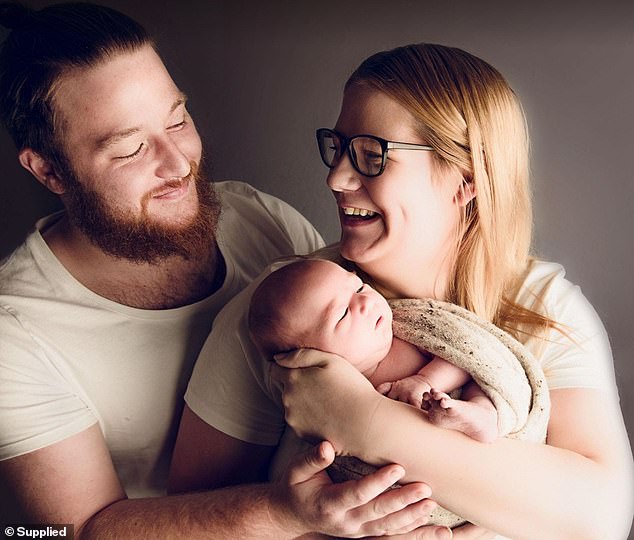 The heartbroken parents still aren’t sure exactly what caused Bronlee’s death, as the Coroner’s report found the reason for his death inconclusive 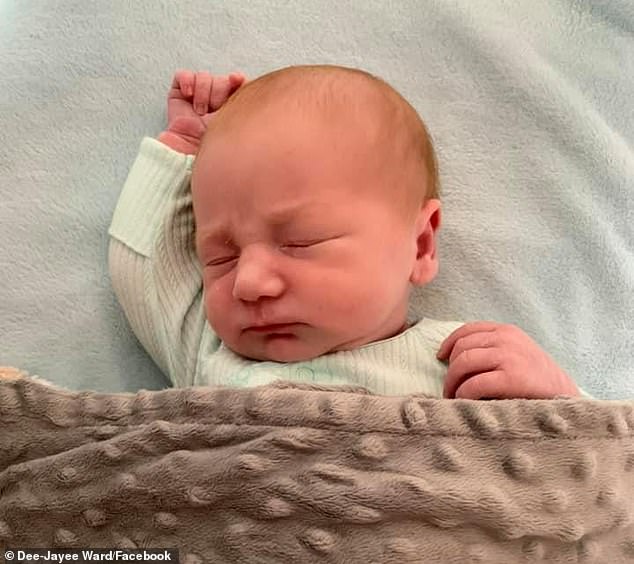 ‘He was extremely happy as well, the first thing he did every morning was smile and the last thing before bed he was laughing and smiling,’ she said.

Mrs Ward said she received the devastating news while she was still in hospital.

‘I just walked into the room and saw my mum and Jayden crying and my first thought was ”where’s Bronlee, what’s wrong?” But I still didn’t think he was gone,’ she said.

‘But when they told me the words ”I’m sorry” I just knew. I dropped to the floor and kept saying ”no, no, no” repeatedly.’

Mrs Ward immediately packed up her things and left hospital as fast as she could. 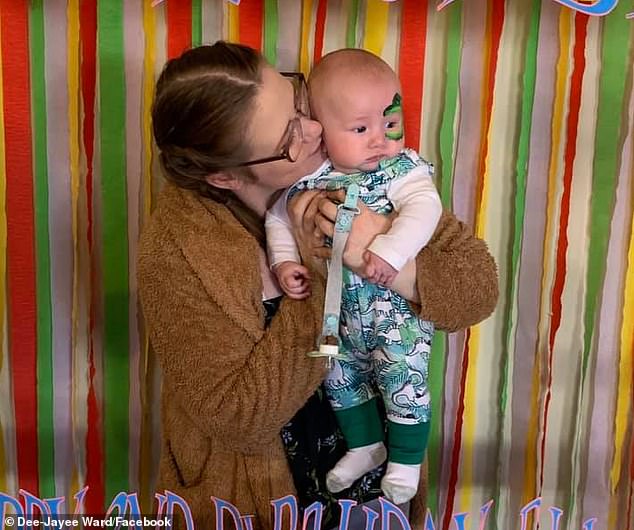 ‘It was the worst day of my life. And I want no never go through the and we want no one else to go through that as well,’ she said.

The heartbroken parents still aren’t sure exactly what caused Bronlee’s death, as the Coroner’s report found the reason for his death inconclusive.

The couple is now hoping to raise awareness for SIDS.

‘If we can raise enough awareness to even just help prevent one family from going through what we’re going through right now… that would be amazing,’ Mr Ward said.

The couple is urging parents of newborns to do their research to reduce the chances of the same tragedy happening to them. 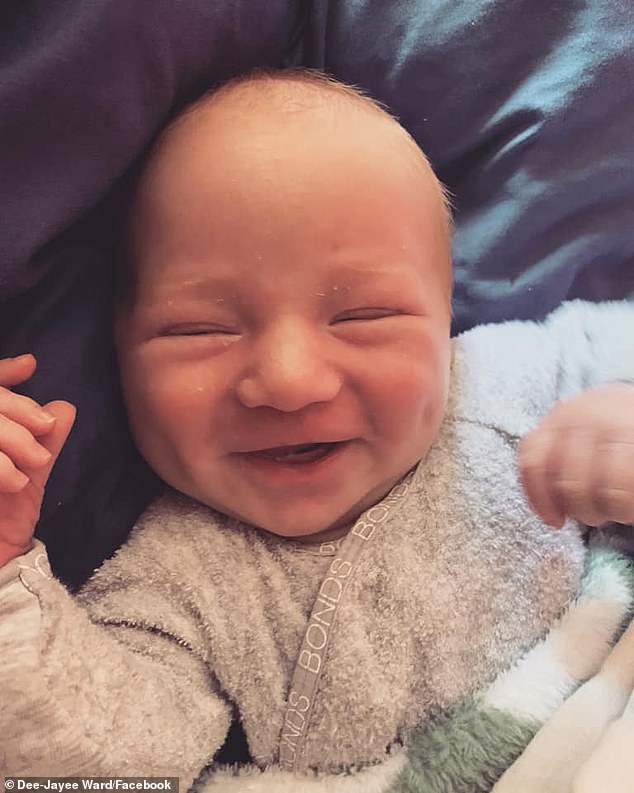 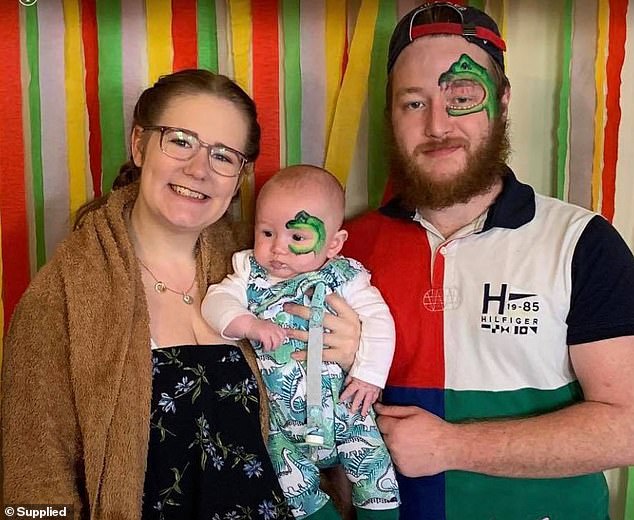 ‘Please if you’re a parent, no matter their age. Hold your child close. Give them the biggest kiss and cuddle you can. You never know when it may be your last,’ Mr Ward wrote on Facebook.

The couple’s families will take part in the K’s For Kids 34km walk from Salisbury to Glenelg, with all donations going towards the Sids Foundation and Kids South Australia foundation.

Friends of Mr and Mrs Ward have set up a Go Fund Me to help pay for the family’s bills while they take time to grieve.

The exact number of babies who have died from SIDS is unknown, but it’s estimated to claim the lives of between 130 and 150 babies each year in Australia.

Sudden Unexpected Death in Infancy (SUDI) is a term used to describe the sudden and unexpected death of a baby.

SUDI may be the result of a serious illness or a problem that baby may have been born with, but most SUDI deaths occur as a result of either SIDS or a fatal sleep accident.

When no cause for the death can be found, it is called ‘SIDS’, which is the sudden, unexpected and unexplained death of an apparently well baby.

Most deaths happen during the first 3 months of a baby’s life.

Infants born prematurely or with a low birth weight are at greater risk, and SIDS is also more common in baby boys.

Most unexpected deaths occur while the child is asleep in their cot at night.

However, SIDS can also occur when a baby is asleep during the day or, occasionally, while they are awake.

How to prevent SIDS:

– Keep baby smoke free before and after birth

– Sleep baby in a safe cot in parents’ room