Adele has revealed that she is addicted to exercise as she breaks her silence on her 100lbs weight loss as well as speaking candidly about her divorce and hot new romance with Rich Paul.

The Someone Like You singer, 33, made history on Thursday as the first celebrity to cover British and US Vogue where she addressed her break up with ex-husband Simon Konecki and her body transformation for the first time.

She looked incredible in an accompanying shoot for the publication as she posed in a black satin corset dress before changing into a yellow couture Vivienne Westwood gown.

Honest: Adele has revealed that she is addicted to exercise as she breaks her silence on her 100lbs weight loss as well as speaking candidly about her divorce and hot new romance with Rich Paul for an interview with Vogue

Speaking about her incredible weight loss over a period of two years she said: ‘It was because of my anxiety. Working out, I would just feel better.

‘It was never about losing weight, it was always about becoming strong and giving myself as much time every day without my phone. I got quite addicted to it. I work out two or three times a day.’

Adele also discussed her divorce from Simon, 47, saying that she ‘left’ him and ‘would have been miserable had she not put herself first’. 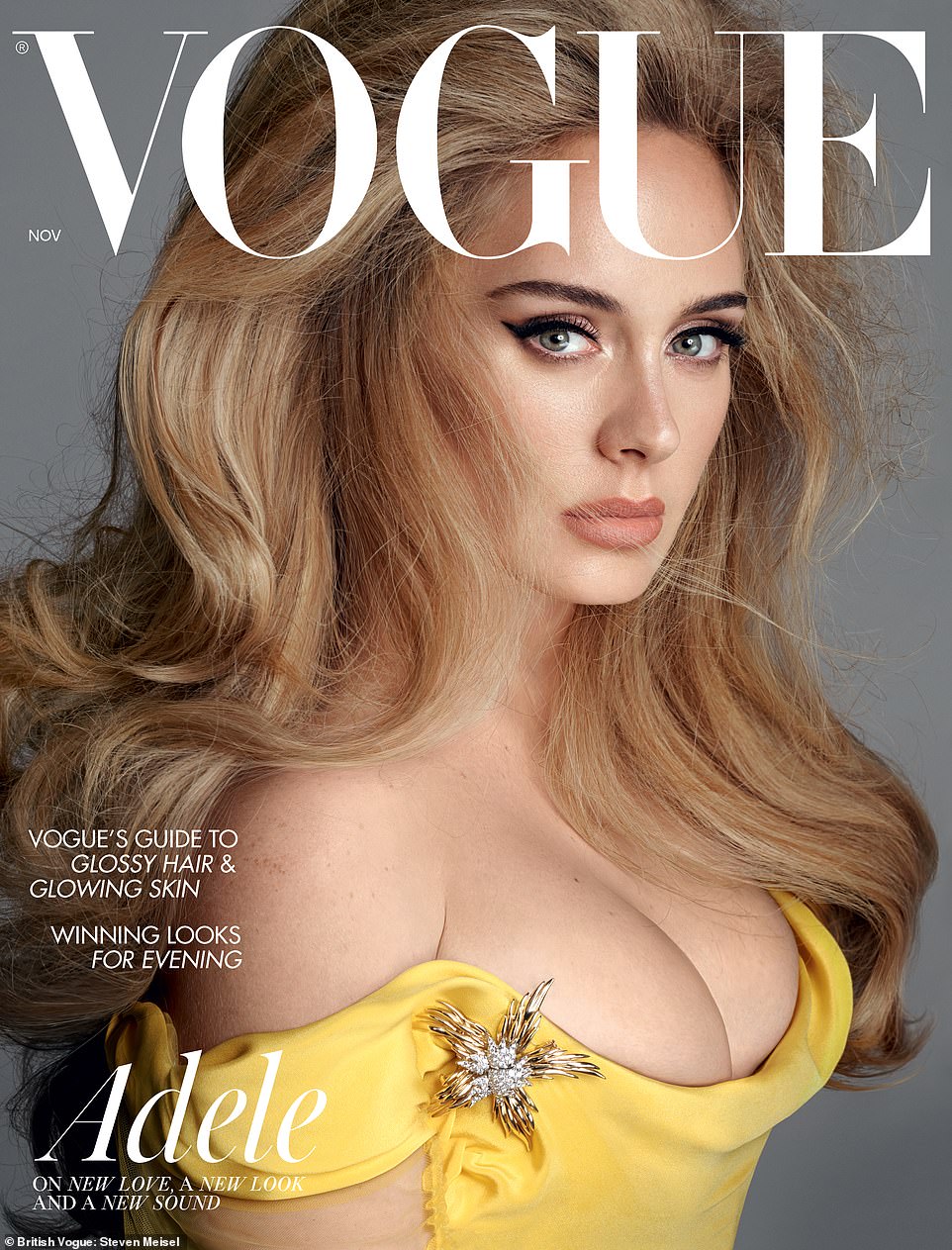 Icon: She looked incredible in an accompanying shoot for the publication as she posed in a black satin corset dress before changing into a couture Vivienne Westwood gown (pictured) 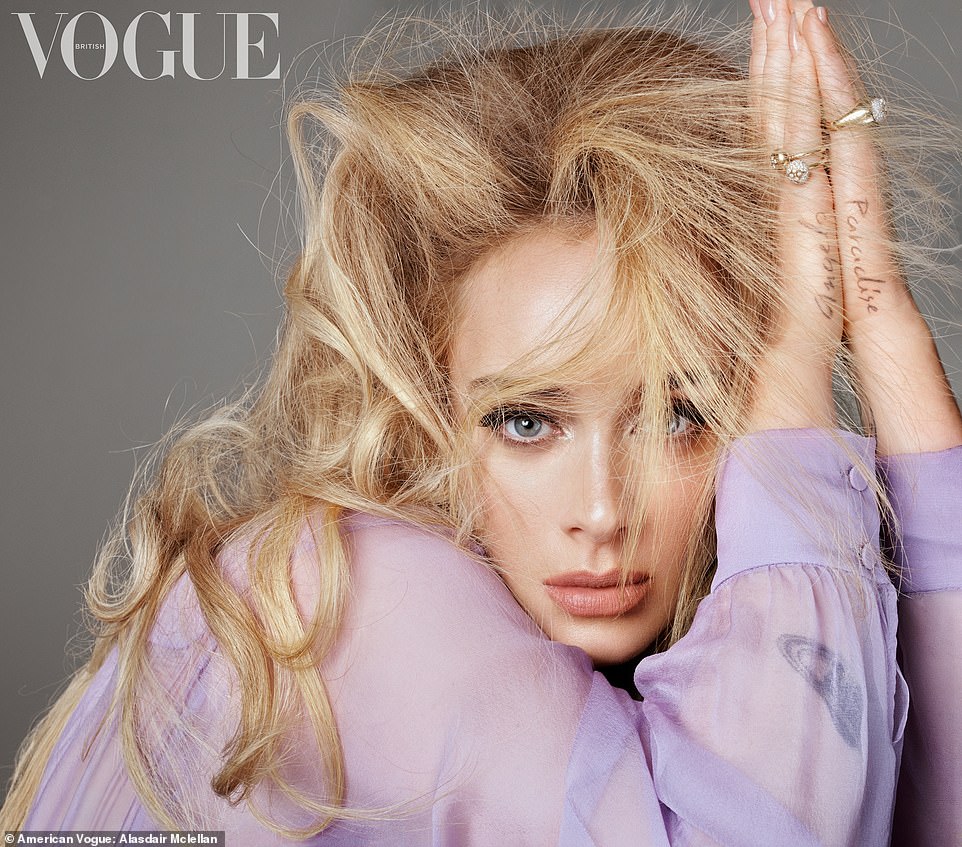 Looking good: The Someone Like You singer, 33, made history on Thursday as the first celebrity to cover British and US Vogue where she posed in a lilac top and wore her hair in tousled waves

She said of the breakdown of her relationship: ‘It just wasn’t right for me anymore. I didn’t want to end up like a lot of other people I knew.

‘It wasn’t miserable miserable, but I would have been miserable had I not put myself first. But, yeah, nothing bad happened or anything like that.’

She added of the aftermath of her divorce: ‘I was embarrassed. I was really embarrassed. That thing of not being able to make something work. We’ve been trained as women to keep trying, even by the movies we watched when we were little. At the time it broke my heart, but I actually find it so interesting now. How we’re told to suck it up.’

For the magazine’s cover shot she looked stunning as she slipped into a busty yellow couture gown.

The star wowed in the corset-style dress by designer Vivienne Westwood for the radiant shoot. 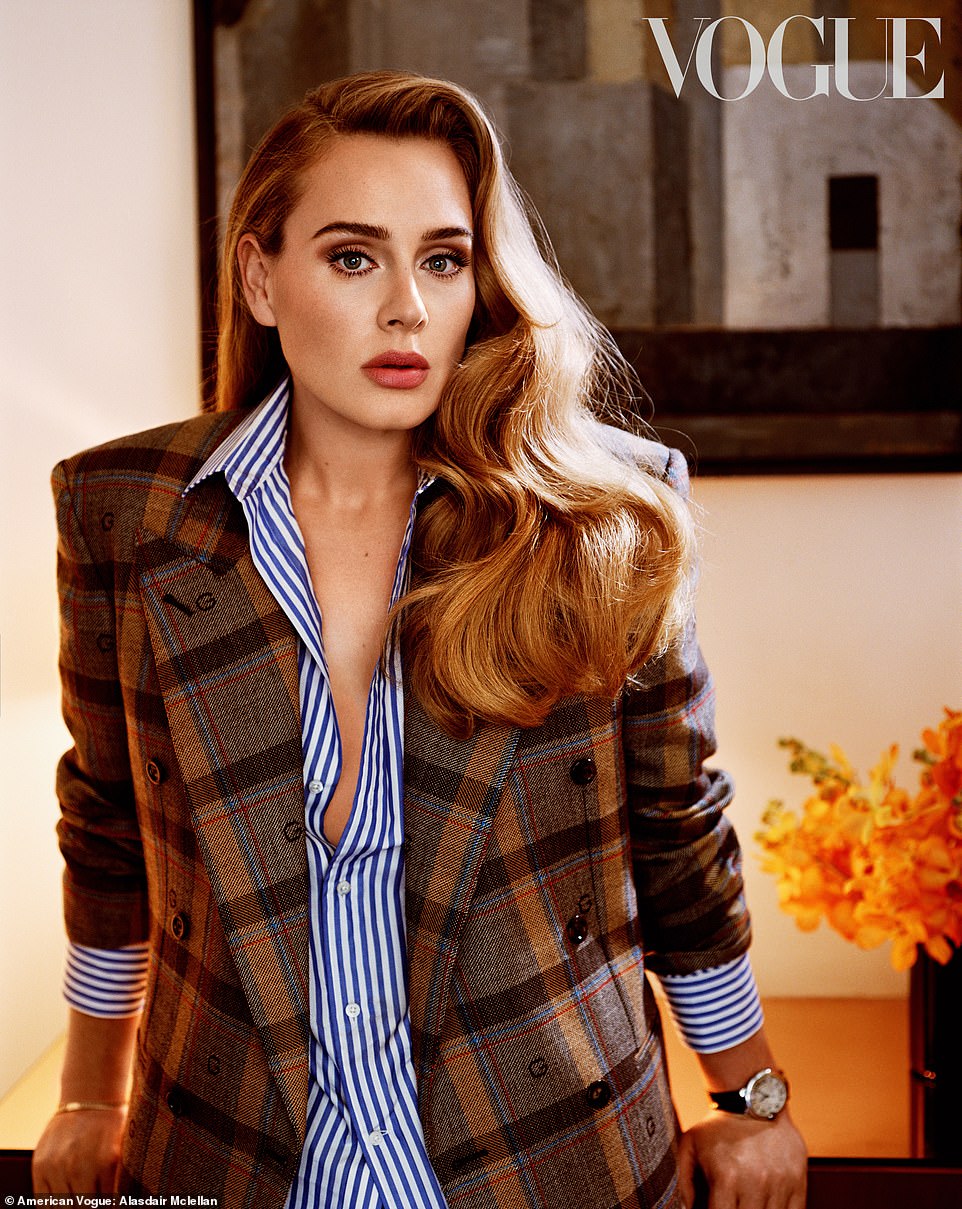 Looking good: The songstress looked chic in a tweed jacket and striped shirt for another stunning look

She wore her blonde tresses in a bouncy blow dry for the glowing image and opted for a glamorous makeup look complete with her classic winged black eyeliner.

Elsewhere in the spread she turned up the heat as she wore a busty black corset-style dress which she teamed with spotty patterned tights and white heels.

The songstress looked chic in a tweed jacket and striped shirt for another stunning look before changing into a dramatic green dress.

In the interview she also spoke for the first time about dating her new boyfriend, Rich Paul.

She said: ‘I did date before Rich, but they hated it. They’d find it stressful being out or seen with me…Whereas he’s not frazzled by it at all. It feels like it’s consistent and considerate enough that I don’t care who knows. He’s great. He’s so f**king funny. He’s so smart, you know.’ 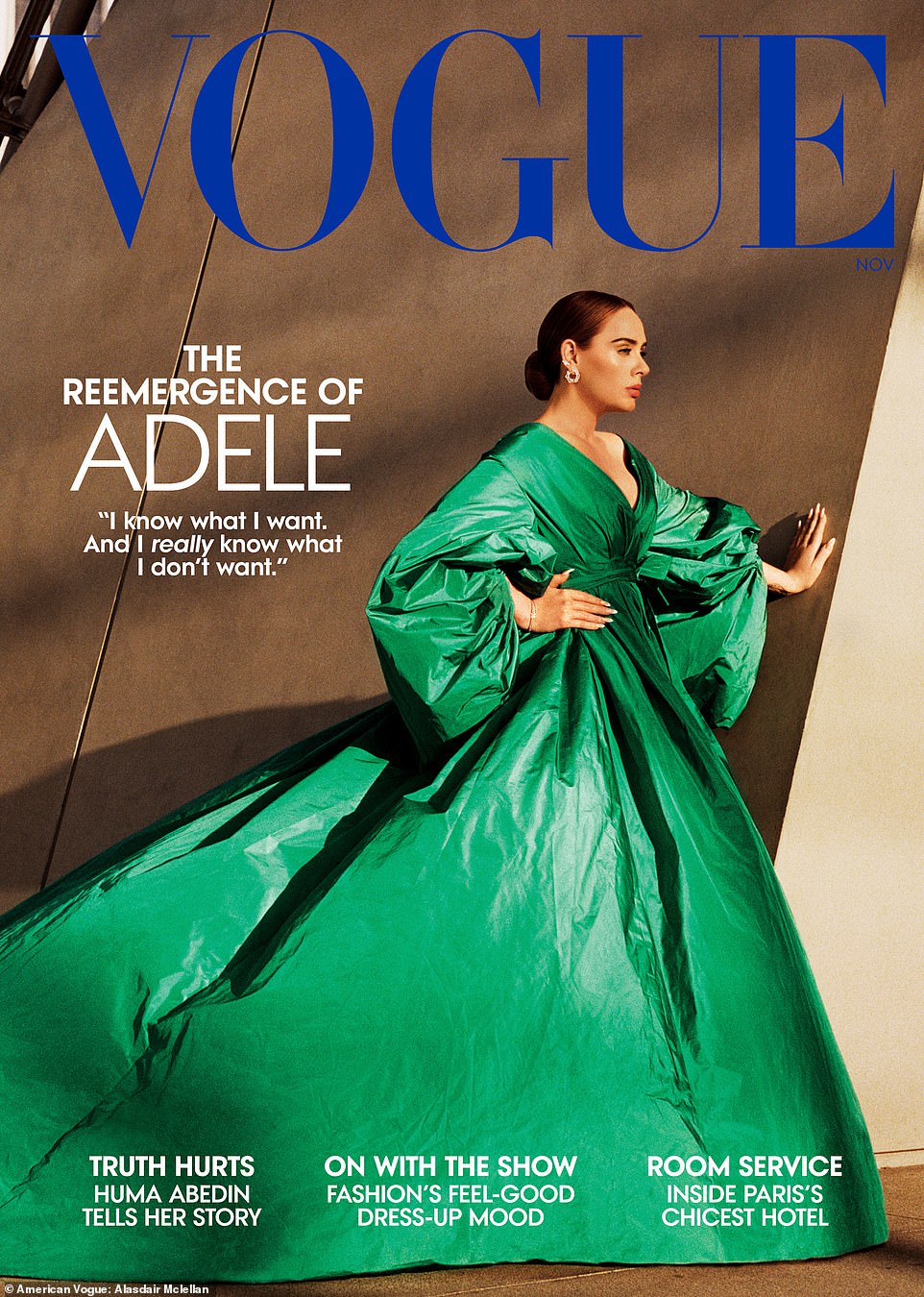 Style: She changed into a dramatic green dress for another look that was cinched in at the waist and featured statement sleeves

Rich and Adele confirmed their romance last month after being spotted on a dinner date, after going public in July when they sat court side at game five of the NBA Finals in Phoenix, Arizona.

They have since gone Instagram official and have ‘met each other’s children’ and are ‘inseparable’ according to reports.

Adele is said to have already introduced sports agent beau Rich, 39, to Angelo – her and ex Simon’s eight-year-old son – and the Skyfall hit-maker has also been spending time with Rich’s three children. 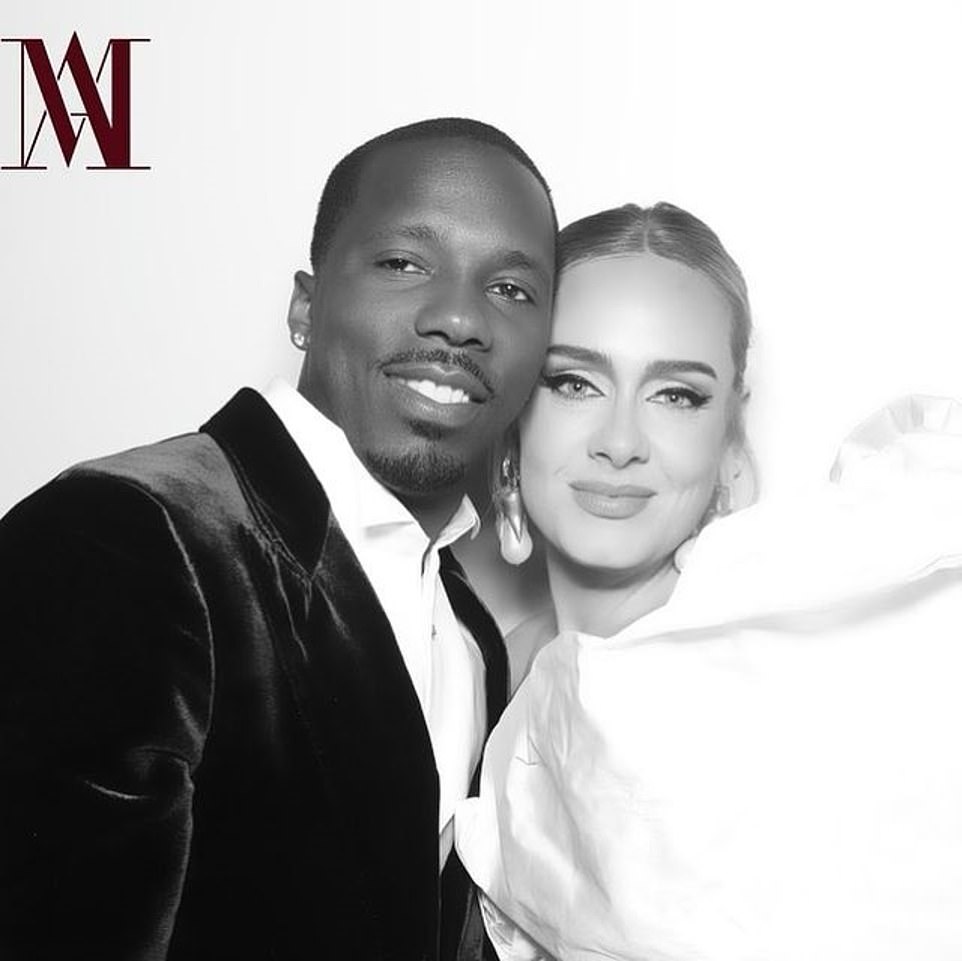 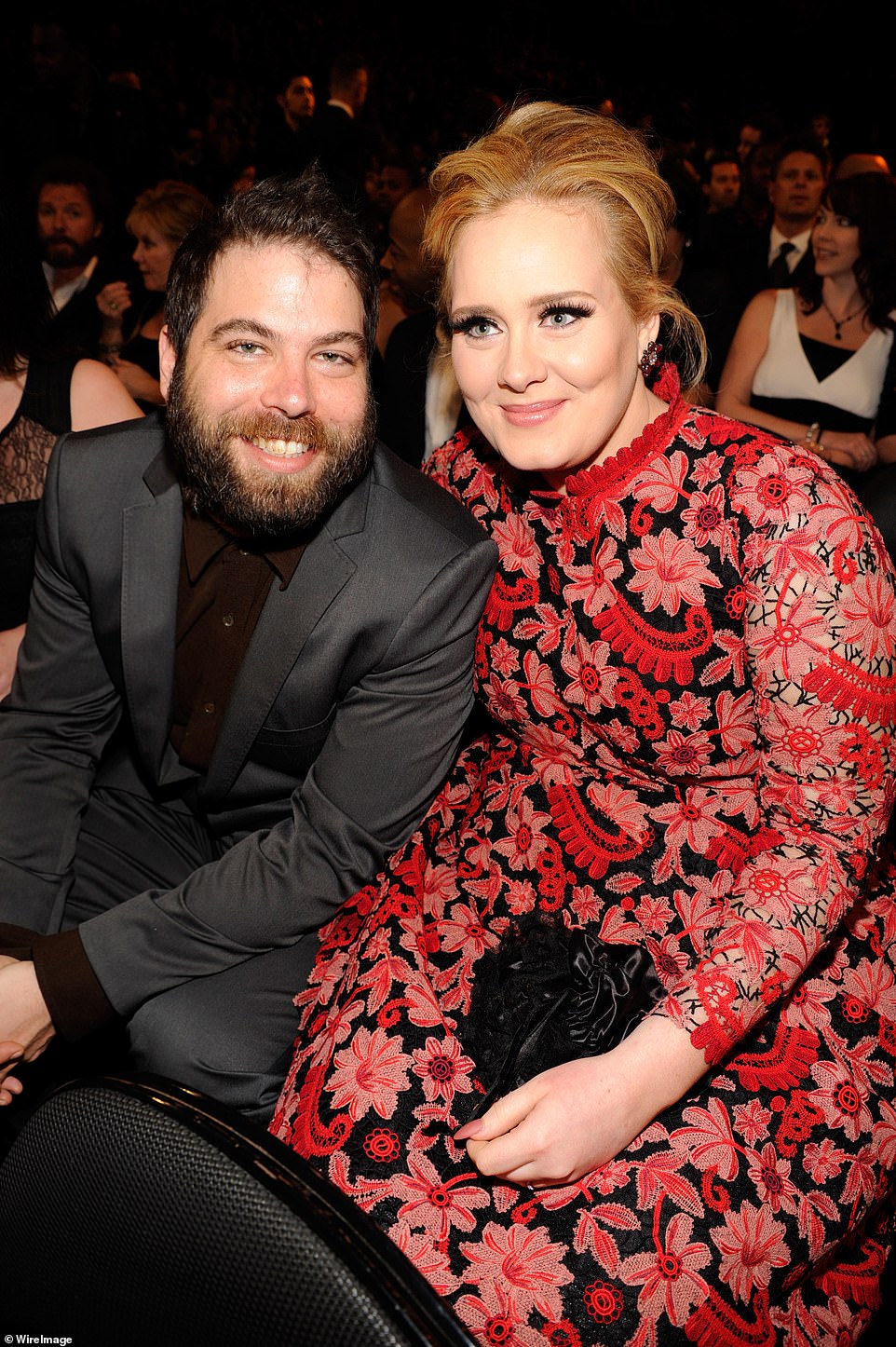 Speaking with Vogue Adele also touched on life with her son, and told how she recorded a lot of her new album for him.

She explained: ‘I just felt like I wanted to explain to him, through this record, when he’s in his twenties or thirties, who I am and why I voluntarily chose to dismantle his entire life in the pursuit of my own happiness.

‘It made him really unhappy sometimes. And that’s a real wound for me that I don’t know if I’ll ever be able to heal.’

For the first time in history British Vogue and American Vogue are sharing their cover for November to feature Adele.

Sharing the image on social media, the publication wrote: ‘In a spectacular transatlantic takeover by one of the biggest-selling female artists of the 21st century, for the first time in history #BritishVogue and American @VogueMagazine share a cover star: the inimitable Adele.’

Adele also shared the cover shot to her Instagram account and excitedly wrote in the caption: ‘Imagine four larger than life Brits tasmanian deviling around Milk Studios in Manhattan all under the watchful eagle eye of the myth, the legend, the most iconic and hilarious Steven Meisel! 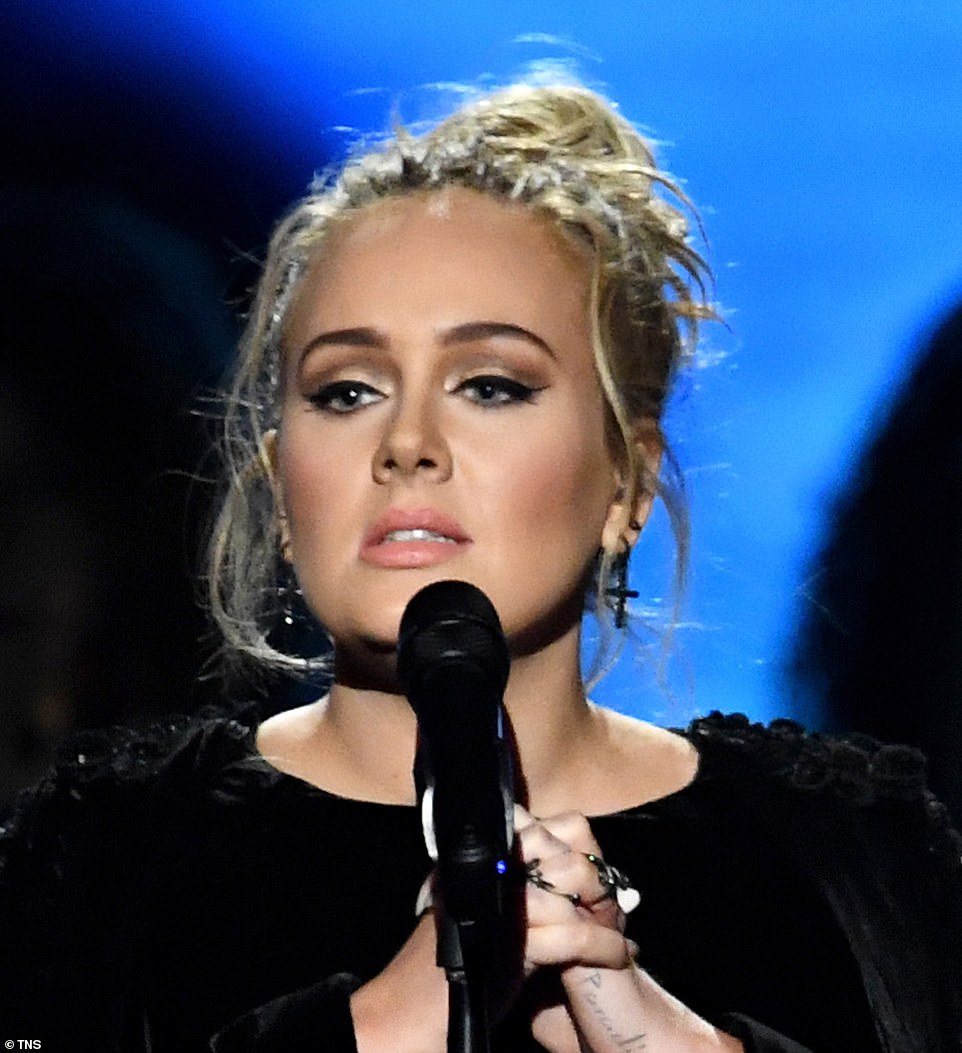 Exciting! It comes after it was reported on Wednesday night that Adele is set to make her music comeback with a special performance show for ITV (pictured performing in 2017)

‘We caused havoc! Thank you Edward, Steven, Pat, Guido, and Giles. To glam, wardrobe, the crew, and everyone at British Vogue… In the words of Pat herself – ‘MAJJJJJOOORRR BAAAAABBBEZZZZ’.’

She then shared the second shot of her in the green dress, writing: ‘The Academy Museum of Motion Pictures, which was still under construction at the time, let us use their incredible rooftop and grounds to shoot me dressed up and looking rather fancy if I do say so myself!

‘A little bit of Tottenham in Hollywood’s Museum! Oi Oi! Alisdair McLellan photographed me for this cover, who amongst so many other things also shot the 25 album cover �� Thank you to Alasdair, Tonne, Frankie, Akki, Kimmie, Sergio, and lovely Abby.

‘Anna – I remember the first time we met when I was 20 and you dressed me for my first ever Grammys with Barbara Tfank. Thank you to you and thank you to Edward for letting me be a part of this Vogue moment all these years later ♥️.’

Yay! The Someone Like You singer, 33, finally unveiled her long-awaited new music on Tuesday, taking to Twitter to reveal her new song is called Easy On Me and is set for release on 15 October (pictured is a shot from the teaser clip)

The new shoot comes after it was reported on Wednesday night that Adele is set to make her music comeback with a special performance show for ITV.

The star finally unveiled her long-awaited new music on Tuesday, taking to Twitter to reveal her new song is called Easy On Me and is set for release on 15 October.

According to The Sun, the hitmaker is in advanced talks with the broadcaster about starring in an ‘Audience With’-style programme to showcase the new songs.

It comes after the last time she released new music back in 2015 with her album 25, she featured in a one-off special singing the new hits called Adele at the BBC.

The show was hosted by talk show sensation Graham Norton and saw the Hello songstress performing her third album hits live with a band.

A source told the publication: ‘The contract is not yet signed, but ITV are really keen to make it happen.

‘Adele at the BBC was the music television event of the year, and they’re keen to get all over her comeback which is the talk of the industry.’

MailOnline has contacted representatives for Adele and ITV for a comment.

It has been reported that the show is being produced by Fulwell 73, who also created James Corden’s popular US series The Late Late Show.

Adele and Fulwell have previously worked together when she starred in James’ Carpool Karaoke skit.

She’s back! The short clip showed Adele driving down the road in a vintage car before revealing the release date

She took to Twitter to reveal her new song is called Easy On Me and is set for release on 15 October.

In a brooding black and white teaser, the star’s trademark liquid eyeliner was visible as well as her long nails as she drove a car down a country road having just slotted a cassette into a player with the name of the song scrawled across.

Adele could be seen with her hand extended out of the car window moving in time with the music. She was sporting a PVC mac and lengthy, pointed nails.

As she sped along the street, sheet music blew out of bags in her car and into the air as the piano played – yet no vocals were heard from the pop icon.

Fans swiftly flooded the post with excited replies, as users responded: ‘ADELE OMGGG… OMFG… At least now we know why the comeback took so long, the songs flew out of the car… took three years to gather them all music notes…

‘I LOVE YOU SO MUCH… SHE IS HERE TO BREAK THE INTERNET… Already did… FINALLY! YESSSS… Woww’.

The release came after fans could barely contain their excitement on Monday as they flooded Twitter with speculation of her fourth album.

She prompted the lively online conversations after updating her social media channels to encompass an intriguing dark teal hue. 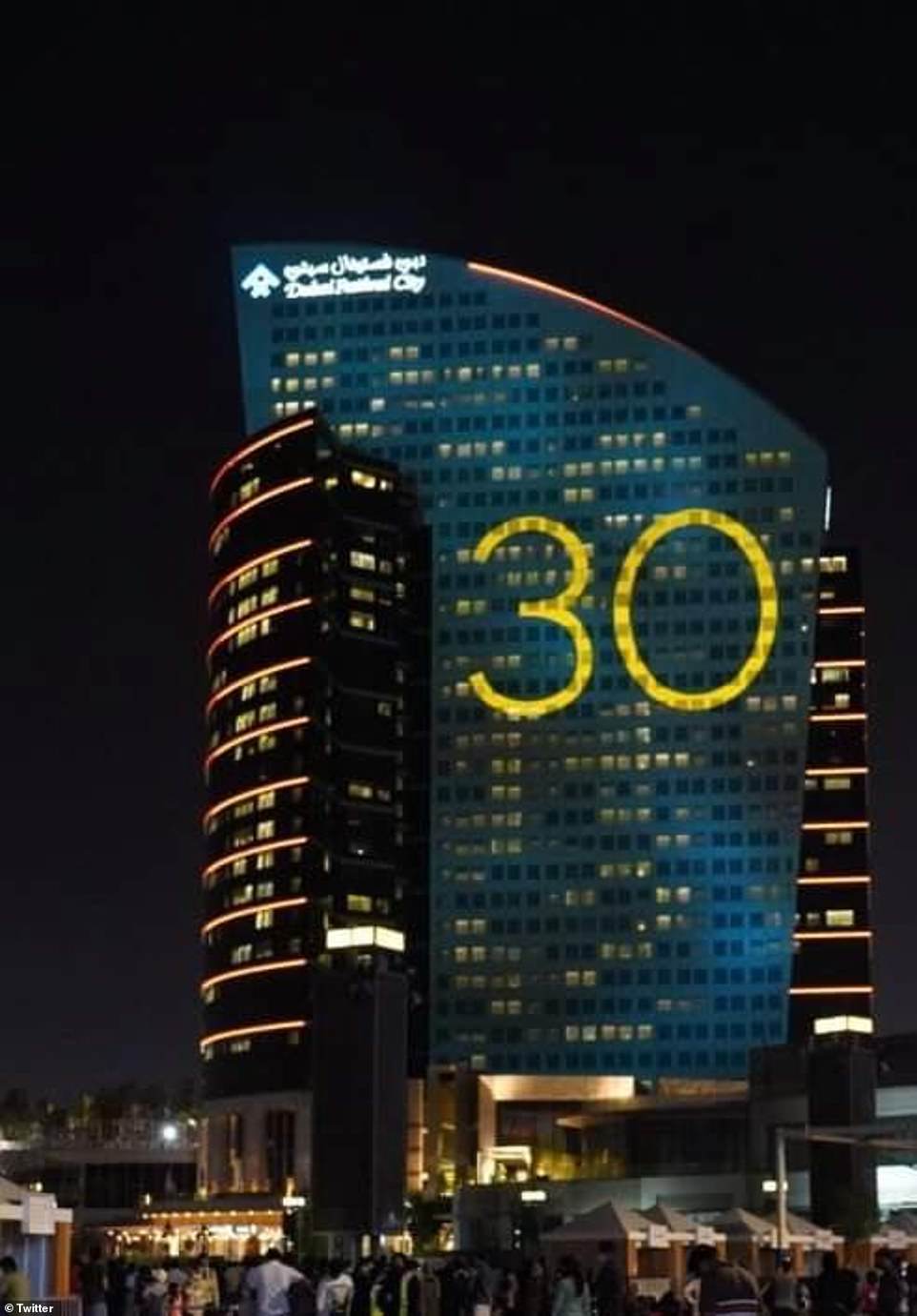 Tease: The social media update came just days after Adele fans speculated that new music was on the way after a series of ’30’ billboards popped up across the globe

Observant enthusiasts noticed the colour was synonymous with a series of ’30’ billboards that popped up across the globe last week.

The ’30’ title would certainly fall in line with Adele’s preferred way of naming her albums, with all three of her studio albums named after her age.

Should Adele follow the previous pattern, the 30 album would provide plenty of inspiration, having been the age she separated from ex-husband Simon Konecki.

Last month it had been reported that Adele was set to make a show-stopping comeback in time for Christmas with her much-anticipated fourth album and televised Las Vegas concert. 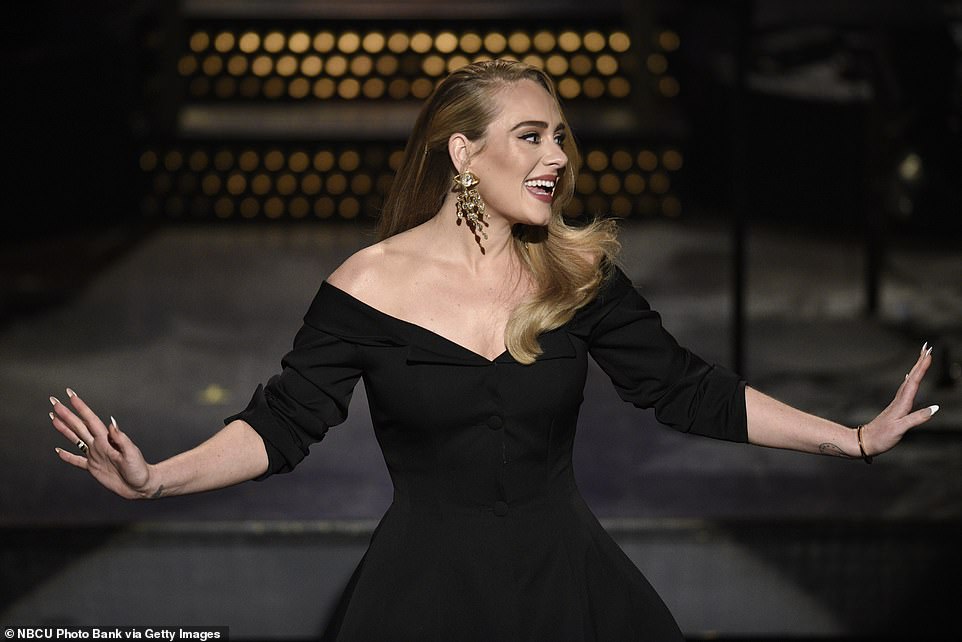 The alleged spectacular will mark the singer’s first live performance in over four years, following her record-breaking stadium tour which concluded in 2017.

A source told The Sunday Mirror: ‘It’s been a long time coming but her label wants it released before Christmas and have their sights set on a performance in Vegas.

‘Adele and her management have been in talks with BBC America about broadcasting it around the world. This will be one of few performances as part of her promotional tour,’ the source added.

‘Obviously with ongoing Covid dramas and concern for safety it could affect recording, but this is the date scheduled right now.’

In a bid to top her last LP 25, which sold a whopping 23 million copies since its 2015 release, the Grammy winner’s latest project was due to be dropped last year but was delayed by the ongoing COVID-19 pandemic.

Along with a major marketing campaign, her record label Sony is thought to be penciling in a November release for the collection of tracks which will see the icon reflect on her divorce from husband Simon.

Ed Sheeran recently revealed he believed the Hello hitmaker was aiming for a festive comeback. In a recent interview he said: ‘I think Adele’s coming back before Christmas. I’ve heard rumours.’

Adele covers the November issues of British and American Vogue. 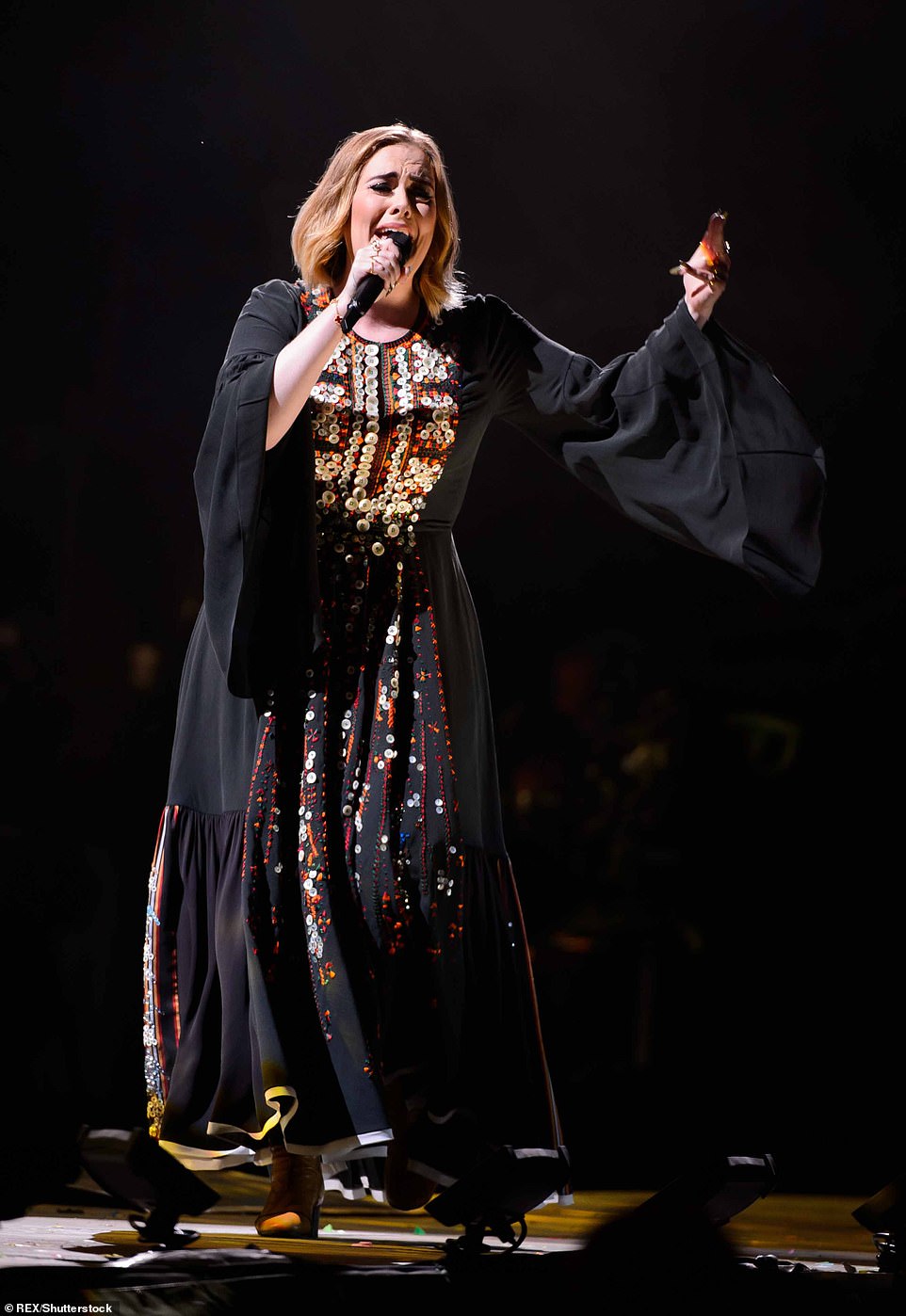 Icon: Adele is pictured performing on the Pyramid Stage at Glastonbury in 2016