The top Navy admiral now overseeing the USS Theodore Roosevelt has revealed that its sailors are ‘struggling’ after their captain was controversially sacked, as he admitted that the crew should have been told sooner about the ‘true dangers of coronavirus’.

The commander of the 7th Fleet Vice Admiral Bill Merz visited the Navy ship on Tuesday, following the saga of the last week which saw Captain Brett Crozier fired after his memo urging the Navy to respond more quickly to a coronavirus outbreak onboard was leaked and acting Navy Secretary Thomas Modly was then forced to resign amid a backlash over Crozier’s ousting.

Merz said that morale onboard the Navy ship had plummeted, as 447 of the 4,000 crew members are now infected with coronavirus.

‘There was lots of anxiety about the virus,’ Merz told CNN.

‘As you can imagine the morale covers the spectrum, considering what they have been through.’

Merz said many sailors have been left ‘upset’ and ‘struggling’.

The crew is ‘struggling in the wake of losing their CO and their perception of the lack of activity regarding fighting the virus,’ Merz said.

Many were still reeling after Modly’s visit, in which he slammed the crew’s beloved captain as either ‘naïve’ or ‘stupid’ because his plea to Navy bosses went public.

‘They were visibly still upset about the secretary’s visit so I walked them through what I knew, which really was not much more than what everybody else knew,’ Merz said.

‘I think they just needed to tell somebody about how much that hurt them and disappointed them.’ 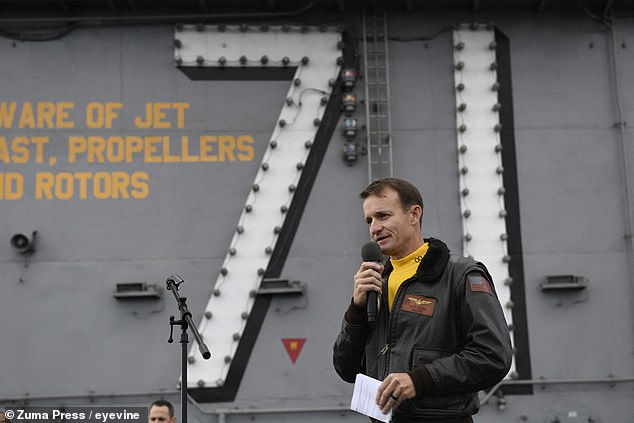 Captain Crozier (pictured) was controversially sacked last week, after his memo urging the Navy to respond more quickly to a coronavirus outbreak onboard was leaked

The commander admitted that the Navy should have warned the crew sooner about the dangers of coronavirus, which has now killed more than 18,000 Americans and infected half a million.

‘I think we could have told them earlier what we knew’ Merz said.

‘The degree of accuracy against the virus at any level is a little sketchy, but I think we could have at least bought them in earlier and started having this dialog up front.

‘The specific questions clearly indicated we needed to give them more information about the true dangers of the virus.’

‘I certainly don’t think it was malice by the ship or the leadership’ he said. ‘I think it was just a matter of getting their arm around what they could and could not tell them.’ 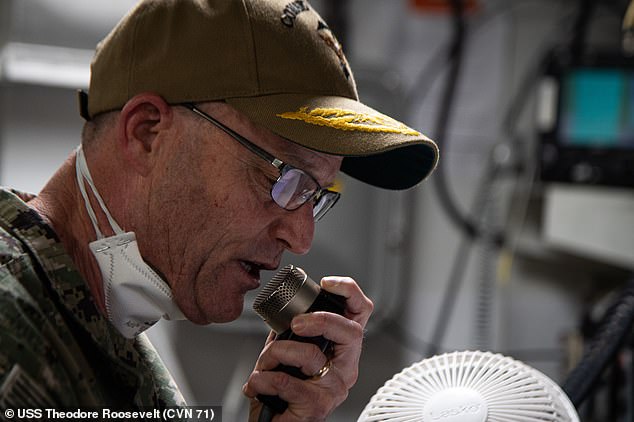 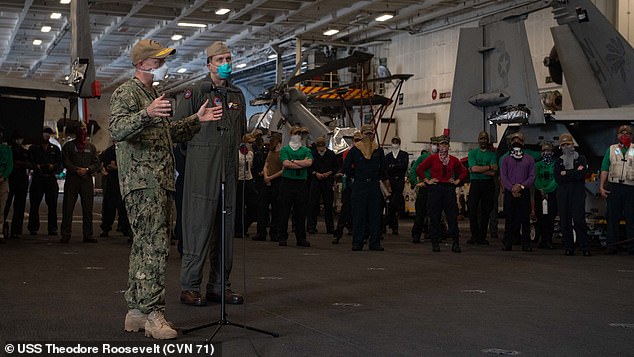 Merz (left) answered questions from the crew. He has now told CNN that the crew were ‘upset after Crozier’s firing and that ‘there was lots of anxiety about the virus’

Merz said sailors had many questions about the Navy’s response to the pandemic, showing that senior figures could have done a better job in relaying information to crew about the virus.

‘I got very specific questions about whether there would be UCMJ against their captain,’ he said.

The crew continued to show loyalty to their ousted captain, with Merz telling CNN that many sailors voiced concerns that Crozier would be punished under the Uniform Code of Military Justice over the leaked email.

Modly threatened such action against Crozier before his own resignation, but Merz said he does not think it will materialize because Crozier was not fired for a potential crime.

Crozier was given a raucous sendoff as he was forced to leave the carrier, with videos showing the crew coming out in support and cheering him. 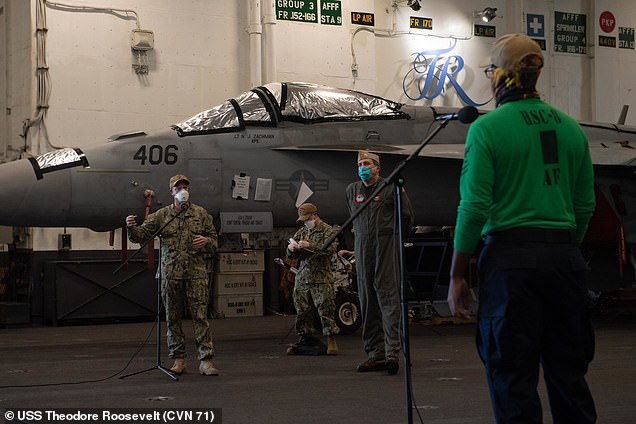 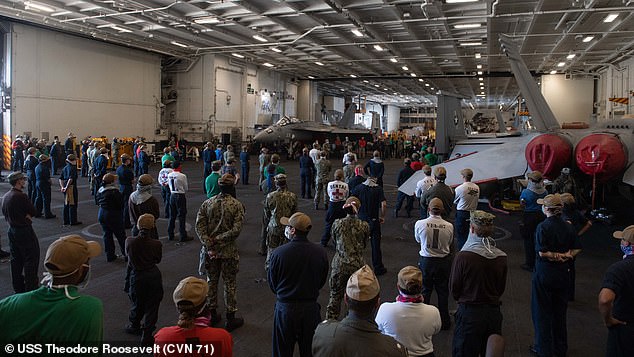 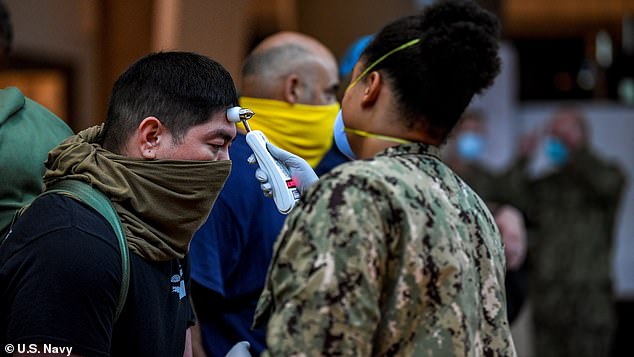 A crew member gets their temperature checked. Merz said that morale onboard the Navy ship had plummeted, as 447 of the 4,000 crew members are now infected with coronavirus

While Merz said the ‘heartfelt’ sendoff showed the crew wanted to pay their respects to Crozier he was concerned to see the sailors packed together in the video and not following social distancing practices.

‘My immediate reaction was our job just got harder for us,’ he said.

Merz said he did believe Crozier, who is now under investigation, acted under ‘pure’ motives.

‘I certainly don’t question his motives. I think his motives were pure. He was looking out for his crew,’ Merz said.

But he said commanders have ‘a lot of tools available to be heard.’

Currently, 447 of the Roosevelt’s 4,000 crew members have tested positive for coronavirus, while 800 are still awaiting results.

On Thursday, a sailor from the Roosevelt was found unresponsive in isolation on a Guam military base after testing positive for the virus and was rushed to intensive care at the Naval Hospital on Guam. 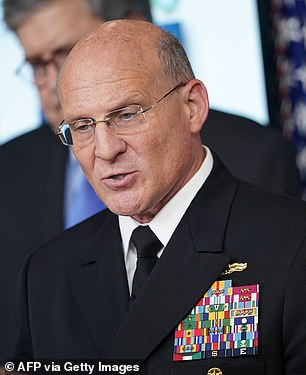 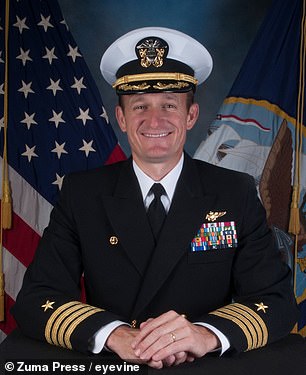 Admiral Mike Gilday (left) said on Thursday he has not ruled out reinstating USS Theodore Roosevelt captain Brett Crozier (right), who was fired after his memo leaked 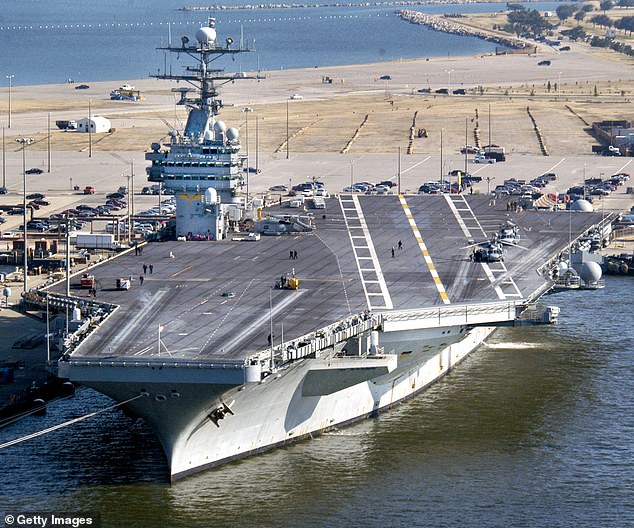 The USS Theodore Roosevelt, seen in a file photo, is currently docked in Guam

Crozier, who has also tested positive for the deadly virus, could be reinstated to his post, the Navy’s chief of operations Admiral Mike Gilday said on Thursday.

Gilday said he has not ruled out any options, including possibly reinstating Crozier, if that’s where the investigation into the leak leads.

‘I am taking no options off the table,’ he said when asked about Crozier’s fate.

The key question, Gilday said, is why Crozier felt compelled to send the memo, and whether it signaled a breakdown in communications with leadership.

The outbreak aboard the Roosevelt began in late March and has thrust the Navy into a leadership crisis.

Crozier penned a scathing letter to Navy leaders calling for stronger action to address the COVID-19 outbreak he said was unnecessarily threatening his sailors lives.

The email was leaked and hit headlines, leading Modly to fire Crozier from his command of the nuclear aircraft carrier four days later. 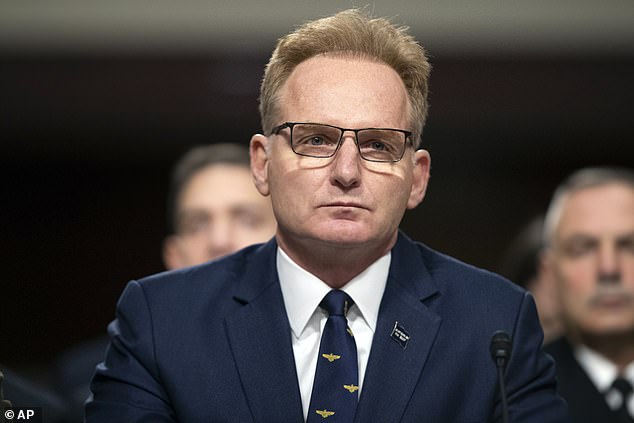 Modly said that the decision was driven by the fact that Crozier shared his letter with at least 20 people before it was leaked in the media.

Modly faced a backlash over his decision to oust the commander, with the move dividing the public, the military and politicians – with President Trump and Democratic rival Joe Biden both wading into the drama.

Modly then came under fire for flying out to the Roosevelt last weekend and making remarks to the crew during which he branded Crozier ‘naive’ and ‘stupid’ for allegedly sharing his letter outside the chain of command.

The secretary stepped down hours after he returned to Washington DC on Tuesday.

On Friday, photos were released showing the Roosevelt’s crew members being taken into quarantine, with some being quartered in a hotel and others moving into a high school gymnasium equipped with cots.

A skeleton crew remains aboard the ship to maintain its nuclear reactor and fire suppression system. 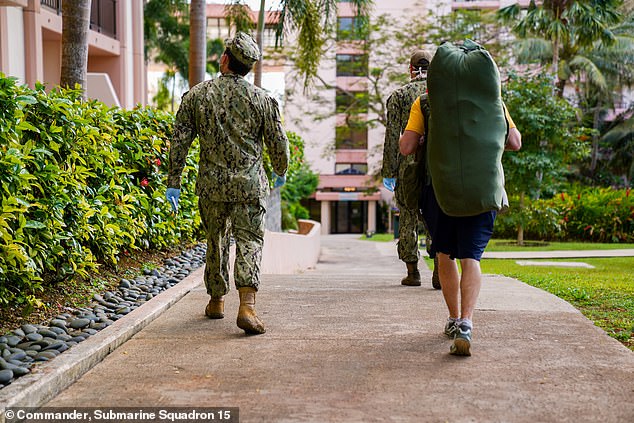 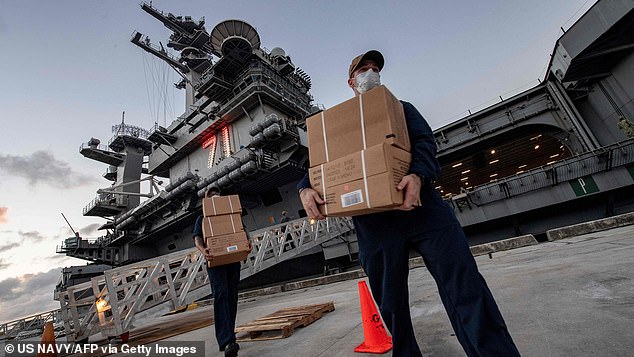 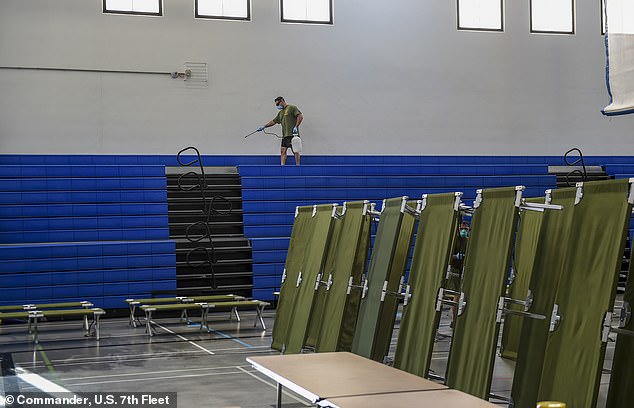 Some of the sailors from the Roosevelt will be quarantined in the gymnasium at CommanderWilliam C. McCool high school 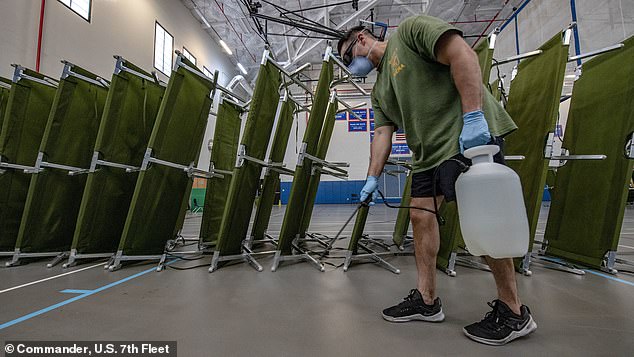 ‘It´s not a good idea to think that the Teddy Roosevelt is a one-of-a-kind issue,’ Hyten told a Pentagon news conference. ‘We have too many ships at sea. … To think that it will never happen again is not a good way to plan.’

TIMELINE OF CORONAVIRUS ON USS ROOSEVELT

MARCH 26: Navy announces the Roosevelt will dock in Guam due to health concerns for those on board

MARCH 30: Crozier writes a letter asking to evacuate some of the 4,000 crew due to COVID-19 risk. He said: ‘We are not at war, sailors do not need to die’

APRIL 2: Crozier is fired by Thomas B. Modly and is forced to leave the ship to cheers from the crew

APRIL 6:  Modly flies to Guam and gives speech on board Roosevelt calling Crozier ‘naive and stupid’

Trump distances himself from him following military backlash.

The Navy’s top officer, meanwhile, said the biggest problem is the inability to test enough people quickly, including those aboard the USS Nimitz, the next US-based aircraft carrier due to deploy out to sea.

‘The challenge that we have now, is having that type of capability where we can test in volume and at speed,’ Gilday told a small number of reporters Thursday. ‘I really don´t have a good estimate right now on when that testing capability might be available in the kinds of quantities we would like to see.’

He said sailors on the USS Nimitz, which is in port preparing for a deployment, will have all movement restricted for two weeks before the ship leaves.

One sailor was taken off the Nimitz more than a week ago after showing symptoms, but the test was not conclusive, the Navy said. Hyten suggested a small number of sailors were ill, but the Navy said Thursday that no sailors currently on the carrier have tested positive for COVID-19 or are showing symptoms.

A retired Navy admiral and former top NATO commander in Europe, James Stavridis, said he sees more trouble ahead, and not just for the Navy.

‘Clearly there are more cases to come. The most recent tally on Roosevelt alone is well over 400,’ Stavridis said via email. ‘The Navy and all the services have some hard choices ahead in terms of whether to pull units off the line to get them well or accept some level of casualties due to the coronavirus. I think it will be a case-by-case approach depending on the mission of the unit.’ 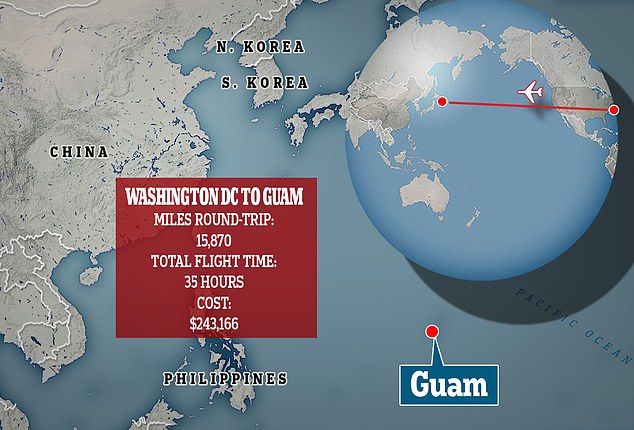 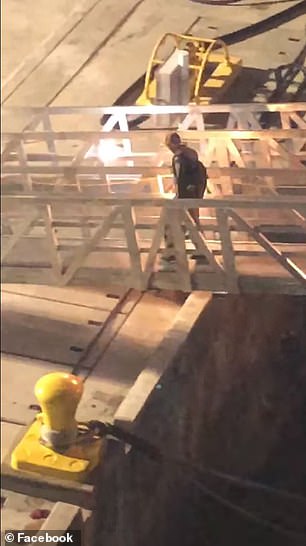 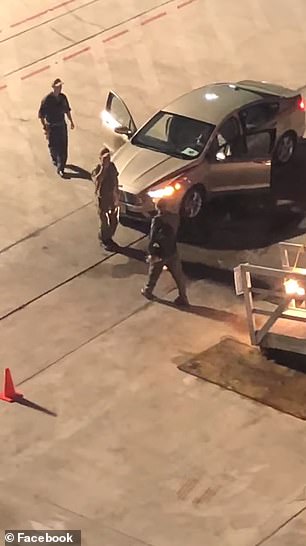