adonna, 63, hints Julia Fox, 31, is set to star in her much-delayed biopic

Madonna has hinted that Julia Fox is in the running to star in her much-delayed biopic documenting her rise to stardom, after the pair enjoyed dinner at the swanky LA eatery Delilah on Wednesday.

The 63-year-old music icon shared a set of playful images of herself at the 31-year-old Uncut Gems star from their night out, after Julia was seen packing on the PDA outside the eatery with her new beau Kanye West.

While Madonna did not confirm that Julia was starring in her film, she did write on her Instagram post that they ‘talked about the movie,’ joking some ‘other folks showed up’ after footage from the evening showed them mingling with Floyd Mayweather and Kanye’s new pal Antonio Brown.

Rising star: Madonna, 63, has hinted that Julia Fox, 31, is in the running to star in her much-delayed biopic documenting her rise to stardom, after the pair enjoyed dinner at the swanky LA eatery Delilah on Wednesday

Casting? The music icon shared a set of playful images of herself at the 31-year-old Uncut Gems star from their night out, after Julia was seen packing on the PDA outside the eatery with her new beau Kanye West

Madonna and Julia had their hands all over each other in a photo of the two spread out on a beige sofa in the 1920s-themed eatery.

The Material Girl star wore a long-sleeve white prairie-style dress, which rode up to show off her black fishnet stockings, adding an unusual red harness and edgy black combat boots. 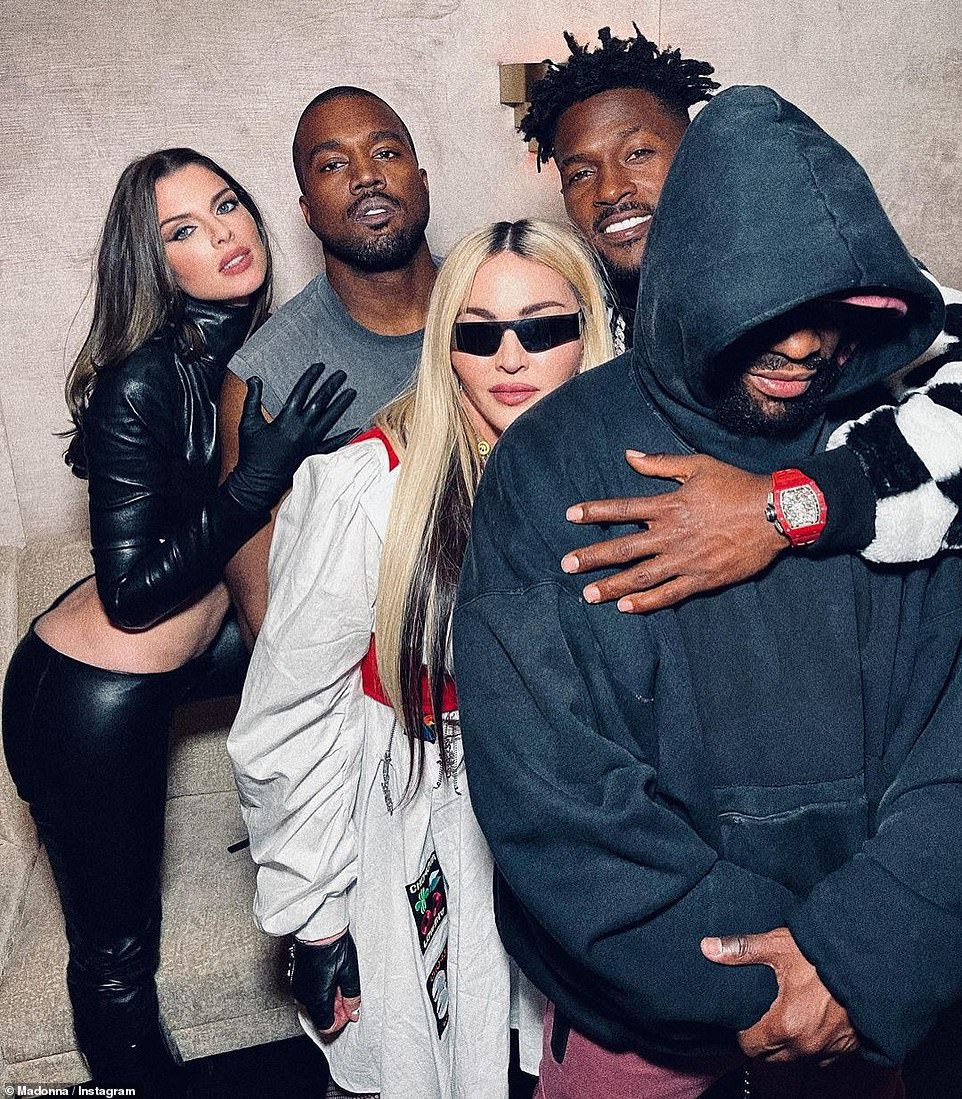 Mix and match: Madonna’s unexpected meeting with Julia came during the actress’ PDA-filled night out with beau Kanye West (second left), and the stars were also joined by boxing superstar Floyd Mayweather and Antonio Brown 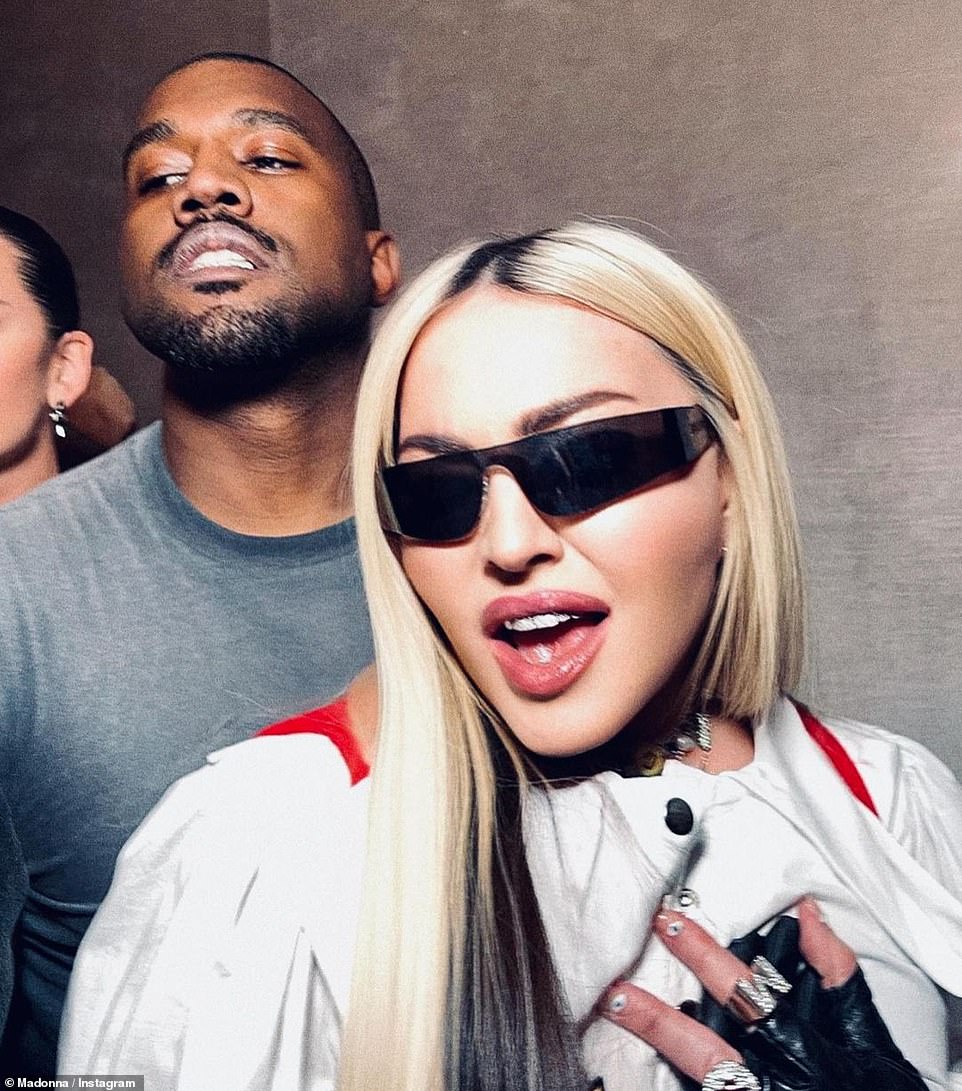 Taking it easy: Sharing a slew of selfies from the evening, Madonna was clearly in high spirits as she reunited with Kanye, after they collaborated on her song Beat Goes On in 2008 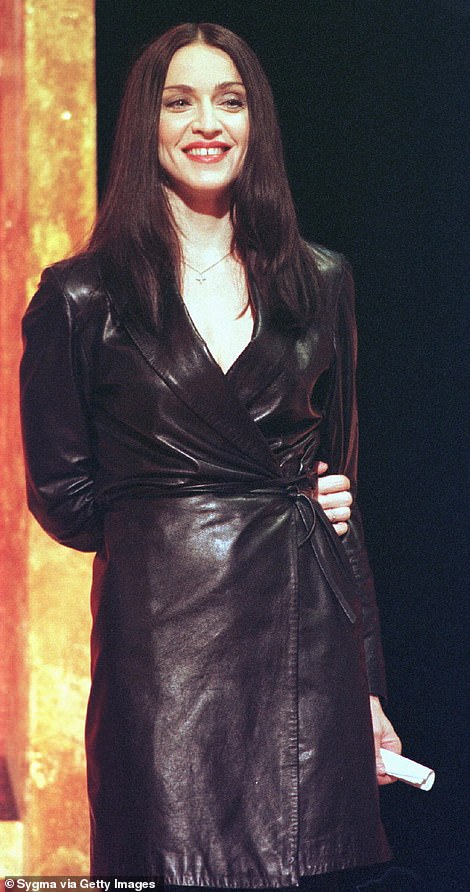 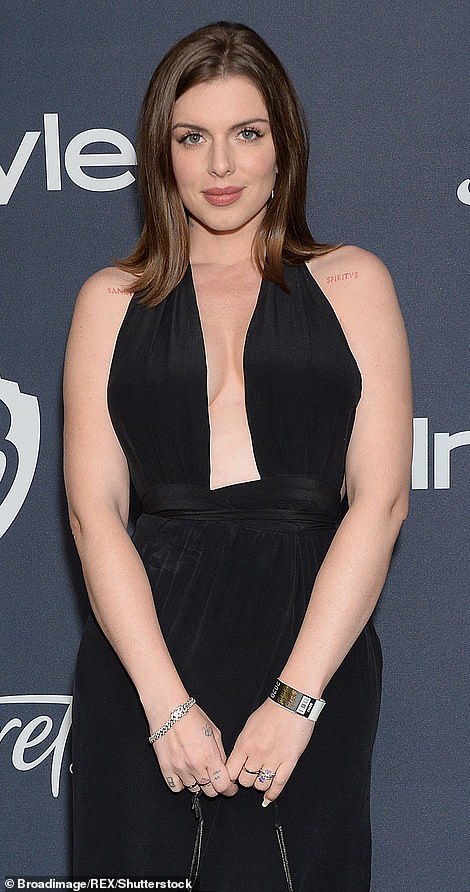 Like twins: It’s clear that Julia (right in January 2020) has a strong resemblance to Madonna (left), and the star was a natural brunette before adopting the blonde hair that she has sported through most of her career

‘Went to dinner with Julia to talk about my movie and some other folks showed up………………’ Madonna captioned her post.

It’s clear that both Julia bears a strong resemblance to Madonna during her younger years, and the star was a natural brunette before adopting the blonde hair that she has sported through most of her career.

The hitmaker is expected to direct her planned biopic and co-write it with Juno screenwriter Diablo Cody. 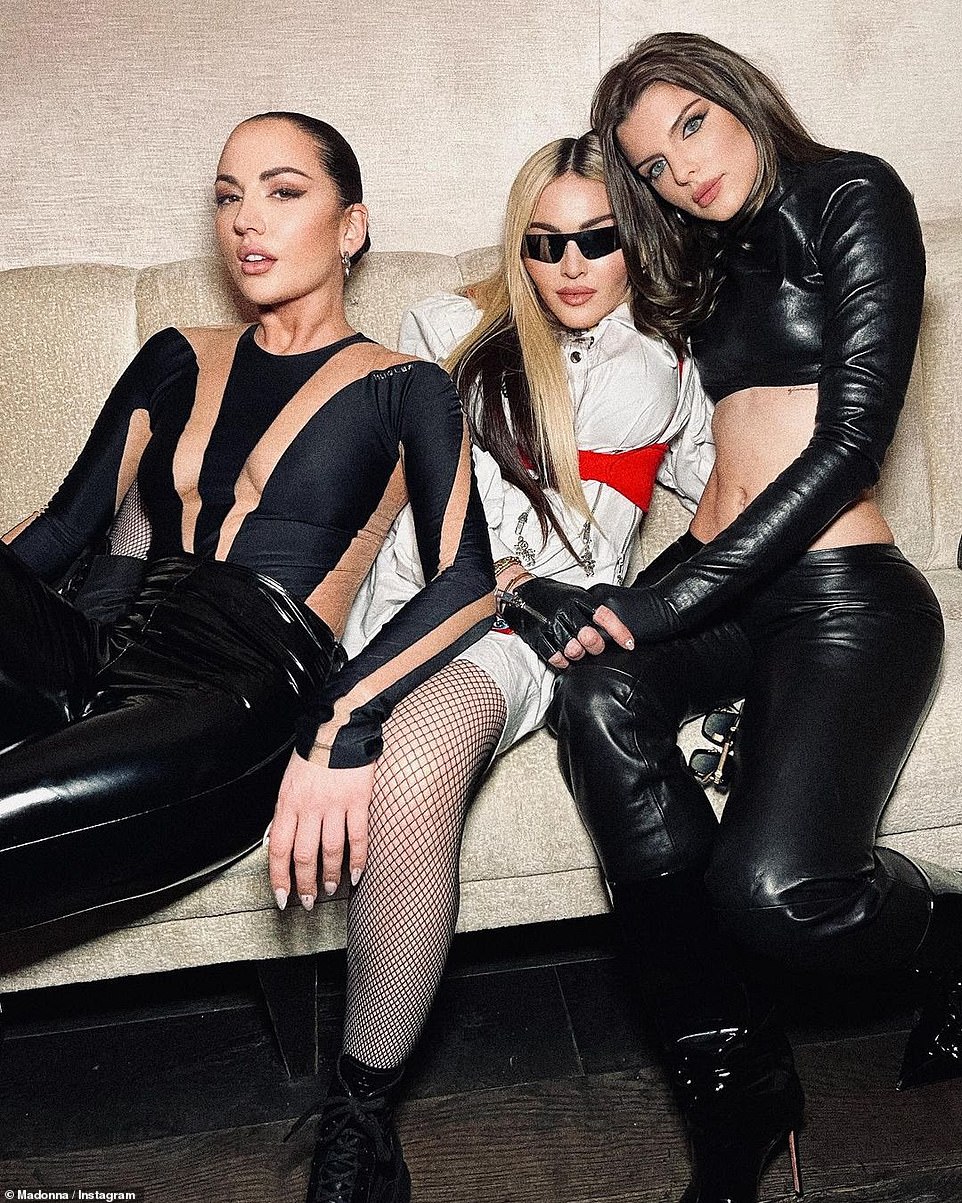 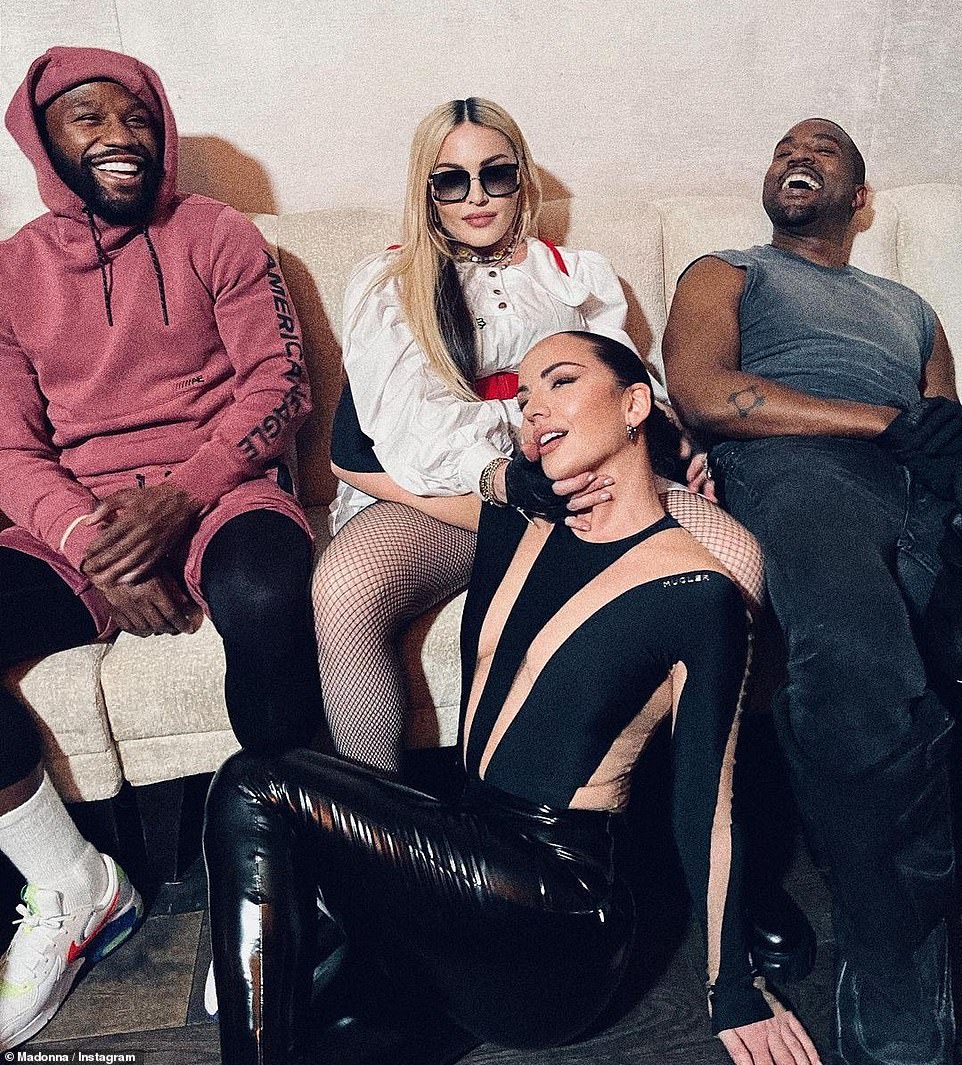 Star-studded: The trio were joined by a bevy of famous faces, including former Tampa Bay Buccaneers player Antonio Brown, Floyd Mayweather and the rapper The Game 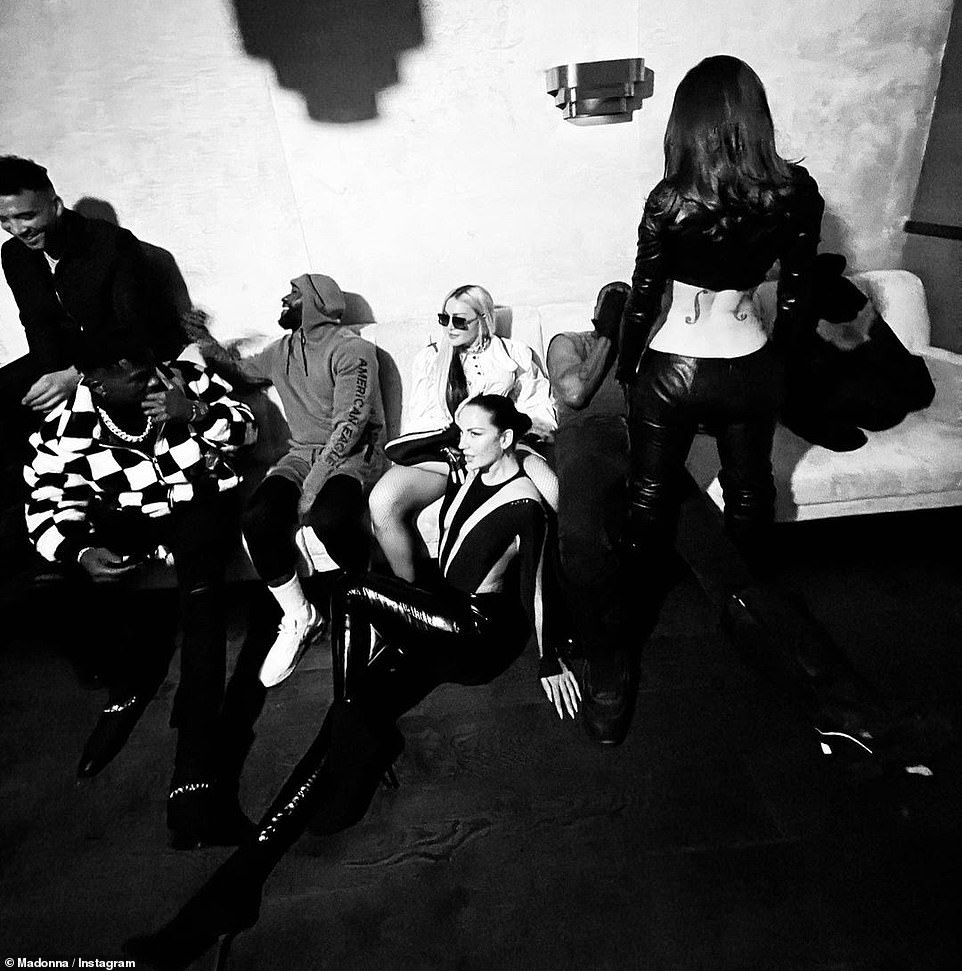 Details: It’s unclear if the Like A Virgin singer was considering Julia for the lead role in the biopic, or if she might be in contention for another part

Videos and snaps shared from the evening at the 1920s-inspired eatery showed Kanye and Julie cosying up together on a sofa inside the restaurant, with Madonna seated alongside them.

Known for her outlandish ensembles, the music legend sported a frilled white prairie-inspired mini dress with fishned tights and patent boots, along with narrow-framed black sunglasses.

A video from the night shows Madonna dancing along to the music while embracing her pal seated in front of her, while Kanye and Julia seemed more focused on each other than the superstars joining them. 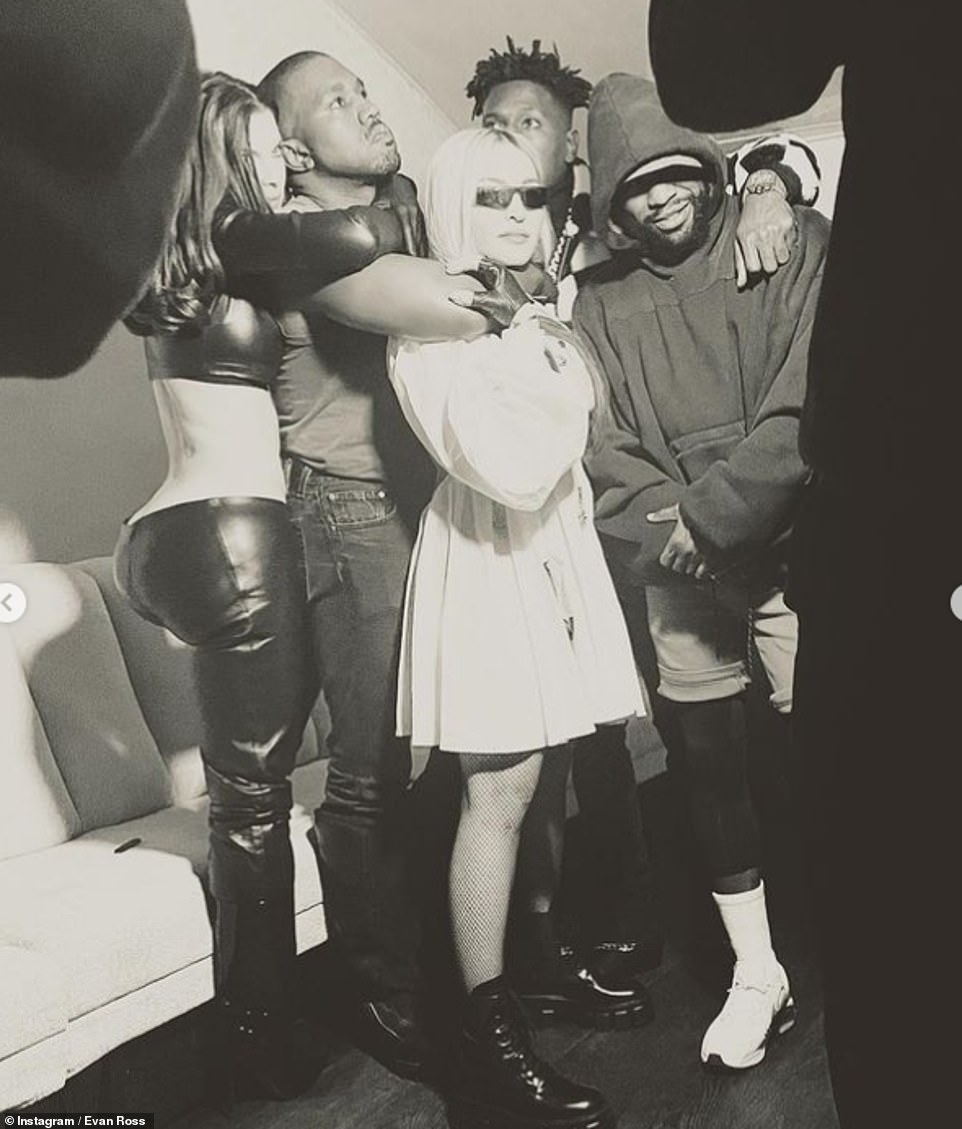 Fun night! IAfter being spotted leaving the eatery after what was supposedly a romantic date night night, social media snaps revealed the couple were joined inside Delilah by Madonna, as they all posed with boxing superstar Floyd 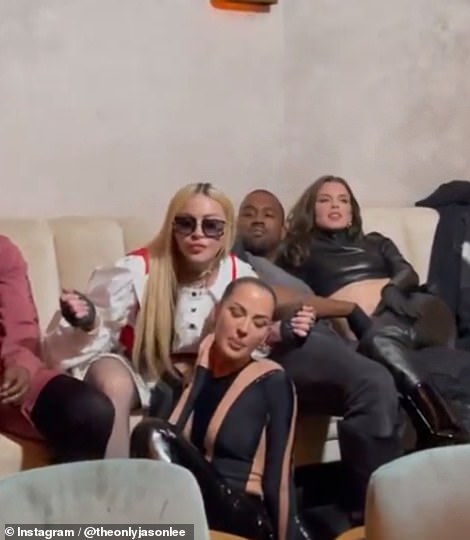 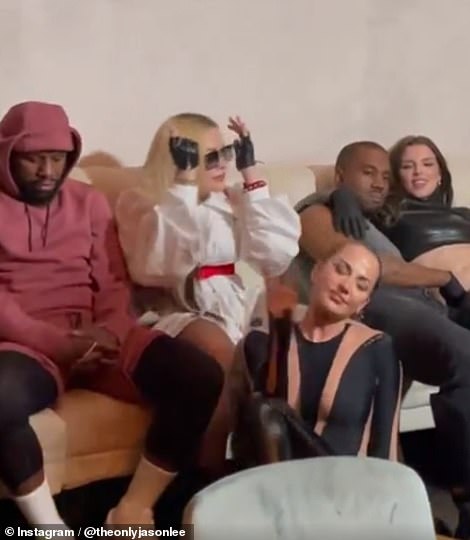 Wow: Madonna (centre in both) continued her trend for outlandish ensembles by sporting a frilled white prairie-style dress as she sat alongside Floyd Mayweather (picture right, far left) while dancing along to the heavy rap music at the event

Kanye and Madonna previously collaborated on her song Beat Goes On, which appeared on her album Hard Candy in 2008.

Boxing superstar Floyd sported a casual salmon hoodie and matching shorts as he chatted to fellow guests Antonio Brown and The Game, before appearing next to Madonna for a group image from the night. 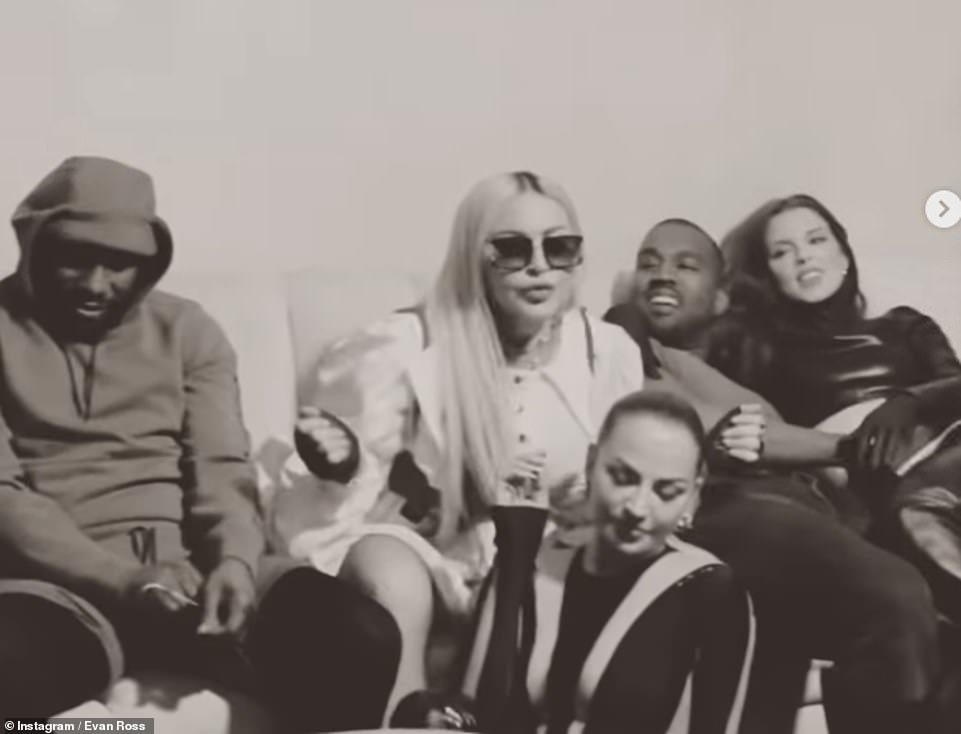 Jovial: A video from the night shows Madonna dancing along to the music while embracing her pal seated in front of her, while Kanye and Julia seemed more focused on each other than the superstars joining them 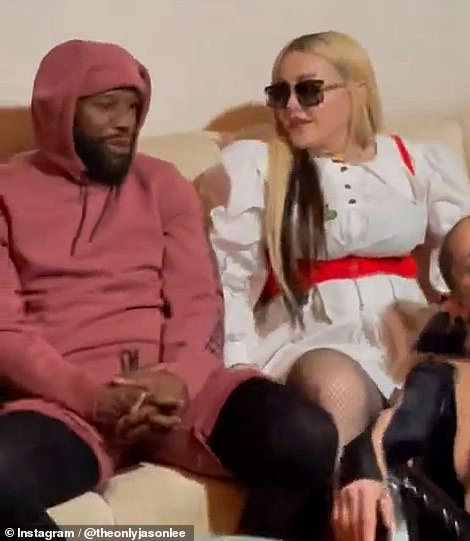 Who knew they were friends? Madonna was seen chatting to sportsman Floyd inside the star-studded evening, while the boxing icon also enjoyed the company of Antonio Brown

Delilah, known for its 1920s-inspired decor and All-American cuisine, has long been a celebrity favourite, with stars including Chantel Jeffries and Rita Ora previously spotted leaving the hotspot.

Given its high-end clientele, the restaurant boasts a high-end price list, with appetisers ranging from $18 to $25, including dishes such as Shrimp Cocktail, Chicken Tenders and Lamb Meatballs.

Entrees include a range of classic choices, such as a burger, beef stroganoff, meatloaf and shrimp linguine, with most prices ranging from $22 to $48, though a filet mignon steak will set stars back by $52., and salads costing between $18 and $28. 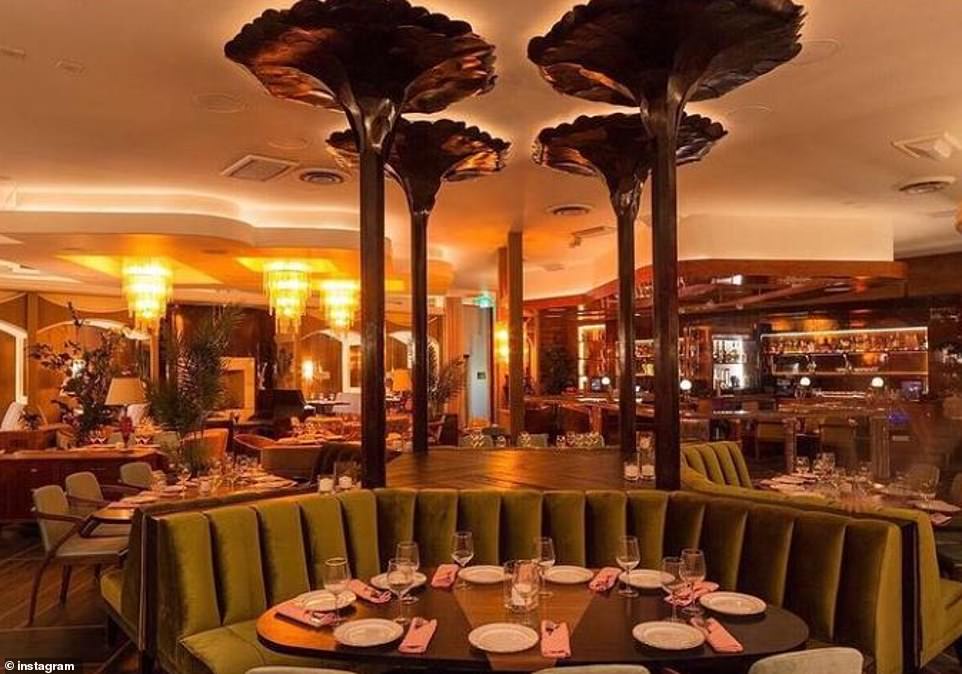 Popular: Delilah, known for its 1920s-inspired decor and All-American cuisine, has long been a celebrity favourite, with stars including Chantel Jeffries and Rita Ora previously spotted leaving the hotspot

A majority of cocktails cost around $20 each, with options including a signature Delilah Mule, Drake’s Spritzer, Coco Cabana Mojito and the $40 Champagne Papi.

But if stars want to flaunt their wealth and order a bottle of Perrier-Jouët Belle Epoque Champagne, it’ll cost a jaw-dropping $1,100.

Following their night out, Kanye made it clear he was still determined to flaunt his new romance with his girlfriend, as they exited the restaurant together.

Putting on a show for waiting fans, the rapper was seen kissing and embracing the actress and it’s no surprise she’s caught his eye as she put on a gravity-defying display in extremely low-slung leather trousers and a matching crop top. 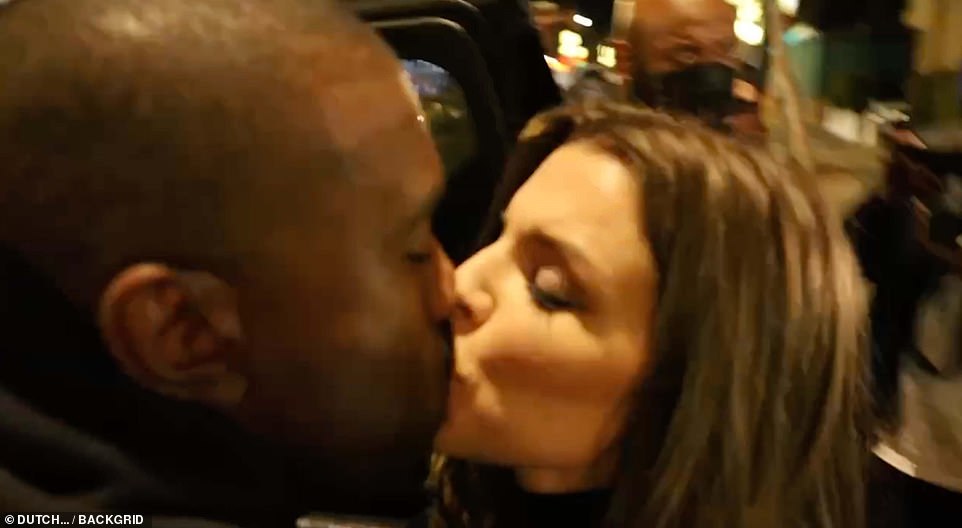 They’re not hiding it! Following their night out, Kanye made it clear he was still determined to flaunt his new romance with his girlfriend, as they exited the restaurant together

Getting up close to the cameras, Julia leaned in for a kiss with her new beau Kanye, after they enjoyed a star-studded dinner together.

The Like A Prayer singer’s caption appeared to be referencing her long-gestation biopic.

In 2020, fans began speculating that Madonna might have her eye on Ozark star Julia Garner to play her after she began following the actress on Instagram.

In January 2021, an insider close to the singer claimed to The Mirror that Garner was a fan favorite, but Madonna (born Madonna Ciccone) was interested in Little Women star Florence Pugh to play a young version of herself.

Julia is a fairly new actress who stood out thanks to her feature debut opposite Adam Sandler in the critically acclaimed thriller Uncut Gems. 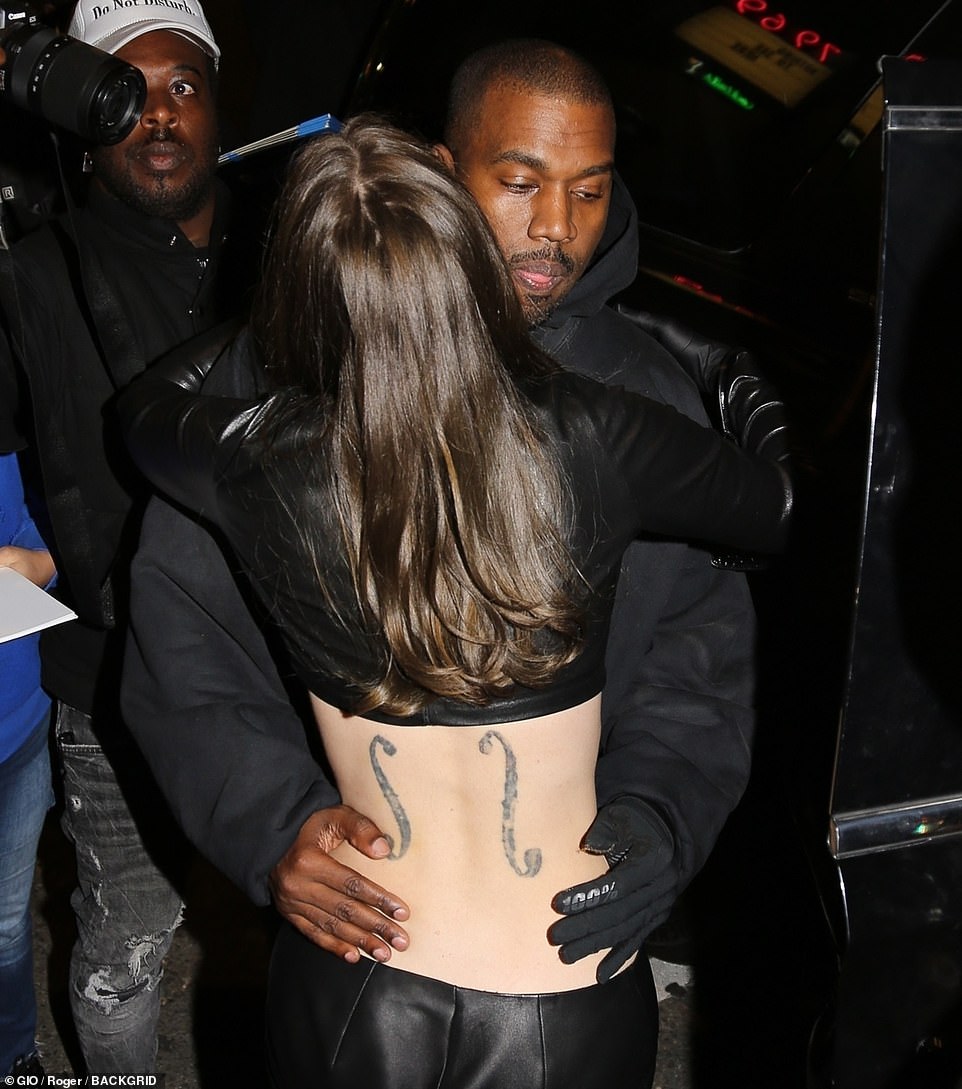 Together: Putting on a show for waiting fans, the rapper was seen kissing and embracing the actress as they left the swanky eatery

Since then, she has received strong reviews for the BDSM-themed independent film PVT Chat, and she had a major supporting role in Steven Soderbergh’s acclaimed neo-noir crime thriller No Sudden Move.

Julia and Kanye have been nearly inseparable since they first met on New Year’s Eve at a surprise performance the rapper put on in Miami.

Two days later, they had a date in Miami at the Italian restaurant Carbone, which is apparently a favorite of the hitmaker.

Leading ladies: Ozark star Julia Garner was rumored by fans to be in the running for the lead part after Madonna followed her on Instagram. But a source told The Mirror that the singer was eyeing Florence Pugh for the part last year

At the time, a source told Page Six that the dinner date was ‘nothing serious,’ but the two were back for more later in the week when they attended the acclaimed Slave Play on Broadway in New York City.

They followed up their evening at the theater with another dinner at Carbone, this time at its New York location.

While it was previously reported that Kanye’s new romance has gotten under the skin of his estranged wife Kim Kardashian, sources claimed earlier this week she thinks it’s ‘a good thing’.

The SKIMS mogul is said to believe that Julia being a Kardashian devotee could mean positive things for their co-parenting relationship according to a report by TMZ.

Sources close to Kim told the publication that she is happy to see the Donda artist smiling again and hopes to see him with a good person. 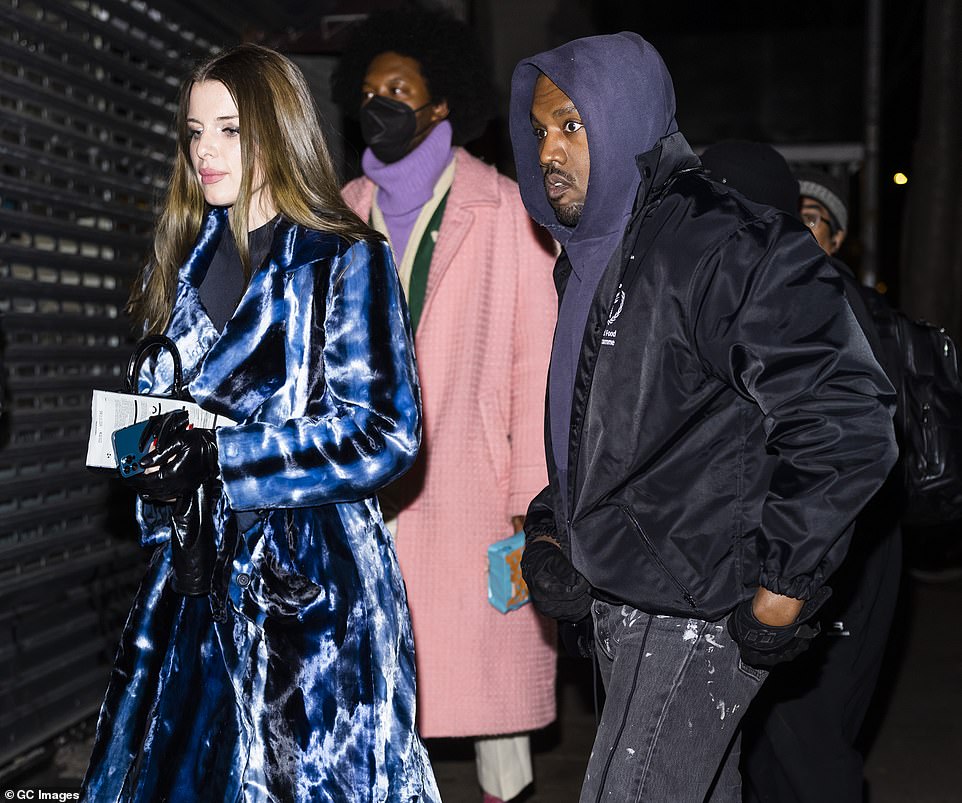 It comes after Julie detailed her whirlwind romance with Kanye after the pair went public with their romance.

In a new profile on the rising star from The Cut, the actress admitted it’s ‘all happening so quickly’, adding: ‘I’m going with the universe and the flow and seeing where it takes me,’ before adding, ‘…where it takes all of us.’

She also received praise from her friend Cat Marnell, who said: ‘She’s a legitimate sorceress. She’s the Michael Jordan of vixens… She’s devastating, like a hurricane.’

Julia penned a 217 word account on her first two dates with the rapper, which included a trip to New York City. 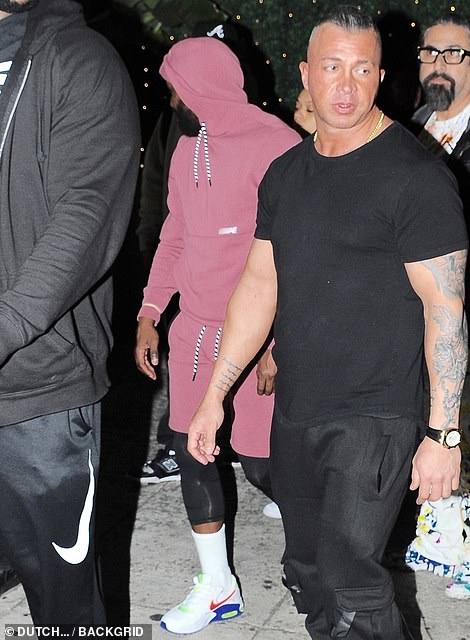 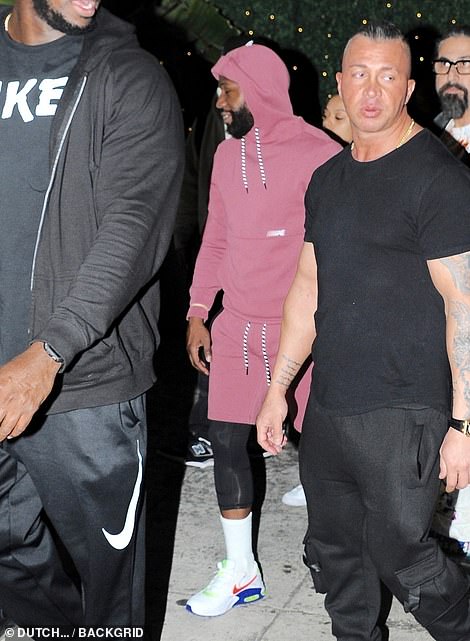 So many stars! Ahead of the dinner Floyd was seen arriving at Delilah with his entourage in tow, opting for a casual pink hoodie and matching shorts

Detailing their ‘instant connection’ after meeting in Miami on New Year’s Eve to Interview Magazine, she described the star’s generosity and ‘fun’ energy.

The article also contained a slew of images documenting their epic night out, from the many kisses they shared to the hotel suite full of clothing Kanye had surprised Julia with.

‘He had me and my friends laughing, dancing, and smiling all night. We decided to keep the energy going and fly back to New York City to see Slave Play,’ she gushed. 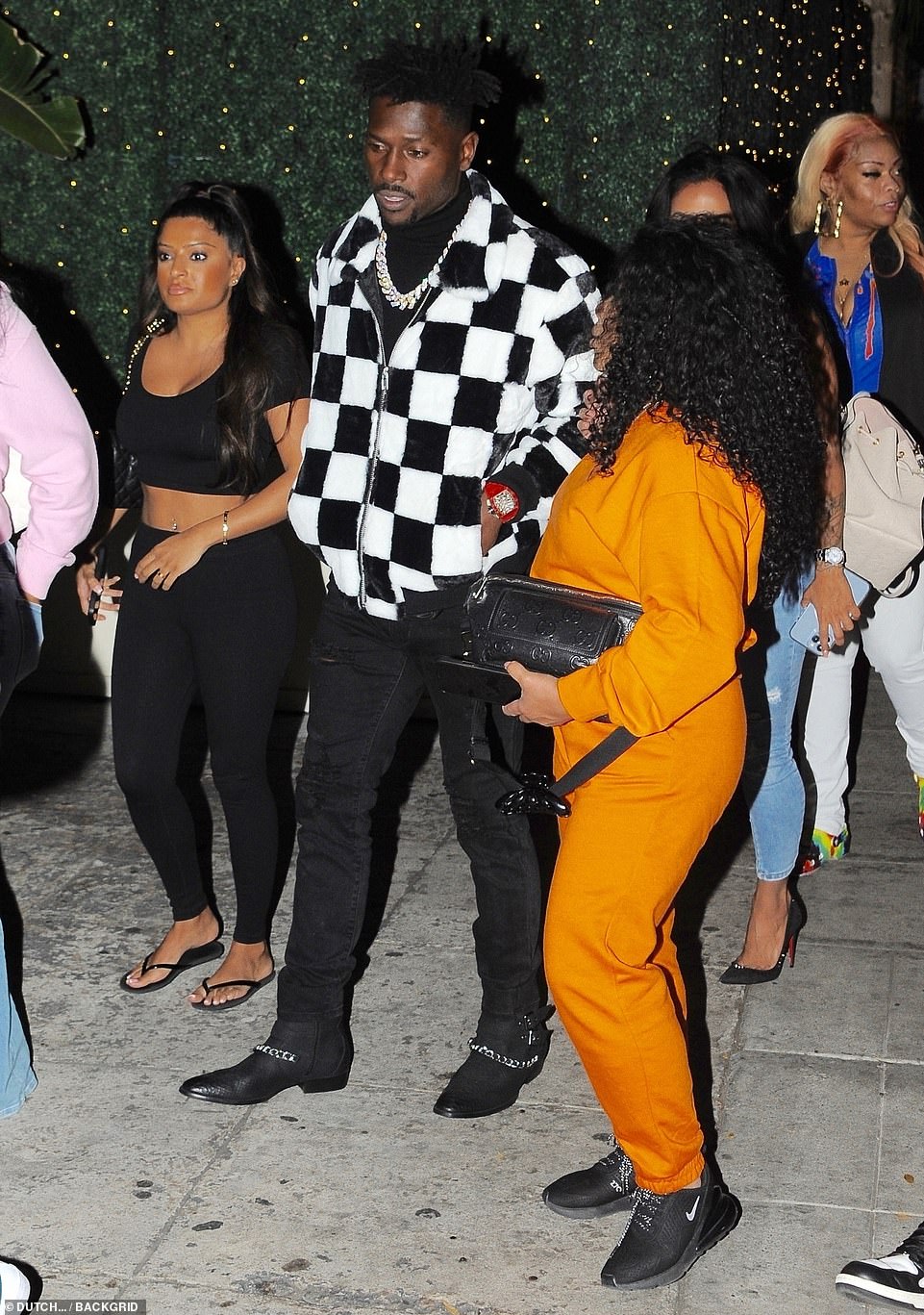 Who else? Antonio was also seen making his arrival with a bevvy of beauties

The Uncut Gems star continued: ‘Ye’s flight landed at six and the play was at seven and he was there ON TIME. I was impressed. After the play we chose to do dinner at Carbone which is one of my favorite restaurants.’

‘At the restaurant, Ye directed an entire photo shoot for me while people dined,’ she added. ‘After dinner Ye had a surprise for me. I mean, I’m still in shock. Ye had an entire hotel suite full of clothes.’

She said the move was ‘every girl’s dream come true’ and ‘felt like a real Cinderella moment.’

‘I don’t know how he did it, or how he got all of it there in time. But I was so surprised. Like, who does things like this on a second date? Or any date!’ she marveled.

Fox concluded her piece: ‘Everything with us has been so organic. I don’t know where things are headed but if this is any indication of the future I’m loving the ride.’

Julia shares a son, 11-month-old Valentino, with her estranged husband Peter Artemiev, whom she wed in 2018.

But last month she called out the private pilot in a brutal series of Instagram Stories posts in which she accused him of being a ‘dead beat alcoholic drug addict dad.’

She included a photo of him and captioned it, ‘Have you seen this deadbeat dad?’ and said he be found ‘at most strip clubs, Lucien, Paul’s [Baby Grand], Casablanca, the streets etc.’ 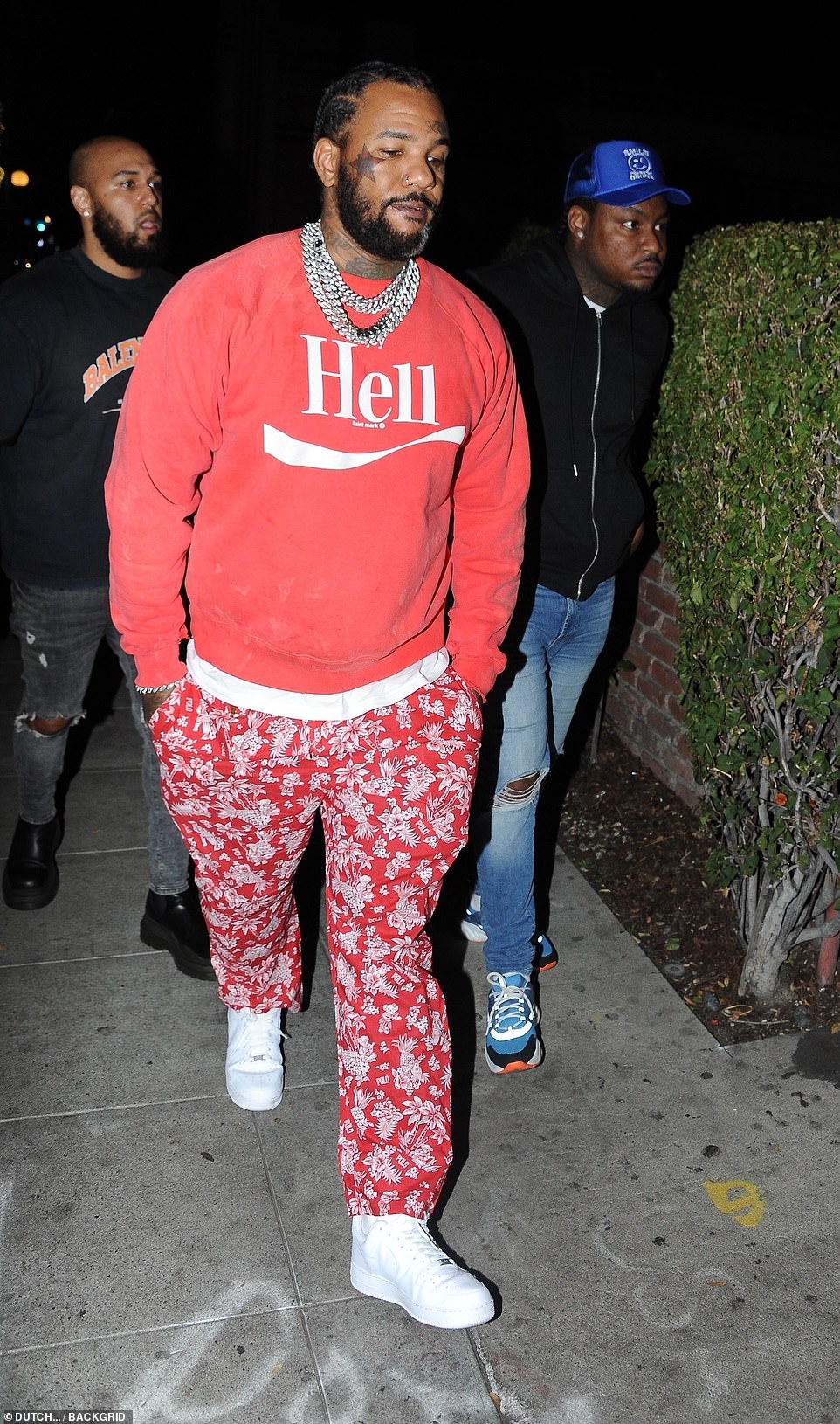 Casual figure: The Game was also seen with the stars, sporting a salmon and red printed ensemble