The parents of adopted twins who accused them of ‘sexual and physical abuse’ are being ‘rail-roaded’ according to attorneys.

Two starkly contrasting accounts have been revealed – one from the 22-year-old women who told of their harrowing escape and the other from parents Mirko and Regina Ceska of their battle to keep the twins safe.

They women claim the Ceska’s, who they described as ‘Doomsday preppers,’ forced them to carry out excessive labor each day, deprived them of food, and that Mirko  both physically beat them, including with a metal objects, and sexually abused them.

The parents, who were described as loving family living off the land, told of their struggle to guide ‘two unruly girls with a penchant for lying and behavioral problems,’ the Tallahassee Democrat reported.

The events that occurred within the Ceskas’ three acre home in Crawfordville, Florida, remain cloudy and conflicting.

Mirko Ceska (above), 58, appears in a Wakulla County courtroom for his arraignment on charges of sexual battery, sexual assault, abuse and neglect on July 17 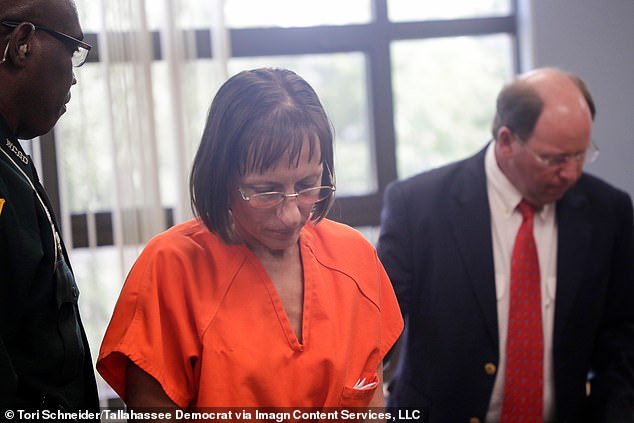 On the night of the women’s ‘escape’ on June 30, they texted a friend asking to the person to ‘come and get them’ and fled their rural abode shortly after midnight.

They claim to have gotten ‘cold feet’ while trying to leave the family nearly a decade earlier. But after their father, who adopted them at the age off 11, allegedly stuck one of them with a metal pipe they knew they had to escape.

‘God has the perfect timing for us, so we snuck down the stairs but they were squeaky,’ one twin told detectives, as reported by the Democrat. ‘We made it downstairs and made it out of there. We’re free and it feels good.’

The twins were whisked away to a secret location and later their parents would be arrested – armed with photographs taken of wounds following the earlier alleged attack.

While the Ceskas’ were being held on July 12, police raided their home on Lonnie Raker Lane and discovered a trove of weapons including 28 handguns, 14 assault rifles and over ten cases of ammunition hidden behind walls and under a staircase.

The horde furthered the claims that the parents were ‘Doomsday preppers,’ as the women had claimed. A statement that was later played down by their attorney Don Pumphrey, who according to the Democrat, described the couple as being ‘prepper’ for a ‘hurricane or nuclear attack’ but ‘not the Doomsday variety.’

Mirko, 58, would be charged with battery, aggravated battery, sexual assault and first degree sexual assault on minors between 12 and 18 in his custody. He was later released on $50,000 bail bond.

Regina, 55, was also released on charges, after being charged with failing to report abuse of a cognitively disabled or otherwise impaired adult and neglect of an adult in her care.

‘These people are getting railroaded,’ Pumphrey told the site, describing the twins as ‘pathological liars who fabricated evidence.’ He denies the couple’s guilt for any of the charges.

‘Without a doubt they are innocent… These are patently false accusations being made by the girls,’ he added. 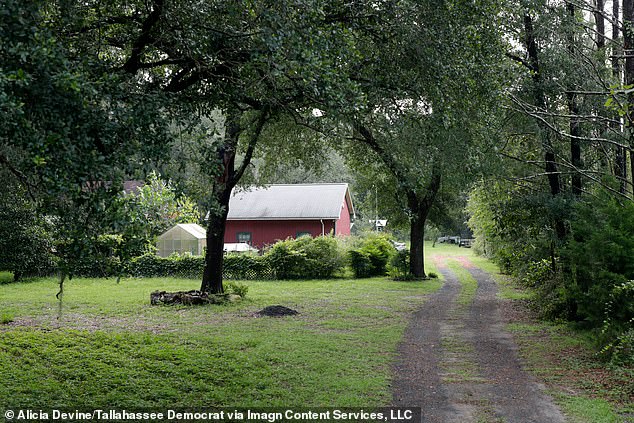 The Ceskas’ home on Lonnie Rake Lane, in Crawfordville, Florida, where the incidents alleged by their 22-year-old adopted twins took place 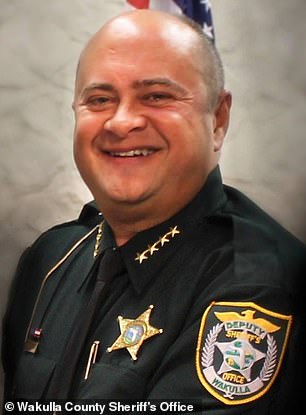 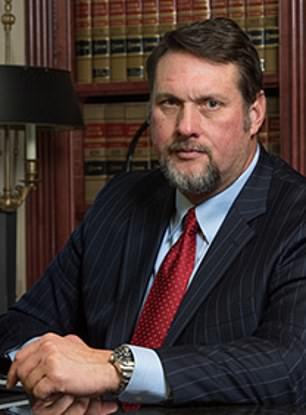 Sheriff Jared F. Miller (left) of Wakulla County Sheriff’s Office, was part of the team to arrest the Ceskas’ and revealed some of initial alleged details online. Defense prosecutor Dom Pumphrey (right), who is representing Mirko, denies all of the allegations and has stated that the girls are pathological liars

During their time living with the Ceskas, the twins claimed they were forced to carry out chores every morning at 5.30am, which included feeding farm animals, working in the garden, housework and more.

While under questioning, a detective with psychological training and the case coordinator both noted that the women appeared to become agitated when asked certain questions and seemed ‘immature’ for their age.

An account claimed that they both believed they lived in Santa Claus, the Democrat wrote, and that it was like talking to a child between the ages of 11 or 12.

The women said they had been abused when they were young and had hoped for a new life upon being adopted by the Ceskas, the site reported.

One of the twins alleged that at the age of 16 she was abused and raped by her father. She claimed that it started during a family vacation, when her father touched her breast and from there the abuse allegedly escalated into sexual intercourse on a regular basis.

The second twin said that her father started sexually touching her at the age of 18.

They claim that after Regina became aware of what was happening she took her husband’s side, and also ignored Mirko physically abusing them with his fists as well as metal objects, shoes, keys and more.

‘There have been times he would say I’m going to kill you, and she would say “back away Mirko, they’re not worth that,”‘ one twin alleged, according to the Democrat.

Pumphrey says the Ceskas never hurt the children in any way. 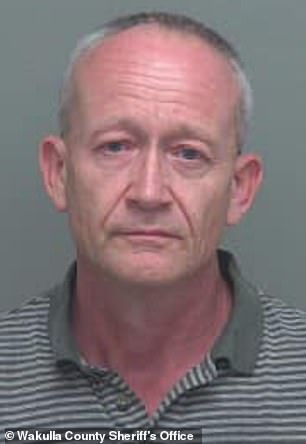 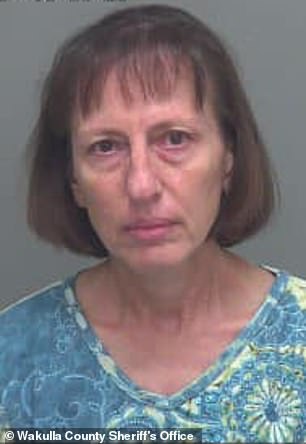 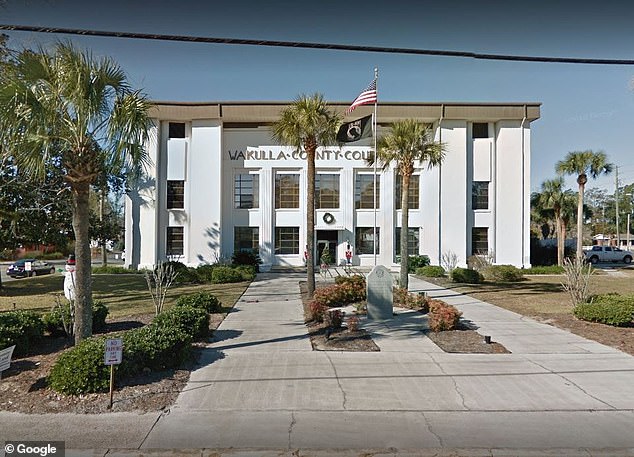 They appeared at Wakulla County Courthouse to hear charges formally read to them, including battery and sexual assault, they deny all of the claims

The twins say that food was used as a punishment and was regularly withheld if they refused to have sex with Mirko or let him grope them, the Democrat reported.

During the police’s raid of the Ceska’s home on July 12, they found a homemade videotape that showed Mirko screaming at the twins while holding a food wrapper.

The twins also claimed that Mirko would wipe food on the floor before forcing them to eat it and other times refused them meals entirely.

‘They also told us not to talk about what happened at home and to keep quiet, but I’m not going to do that,’ one of the twins said.

Pumphrey continues to deny the couple did any of the incidents alleged by the twins.

‘My understanding is they’re 22 with a lot of problems but absolutely know what they’re doing,’ he told the Democrat.

Regina’s attorney Fred Conrad believes the case outcome will depend on whether the twins are deemed disabled, considered to be vulnerable adults or able to live on their own.

‘We’ve just got the tip of the iceberg here,’ Conrad told the Democrat. ‘These are nothing but a nice, tight-knit family that love each other very much and their world has been turned upside down.’

Law enforcement officials have since sent items away for crime lab analysis including condoms and pregnancy kits found in the parents bedroom and bedding.

The lead prosecutor on the case, Assistant State Attorney Brian Miller, said he is confident in the ongoing investigation.

‘Probable cause has been found… We are still investigating to see if we proceed to trial,’ Miller told the Democrat.

The Ceskas have made their first appearances at Wakulla County court and have both since been released them on bond. Prosecutors have 175 days from the date of the Ceskas’ arrest to finish the investigation, file the charges and go to trial.

The twins are reported to be happy where their adoptive parents cannot find them.

Timeline of the Ceska’s story so far

2010 – The twins called 911 after an alleged assault in November. Police deputies responded to the scene and reported that ‘everything checked secure.’ The twins claimed they got ‘cold feet’ and lied to deputies

June 30, 2019 – One of the twin’s texted a friend asking them to come and collect them, after Mirko allegedly struck one of them with a metal pipe

July 1, 2019 – At 12.06am, the twins sneaked out of their family home on Lonnie Raker Lane. The Ceskas woke-up to find the girls had gone missing and filed a missing person report at 6.53am. The Ceskas emptied their adopted children’s savings accounts. They visited the nursery where the twins had worked, employees did not know where they were

July 2, 2019 – Regina called the Sheriff’s Office twice to ask about the location of her daughters. Later, a lieutenant called her to say the case was closed. At 5pm, the Ceskas returned to the nursery again, the staff still did not know where they were. By 8pm, the twins who feared being ‘found or killed’ moved to an undisclosed location paid for by anonymous donors. There they were given aliases

July 3, 2019 – Mirko called the twins’ boss at the nursery to ask if they had said anything bad about them and stated that if they did it was not true

July 7, 2019 – Unable to find their daughters, the Ceskas met with the local criminal investigation unit. They were told that the twins were adults and did not want contact with them

July 11, 2019 – A detective called Regina to say that she had concerns about a man one of the twins was trying to get in contact with. The Ceskas were asked to come into the station the next day.  The Ceskas went to the nursery for a fourth time. Once in the parking lot it’s alleged that Mirko yelled at staff, wanting to know why police wanted to speak with him

July 12, 2019 – The Ceskas arrived at the Sheriff’s office. A detective told Mirko that there were investigations into allegations that he had sex with one of his adopted daughters. Mirko was arrested and transported to jail. Regina was told of the investigation and remained silent until she had an attorney present. While being detained, Wakulla sheriff and his deputies, as well as state law enforcement officers searched the Ceskas’ house. They found 28 handguns, 14 assault rifles and over ten cases of ammunition hidden behind walls and under a staircase

July 15, 2019 – Regina, 55, was charged failing to report abuse of a cognitively disabled or otherwise impaired adult and neglect of an adult in her care and later released

July 17, 2019 – Mirko was charged with battery, aggravated battery, sexual assault and first degree sexual assault on minors between 12 and 18 in his custody. released on $50,000 bail bond