Adam Crapser lives in limbo, a stranger in South Korea, the country of his birth.

Forcibly separated from his wife, children and friends in America, he is isolated by language and culture, left alone to navigate this sprawling city he’s been expelled to four decades after being sent to adoptive parents in Michigan at age 3.

Crapser was abused and abandoned by two different sets of adoptive parents in the United States then deported after run-ins with the law because none of his guardians filed citizenship papers for him.

He told The Associated Press in an interview that he has struggled in South Korea with intense anxiety and depression, even as he searches for answers about why his life has become defined by displacement.

That search has led him to file a landmark lawsuit against South Korea’s government and a private adoption agency, the Seoul-based Holt Children’s Services, over what Crapser calls gross negligence regarding the way he and thousands of other Korean children were sent to the United States and other Western nations without accounting for their future citizenship.

The 200 million won ($177,000) civil suit, which was described exclusively to the AP ahead of its expected filing Thursday by Crapser’s lawyers in a Seoul court, exposes a dark side of South Korean adoptions, which exploded as a business during the 1970s and ’80s when many children were carelessly and unnecessarily removed from their families.

The country was then at the height of a so-called ‘child export’ frenzy pushed by military dictatorships that focused on economic growth and reducing the number of mouths to feed.

There was no stringent oversight of adoption agencies, which were infamous for aggressive child-gathering activities and fraudulent paperwork as they competed to send more children abroad at faster speeds.

Crapser’s case also highlights the shaky legal status of possibly thousands of South Korean adoptees in the United States whose parents may have failed to get them citizenship. 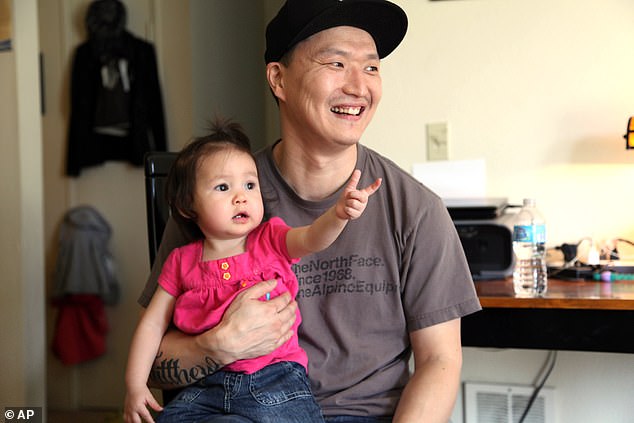 Adam Crapser poses with daughter, Christal, 1, in the family’s living room in Vancouver, Washington, on October 26, 2016 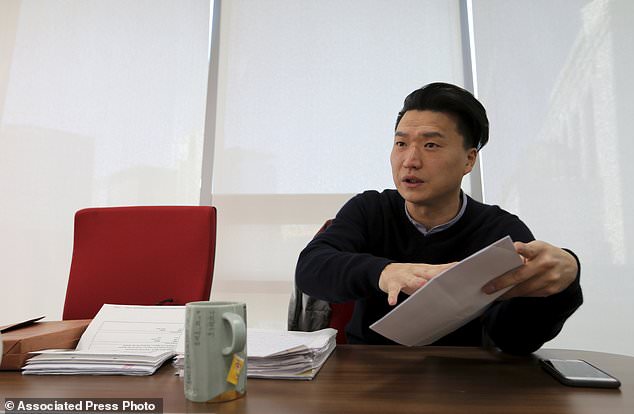 This potentially leaves them vulnerable to deportation if they acquire a criminal record in a country that’s becoming increasingly aggressive about going after undocumented immigrants.

Crapser, who was named Shin Seong-hyeok by his Korean mother, is one of five adoptees who the Seoul government confirms now live in South Korea after being deported from the United States.

Several of the deportees have reportedly dealt with mental health issues and served jail time in South Korea for assault and other crimes.

Activists say the South Korean government has done a poor job tracking deported adoptees and that the real number is almost certainly larger. Officials wouldn’t provide details about the other deportees.

In South Korea, human rights lawsuits against the government can drag on for years and are rarely successful because the burden of proof in non-criminal cases is entirely on the plaintiffs, who often lack information and resources. 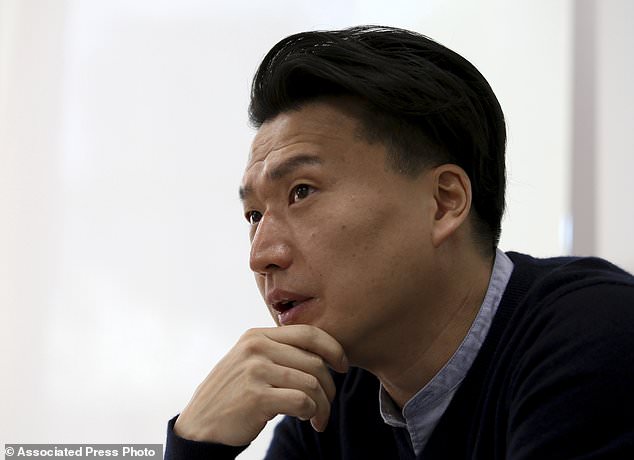 Crapser, who was named Shin Seong-hyeok by his Korean mother, is one of five US adoptees who the Seoul government confirms now live in South Korea after deportation

Even if Crapser wins, the payout will likely be significantly smaller than what was demanded, considering past cases, according to Soh Rami, one of his lawyers.

Crapser said the amount of money is less important than forcing officials from Holt and the government into a courtroom to face questions of accountability. He said the government and Holt are responsible for failing to follow through on his adoption and ensuring that his American parents naturalized him.

Because he wasn’t a citizen, US Immigration and Customs Enforcement officials ordered him deported in November 2016 over criminal convictions, including unlawful possession of a firearm and assault.

His lawsuit will also attempt to hold Holt and the government accountable for supposedly fraudulent paperwork over his adoption status. Most South Korean adoptees, including Crapser, were documented as abandoned, even in cases where they had known parents or were simply lost, which made them easily adoptable under US laws.

He also seeks to hold the government responsible for allowing foreigners to adopt babies without actually visiting South Korea, which Crapser blames for screening failures that led to his adoption by abusive parents.

Kim Ho Hyun, Holt’s president, said the agency followed the laws and procedures of the time and that it was mainly the responsibility of US parents and institutions to ensure that adoptees obtained citizenship.

Seong Chang-hyeon, an official from South Korea’s Ministry of Health and Welfare, said the government is trying to improve welfare services for deported adoptees while also consulting with Washington over possible US legal changes that could prevent adoptee deportations.

Currently living in a cramped one-bedroom apartment in Seoul, Crapser said the deportation has seriously strained his marriage and he often sinks into dark moods over his inability to be actively involved in the lives of his children.

He described the difficulties of being stuck in a country where he doesn’t speak the language, including dismissive treatment at public offices and monthly visits to a psychiatrist who can’t really speak English.

While he talked fondly about meeting with his Korean mother every few months, he also expressed frustration over what he sees as a social stigma against adoptees here. He has eight more years before he’s eligible to return to the United States.

About 200,000 South Koreans were adopted overseas during the past six decades, the majority to American couples. More than 4,000 Korean children were sent abroad in 1979, the year Crapser arrived in the United States.

Agency board members with ties to the military dictators of the day were less worried about child welfare than maintaining a business that brought in as much as $20 million a year by some estimates, critics say.

Reached on the telephone, Crapser’s birthmother, Kwon Pil-ju, sobbed and said she felt like she had ‘horribly sinned’ against her son. She said she was single, disabled and desperately poor, and that she finally decided to give her children away because of fears that they’d starve.

They also have problems communicating – he can’t speak Korean, she can’t speak English, and they don’t always have someone who could interpret.

Crapser said he ‘definitely didn’t win the lottery’ when it came to his American parents. He and a sister were sent to what he says was an abusive couple in Michigan in 1979.

Seven years later, the couple abandoned Crapser, then 10, and his sister, and he ended up with Thomas and Dolly Crapser, who he said would sometimes slam their children’s heads against walls, strike them with kitchen utensils and burn them with heated objects. Repeated calls to the Crapser home went unanswered.

In 1991, the couple was arrested on charges of physical child abuse, sexual abuse and rape. They were reportedly convicted in 1992 on multiple counts of criminal mistreatment and assault.

Kicked out of his parents’ house after an argument, Crapser pleaded guilty to burglary after he said he later broke into the home to retrieve a Korean-language Bible and a stuffed dog that came with him from a Korean orphanage. He was later convicted of unlawful possession of a firearm and assault.

Crapser thought he had turned a corner, opening a barber shop and an upholstery business and starting a family, when he was served his deportation paperwork in 2015 after a green card application triggered a background check.

‘It’s heartbreaking. A lot of the depression that I deal with, a lot of the hopelessness that I feel at times is attributed to the separation from my family that I created and not being able to be actually involved in their life every day like I was,’ he said.