An older sister of a missing six-year-old Hawaii girl who is feared dead told police their adoptive parents forced her to keep secret that her sister had died after they  locked her in a dog cage in the bathroom, with duct tape on her mouth and nose.

The distressing new details over the disappearance of Isabella Kalua were revealed in documents filed in court on Friday after the arrests of Isaac Kalua, 52, and Lehua Kalua, 47 on suspicion of second-degree murder.

During an interview with a detective on November 5, Isabella’s 12-year-old sister, identified by her initials I.M.K., said the Kaluas asked her about two months ago to not reveal the truth.

She told police that Isabella ‘was in the bathroom in a dog cage, duct tape on her mouth and nose, and she didn’t wake up,’ according to the police affidavit in support of warrants for the Kaluas’ arrests. 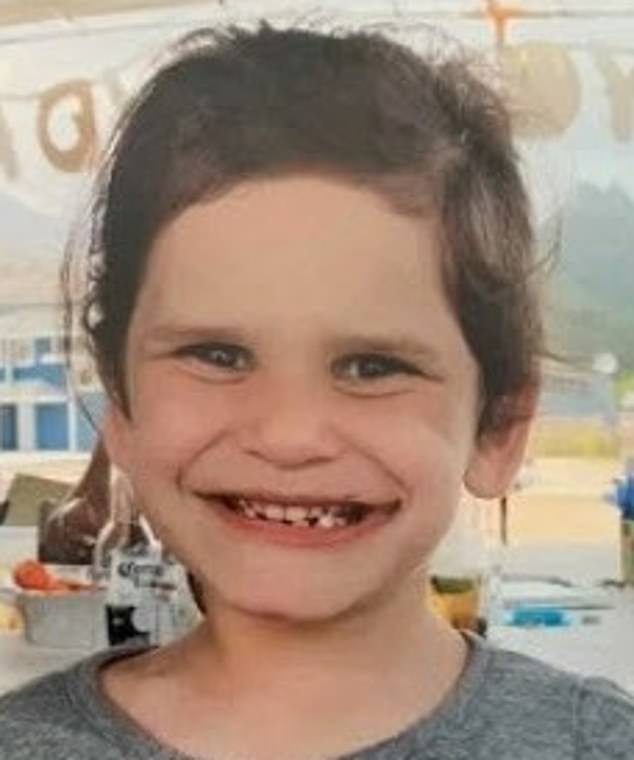 The parents of Isabella ‘Ariel’ Kalua have been charged with her murder. The girl was reported missing on September 13 but police say she’d been dead for a month. The cause of death is unclear and her body has not been found

The couple had adopted Isabella and two of her siblings and were foster parents to another biological sibling,

On September 13, the Kaluas reported to police that Isabella – also referred to by Honolulu police by her birth name of Ariel Sellers – was missing and that they had last seen her asleep in her room the night before.

The Kaluas claimed the girl had ‘wandered off’ in the middle of the night.

Police arrested the Kaluas last Wednesday, saying they believe the girl was killed a month before they reported her missing. Isabella’s body has not been recovered as of Monday.

The parents were being held without bail and appeared in court via video from a cellblock on Friday. They did not make any statements, reported Hawaii News Now.

A deputy public defender entered not guilty pleas on their behalf.

The sister said she knows Isabella is ‘dead because she was there,’ the court documents said.

‘Lehua then filled the bathtub with water and put (Isabella) in it to see if she would wake up, but it did not work,’ the documents said.

The sister had to help carry Isabella to their bedroom, the documents said.

The mother then drained the tub and a few days later, Isaac Kalua went to a hospital pretending he had COVID-19 symptoms, the documents said.

The sister told police she knew he was pretending because he took time off work to ‘help mom,’ the documents said, ‘to get rid of the stuff … evidence.’

The sister told police Lehua Kalua bought the dog cage on the internet even though they didn’t have a dog.

Kalua said she bought it because Isabella would sneak around at night and want to eat because she was hungry. 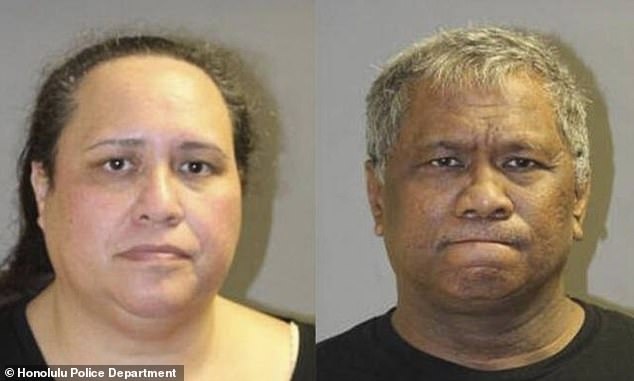 Lehua and Isaac’s 12-year-old adopted daughter told police the Kaluas asked her to keep secret that Isabella ‘was in the bathroom in a dog cage, duct tape on her mouth and nose,’ and that she died on August 18

The sister said Isabella would be hungry because Kalua wouldn’t feed her and the sister tried to sneak food to her sometimes, according to the court documents.

Isabella was kept in the cage in the bathroom at night, the sister told police.

After reporting Isabella missing, Lehua Kalua told police the girl had a habit of going into the garage and falling asleep and would sometimes leave doors unlocked, according to the affidavit. She also told police their home surveillance system constantly stops working.

According to the affidavit, police recovered surveillance footage on September 13 that showed Isabella was last seen on cameras on August 18.

During a news conference announcing the arrests of the Kaluas, police declined comment on why they believe Isabella is dead. The timing of the sister’s interview last Friday with the detective coincides with Honolulu police homicide Lt. Deena Thoemmes saying the case turned into a murder investigation at the end of last week.

An attorney who has acted as the Kaluas’ spokesperson, William Harrison, said he is not representing them in the case but has spoken on their behalf as a family friend.

‘All I can say is I’m obviously saddened by what’s written,’ he said of the court filing. ‘I don´t know the details.’

Meanwhile, Isabella’s biological family gathered outside the Kaluas’ home in Waimanalo, Honolulu, as police and FBI agents continued the search for the girl’s body. 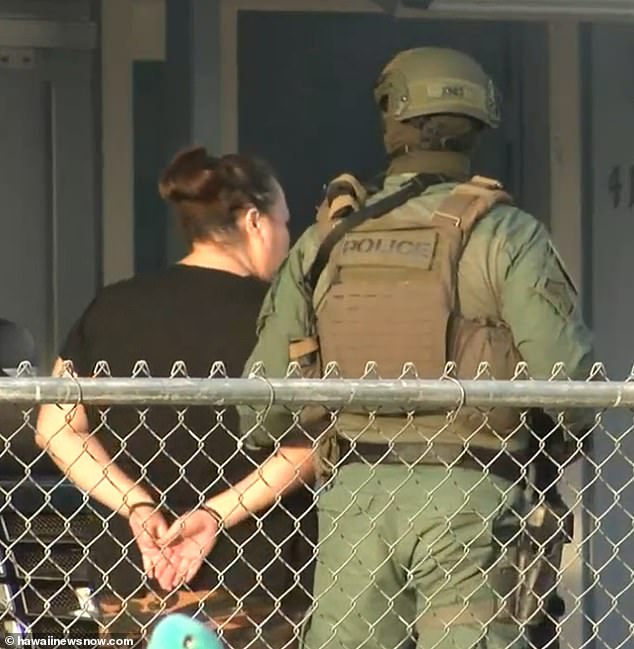 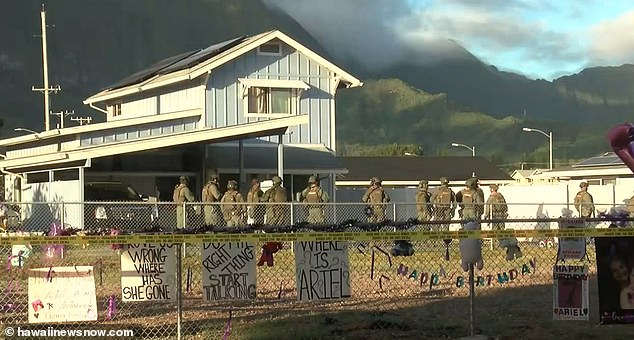 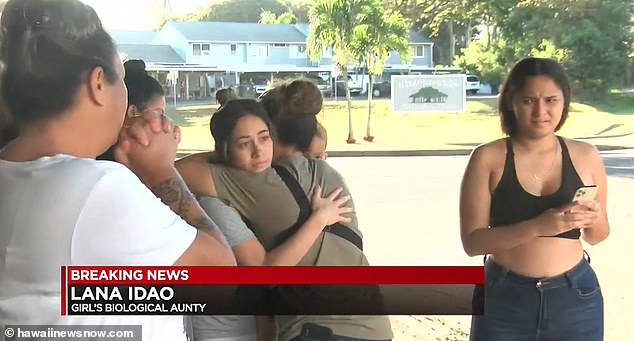 ‘Everyone’s very disgusted and hurt,’ the child’s aunt, Alena Kaeo, said. ‘And this has definitely given me more of a boost to fight for the [sisters] to bring them home safely, where they belong with us as biological family members.’

Isabella was adopted by the Kaluas just two years ago out of foster care. She was removed from her biological family when she was one.

In the two years since she has lived with the couple, she has suffered two serious injuries, but in both cases, the Department of Child Services ruled no foul play had taken place, Hawaii News Now reports.

In October 2019, she suffered a broken finger, which the couple claimed came from her slamming her hand in a door. Four months later, she returned to the hospital with a broken leg, which her parents said was from a trampoline injury.

The Kaluas told police on September 13 that she had left their home in the middle of the night and that she often slept outside.

Police say that was a lie and that the girl had been dead for a month, but they have not revealed what evidence they have that points to that conclusion.

It’s unclear how Isabella died, or what kind of evidence police have against the pair, but detectives say they are confident the evidence points ‘to them and no one else’.

‘At the onset there was a lot of questions Some things just weren’t adding up for us in the last week to ten days some evidence has come to light,’ said Honolulu Police Department Interim Chief Rade Vanic at a press conference last Tuesday.

The girl’s biological aunts had been campaigning on Facebook and in the community for police to do more to question the adoptive parents sooner.

They said they were convinced all along that the couple had something to do with her disappearance.

The adoptive parents are being held in custody without bond pending their next court appearance on November 26. 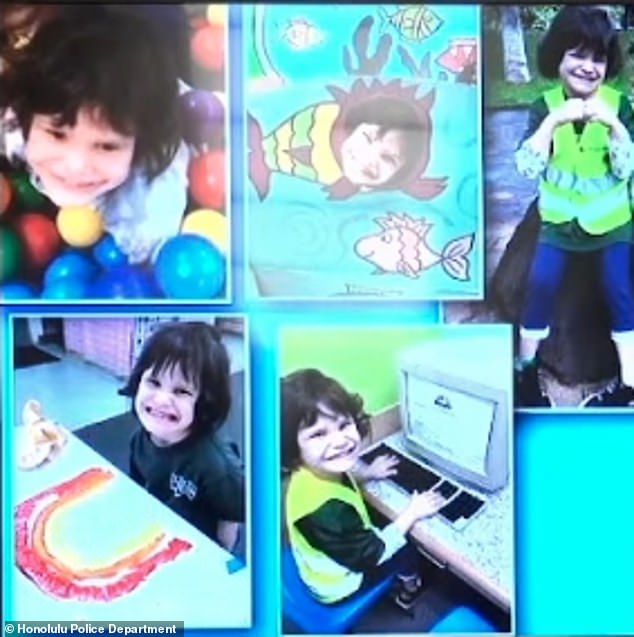 These are recent photos of Ariel, taken after she went to live with her adoptive parents two years ago 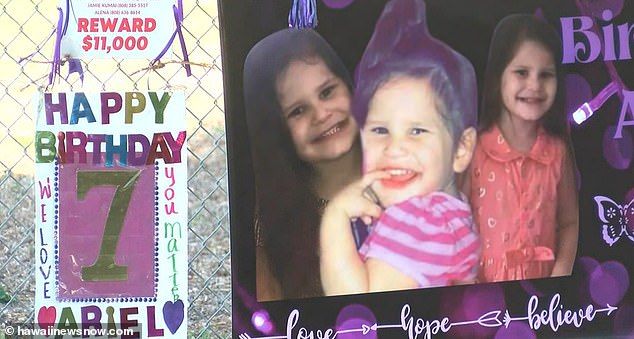 Some in the community say the girl was happier when she was in foster care. She is shown in photos taken before she went to live with the Kalua family