What a Dumbo! Adorable elephant calf takes a tumble as he tries to jump into the dirt before getting back up as if nothing had happened

Every youngster loves nothing more than playing in the dirt – even this baby elephant.

But when he tried to get closer to the inviting dust at the bottom of a dip, his unsteady legs gave way, and he took a tumble.

Unharmed and unruffled, the calf got back up again and just carried on playing as though nothing had happened.

The scene was captured on camera by tour guide Kevin Dooley, 58, as he led a group through South Africa’s Madikwe game reserve.

Photographer Kevin Dooley, 58, was leading a safari trip in Madikwe Game Reserve, South Africa, when the group stumbled upon a group of elephants by a dust hole 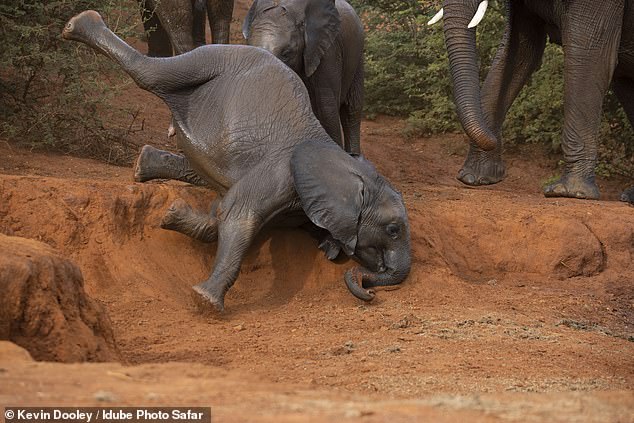 The safari tour guide, from New Mexico, US, quickly got out his camera as one young elephant slipped and fell as he tried to step down

He said: ‘A young elephant decided to take a dust bath in the red, iron-rich soil.

‘I saw him trying to figure out how to reach the dust, back and forth, trying to reach his foot to the ground. But he could not make the step down and took a fall.

‘The elephant was not injured in any way. 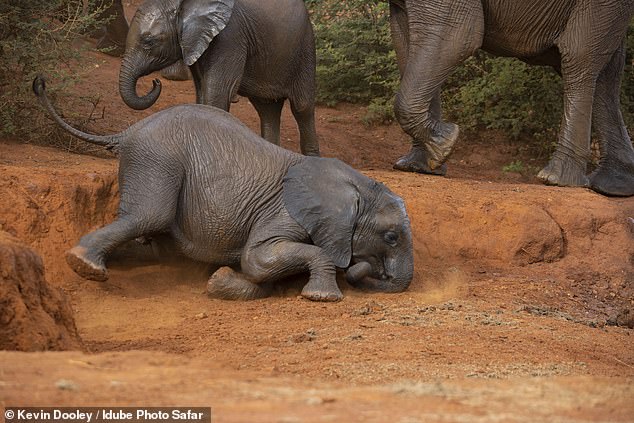 Luckily, despite the elephant taking a fall, it was unharmed and carried on playing in the dust as though nothing had happened

‘He enjoyed the tumble just like a small child would. I love any wildlife photos that tell a story and share the amazing things these animals do in the wild.’

The reserve attracts thousands of tourists each year. Visitors have included Barack and Michelle Obama and musicians Beyoncé and Jay-Z.