How do you wake up a sleeping skunk? Adorable footage shows the unusual pet in a deep slumber – until its owner rattles a packet of food

Hilarious footage shows a snoozing skunk suddenly leap up when its owner rustles a packet of food.

The creature can be seen dozing on its back with its limbs sticking up in the air, not moving an inch when her owner tickles her tummy and gently shakes her paw.

Nothing rouses the lazy mammal – until it hears the sound of a paper bag.

The clip, filmed in the UK, begins with the skunk, named Roo, lying motionless on its back as its owner tries to wake it up.

He jokes in a mournful voice: ‘She was a good skunk…’

But after 60 seconds of staying completely still, the owner makes one last attempt to rouse the sleepy creature.

The second Roo hears the rustling of the paper bag, she leaps up off her back and looks around animatedly for food.

Snoozing: Roo the sleepy skunk lies on her back with her limbs sticking up in the air and doesn’t move even when her owner tickles her tummy 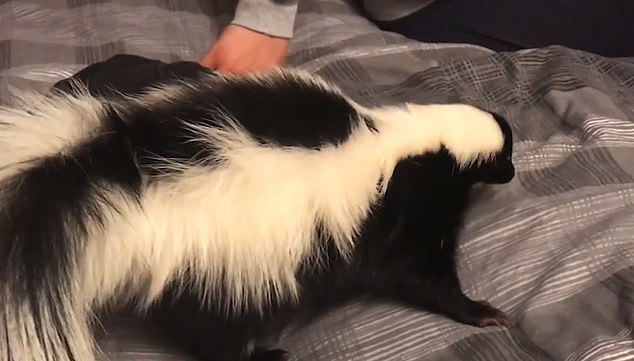 Where’s the food? Roo suddenly leaps up when she hears the rustling of a paper bag