While some of us revel in a soapy warm bath, others can’t think of anything worse.

This must have been the case for Clipper the adorable wombat.

The cute NSW wombat was captured recently being bathed by his carer, Donna Stephen, occasionally trying to wiggle free.

A cute NSW wombat was captured being bathed by his carer, occasionally trying to wiggle free 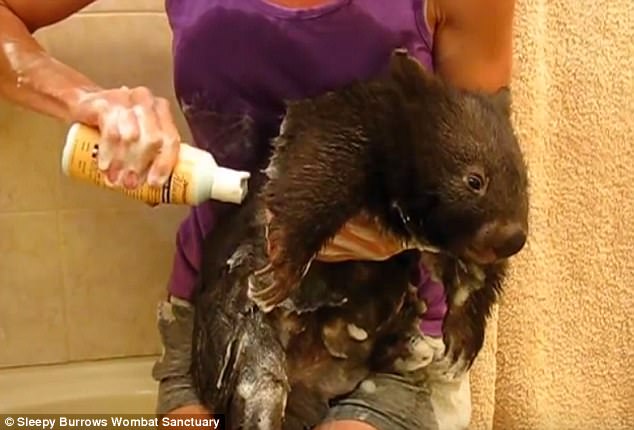 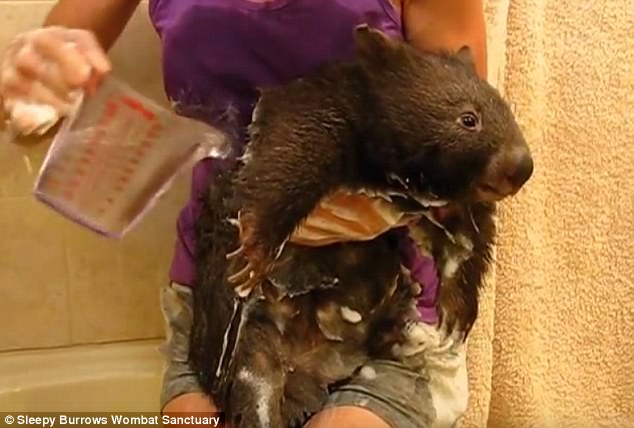 Ms Stephen told Daily Mail Australia while 20-month-old Clipper did squirm, it could have been a lot worse.

‘In terms of the damage he could have done with his claws and biting, he was incredibly sedate,’ Ms Stephen said.

‘It’s actually quite amazing how calm they actually are … it’s worse bathing my dog.’

While the passionate wombat carer had her hands full as she scrubbed her furry friend, Ms Stephen said she has been known to get in the shower with them.

‘It gets messy, I just go for broke, shut the shower doors, put the swimming costume on,’ she said.

‘It’s the easiest way to hold them under water.

‘When I finish bathing them, sometimes they get wind up their bum and they run and run and run … younger wombats tend to do that.’

Although Clipper was wriggly during his soapy bath, the young wombat was well behaved compared to some of the hundreds of wombats Ms Stephens has bathed.

Clipper’s first, and last, bath was to clear up a case of ring worms.

The furry wombat was handed into Sleepy Burrows Wombat Sanctuary, 30 minutes north of Canberra, when he was about six-months-old after someone found him being illegally kept by other people.

Ms Stephen said Clipper the ‘thriving young male’ was almost ready to be released back into the bush.