While new parents the Duke and Duchess of Sussex may have been out enjoying a Sunday night out at the Lion King European premiere this evening, it appears baby Archie was not forgotten.

Prince Harry, 34, and Meghan, 37, were presented with an adorable Simba toy for their new born son by two young girls at the event in Leicester Square this evening.

As well as brushing shoulders with stars of the film including Beyoncé and Seth Rogen, Prince Harry, 34, and Meghan, 37, were given a bouquet, a book and a Simba toy for Archie by Evie Chambers, 12, and Valentina Walker, 12.

The plush cuddly lion is one of a limited edition toy released Disney, with money donated from each sale donated to Wildlife Conservation Network in support of the Lion Recovery Fund and its local partners.

The girls described the moment meeting the royals as ‘amazing’, and revealed Meghan had inquired who their favorite character in the film was.

‘We said Simba and Nala,’ said Evie. ‘I told her [Beyoncé] this is for you and she seemed really delighted.’

The girls, who were chosen as their parents are associated with Disney, seemed overjoyed to have presented the royals with the adorable toy.

The plush special edition Simba and Nala lions represent one of the 40,000 lions Disney and the Lion Recovery Fund are working to ensure a future for lions in the wild. 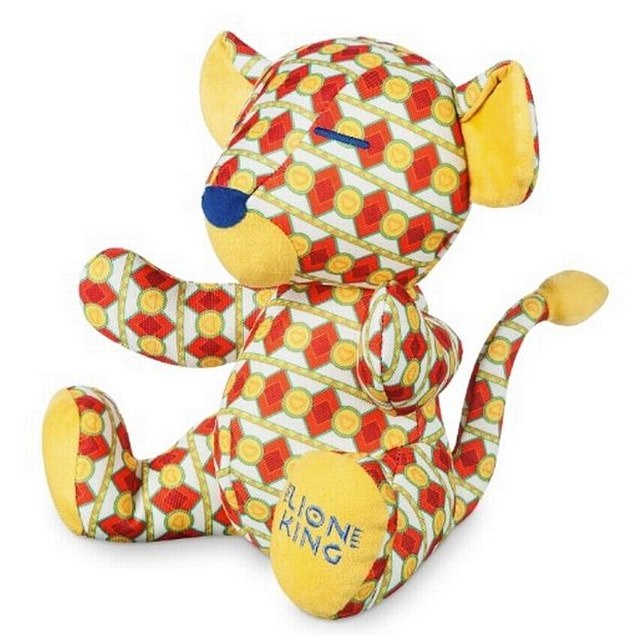 The Lion King toy is said to represent one of the 40,000 lions Disney and the Lion Recovery Fund are working to ensure a future for lions in the wild

The European premiere of the film was held in support of Harry’s conservation and communities work through The Royal Foundation.

For every one that is sold, Disney will donate to the Wildlife Conservation Network in support of the Lion Recovery Fund and its local partners.

Alongside the release of the film, The Walt Disney Company announced the launch of a global conversation campaign called Protect the Pride.

It will hope to raise awareness for the dwindling population of lions across Africa, and will be supported by the Royal Foundation. 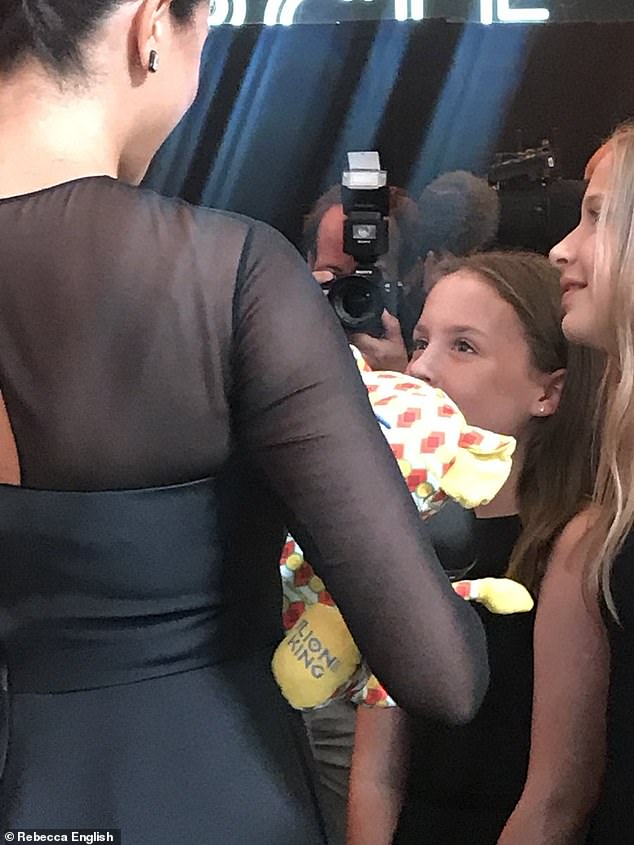 The little girls seemed delighted to present the royals with the gifts, which they said was for baby Archie 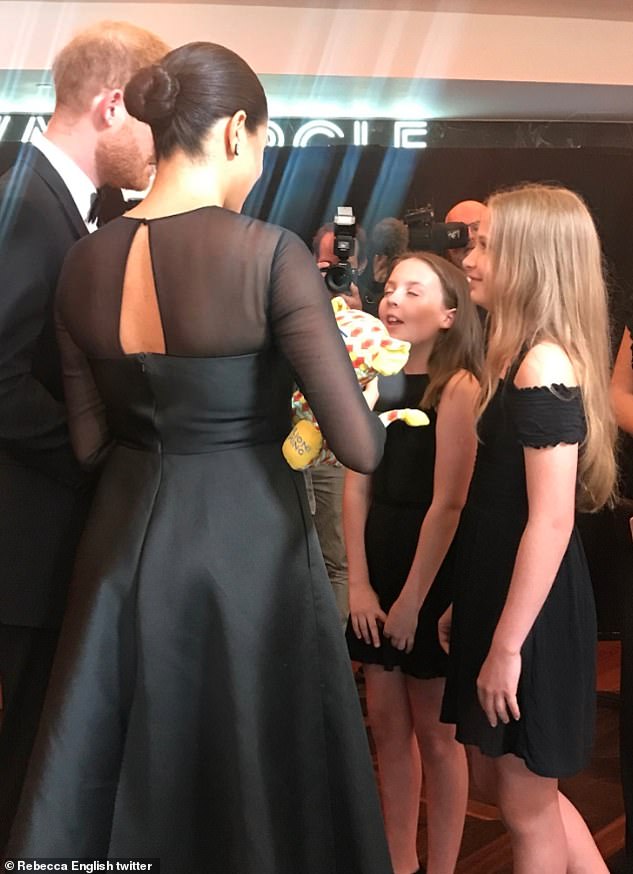 Evie and Valentina appeared excited to chat to the royals, having presented them with a gift for baby Archie

For the time being, the funds will be channelled through The Royal Foundation which the duke operates in conjunction with the Duke and Duchess of Cambridge and the Duchess of Sussex.

The royal couple met with representatives from organisations doing ground-breaking work in the areas of conservation and the environment.

Prince Harry has taken a keen interest in African conservation projects over the years, and supports a number of wildlife and community projects.

On leaving the Army in 2015, Harry spent three months working on number of such projects in Namibia, Tanzania, South Africa and Botswana. He is also President of African Parks and Patron of Rhino Conservation Botswana. 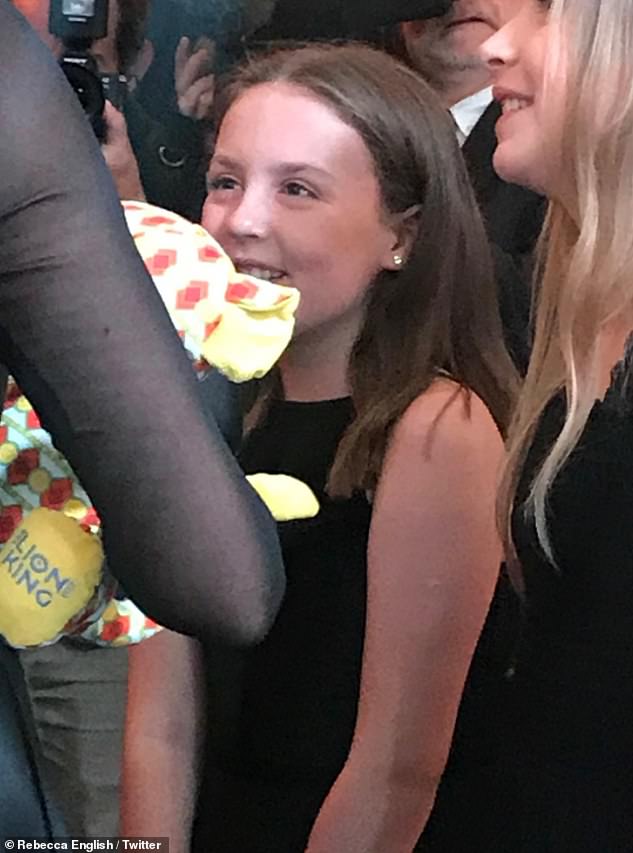 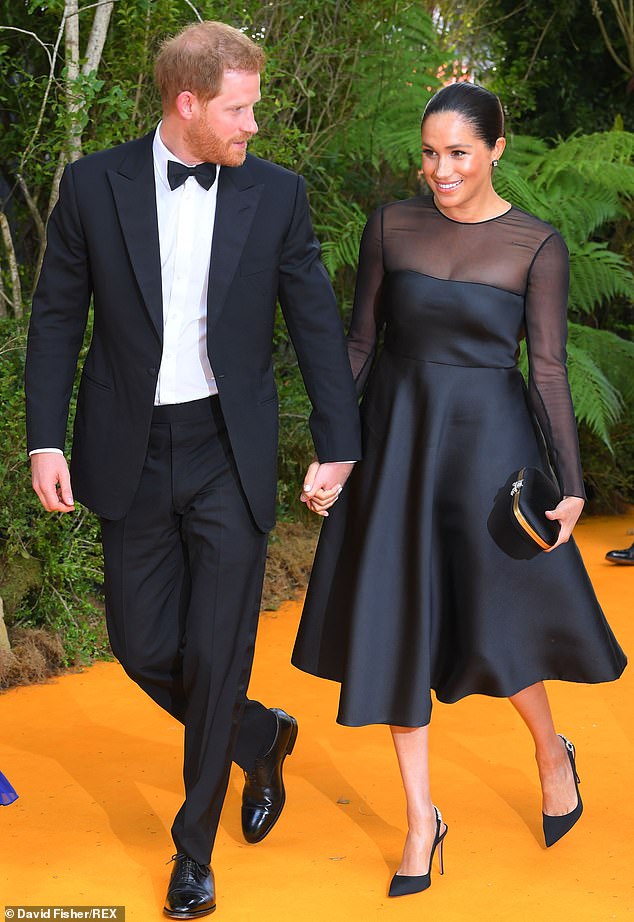 Meghan and Harry attended the event in Leicester Square tonight, was held in support of Harry’s conservation and communities work through The Royal Foundation

Buckingham Palace said: ‘The Duke of Sussex has taken a deep personal interest in frontline conservation projects that work to protect Africa’s natural heritage and support both wildlife and local communities.’

Several members of the royal family have confessed to the original Disney film being a favourite.

Prince Harry has previously mentioned watching it more than 20 times, and said he is able to recite the words and songs from heart. 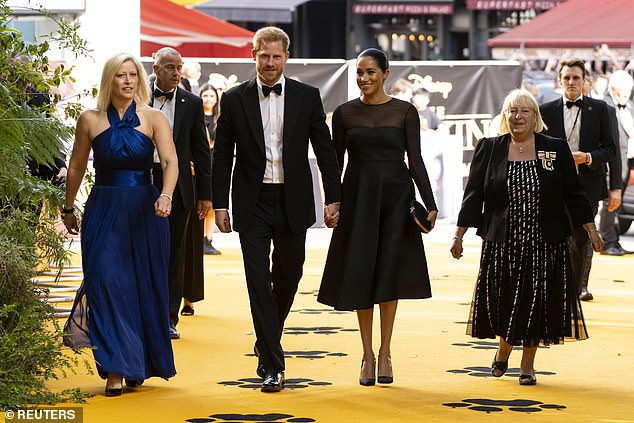 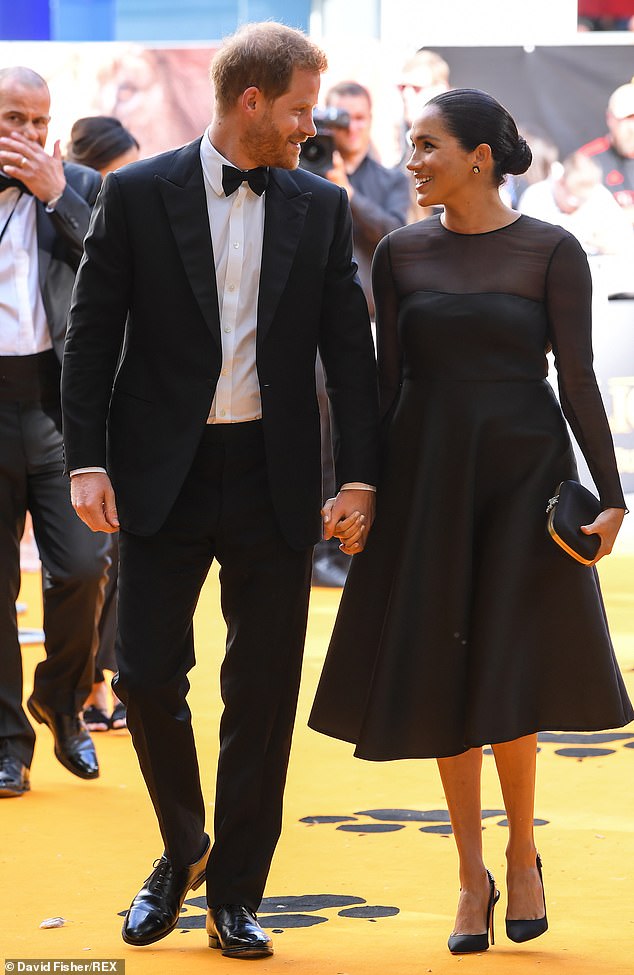 The couple looked delighted to be at the premiere, and are believed to have a personal connection with the Disney musical, attending a show in London for one of their early dates in December 2016

And he’s not the only royal to call it his ‘favourite film’, with sources saying little Prince George is also a huge fan of the animated movie.

It is also believed the film has special meaning to Harry and Meghan, who attended a West End production of the musical for one of their early dates in December 2016.

Sir Elton is also believed to have performed Circle of Life at the royal couple’s wedding reception at Windsor Castle in May 2018.