Adriana Lima was spotted looking sweaty and happy in Miami on Tuesday after leaving a tough workout at a boxing gym.

The 37-year-old smiled for cameras who captured her post-workout glow as she headed out of the gym in a pair of high top boxing shoes.

Fitness fiend: Adriana Lima was spotted getting her model body in shape on Tuesday as she was seen all sweaty after a workout 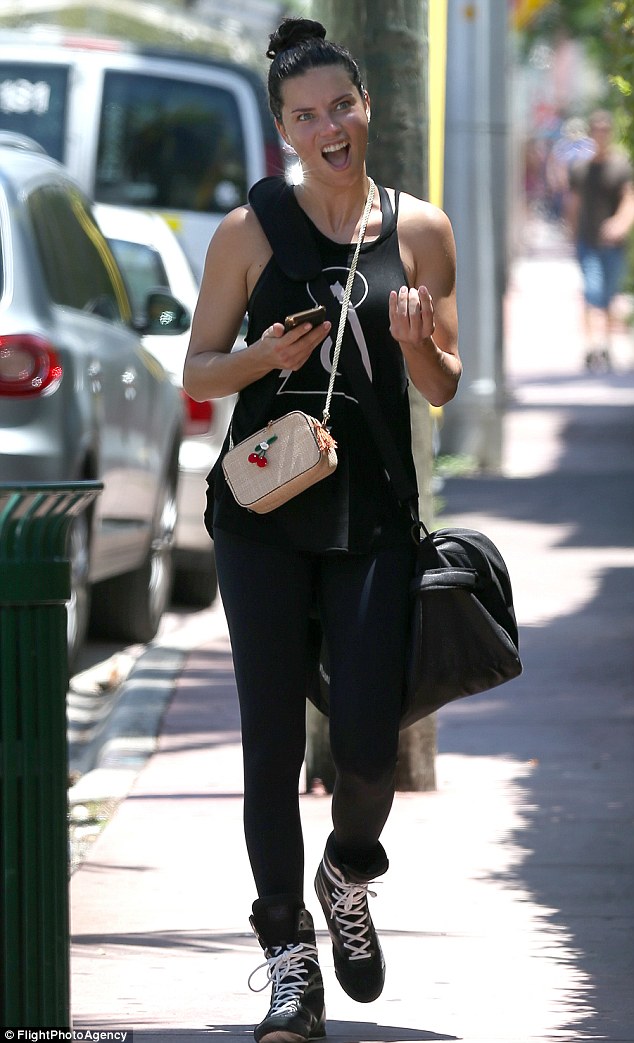 The Victoria’s Secret Angel kept her hair off her neck in a high messy bun as she was seen leaving her boxing gym du jour, the 5th St Gym.

She carried dueling accessories over each shoulder. An ultra feminine, petite woven cross body purse with cherry adornments and a functional, plain giant black gym back.

The model trotted down the sidewalk in black spandex leggings and a black workout tank top with a white graphic design on the front.

The Brazilian beauty carried a cell phone and flashed a megawatt smile for photographers. She even let loose for a moment with a wacky face and a rocker hand symbol.

Boxing is the go-to workout for the mother of two and she loves getting in the ring.

In June, the Mabelline spokes model posted a powerful throwback video from 2009 jump roping at a boxing gym shortly after having her first child.

The supermodel wrote in the caption that the video made her emotional because it brought her back to a difficult time just four weeks after giving birth to her daughter Valentina while she was recovering from a fractured knee and preparing for a runway show.

In 2016, Adriana told Harpers Bazaar that she throws jabs for more than just a good body. The mother of two explained that putting on her boxing gloves makes her feel powerful and strong.

While working out is good for the mind and soul, keeping her physique fit is part of her job.