Adverts for GP appointments via smartphones have been banned for failing to tell patients they must leave their current doctor.

They were also criticised for suggesting patients could see an NHS GP ‘in minutes’ when actually they had to be registered for up to three weeks beforehand.

The ads were for Babylon’s GP at Hand, a controversial service which enables patients to have virtual consultations with a family doctor if they de-register from their existing surgery.

It is currently only available to patients who live and work in London, but the firm is planning to expand nationwide, and has been heavily endorsed by the Health and Social Care Secretary.

GP at Hand is a controversial service which enables patients to have virtual consultations with a family doctor if they de-register from their existing surgery (pictured: one of the Facebook adverts for the service)

It said the service did not make it clear patients had to de-register from their own GP beforehand, that the sign-up process would take at least a week and they had to live and work in London.

The advertising watchdog said: ‘We told GP at Hand to ensure that future ads made clear that consumers would be replacing their current GP service with GP at Hand, that the service was only available to those that lived or worked within the catchment area of specific GP surgeries and that consumers would need to wait until they were registered with a GP at Hand surgery before being able to use the service.’

The app was launched last November and some 32,000 have already left their previous doctor to sign up to the firm’s practice in West London, so they can access the online service.

GP at Hand’s patients include Health Secretary Matt Hancock, who has described it as ‘revolutionary’ and wants it rolled out across the country.

But last week the head of the Royal College of GPs warned that the service was ‘luring’ doctors and patients away from traditional surgeries, which could force them to close.

Professor Helen Stokes-Lampard also said she was anxious about the safety of virtual appointments, as they have never been properly tested.

On Monday night, Mr Hancock was again criticised by GP leaders for saying the consultations should be rolled out like driverless cars. 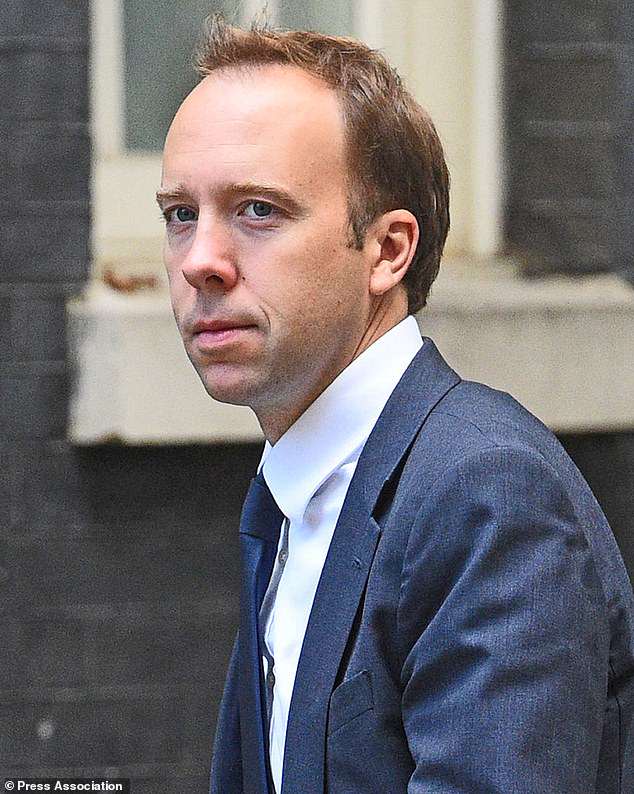 GP at Hand’s patients include Health Secretary Matt Hancock (pictured), who has described it as ‘revolutionary’ and wants it rolled out across the country

Plans to roll out a controversial smartphone app that lets patient speak to their GP were blocked by NHS chiefs  in August, amid fears over patient safety.

Health and Social Care Secretary Matt Hancock has said he wants to see the technology ‘available to all’ on the NHS and ‘not just the select few’ in London.

The app, which works 24 hours a day, seven days a week, claims to reduce pressure on primary care and hospitals.

But attempts by private firm Babylon Health to expand its ‘GP at Hand’ app into Birmingham were thwarted by health chiefs.

NHS England has blocked the move over concerns it could lead to patients missing vital tests, screening appointments or treatment because they will no longer be registered with a local GP.

Speaking at an event at the Tory party conference in Birmingham, hosted by the Royal College of GPs, he suggested that the appointments didn’t need to work perfectly before they were introduced nationwide.

He said: ‘People say, ‘no we’ve got to make sure it works perfectly for everybody before we roll it out’.

‘No we don’t, we have to roll it out for people who can benefit while making sure it is clinically safe. But clinically safe means up to high safety standards.

‘There’s an analogy here with driverless cars. If driverless cars, autonomous cars, can reduce the risk of an accident compared to a human by 90 per cent – but it still hits the headlines when one of those 10 per cent happens – then that’s still an improvement.’

But Professor Stokes-Lampard – who was at the same event – she didn’t want patients ‘crashing’ like driverless cars.

She said: ‘I’m not having patients crashing. The difficulty with the metaphor is that patients and their lives are too precious to play mobile phone upgrades with.’

The Advertising Standards Agency said it had received eight complaints about the GP at Hand adverts, including one from a GP.

One said they had to wait three weeks before they were registered with the app.

A spokesman for Babylon’s GP at Hand said some ‘minor changes’ had been made to the ads to make the sign-up process and eligibility criteria ‘even clearer.’

They added: ‘With over 32,000 people currently registered with GP at Hand and more than four out of five people rating our digital appointments giving them the full five stars, Londoners clearly like our service, because great care only comes when great doctors are supported by great technology.’

WHAT IS GP AT HAND? AND HOW DOES IT WORK?

What it provides: Video appointments with an NHS GP for patients living in one of five London locations.

How it works: Set up by four GP partners and backed by the NHS, this lets you book a free video appointment day or night, with an NHS GP who will discuss symptoms and book a face-to-face appointment if necessary. The doctor can prescribe medication, which you can pick up at a pharmacy.

But controlled drugs such as tramadol and other strong painkillers cannot be prescribed during the digital consultation.

GP at Hand claims it can advise on conditions from lactose intolerance to tonsillitis, urinary tract infections and back pain.

Why it is controversial: GP leaders are concerned about virtual consultations and fear they will miss serious, less obvious symptoms that doctors pick up when they see patients face to face.

And the BMA and the RCGP have accused Babylon – the firm behind GP at Hand – of ‘cherry-picking’ the younger, easy-to-treat patients and leaving surgeries with the older, complex patients.

Surgeries – including the one run by Babylon – are paid an average of £150 by the NHS for every patient on their books, so practices whose patients are moving to Babylon stand to lose substantial amounts of money.