Adventurer, 37, lands his James Bond-style gyrocopter back in UK

Adventurer James Ketchell has landed back in the UK today after becoming the first person to fly solo around the world in an open-cockpit gyrocopter.

The 37-year-old from Basingstoke, Hampshire, set off from Popham airfield on March 31 in the small aircraft which is similar to the one seen in the James Bond movie You Only Live Twice.

His 24,000 nautical mile 175-day journey took him across Europe, Russia, Canada, the US and the Atlantic Ocean heading to Greenland and Iceland, before his final staging post on the Danish Faroe Islands.

The intrepid pilot landed in front of hundreds of wellwishers – including his beaming parents John and Trish Ketchell and nephew Max – in the pouring rain at the same airfield he started his journey. 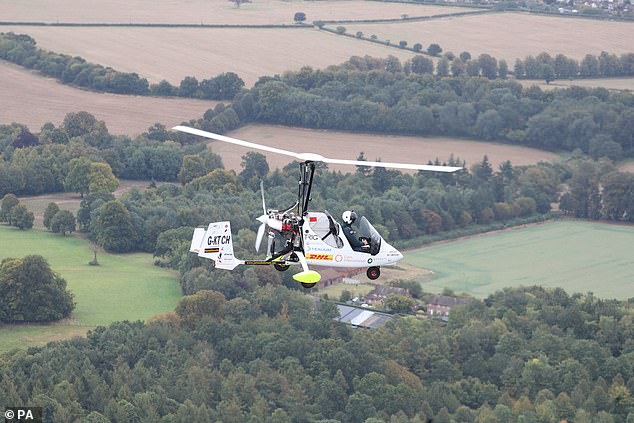 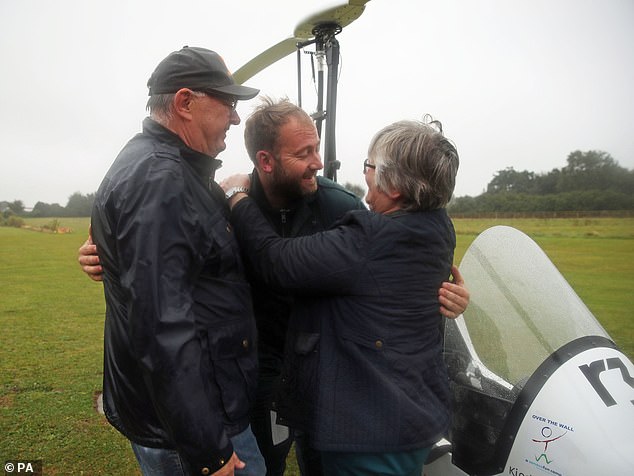 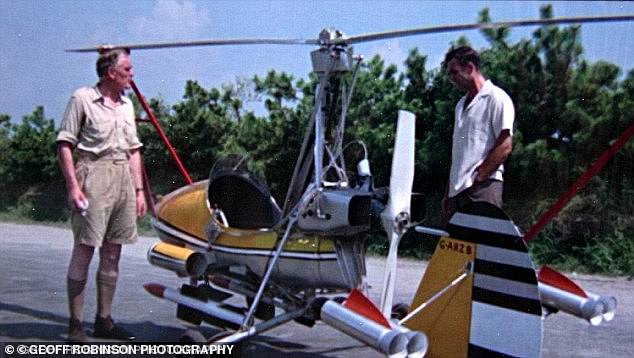 The small aircraft flown by Mr Ketchell is similar to the one seen in the James Bond movie You Only Live Twice, called Little Nellie, and piloted by Sean Connery’s Bond (right) and with a number of weapons modifications by Q (left)

‘I have seen many amazing sights over the last six months. Probably one of the best is flying into Popham.

‘It’s an incredible feeling and I just hope that I manage to achieve my challenge and inspire as many people as I can.’

His Magni M16C gyrocopter travels at 70 knots, with a range of just 700 nautical miles, and its cockpit is open to the weather.

The journey took him all over the world, but in Canada it could have all been in jeopardy.

Mr Ketchell said: ‘I was almost struck by lightning and had to attempt an emergency landing on the road.’

He said that he was glad in a way that it was raining on Sunday when he landed, as it enabled people to understand some of the challenges he faced.

‘It shows people that it’s not that simple, flying around the world.

‘People had a slightly better understanding about what I have been trying to achieve.’ 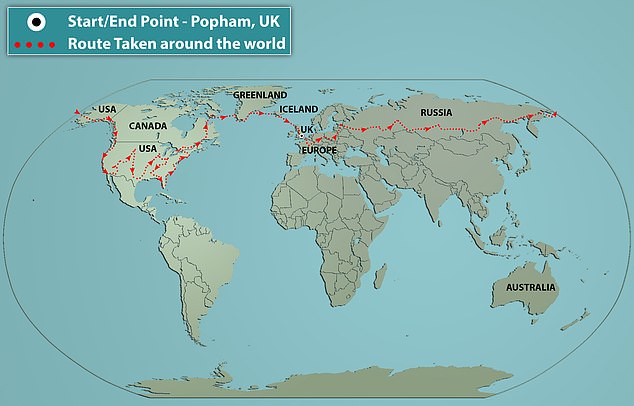 His 24,000 nautical mile 175-day journey took him across Europe, Russia, Canada, the US and the Atlantic Ocean heading to Greenland and Iceland, before his final staging post on the Danish Faroe Islands

Mr Ketchell described the trip ‘as a massive blur’ and seeing the various wildlife was ‘incredible.’

He added: ‘The highlights undoubtedly have been the people I have met, I will be paying forward-favours for the rest of my life and it doesn’t matter what country I was in, what language they speak, people have been so helpful, people have been amazing.’

He added: ‘As soon as you get up in that little gyro and you start flying over remote Russia, Siberia, Greenland, it blows your mind just how big this planet it is and you can feel quite small.

‘The wildlife has been incredible, I have seen massive black bears running around in Siberia, seen whales, you name it.

‘I have been flying 20ft off the ground, it was just incredible and there is no other aircraft that you can do that, it’s magical, you can really immerse yourself in the surroundings, you can smell the water, the seaweed on the beach, if you could bottle that experience you would make a fortune.’

He said the greatest challenge had been the levels of concentration required while flying for many hours.

He said: ‘This project is hugely mental, you can never relax, you are always on edge thinking of the next flight, always looking at the weather. 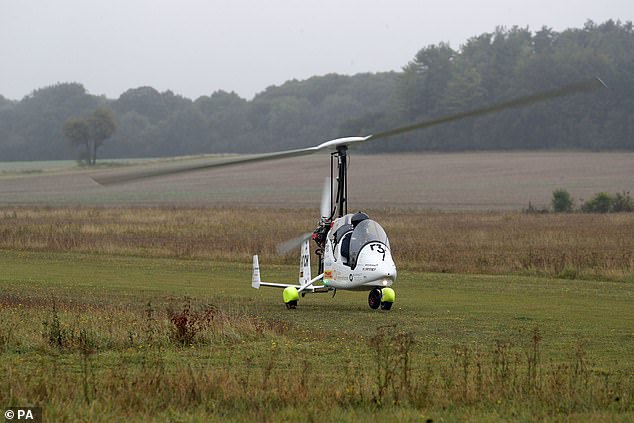 Mr Ketchell comes into land at Popham Airfield, in Hampshire, after circumnavigating the globe

‘What people don’t realise is that the levels of concentration are really high when you are flying, it’s a like flying a motorbike in the sky, you are fully exposed to the weather because it has no cockpit, it’s mentally draining, it’s a cumulative build-up of fatigue, in that sense this is the hardest thing I have undertaken.’

The circumnavigation follows his previous ‘ultimate global triathlon’ which saw him row across the Atlantic Ocean in 2010, climb Everest in 2011 and cycle 28,969 km around the world in 2013.

During the trip, Mr Ketchell, a UK Scouting ambassador, set himself the goal to speak at a school in every country he visited to help motivate youngsters.

Describing visits to schools in Siberia, he said: ‘The look on these kids’ faces, big eyes staring at me with their mouths open while I was telling these stories as they were being translated was a really magical feeling and all the stresses drifted away, this is what this is all about.’

Mr Ketchell described how he spent his teenage years depressed and lacking in confidence, and how a serious motorcycle accident led him to turn his life around.

He said: ‘With the birth of social media, teenagers now are frightened to do anything in case they get hung, drawn and quartered because they are worried about their image, I try to get my message out that ‘Don’t worry about anyone else and get out there and do your thing and your life will become free’.’

His challenge is raising funds for the Kindled Spirit and Over The Wall children’s charities and donations can be made at: http://bit.ly/JamesKetchelldonate