Aer Lingus passengers required oxygen as they fainted and cried when Storm Brendan forced a pilot to abort landing.

The flight from Amsterdam to Cork had to circle over Ireland’s south-western city for an hour.

Terrified flyers were caught in the storm at the height of orange weather warnings on Monday, CorkBeo reports. 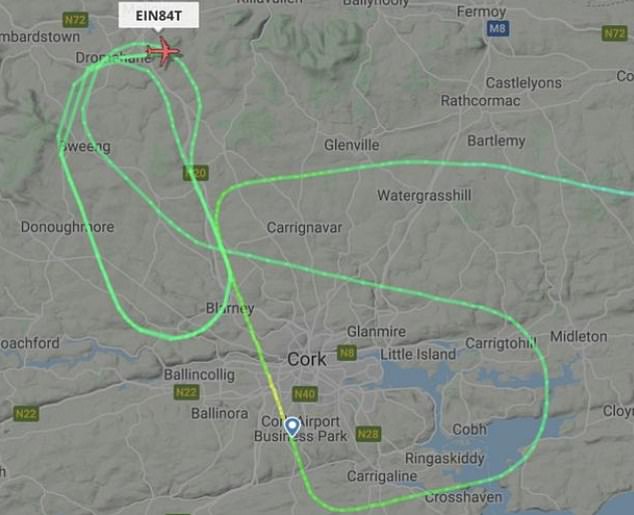 Pictured: The altered route as the pilot was forced to circle above Cork airport amid the stormy conditions on Monday

It comes as 70mph winds are battering Britain as the storm sweeps across the UK and Ireland.

One social media user shared a picture of the plane’s flight pattern on Twitter, showing it circling the airport.

It was caught in a holding pattern as passengers grew nervous amid the turbulent conditions.

It came after the pilot’s initial attempt at landing was called off and traveller Elizabeth Meehan reported that passengers were weeping as it was aborted.

The 20-year-old said: ‘I was sitting with my friends in the last row. Three of my friends are nervous flyers and were crying after we failed to land.’

She praised the pilot for keeping everyone safe despite the stormy weather outside the plane.

Twitter user Mark Foley shared a flight map online showing the plane’s situation, writing: ‘Things are not getting any better for the @AerLingus Amsterdam-Cork flight.’

The pilot managed to land on a second attempt, but one passenger said more than 20 people were unwell and referred to the journey’s end as ‘scary’.

Christiaan Beek said on Twitter: ‘Big shoutout to the pilots from @AerLingus who landed the plane in the middle of this storm at Cork, after breaking off the first approach last minute!’