New aerial photos show just how badly California was hit by its worst-ever wildfires this month, as those on the ground face up to the possibility that their homes may never be rebuilt.

The inferno, which began on October 8, saw 100,000 people evacuating, 42 dead, and 8,900 structures damaged or destroyed – with the city of Santa Rosa losing five percent of its housing.

‘We don’t control these things, and it makes you realize how small you are in the world when something like this happens,’ Sheriff Rob Giordano said at a memorial service on Saturday.

‘I don’t think we understand the level at which it is going to impact lives, and the community will be different.’

These shocking images show the devastation wrought on California after this month’s wildfires, which are the worst the state has ever seen. The city of Santa Rosa (pictured) was particularly hard-hit, losing five percent of its housing 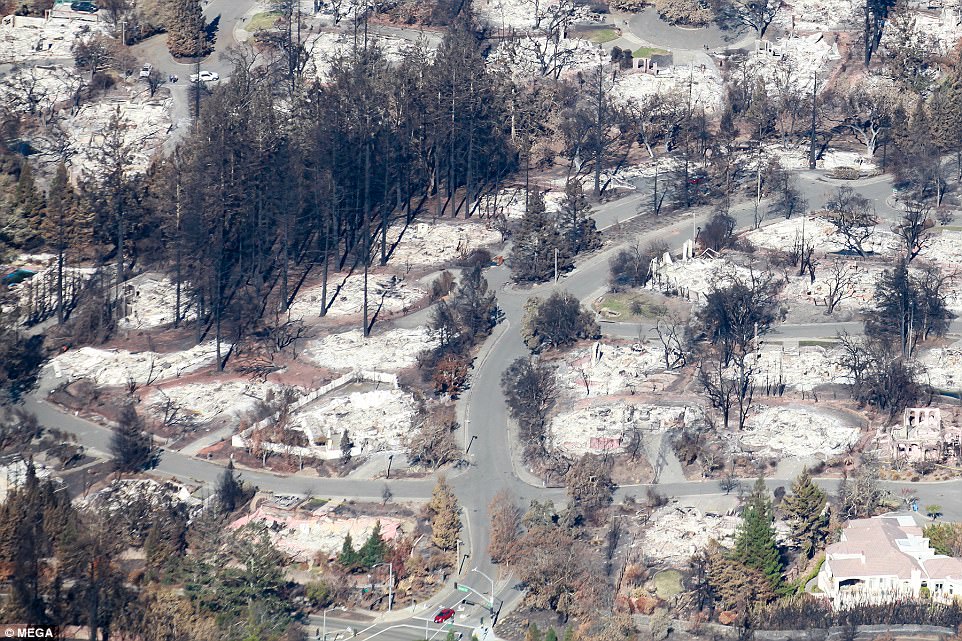 The fire – named the Tubbs Fire because it started on Tubbs Lane in Santa Rosa (pictured: several of the city’s roads) – began on October 8 and went on to kill 42 people and destroy more than 8,900 buildings. 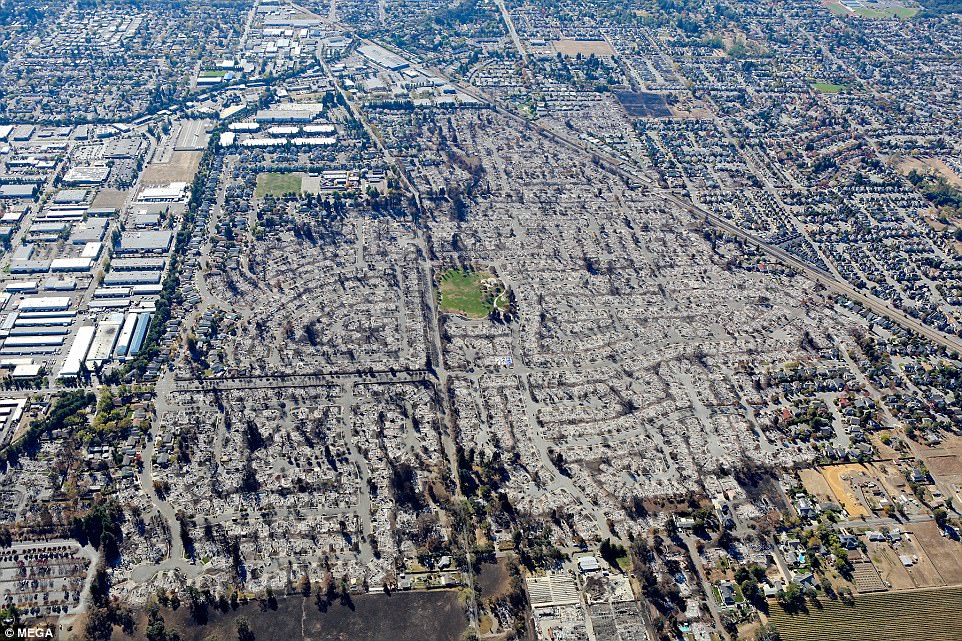 In total, around 100,000 people were evacuated to avoid the blaze, but the damage will likely take years to recover from. Santa Rosa already struggled with a lack of housing before the fires 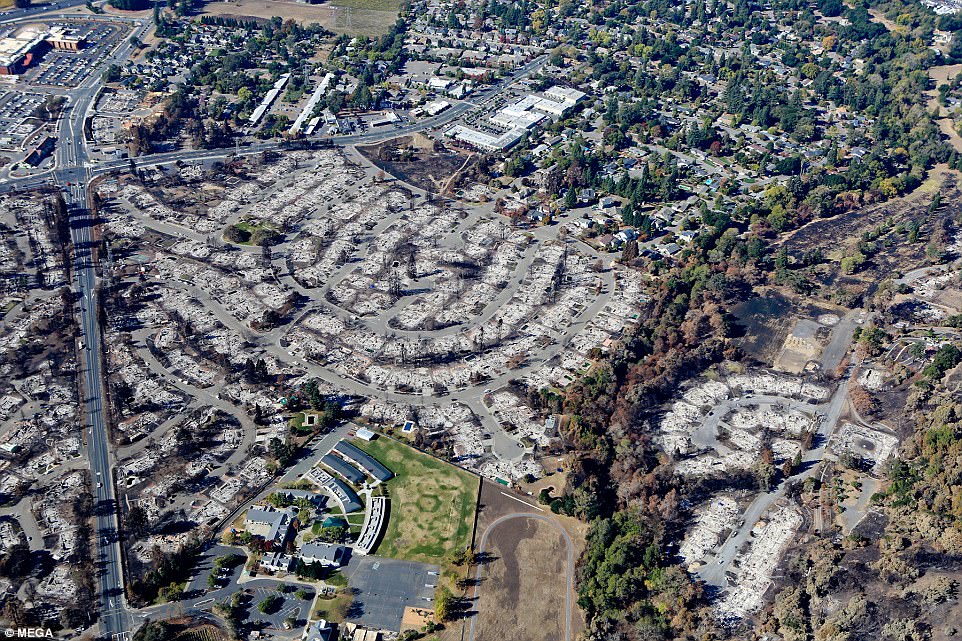 The cleanup of debris alone in Santa Rosa is expected to run into early 2018, and the losses are estimated to be as high as $1 billion. FEMA has given out $6 million worth of rental and other assistance to displaced Californians

For Santa Rosa, it’s made an existing problem – a lack of housing – even worse. But many residents are vowing to rebuild their homes and city.

‘There is a sense of community we are all going to rebuild,’ Dee Dee Bridges, 70, who lost her 3,300-square-foot home, told the LA Times. ‘We aren’t going anywhere… I want to rebuild fast. I haven’t got time to wait.’

Others are concerned about whether everyone will be able to go the distance.

‘The first reaction of anyone in a situation like this is, “I am going to stay… and stand my ground,”‘ Mayor Chris Coursey said. ‘As that gets harder for some people, I hope that they will still show that resolve. It’s hard – I still have a house – for me to tell people what to do. But I really want people to stay in this community.’

Residents must worry not just about rebuilding their own homes, but also finding somewhere to live while that happens.

There are also concerns that the Army corps of engineers may remove workable foundations when clearing up the remains of streets and neighborhoods, unnecessarily adding to the cost of rebuilding.

The EPA has assessed 740 properties so far, while FEMA has given out $6 million worth of rental and other assistance to displaced Californians, officials said.

Officials estimate the cleanup of debris and other hazardous materials will last into early 2018. The losses are estimated to be at more than $1 billion. 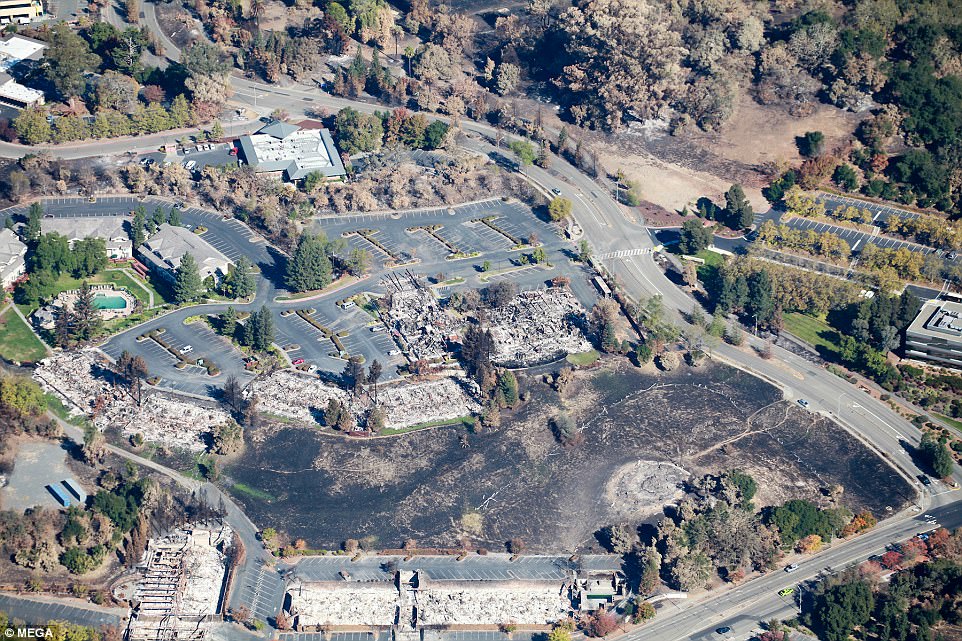 Many Santa Rosa residents are now looking to rebuild their homes and communities, although some are worried that the army engineers sent in to clear up debris will tear up workable foundations, increasing rebuilding costs 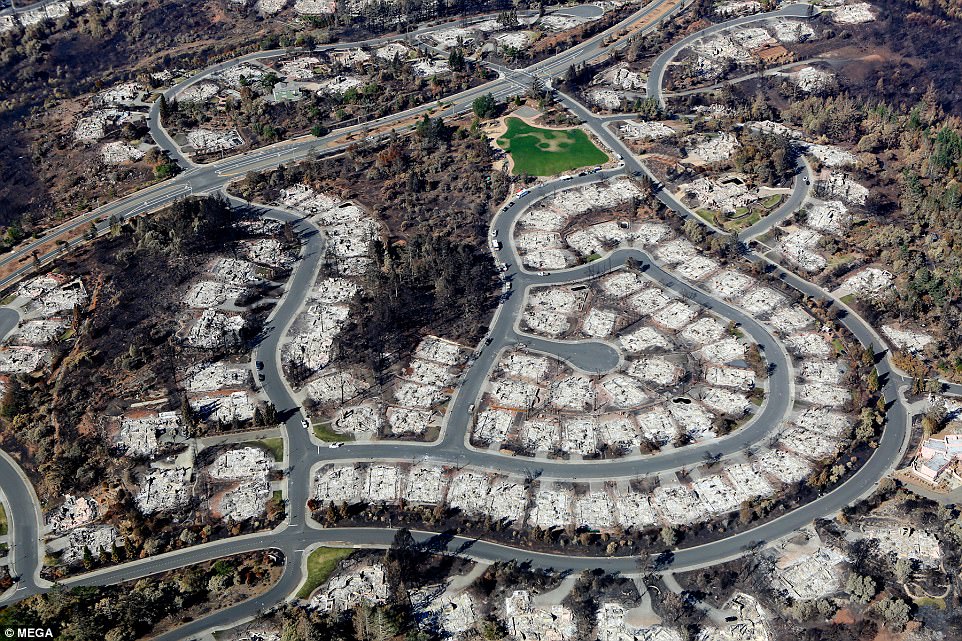 While the resolve to reclaim their lives is strong among many Santa Rosa residents, the struggle to find places to live is a major problem, as is affording the cost of rebuilding a home 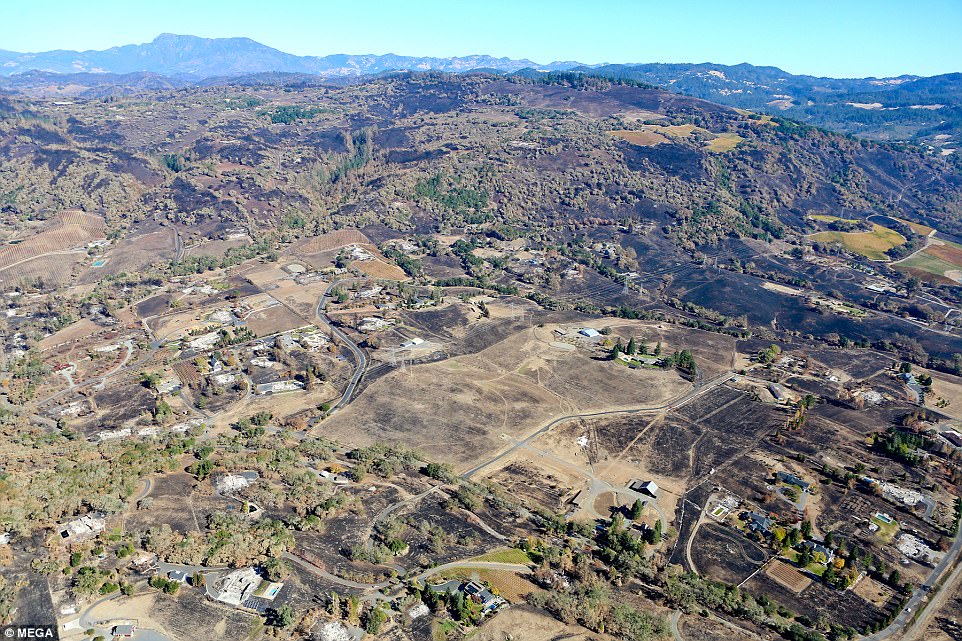 The scale of the fire can be seen in this photograph, with swathes of buildings and fields blackened and burned. The Tubbs fire burned at least 36,807 acres of land 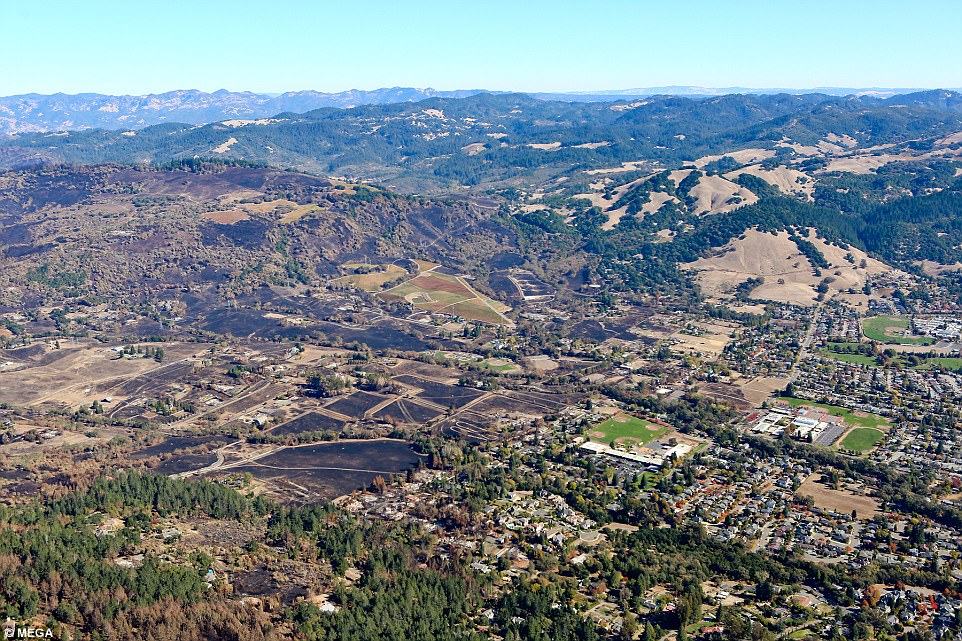 The contrast between the area affected by the fire (left) and the area spared from its destruction (right) is marked. The Tubbs Fire followed a similar route to the 1964 Hanley Fire 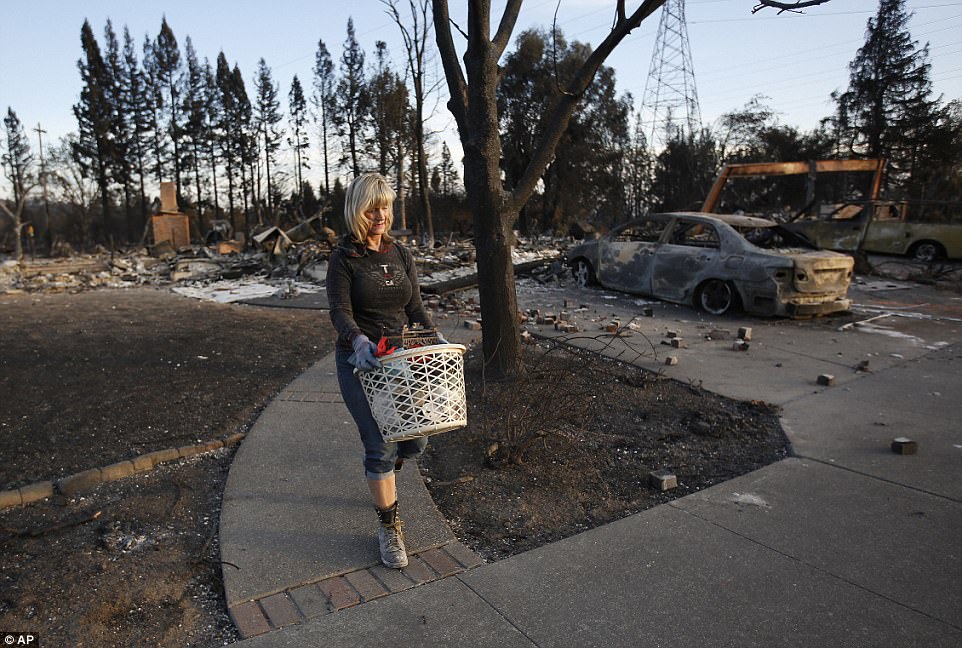 Santa Rosa resident Debbie Wolfe carries a few surviving items from the remains of her home in Santa Rosa on October 17. Nancy Pelosi and five other members of Congress toured the area on Saturday

On Saturday a memorial was held at a college in Santa Rosa to honor the lives lost in the fires, with a bell ringing 42 times to commemorate the dead.

Sheriff Rob Giordano and other officials praised the ordinary and extraordinary acts of heroism by first responders and community members as the firefight raged on for more than a week.

Some firefighters worked days on the front line, refusing to take breaks, while sheriff’s dispatchers continued taking calls even as the fire came close to taking out their building.

US House Minority Leader Nancy Pelosi and five members of Congress spent Saturday attending the memorial, touring the fire ravaged areas and gathering advice from federal, state and local officials on what Congress can do to aid the recovery efforts.

In a briefing in Santa Rosa, officials asked them to ease red tape that will make it easier to erect temporary housing and to ensure the Environmental Protection Agency has the resources it needs to clean up any hazardous material before it infiltrates the water supply.

‘It was just unfathomable the amount of destruction that we saw,’ Pelosi said. ‘My colleagues will have to understand this is different from anything else, many times over.’

But Pelosi said Northern California’s response to the fires can serve as a national model for disaster response if done right.

She urged her colleagues in Congress to think beyond the incremental rebuilding needs and help the region better prepare for and mitigate damage from future disasters.

‘What would we like to see the result be? Let’s engineer it back from there,’ she said of the rebuilding efforts.

Thompson and other members of Congress, meanwhile, were asked to look at ensuring immigrants living in the country illegally are not at risk if they contact the Federal Emergency Management Agency.

They were also asked to look into improving the system for alerting people of pending disasters, a more difficult task now that more homes rely on cellphones instead of landlines. 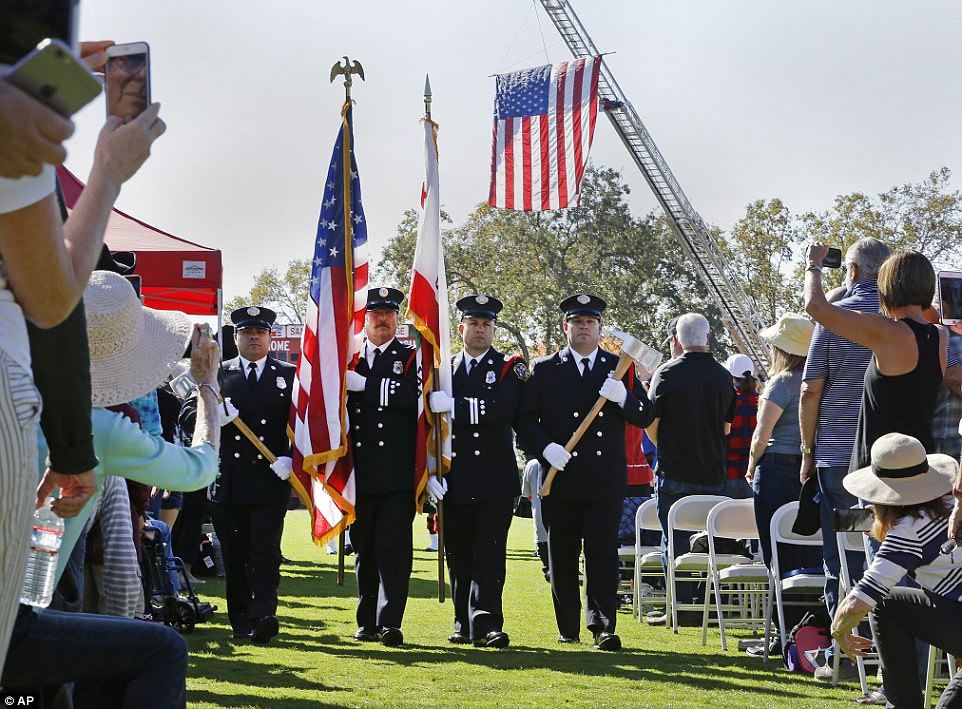 Also on Saturday, Pelosi and the other members of Congress attended this memorial ceremony for those killed in the raging fires. Pictured is a color guard of Santa Rosa firefighters 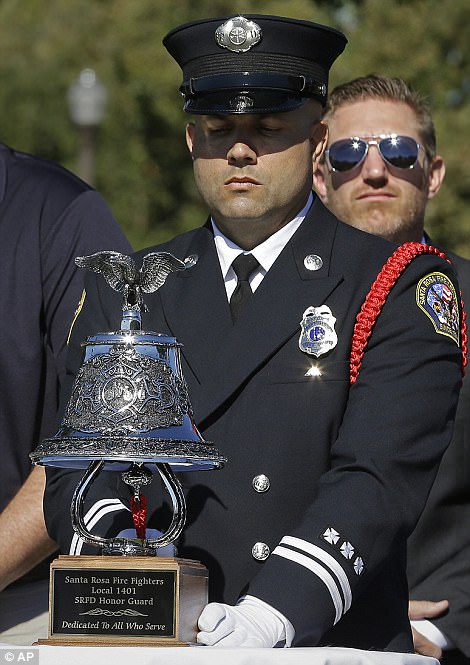 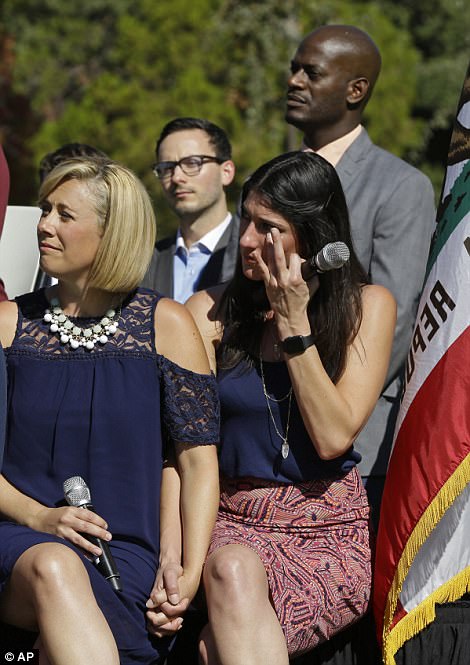 A Santa Rosa fireman (left) rang a bell 42 times to symbolize the lives lost to the blaze. Many there, such as the choir singer seen right, were visibly moved by the event 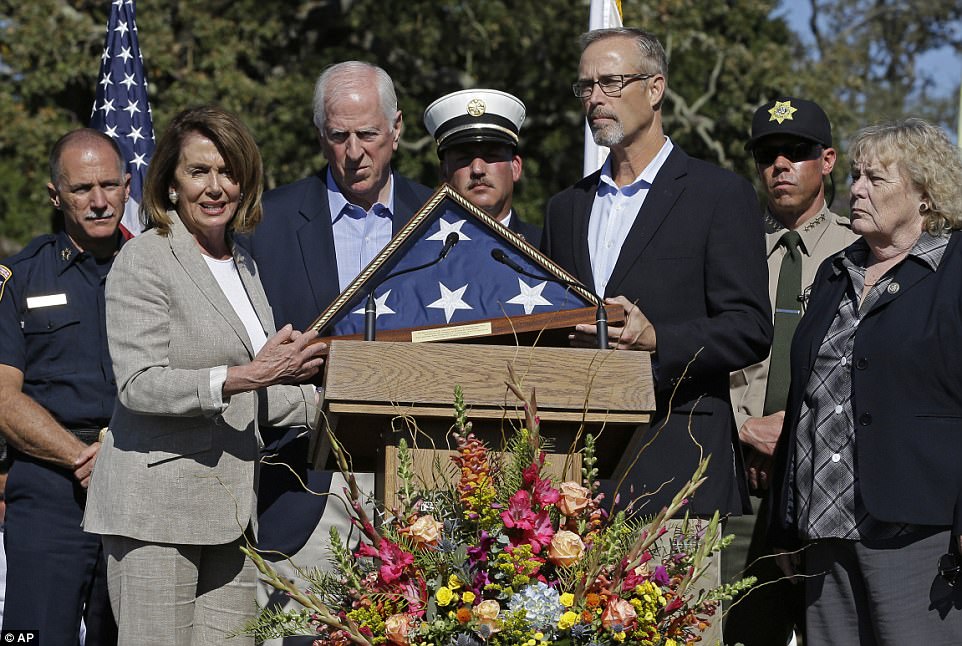