Afghan girl, 15, hailed a hero for killing Taliban fighters ‘shot her own HUSBAND’

A teenage girl hailed a hero for gunning down two Taliban extremists who shot her parents dead in Afghanistan ‘killed her own husband’ when she opened fire, according to fresh reports.

Qamar Gul, 15, was married to one of the attackers she opened fire on after he tried to seize her back in a family feud, relatives and local officials told the NY Times.

Arif Aber, spokesman for the governor of Ghor province where the incident took place, said yesterday the teenager and her younger brother, 12-year-old Habibullah, are modern-day champions in the fight against the Taliban.

Insurgents stormed the home of Gul last week looking for her father, the village chief, before shooting both of her parents.

Qamar Gul, pictured brandishing an AK-47, was hailed a hero for gunning down two Taliban extremists who shot her parents dead in Afghanistan, with fresh reports now claiming one of the attackers she killed was her own husband

Some reports initially said the Taliban came to extort ‘taxes’ from the villagers, while others simply claimed the attack was due to the parents’ support of the government.

Gul then emerged from the house with her family’s AK-47 and opened fire, killing the two Taliban fighters who gunned down her mother and father and injuring several others.

The girl and her brother are being brought to the Afghan capital Kabul to meet President Ashraf Ghani as a result of their bravery.

Gul regrets she was unable to say goodbye to her mother and father.

‘After I killed the two Taliban, I went to talk to my parents, but they were not breathing,’ she said. ‘I feel sad, I could not talk to them one last time.’

The NY Times describes the Ghor Province as being a ‘particularly brutal’ area for women, where girls are bartered at a young age and graphic videos of stoning and flogging regularly come out of Taliban-controlled areas.

The site adds that the family has endured violence long before last week’s raid. 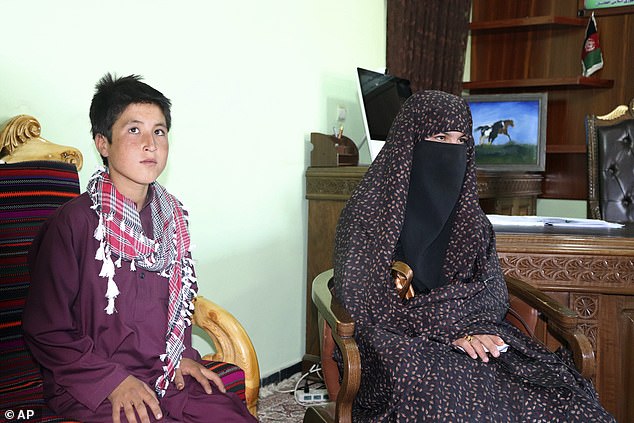 Qamar Gul and her younger brother Habibullah, 12, pictured in the governor’s office in Feroz Koh, the provincial capital of Ghor province, on Tuesday, are being hailed as heroes after fighting off Taliban militants who killed their parents 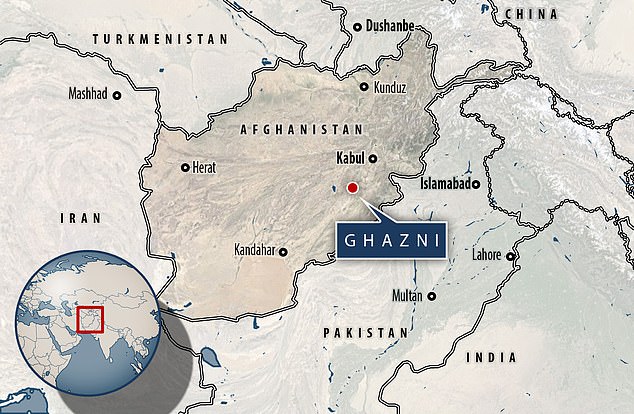 Gul’s mother, Fatima, has married twice before tying the knot with her father, Shah Gul Rahimi, with her first husband dying of an overdose and her second, Rahimi’s older brother, killed in clashes with the Taliban in the 1990s.

The father, described as a stalwart fighter, despite losing a hand many years ago, regularly helped the local uprising militia fend off Taliban attacks, though it wasn’t clear whether he was also on a government payroll.

In 2016, he arranged for Mohamed Naeem, a man from an adjacent village, to marry his daughter, while he would take Naeem’s teenage niece as his second wife.

‘Naeem was his son-in-law, and they got along very well too,’ said Rahimi’s nephew, Sebghatullah. ‘It all turned upside down at once.’

It is unclear how Naeem then ended up joining the Taliban but relatives and local officials said his private life had fallen apart and he was being chased for debts over the last two years.

He fell out with his parents over treatment of his first wife, having spent all his time with Gul, and after one argument he took his new bridge and left, staying first with his in-laws and then to Helmand Province, a Taliban stronghold.

Trouble then began when Gul’s father’s new wife visited her family and refused to return to her husband, at which point Rahimi held his daughter until Naeem agreed paid the debts he was being harassed over.

Family relative Zabihullah Rahmani told the NY Times: ‘Naeem’s niece wasn’t happy with the marriage because Shah Gul was much older than her. But Qamar Gul wasn’t arguing much — she said she was OK with whatever her father had decided, but that Naeem had to pay back the debt.’

However, Naeem had grown close to a ruthless Taliban commander who helped him raid the family home without paying any money and so around a dozen fighters barged into the hillside home just after midnight on July 17.

Gul’s father tried to run for his weapon when he saw what was happening but was shot six times, including once in the neck, while the mother was shot three times, twice in the chest and once in the neck.

It was at that point 15-year-old Gul grabbed her father’s gun, ran to the doorway, and opened fire on the attackers, shooting two dead and wounding the senior commander.

Hundreds of people on social media have since demanding the government protect the teenager, with some calling for her to be sent outside of Afghanistan.

‘I demand that the president help transfer her to a safe place as her and her family’s security is at risk,’ prominent women’s rights activist and former lawmaker Fawzia Koofi wrote on Facebook.

Munera Yousufzada, a defence ministry official, said Gul’s ‘brave act’ was a message to the Taliban from Afghan women.

‘The Taliban must realise and know that today’s women are different than the women during their rule,’ she said on Twitter.

‘If you really want to protect her, then send her abroad. If she comes to Kabul for even two days… she will be killed,’ Zoya Amini, a resident of Kabul, wrote on Facebook.

A Taliban spokesman has confirmed an operation took place in the area of the attack, but denied any of the group’s fighters had been killed by a woman.