The AFL has given itself a dilemma after Brad Crouch seemingly landed himself in hot water for a big bump on Darcy Gardner in the wake of the Patrick Cripps decision.

St Kilda star Crouch made high contact with Gardner’s head during the clash at Marvel Stadium on Friday night, leaving the Lions gun in a heap on the turf.

The incident would appear a textbook slam dunk case for the match review panel, but the tribunal’s decision to overturn a two-match ban against Carlton skipper Cripps has thrown the case wide open. 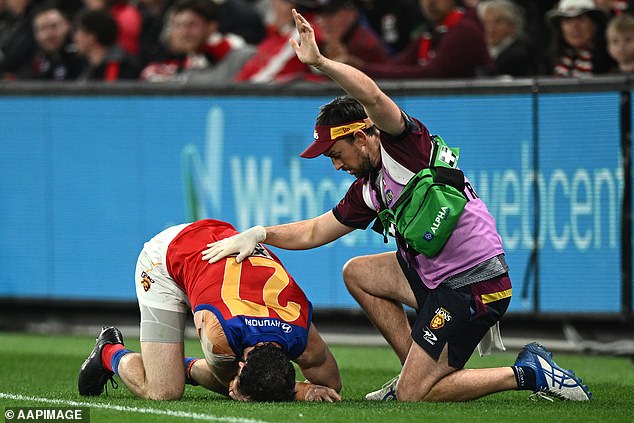 Cripps was surprisingly declared free to play despite inciting a heavy collision with Callum Ah Chee on Sunday, leading to widespread backlash from footy fans.

And supporters have taken to Twitter to take aim at the AFL, claiming that Crouch should not have a case to answer after the Cripps controversy.

Another said: ‘Play on. Precedence has been set.’ While a third joked: ‘Put a blues jumper on, nothing to see here.’

A fourth fan advised St Kilda: ‘Appeal it twice get some good lawyers and should be fine.’