You’d think some of the AFL’s most prestigious players would be given the royal treatment at the Grand Final Parade.

But as thousands of fans gather on the streets of Melbourne each year ahead of the decider, their football heroes are perched on fold-out wooden chairs.

The long-standing tradition of AFL stars sitting on the back seat of luxury convertibles seemingly went out the window in 2005 when the light-weight chairs were introduced for the Sydney Swans-West Coast Eagles Grand Final.

Every parade since, players have been seated in the back of utility trucks on the timber framed chairs – with the exception of 2009 and 2012 – when rain forced them to stay inside their vehicles. 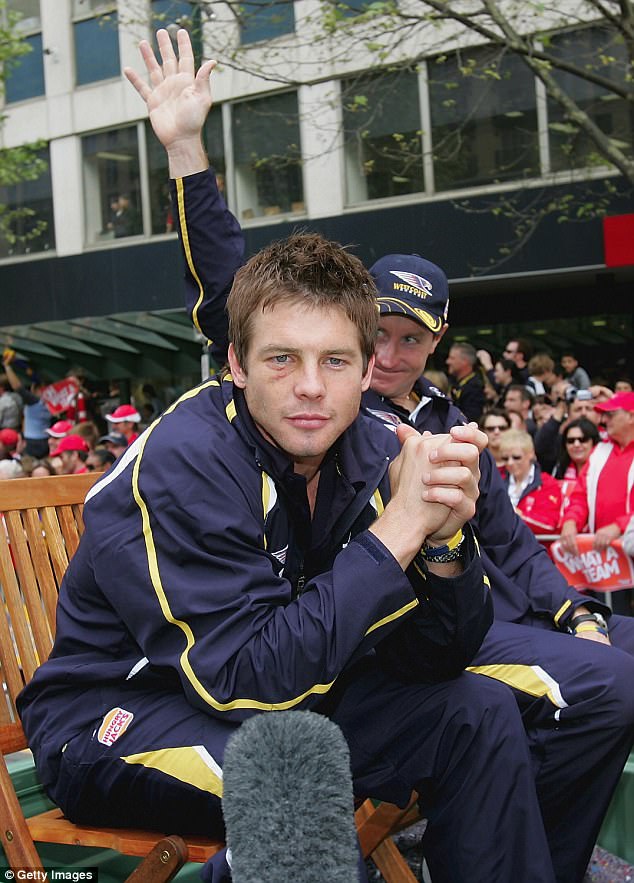 Fallen star Ben Cousins, who is now in jail, is pictured at the 2005 AFL Grand Final Parade 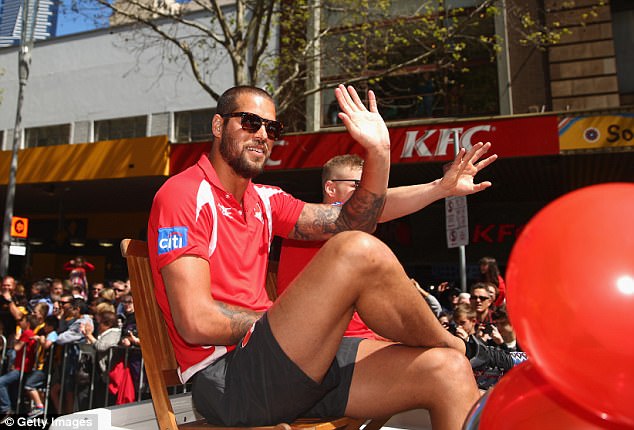 The notoriously shy midfielder waved and gave thumbs-up signs to his legion of adoring fans.

‘I’m a third-generation Richmond fan and it’s just amazing to see them here,’ she said, adding that the Tigers’ grand final berth is particularly special. 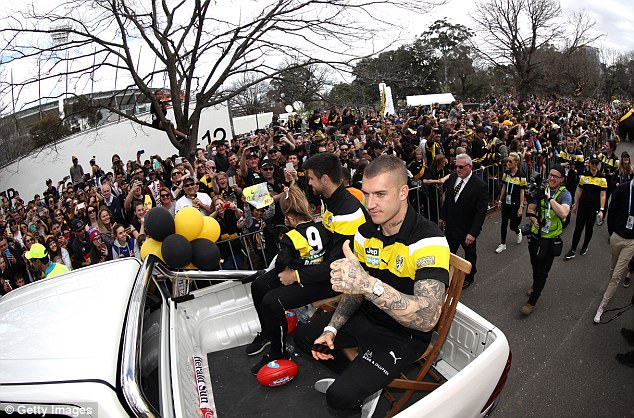 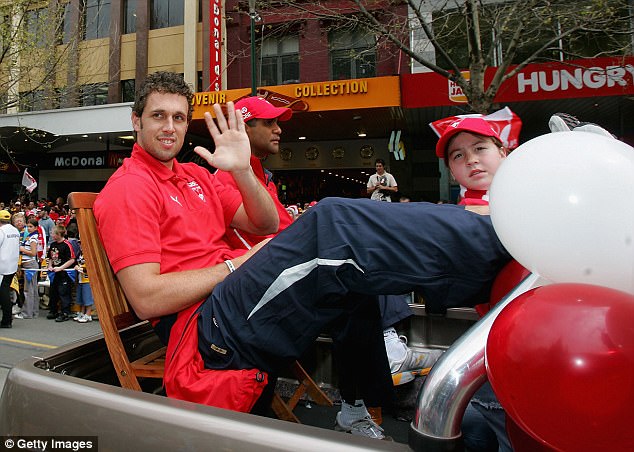 The long-standing tradition of AFL stars sitting on the back seat of luxury convertibles seemingly went out the window in 2005 when the light-weight chairs were introduced for the Sydney Swans-West Coast Eagles Grand Final. Nick Davis is pictured waving  to the crowd 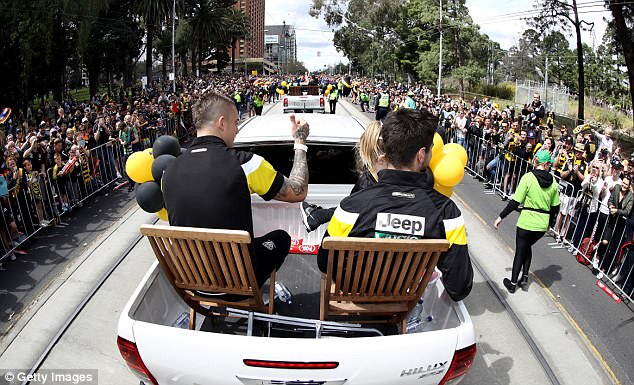 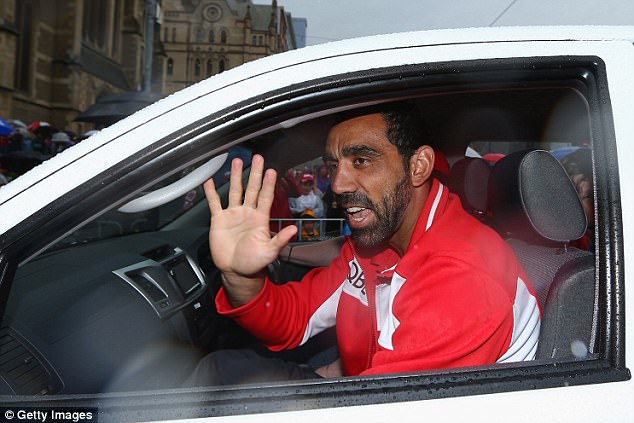 ‘My dad passed away five years ago and he was the biggest fan so this means a lot to us. He’d be beside himself if he was here,’ she said in tears.

Her family is planning a big party on Saturday and were hoping for a big win.

‘Everyone loves the underdog and we are feeling like it’s our year,’ Ms Baird said.

Richmond supporter Simon Keeble is having the best week of his life.

Sure, the birth of his children and his wedding day were important too, but having his beloved Tigers reach the 2017 AFL grand final after a 37-year premiership drought is a milestone.

‘I did say to my wife ‘if we made the grand final, it would be the best week of my life,’ he said on Friday.

He was one of thousands of fans to crowd Melbourne’s CBD for the annual grand final parade, showing their allegiance by proudly wearing black and gold or the tri-colours of the Adelaide Crows.

‘Adelaide have been the best team this year but there is something intangible happening with the Tigers,’ Mr Keeble said. 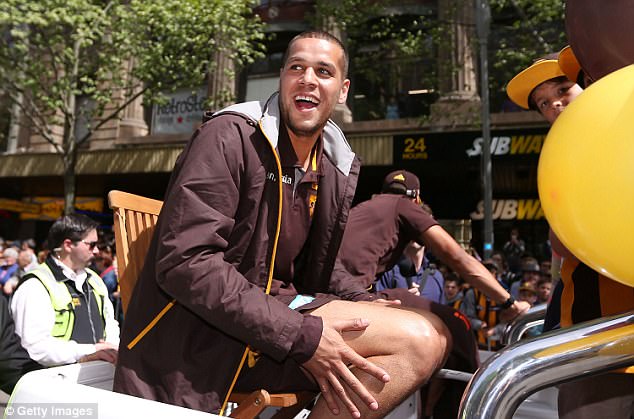 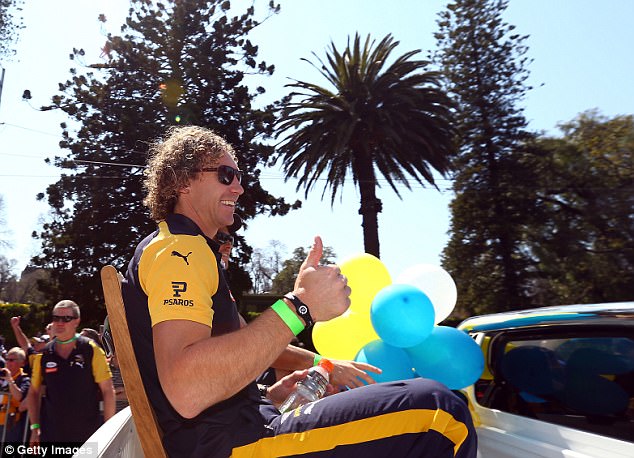 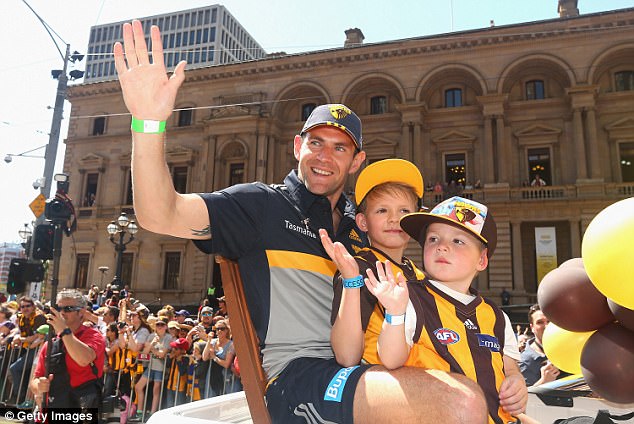 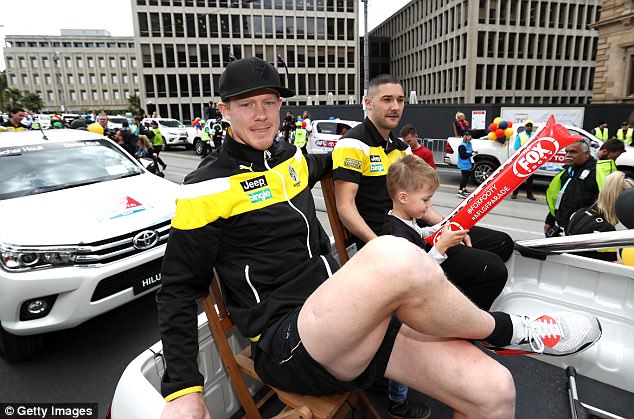 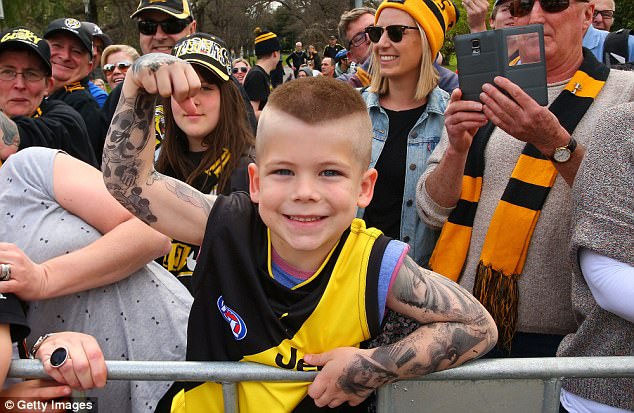 The parade started near Parliament House at midday.

It’s the third year a public holiday has been held on grand final eve after the Labor government introduced it in 2015.

The parade, which has been part of the game since 1977, ends near the MCG, where the Adelaide and Richmond teams will be presented on stage and the captains will raise the premiership cup.

Earlier, security was forced to close the gates at Punt Road Oval as a sea of yellow-and-black clad fans watched the Tigers’ last training session before the decider.

The players started training at 9.45am and just 45 minutes later, the gates were already being locked at the club’s spiritual home. 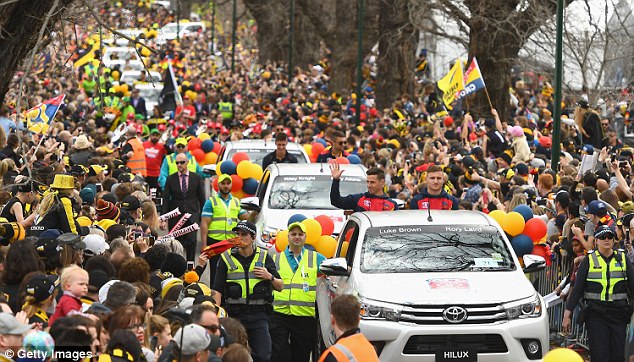 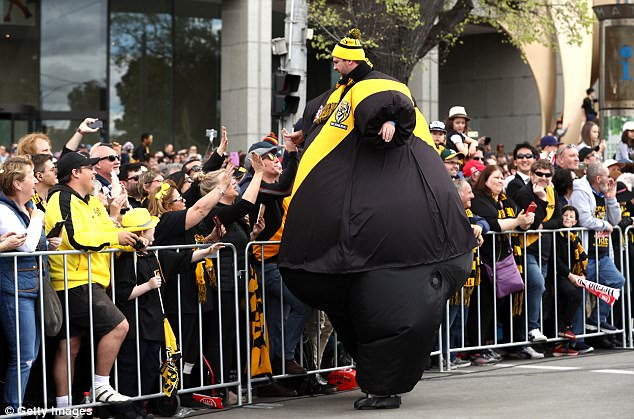 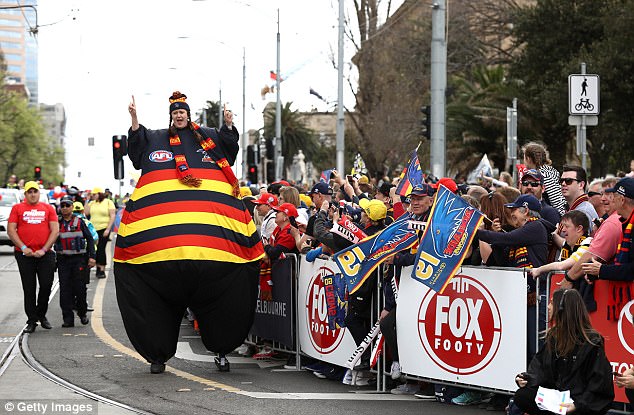 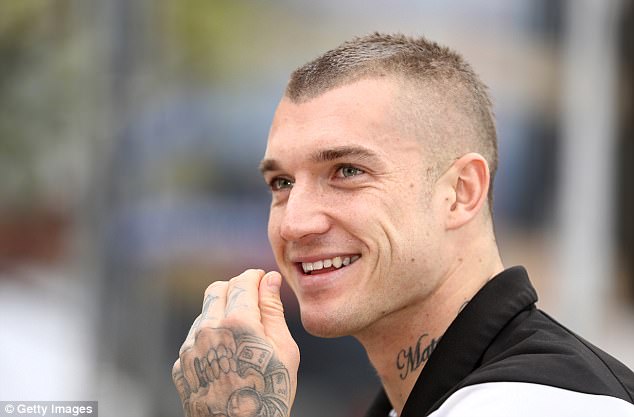 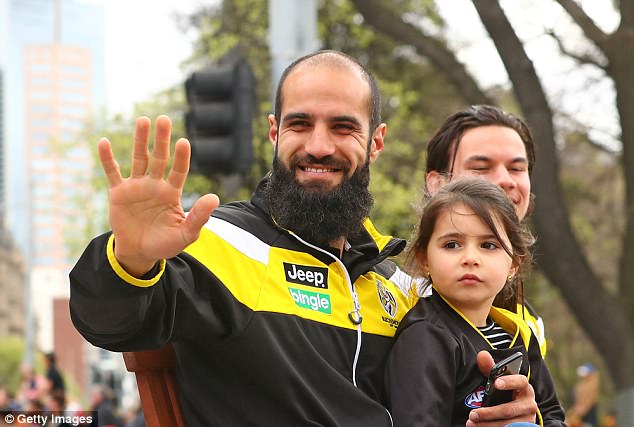 Fans cheered with a sort of glee that, for many in the crowd, had been a foreign feeling up until this grand-final week, as they belted out the club song with gusto.

The locked-out masses spilled into Yarra Park, sneaking a glimpse from behind the fence while peering over Portaloos.

Richmond’s last grand final appearance was back in 1982 and their last premiership was in 1980.

They will go in as underdogs when they face the Adelaide Crows at the Melbourne Cricket Ground on Saturday afternoon. 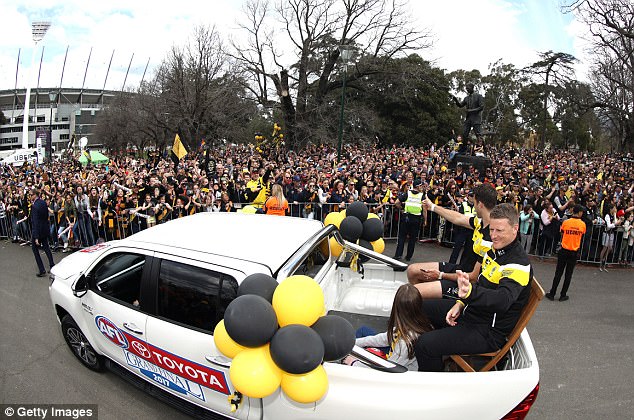 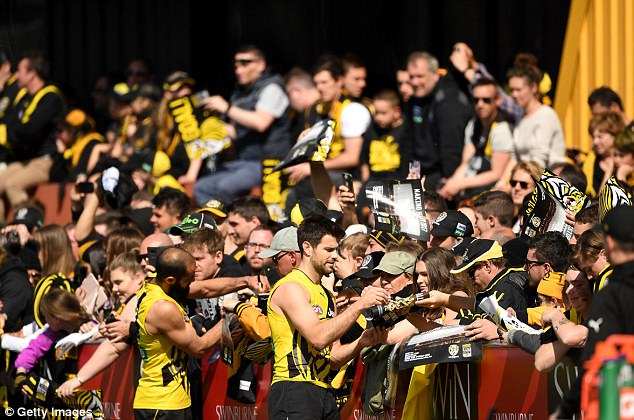 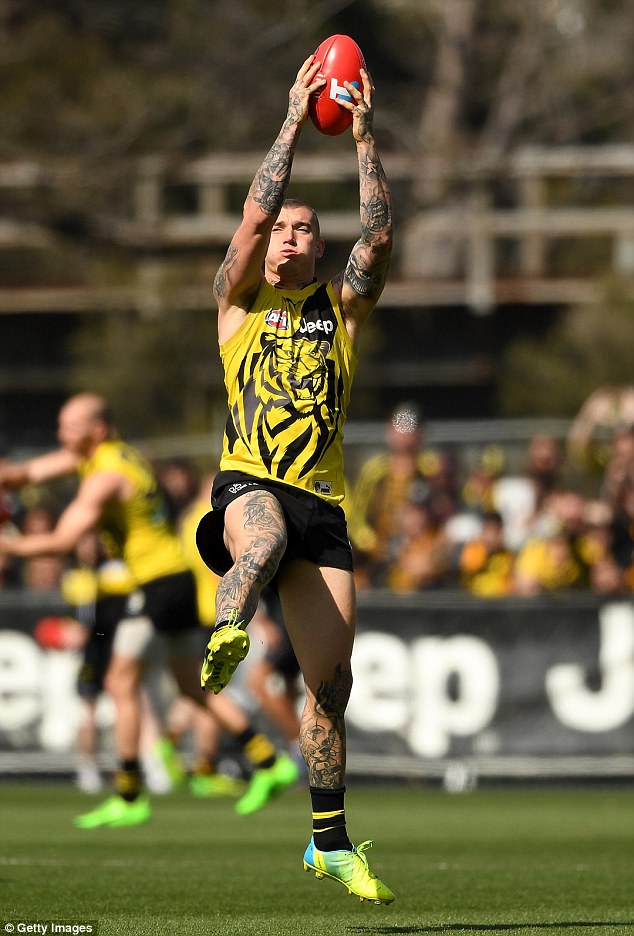 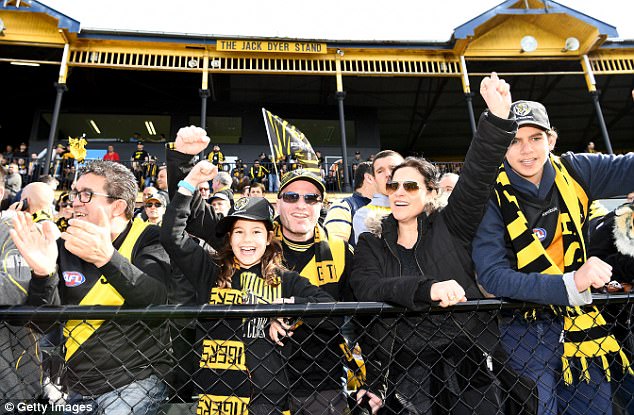 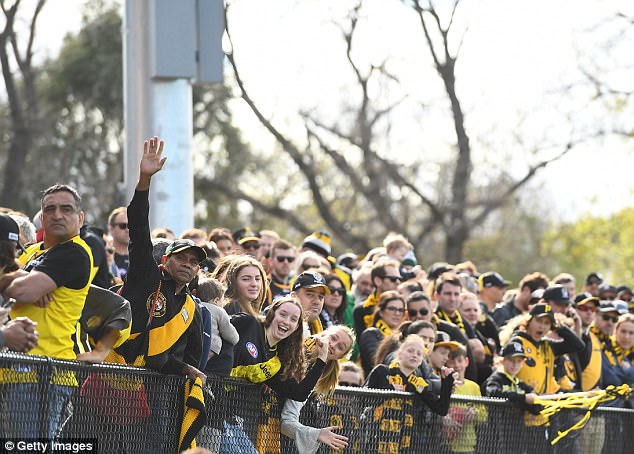 Players started training at 9.45am and just 45 minutes later, the gates were already being locked at the club’s spiritual home