Dodgy scalpers are cashing in on the desperation of diehard footy fans, taking offers of up to $10,000 to see their team play in the AFL grand final.

With thousands of Richmond fans desperate to watch their team attempt to break a 37-year-old premiership drought, tickets are being sought after like never before.

And a quick search of sites such as Ebay and Gumtree reveals scalpers are rubbing their hands in glee at fans’ desperation, being able to choose from offers as much as five figures.

Dodgy ticket scalpers are cashing in on the desperation of die hard footy fans to see their team in the AFL grand final, taking offers of up to $10,000 for tickets (pictured) to the big match

Tickets to the big match are selling for as much as $10,000, while the NRL has been forced to give tickets away for free because of poor sales to its Grand Final

Scalpers standing outside the MCG on the morning of the grand final has long been a tradition, as desperate fans subtly attempt to secure a last minute ticket.

Tickets to the Grand Final often range in price from $150 for standing room up to as much as $410 for premium seating, while corporate packages sell for up to $1,500.

But in recent years, with the rise of the internet, the already expensive tickets often appear online at ridiculously inflated prices within minutes of being released.

On EBay, single tickets are on offer for everywhere from $350 and multiples for close to $2,500, while desperate fans advertise that they’re willing to pay up to $10,000.

This week it was also revealed Adelaide Crows players not playing in this weekend’s decider have been flogging their spare tickets on the black market for up to $2,500.

Legendary players and Hall of Fame inductees are given two tickets each, while AFL members receive close to 23,000.

But in a statement issued this week the AFL defended its ticketing policy, claiming it had even increased the number of tickets given to participating clubs this year. 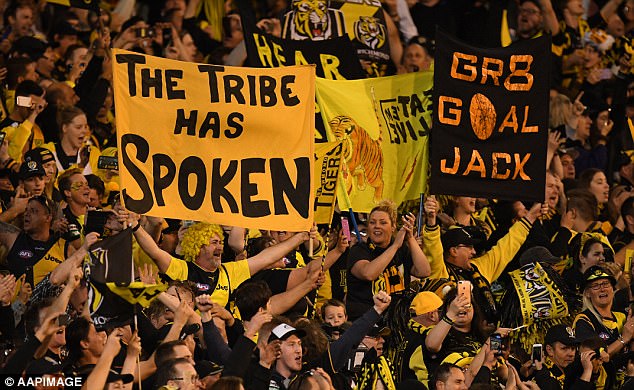 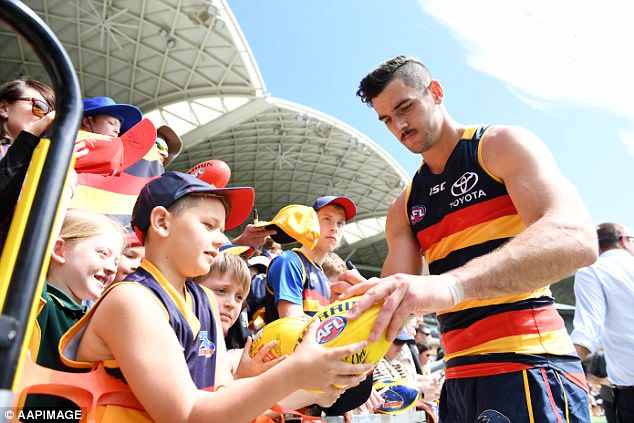 It was also alleged players not playing in this weekend’s decider have been flogging their spare tickets on the black market for up to $2,500 (Pictured is Adelaide captain Taylor Walker)

‘(It) is designed to recognise as best possible the contribution that all groups make to the overall success and strength of the game,’ league spokesperson Patrick Keane said.

‘We are not capable of meeting the demand for entry for the showpiece match.’

In contrast, the NRL has reportedly offered free tickets to junior rugby league players across NSW to avoid an embarrassing turnout for its grand final which is on Sunday.

While some within the industry claimed as many as 20,000 tickets were being given away, the NRL claimed on Wednesday that number was closer to just 6,000.