AFL: Horror for Brodie Smith as Adelaide Crows star knocks HIMSELF out

The Adelaide Oval took a deep, nervous breath after Brodie Smith knocked himself out while taking a brave mark against the GWS Giants.

Despite being well behind on the scoreboard, stand-in captain Smith sought to set an example to his team-mates after flying into an aerial contest on the wing midway through the third term.

He leapt and took a huge grab but – keeping both hands on the ball – did not brace for contact with the ground and landed head-first on the turf, knocking himself out immediately. 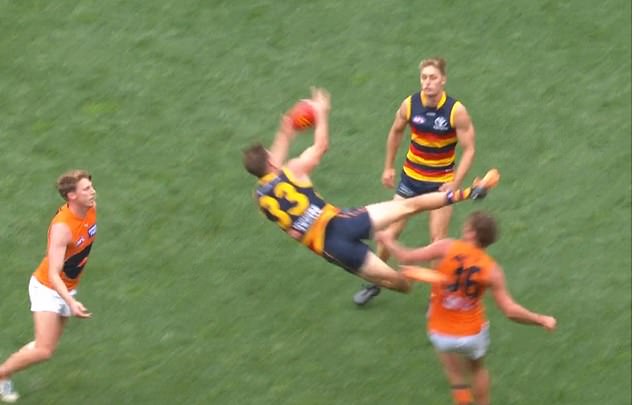 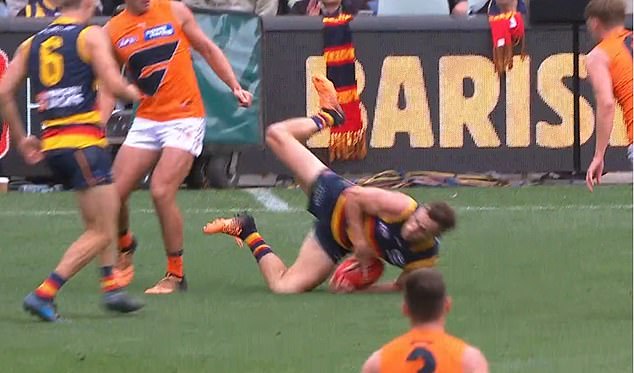 However, he hit the turf head-on and knocked himself out – and was stretched off the pitch

Smith was speedily attended to and stretchered off the pitch, with the crowd lauding their star man and wishing him well. He was replaced by medical sub Harry Schoenberg.

The Crows tweeted: ‘Brodie Smith has been stretchered from the ground after a head knock on the turf following a marking contest. We’ll provide an update as soon as possible. Harry Schoenberg has come on as the medical sub.’

Smith later took to Twitter to provide fans an update, thanking well-wishers for their support after his heavy knock.

‘Thanks for the love,’ he wrote. ‘Didn’t quite nail the landing! Back home and feeling alright’.

Elsewhere, the inconsistency of the AFL’s umpire dissent rules were on full display yet again after Adelaide’s Lachlan Murphy escaped punishment for clearly holding his arms out wide against GWS.

The Crows endured a frustrating first half on home turf on Saturday afternoon, with the Giants at their imperious best to race into a 59-point lead at the break at Adelaide Oval.

Crows star Murphy thought he had reduced that hefty deficit with two minutes remaining of the second quarter, appearing to kick through the posts to add six points to his side’s total. 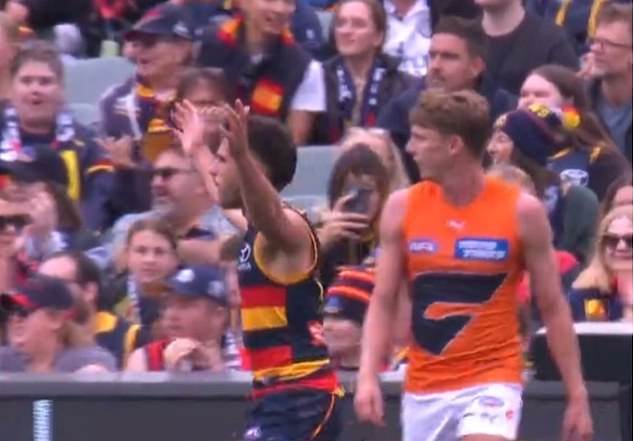 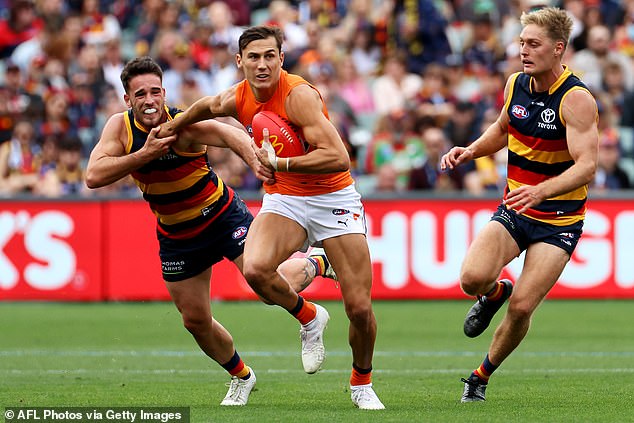 However, the umpires found that the ball just grazed the post as it went through, resulting in one point being awarded.

After learning of the umpire’s decision, Greene was clearly seen reacting to the call with his arms held aloft, an action which has seen other players cop a 50m penalty.

However, GWS were not the beneficiaries of a 50m call and the game continued as normal, adding more uncertainty to a rule that has certainly divided the AFL community.

It was a half to forget for the Crows who were roundly jeered off the park following a dismal display on home turf, with GWS rolling back the years with a sensational performance at just the right time for Leon Cameron. 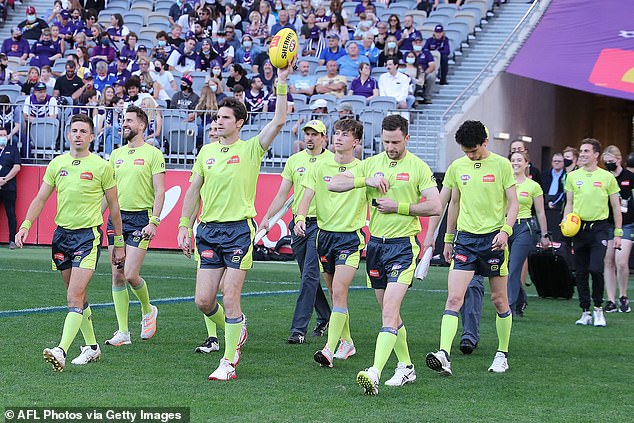 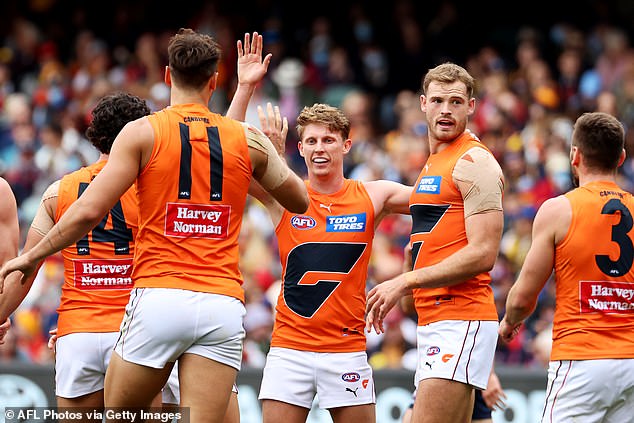 The Giants coach has been under heavy pressure in recent weeks owing to turgid displays, with reports suggesting that his relationship with the GWS hierarchy was wearing thin.

But the returning Toby Greene may have bought Cameron more time with a virtuoso individual performance, kicking four goals and breathing new life into his side’s forward line.

‘This is as clinical effort from the Giants as we have seen for several years, since their Grand Final appearance here,’ Dermott Brereton said on Fox Footy.

David King lauded Greene’s display, saying: ‘Over the last three weeks they have been the poorest forward 50  in the comp and you put some talent in there and sometimes it corrects all problems.

‘Toby Greene is everything for them, he is their spark. When he is on, they walk taller.’

GWS rounded out a comfortable 59-point victory to end their three-game losing run on Saturday.