It’s hard to know who have been the biggest muppets over the past few weeks – AFL or NRL players – but one thing is for sure, Bryce Cartwright is going to be hard to beat for individual honours.

As officials from both of Australia’s major football codes move heaven and earth to get back on the field, selfish players are doing their best to sabotage the rescue operation.

Whether it is adhering to social distancing rules, staying off the grog or having an anti-flu shot, they just can’t seem to get with the programme.

As one very highly connected official said to me this week: ‘I just can’t believe these blokes. They only have to keep their noses clean for a couple of weeks until all the ducks are in a row and they can’t manage it.

Gold Coast Titans star Bryce Cartwright (pictured with his eldest child and wife, Shanelle) is refusing to undergo an anti-flu vaccination – a government requirement for the game’s proposed return on May 28 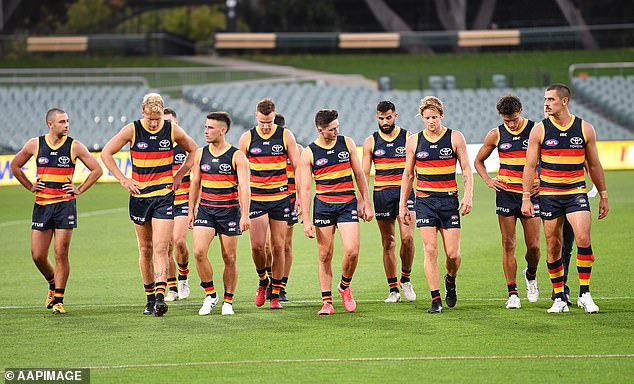 Adelaide Crows officials admitted breaking AFL coronavirus protocols by taking 16 players to a Barossa retreat and training them in groups of eight. Players are pictured after round 1

‘The rest of us seem to be able to follow the rules, but not them.

‘Peter V’landys and Gillon McLachlan must be pulling their hair out. The amount of work that is going into keeping the governments, police, doctors and broadcasters happy in order to get back on the field, and some player decides he has to go on a camping trip with his mates or go dancing with five girls or get pissed and prang his car.

‘How dumb are these d**kheads? I tell you what; football would be a great sport if it wasn’t for the footballers.’

The list of infringements by AFL and NRL players over the past month as the codes’ administrators engage in delicate negotiations to get the games back up and running have done little to change the public’s view of many of them as spoilt, over-paid, entitled brats. 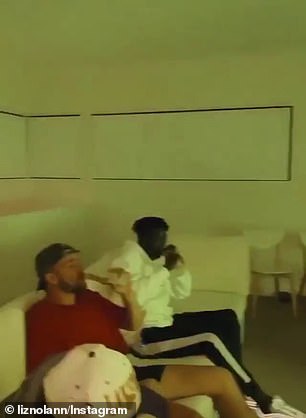 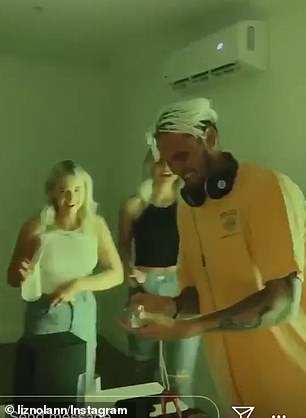 2) North Melbourne players Nick Larkey and Cameron Zurhaar hosting a party for 10 at their Kensington home.

3) Fremantle players Luke Ryan and Jason Carter fined by the club for attending a party hosted by Carter in Perth.

4) Western Bulldogs vice captain Lachie Hunter having his driver’s license suspended for drink-driving and being issued with a fine for breaching public health protocols after allegedly crashing his SUV into parked cars at Middle Park. Team-mate Bailey Smith was also questioned after driving Hunter to the home of fellow Bulldogs player Billy Gowers after the accident

5) Adelaide Crows officials admitting to breaking AFL coronavirus protocols by taking 16 players to a Barossa retreat and training them in groups of eight.

6) And, perhaps dumbest of all, Penrith Panthers star player – and coach’s son – Nathan Cleary fined by both the NRL and police after being seen on social media video dancing with five young women. After initially claiming the women had dropped in to his home and were waiting for an Uber, he later admitted he had driven to collect them and bring them back to party with him and his housemate, fellow Panther Tyrone May. 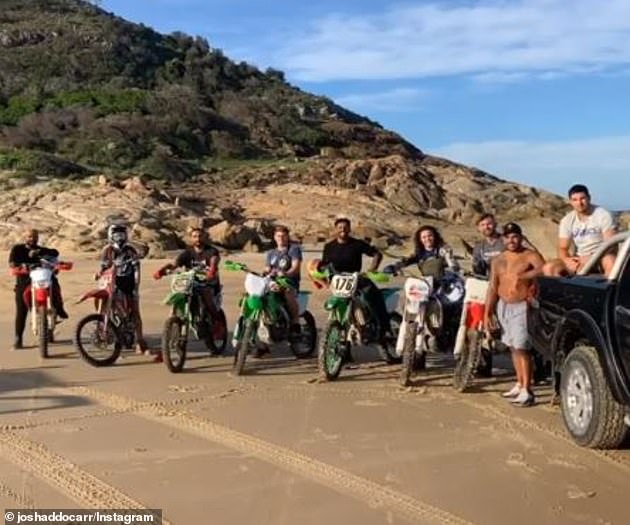 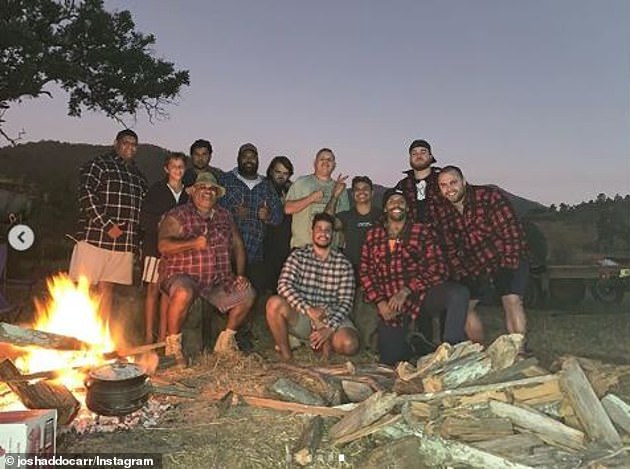 Which brings us the king of the anti-vaxxers, Bryce Cartwright.

It has taken the Gold Coast Titans player three years but he has finally become the biggest name in the game. Too bad it has nothing to do with what he does on a football field.

The $500,000-a-season backrower has been little more than an abject failure since he was offloaded by the Penrith Panthers to the Titans prior to the 2018 season.

So pathetic was his first year on the Gold Coast that the club’s coach Garth Brennan asked him if he really wanted to continue playing the game after dropping him from the side.

Speaking at a media function to launch the 2019 season Brennan admitted he thought Cartwright might be happier finding another job. 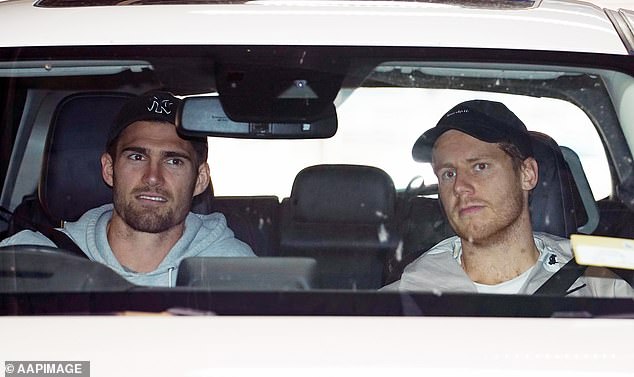 ‘We had that conversation – do you really want to be a footballer anymore?’ Brennan told the audience.

‘If he didn’t want to be a footballer then I wanted to try and help him. The last thing I wanted him to be was in a dark place, depressed and not happy because he was being forced to play footy when he didn’t really want to.

‘I’ve got to think of the welfare of my players. That was part of the conversation I had with him. If he didn’t want to play, I was there to help him be happy in life.’

According to Brennan, Cartwright assured him that he did want to keep playing the game and pocketing his half a million dollar a year salary.

He entered the 2019 season in good physical shape but failed to win over the fans in a year in which the Titans won only four games, finished bottom of the table and Brennan was sacked.

Now he is proving a roadblock for the Titans and the NRL as a whole by refusing to undergo an anti-flu vaccination – a government requirement for the game’s proposed return on May 28. 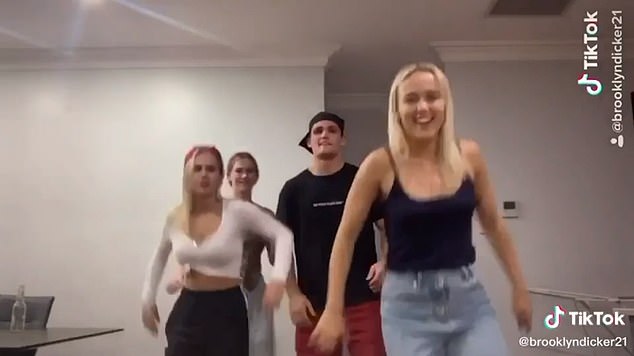 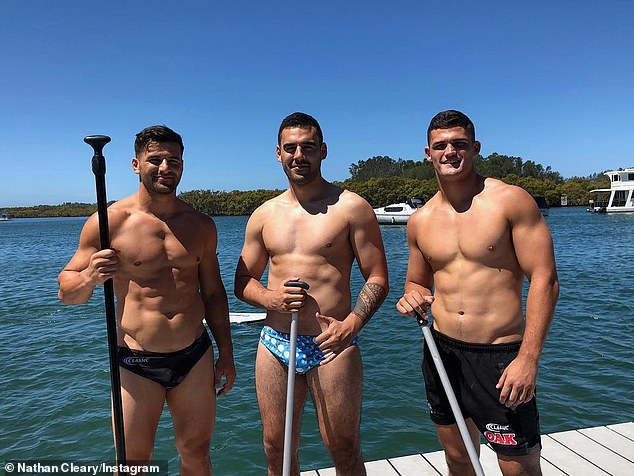 While some other players also had reservations about having the ‘jab’ Cartwright and his social media influencer wife Shanelle became the face of the anti-vaxxer movement.

It was a matter of principle, they said. They didn’t vaccinate their kids and there was no way Bryce was going to back down, even if it meant he had to sit out the season.

Shanelle even went so far as to liken the plight of the anti-vaxxers to Jews during the holocaust.

If it wasn’t terribly politically incorrect to even suggest it, you could be forgiven for thinking the pair were loving all the attention.

And then the great compromise. Facing a $450,000 pay cut Cartwright got an exemption from the Queensland government – not based on his almost religious anti-vax zeal or unshakeable principles, but because he presented a certificate from his doctor saying that he once had a bad reaction to a flu shot.

So hallelujah brothers and sisters, Bryce is Back – although Titan’s supporters could be wondering what all the fuss was about.

‘It’s not as if he would have been missed,’ they could argue. ‘On or off the field.’