A former AFL footballer has opened up on his harrowing battle with drug addiction and a stalker that lasted for more than a decade.

Jonathan Hay is a 153-game veteran defender from Hawthorn and North Melbourne who retired from professional football in 2007.

The 40-year-old has spoken out on his crippling drug addiction that saw him abusing substances including methamphetamine, valium and morphine at the height of his playing career.

The 2001 All-Australian told The Herald Sun he was prescribed cancer-grade oxycodone tablets and at his lowest point ingested more than 1,000 milligrams in a hotel room and wondered if he would ever wake up again.

Jonathan Hay (pictured in 2006) abused drugs including ice, valium and morphine at the height of his playing career

‘I was completely in denial. I was continually off my face and passing out and people knew,’ he said.

‘You can tell by someone’s eyes they are taking drugs and I denied it and denied it, and finally family and friends got around me and said, “You need to do something about this”.’

Hay’s journey with drugs began in 2001 after suffering a knee injury and having an operation.

In recovery Hay had access to a cabinet in the Hawthorn doctor’s room which was filled with various pain killers and sleeping tablets and led to Hay consuming large amounts of drugs on a daily basis.

‘I would get through training and it would be like a reward to myself, I would get off my face with sleeping tablets and valium,’ he said.

‘That went on for a couple of years and then I went doctor shopping. I understood the lingo of what to say and I had the doctors fooled. And they were giving me what I wanted and that’s when I got my hands on endone and morphine and more valium. It was getting out of control.’

Hay said he would take anything to get high including recreational drugs such as cocaine and ecstasy to take his mind away from his life.

His football form began to suffer and he was stalked for five years by a crazed Hawthorn fan, who Hay had spotted watching him sleep through his bedroom at night. 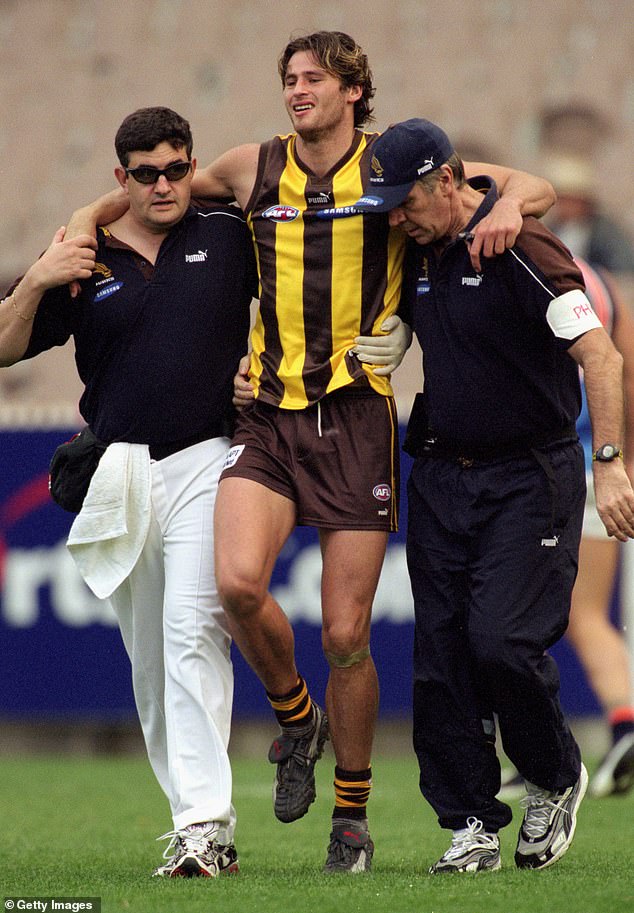 Hay is taken from the field for Hawthorn in May 2001. Hay played 153 games in his career between Hawthorn and North Melbourne before retiring in 2007

Hay was diagnosed with bipolar disorder in 2003 and transferred to North Melbourne for the 2006 season.

His mental state was in disarray, as Hay recalled crying in his car conjuring the courage to attend training sessions and considering injuring himself to keep himself off the field.

Hay retired in 2007 and became a personal trainer before moving on to study exercise science and medical imaging.

Substances continued to play a major role in his life as he became a father to his two sons Arun and Arlo.

Hay said his drug use had put his children in danger, leading him to check into a rehab facility at Delmont Private Hospital.

The facility taught Hay to meditate and highlighted his values, leading him out of addiction to focus on his family.

Hay is working with mental health organisation Male Hug and hopes his story can inspire others to turn around their lives. 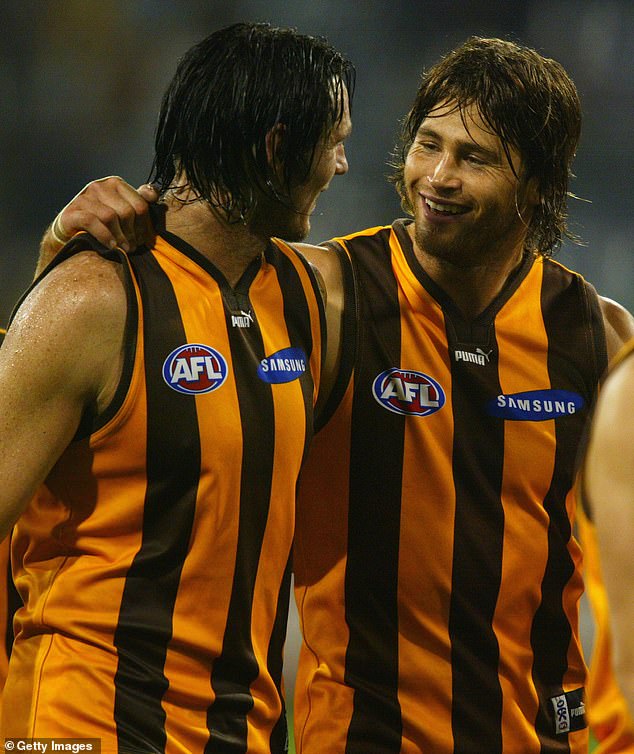 Hay leaves the field after a match in April 2003 with teammate Peter Everitt. Hay hopes his recovery story will inspire others to change their circumstances