AFLW: The Project lash out at Steve Price over women’s sport

Steve Price defended his controversial column criticising the AFLW while getting into a heated argument with his co-hosts on The Project.

In an opinion piece written for the Herald Sun on Friday, the media personality slammed the standard of the women’s league and questioned the level of coverage and funding of the matches.

The conservative commentator had a dig at the low scores of the women’s games and and dwindling crowd attendance, saying there would be drastic changes made if the same was happening in the men’s matches.

‘If you leave an AFLW match thinking you’ve seen a great game you’re kidding yourself, because even high school boys are better to watch,’ Price said in his scathing review.

‘You knew exactly what you were doing and executed it perfectly,’ Bickmore said.

Do you agree with Steve Price about the AFLW?

‘Let’s look at some of the quotes from it: You go on to say AFLW is not elite sport and the female version of the Australian game of football is substandard. It’s not deserving of the attention and funding that it gets. So it’s in its fifth year, things take time to build.’

Price replied: ‘Great thing about sport is you can all have an opinion and debate about it, which is what I was doing.

‘I absolutely 100 per cent believe it. Again yesterday you had a one-point score from one of the teams and the crowds are simply not going.’

He doubled down on his claim the AFL has destroyed the product by quickly expanding to 18 teams when there was not enough talent, before Helliar ripped into Price for disparaging the dreams of young women.

‘This is better than it was four years ago, it will continue to get better. 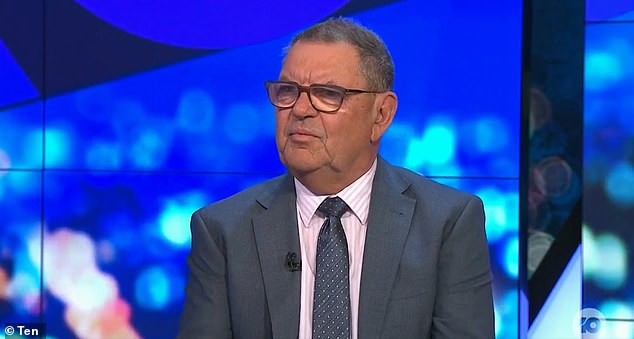 Price doubled down on the story, saying it was his opinion and crowd numbers suggested he was right 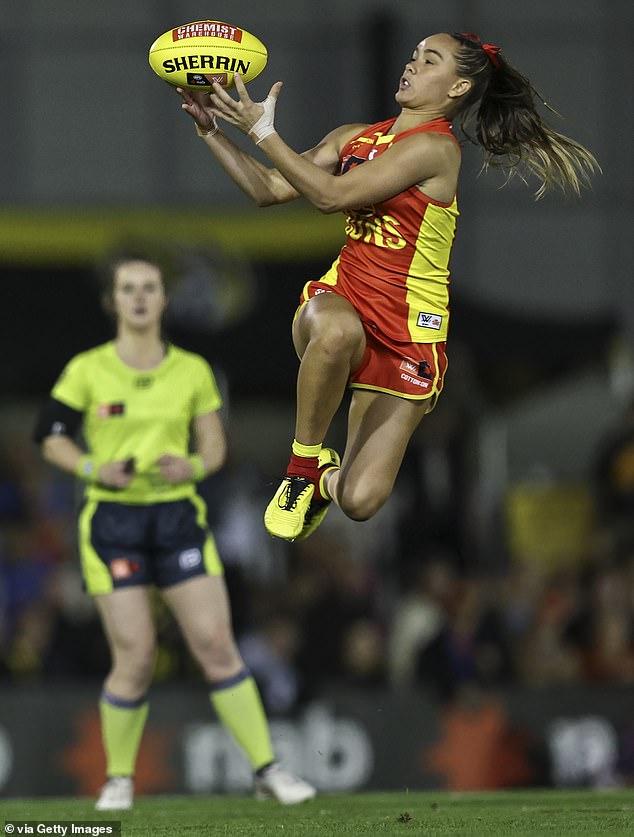 In an opinion piece written for the Herald Sun on Friday, the media personality slammed the standard of the women’s league and questioned the level of coverage and funding of the matches

Price responded: ‘Let me clear up what I am saying simply. I think the AFL went too early and too hard. There is not enough talent to fill 18 teams.

‘They should have gone more quietly and you wouldn’t have the issues you are having at the moment. The media exposure is extraordinary for something that is not very good.’

Helliar then asked whether the Herald Sun columnist simply didn’t like women playing physical sport, before Price defended his take by listing other sports he enjoyed watching women play.

Aly added that the women’s competition was lucrative for clubs and the AFL given sponsors are lining up to promote the product – suggesting his co-host look into the money it is generating rather than just the quality of football.

‘Do we accept that the corporate world and the AFL’s making a very clear business decision, do you accept that they disagree with you and they might have a good reading of the market that you don’t?’ he asked.

‘Perhaps. This is an opinion piece. It is not a factual piece. It is my opinion. I don’t like it,’ Price replied, before Bickmore accused him of ‘punching down’ to the AFLW.

‘I don’t think you understand writing a column is about an opinion that you have and that is my opinion. I don’t mind that you don’t agree with it,’ he said. 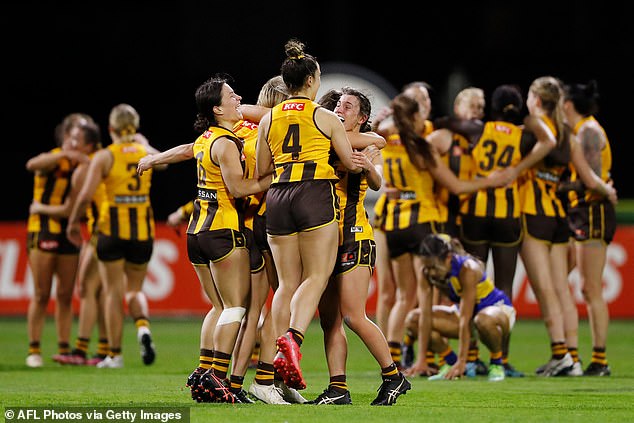 In an opinion piece published on Friday, the Herald Sun columnist slammed the standard of the AFLW (pictured) and questioned the coverage of their matches

In the column, Price wrote there should be a reduction in the number of teams within the AFLW – suggesting there is not enough talent for 18.

The radio broadcaster also said that in his opinion the male players in the second-tier Victorian Football League were ‘superior’ to those in the women’s league.

‘While country and metropolitan football, until very recently, was starved of funding and ignored by the AFL, the women’s game has been promoted, funded and supported outrageously by an AFL pandering to political correctness and the age of equality and inclusiveness in all aspects of our lives,’ he said.

Tickets to an AFLW game are free for children while adults pay $10 each. 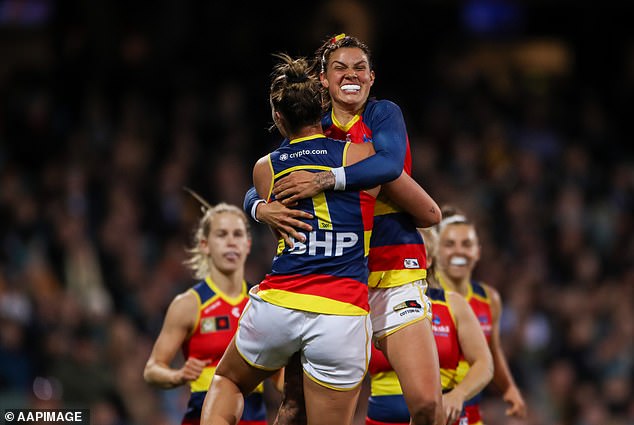 While Price said ‘female sport is every bit as good as elite men’s sport’, and praised several successful female athletes and teams, his blunt view of the AFLW was met with heavy criticism on Twitter (pictured is the Adelaide Crows)

Price said a recent game between the Gold Coast Suns and the West Coast Eagles had 860 people turn out to watch. He guessed the spectators were mostly made up of friends, family and staff.

The commentator said opening up the stadium for such a small number was ‘ridiculous and embarrassing’ to the AFL.

The decision to scrap the minute’s silence after the Queen’s passing was another gripe Price had with the AFLW.

While Price said ‘female sport is every bit as good as elite men’s sport’, and praised several successful female athletes and teams, his blunt view of the AFLW was met with heavy criticism on Twitter.

‘If he doesn’t like women’s footy he can just not watch it’s that easy,’ one tweeted.

‘Couldn’t disagree more…you’re 100% wrong, I went to the Hawks v Swans game last Friday and walked away thinking ”Wow how good was seeing that live”. Everyone do yourself a favour go see a live game,’ another commented.

A third said: ‘If you leave a Steve Price piece thinking you’ve read a great article you’re kidding yourself, because even high school students are better to read.’

‘No one asked for your opinion.. if you don’t like it, don’t watch! Plenty of people do and love seeing the changes coming with the new seasons…move on mate,’ another user wrote. 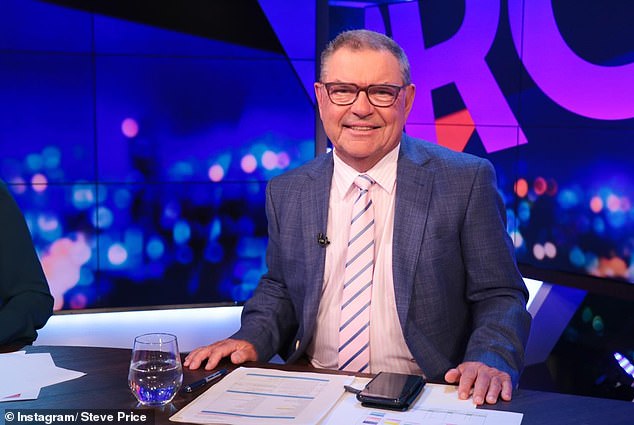 One woman said: ‘It took the female cricketers time to catch up to the men… now look at them. It’s a process…clearly too difficult a concept for some.’

The AFL Players’ Association also hit out at Price and said his comments were ‘offensive and inaccurate’.

‘Nearly 600,000 women and girls play football in Australia, and viewer and membership numbers are growing every year,’ they wrote.

‘We continue to be inspired by our AFLW members everyday and the competition is a critical part of Australian football’s future – it’s time people get used to that. We can’t wait to watch them this weekend at the footy.’