The illustrious Mexican director Guillermo del Toro has appended his name to the title of his new Netflix movie, whether to indulge his gigantic ego or to distance it from Walt Disney’s Pinocchio, I’m not sure. Maybe both.

Either way, del Toro, whose films have been festooned with Academy Awards, has by all accounts been yearning his whole professional life to have a crack at Pinocchio. But the man who made Pan’s Labyrinth (2006), The Shape Of Water (2017) and last year’s Nightmare Alley, all of them as dark as they were stylish, was never likely to give us a sugared version of the famous Italian folk tale, written by Carlo Collodi in 1883.

Sure enough, del Toro sets the story, rendered in stunning stop-motion animation, against the glowering backdrop of Mussolini-era Italy. 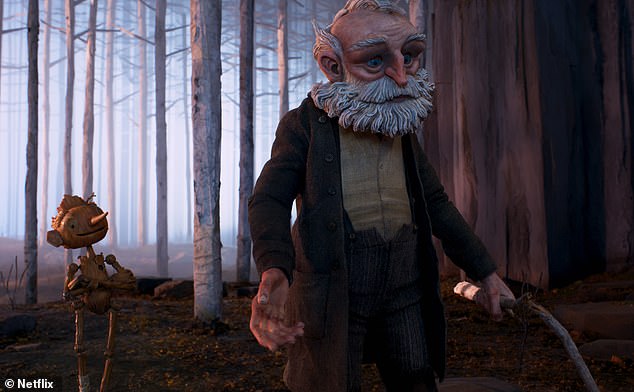 Director del Toro offers some lovely glimpses into the woodcarver’s happy life with his boy, Carlo (voiced by young British actor Gregory Mann), before showing us its abrupt end in 1916 when a warplane, jettisoning its bombs, scores a direct hit on the village church and kills Carlo outright

This is a masterstroke, actually, because the unquestioning obedience required by Fascism enables him to make a not-so-subtle point, whereby human beings behave like puppets while a puppet behaves like a human being.

Indeed, Pinocchio positively exemplifies a refusal to conform, referring, at first accidentally, to Il Duce (‘the Leader’) as Il Dolce (‘the sweet’). Enraged, Mussolini himself orders him shot. It’s certainly a long, long way from Disney, though in fairness, Uncle Walt didn’t swerve the story’s intrinsic darkness, either. His 1940 film scared the wits out of me as a child.

Del Toro has assembled a formidable voice cast, featuring Cate Blanchett, Tilda Swinton, Christoph Waltz and, as a certain cricket with a conscience, Ewan McGregor. Veteran British actor David Bradley does a particularly wonderful job as Geppetto, the ageing wood craftsman still mourning the death of a beloved son when Pinocchio springs to life to fill the void. 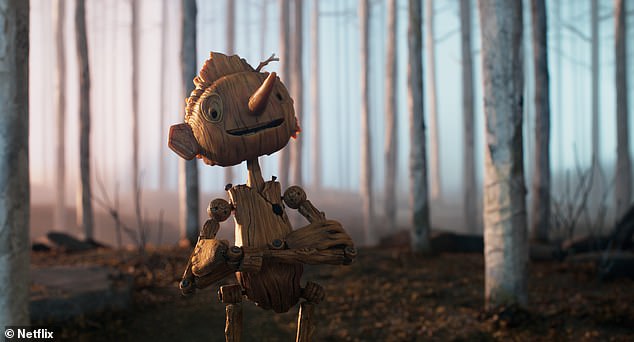 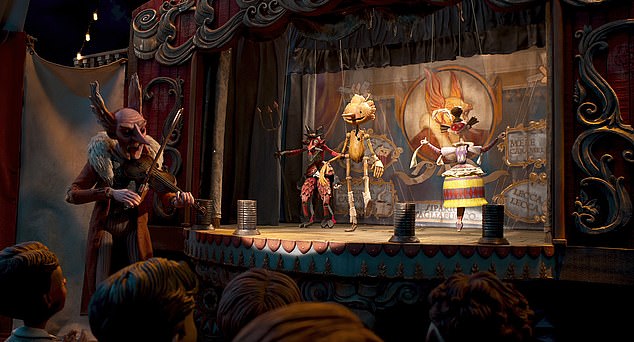 Pinocchio positively exemplifies a refusal to conform, referring, at first accidentally, to Il Duce (‘the Leader’) as Il Dolce (‘the sweet’)

Previous versions of Pinocchio, from the Disney original to Robert Zemeckis’s live-action adaptation, unveiled just three months ago with Tom Hanks as Geppetto, did not dwell on the old man’s loss.

But del Toro offers some lovely glimpses into the woodcarver’s happy life with his boy, Carlo (voiced by young British actor Gregory Mann), before showing us its abrupt end in 1916 when a warplane, jettisoning its bombs, scores a direct hit on the village church and kills Carlo outright.

I suspect aviation historians might bridle at this scene. But del Toro won’t worry about that. He is censuring war, a regular theme of his. And the tragedy also aids the narrative by leaving Geppetto a broken man, seeking refuge in the bottle until his marionette, thanks to the intervention of a benign wood sprite (Swinton, who also voices the sprite’s sinister sister, representing Death), starts walking and talking on his own. 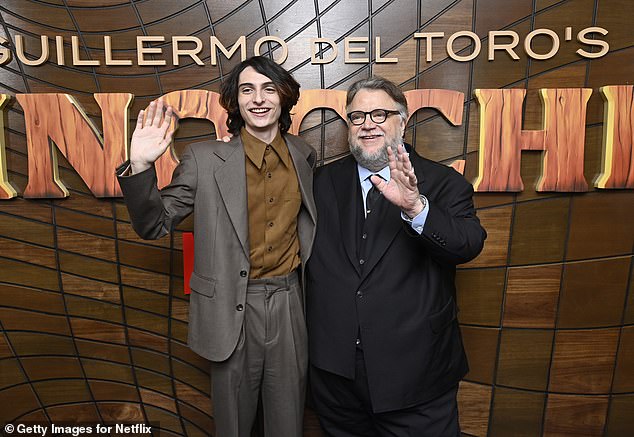 This Pinocchio (Gregory Mann again), however, is not at all like the colourfully cherubic 1940 version. He’s all brown, for one thing, and a little creepy, more like the tree ogre voiced by Liam Neeson in the 2016 film A Monster Calls. The shadow of another monster, Dr Frankenstein’s, also looms over this film. Pinocchio is a proper handful: destructive, disobedient and pretty brattish. He’s hard to like. But it makes his journey towards genuine filial love all the more redemptive and touching.

Powell and Pressburger’s eternally charming fantasy, starring David Niven as an RAF pilot who goes before a celestial court, was chosen for the first-ever Royal Film Performance — and rightly so.

Happily, there are also a few laughs along the way. McGregor’s Sebastian J. Cricket, depicted as a genuine insect rather than a tiny top-hatted song-and-dance man, provides most of them.

And a Waltz villain is always a sinister pleasure. Here he voices the devious and brutish Count Volpe, owner of a travelling carnival, who sees Pinocchio as a meal ticket. Blanchett voices, or rather squeaks, his long-suffering assistant, a monkey.

The best bits of the film are those that diverge most from the 1940 animation. Pleasure Island, where the delinquent boys were sent, is now a military training camp run by a Mussolini acolyte (Ron Perlman).

These boys do not, by the way, turn into donkeys. But there is a sea monster. And there are songs, although they don’t enhance the film, and might even diminish it.

The stop-motion technology, though, is wondrously done; Del Toro’s co-director is an accomplished animator, Mark Gustafson. Much expertise went into making this film. But if I recommended it as fun for all the family, I’d expect my nose to sprout by another inch or two. This is a Pinocchio strictly for grown-ups.

When Peter Sutcliffe, the Yorkshire Ripper, arrived at the high security hospital Broadmoor in 1984, two of his fellow inmates were identical twins from west Wales, June and Jennifer Gibbons. They stayed there for 11 years, ostensibly as a result of 1981 convictions for petty theft and arson. But they were really there because they had refused all their lives to speak to anybody except each other, and were duly deemed dangerously strange.

The Silent Twins tells their remarkable story, first highlighted by the mental health campaigner Marjorie Wallace (Jodhi May), whose book inspired this film. 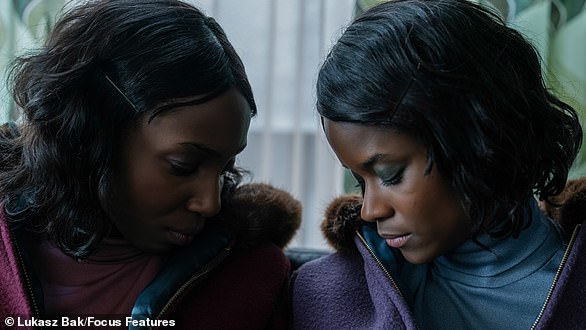 It begins playfully, with the two young actresses who play the twins as children reading the credits aloud. But once Letitia Wright (June) and Tamara Lawrance (Jennifer) take over, it gets ever darker. Polish director Agnieszka Smoczynska gets fantastic performances from her leads and throws in other quirky touches, such as stop-motion animation to depict the twins’ lively imaginations.

What she never really explains, however, is why they behaved as they did. Their vow of silence was almost certainly influenced by bullying (daughters of Barbadian immigrants, they were the only black kids in town) but the film leaves lots of questions unanswered. Nevertheless, it is as compellingly peculiar as its twin subjects.

Emancipation, set during the U.S. Civil War, is a slog in more ways than one, but above all for its central character, Peter (Will Smith).

Antoine Fuqua’s overlong film, available to stream on Apple+ TV, derives from the true story of ‘Whipped Peter’, an escaped slave whose appallingly scarred back was photographed once he joined up with the Union Army in Baton Rouge, Louisiana. The narrative focuses on Peter’s harrowing cross-country journey (including an epic fight with an alligator), with a murderous slaver (Ben Foster) leading the pursuit.

It’s beautifully shot, mainly in monochrome, and Smith is so good that memories of his infamous Oscars-night slap recede into the Louisiana swamp. But the theme — the nobility of the oppressed, the inhumanity of their oppressors — needs a better film than this to stop feeling wearily familiar.

I found Nocebo even harder going. It is a psychological horror film starring Eva Green as Christine, an affluent fashion designer who starts falling apart mentally after receiving a phone call with appalling news. That news isn’t shared with us until much later, by which time a mysterious housekeeper from the Philippines has inveigled her way into Christine’s London home.

Director Lorcan Finnegan has some punchy points to make about Third World exploitation by the West, and lands them decisively, but despite a good cast (Green, Mark Strong) I never felt the slightest bit invested in his story.

My wife was most invested in Anonymous Club, a documentary about the deeply introspective Australian singer-songwriter Courtney Barnett. For her birthday this year our children bought her tickets to a Barnett gig, which she loved. But this film is for fans only; it has very limited wider appeal.