Heart surgery is 50 per cent more successful if done in the afternoon, a major study has found.

Experts believe this is because the heart is better at repairing itself later in the day.

The human body clock – known as the ‘circadian rhythm’ – is still adjusting from the sleep stage to awake stage in the morning, but by the afternoon, it is better equipped to deal with a traumatic event such as open heart surgery.

Heart surgery is 50 per cent more successful if done in the afternoon, a major study has found

The researchers, whose work is published in the respected Lancet medical journal, called for hospitals to move operations to the afternoon in light of the findings.

At the moment, NHS hospitals deal with their most serious cases first, meaning the majority are done early in the morning.

But study leader Professor David Montaigne, of the University of Lille in France, said: ‘Our study found that post-surgery heart damage is more common among people who have heart surgery in the morning, compared to the afternoon…

‘As a result, moving heart surgery to the afternoon may help to reduce a person’s risk of heart damage after surgery.’ 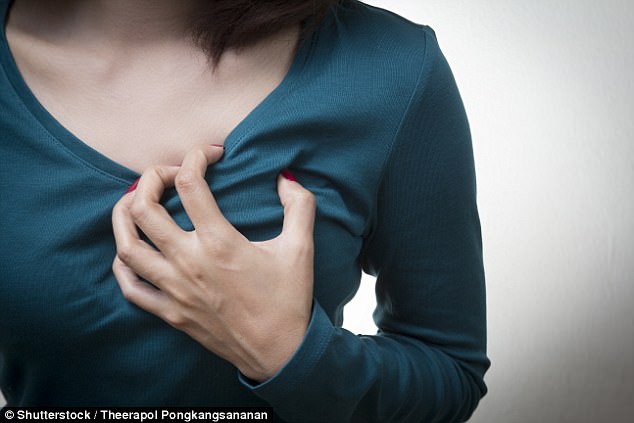 Women are more likely to die in the months after a heart attack than men because they face greater pressure to return to normal life, a study found

Researchers tracked 596 people who had undergone heart valve replacement surgery – half of them who had surgery in the morning, half in the afternoon.

Women are more likely to die in the months after a heart attack than men because they face greater pressure to return to normal life, a study found.

The study of 4,100 patients by the Technical University of Munich found women were 50 per cent more likely to die in the subsequent year.

‘They are expected to start “functioning” again sooner, which means that they are subject to bigger stresses.’

In a second part of the study, they examined another 88 patients, and found those who had afternoon surgery had lower levels of heart tissue damage.

Experts last night welcomed the findings – but stressed more evidence is needed before hospitals should change their practices.

Dr Mike Knapton of the British Heart Foundation said: ‘Thousands of people now have open heart surgery in the UK. These procedures can take many hours and come with a number of risks.

‘The time of day appears to be a significant factor in the outcome from surgery … If this finding can be replicated in other hospitals this could be helpful to surgeons planning their operating list.

Graham Cooper, president of the Society for Cardiothoracic Surgery, said: ‘In the UK, surgeons tend to operate on the sickest patients in the morning, meaning we might expect them to have very slightly worse outcomes.’