A 71-year-old man involved in a ‘domestic incident’ in north London is a top adviser to Age UK, MailOnline can reveal.

Neighbours named Mervyn Kohler as the man found at an Islington house with stab wounds. His condition is not thought to be life-threatening.

His wife Elizabeth, 71, was found unresponsive and is fighting for her life in hospital after the incident at around 8.30pm yesterday.

She was initially thought to have also been stabbed, but police later confirmed she had not been.

No arrests have been made and no other details of what happened have been released.

Mr Kohler is listed on NHS England’s website as an external affairs adviser at Age UK, having been head of public affairs at Help the Aged since 1984.

The website says: ‘This, with his (nearly) thirty years of long service, means he plays a part too as the public face of the Charity, at conferences, seminars and in the media.’

He is also on the board for a number of charities and on several public bodies. He currently serves on the Fuel Poverty Advisory Group – now called the Committee on Fuel Poverty – according to the website. 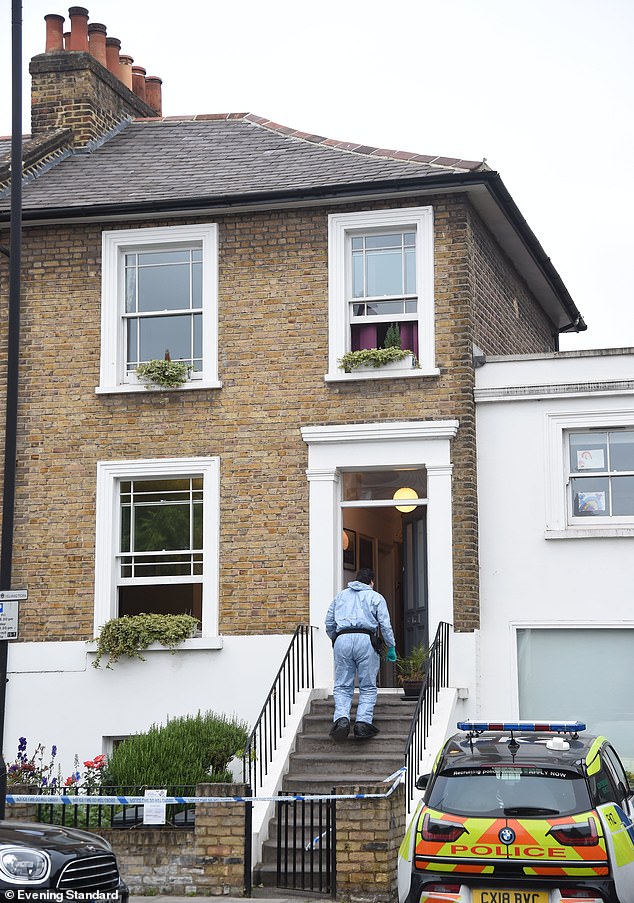 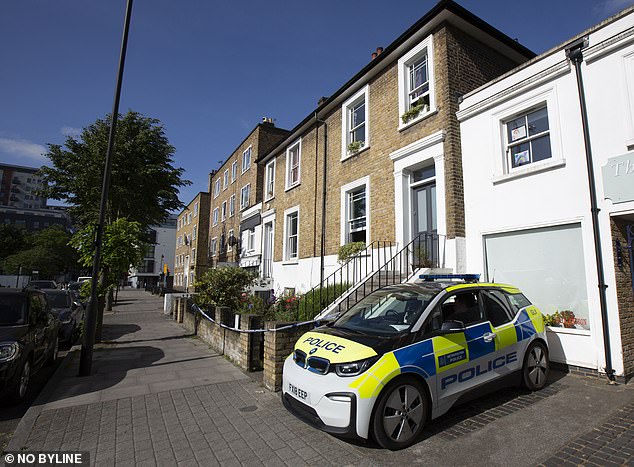 A police car remained outside the house in Islington, near the border with Hackney, this morning 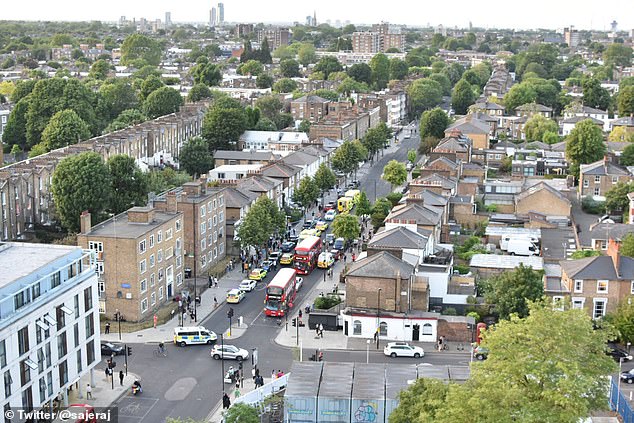 Mr Kohler’s wife Elizabeth, 71, was found unresponsive and is fighting for her life in hospital after the incident at around 8.30pm yesterday. Pictured: The scene yesterday

Dariusz Zych, who lives next door confirmed the couple live at the house, saying: ‘I would often see her in the garden and I sometimes saw him walking in the street and near the canal.

‘He seemed to be in a bad condition, walking slowly and sometimes stopping to catch his breath.

‘I didn’t know them well, only spoke to them sometimes in the street. I have seen them both wearing t-shirts from a charity for volunteers. I would take the mail and parcels in for them.’

Today the house is still taped off, with a police car sitting in the next door driveway. 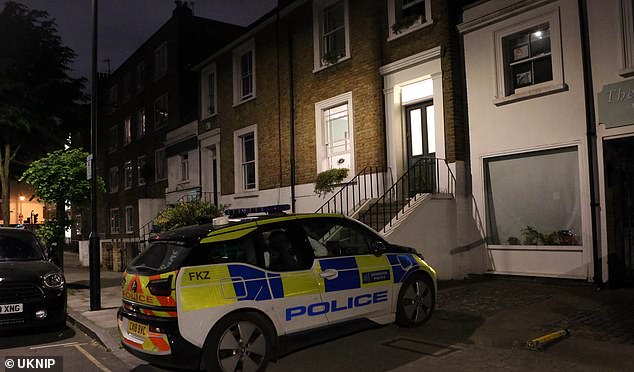 The woman was initially thought to have also been stabbed, but it was later confirmed she had not been 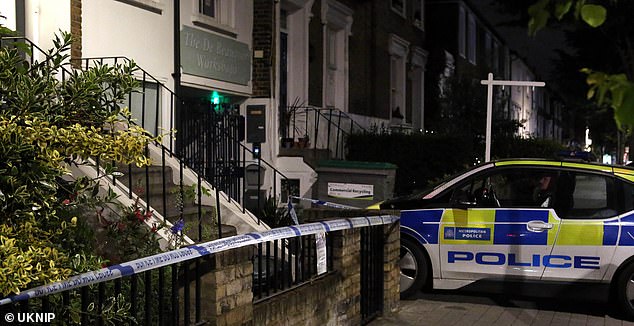 A crime scene remains in place at the property, in Islington, north London after a ‘domestic incident’ 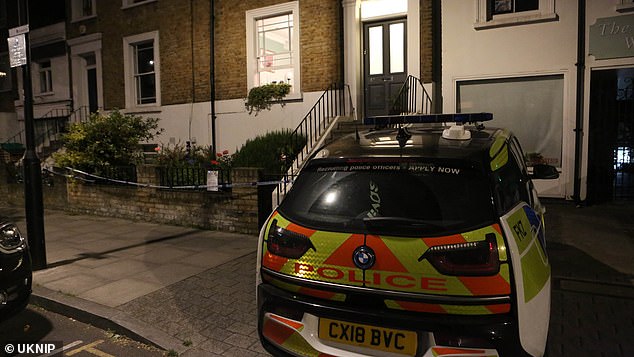 Police have not yet released further details of the incident, only saying that it was domestic

A neighbour, who did not want to be named, confirmed Mervyn and Elizabeth Kohler lived at the house and many in the community were worried about what happened.

She said: ‘She has a heart of gold and is so well respected in the community. They’re so well liked.

‘She is very involved in the local church and the WI. They are a lovely couple, I can’t believe either would do anything like that.

‘Lots of people are very worried about what’s happened. I think he used to work for Age UK.’

Another neighbour described the scene on Wednesday evening as emergency services filled the road.

He said: ‘First thing I heard was all the sirens. I looked out the window and there was about six or seven police cars, three or four ambulances. There were a lot of paramedics and doctors.

‘Lots of people were in the road, the police were trying to disperse them. Then I saw the man and woman coming out on stretchers. She came out first, then he came out about 10 minutes later.

‘The road was closed off at both ends, then opened up again at about 10.30pm.’

A woman who works in a studio next to the couple’s house said: ‘they are a really sweet elderly couple’.

She said: ‘I don’t really know them other than to say hello. They have never had a domestic incident and I’ve been there like 12 years.

‘I’m so surprised because honestly never a raised voice, never, nothing, nothing, and we would hear everything, trust me. There’s no sound proofing where we are.’ 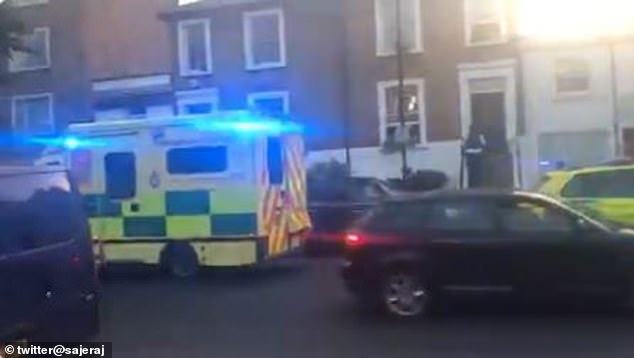 A man, also in his 70s, suffered stab injuries in the incident in Islington, though he is not in a life-threatening condition

The woman’s offices are on the second floor of the building and looks over the couple’s garden.

‘It’s quite intimate, but I don’t really know them. They just seemed like a really nice couple, really nice. Seriously the quietest people you could image.

‘No issues at all, so that’s just a complete surprise, can’t be them sort of thing. Proper shocker. They’re not even moody people, you know. Not even an edge to them.’

Police said they were called to the property at 8.24pm yesterday and took a man and a woman to hospital.

The force said a man had suffered stab injuries but they were not believed to be life-threatening.

It added: ‘The woman was unresponsive. She was initially thought to have been stabbed, but it is now confirmed she had not been.

‘Extensive inquiries into the circumstances continue. A crime scene and road closures are in place.’