Around 400,000 elderly people have lost the chance of free help to live at home over the past seven years, a report warned yesterday.

Tens of thousands of frail and vulnerable Britons have been pushed out of the shrinking circle of those who qualify for home assistance as councils cut spending, analysis from Age UK found.

The charity also warned of ‘care deserts’ where shortages of care suppliers and workers means it is impossible for people to find the help they need to live at home.

According to a report from Age UK, around 400,000 elderly people have lost the chance of free help to live at home over the past seven years (stock image)

Its report said that since the mid-2000s, rules on the level of disability required to qualify for free care have been tightened so it is typically only available to those who ‘experience very significant difficulties in managing essential day to day tasks’.

Rules for councils say that anyone who qualifies for care on health grounds may still be asked to pay for at least some of it if their income is over 25 per cent higher than the level of Pension Guarantee Credit, the benefit paid to older people on low incomes. This means someone may be charged as long as they are left with £203.75 to live on – or £311 for a couple.

Age UK added that councils have cut spending on adult social care by 6 per cent since 2010, while the country’s over-85 population has actually risen by 6 per cent. This has meant that the average spend per adult has in fact fallen by 13 per cent, from £439 to £379, the report said. Other findings include that three million hours of care work have been withdrawn since 2015.

The analysis found that difficulties faced by those trying to get help included long waits for their needs to be assessed by social workers, and poor services when anything is provided.

Miss Abrahams raised the case of a woman identified only as Sally, and added: ‘This is a crisis for many families too, like Sally’s, left to care for her deeply unwell father-in-law because the local council says there is no home care available.

‘We have been worried for some time about the possible emergence of care deserts – places where it is impossible to find care – and now it seems our worst fears have been realised.’ 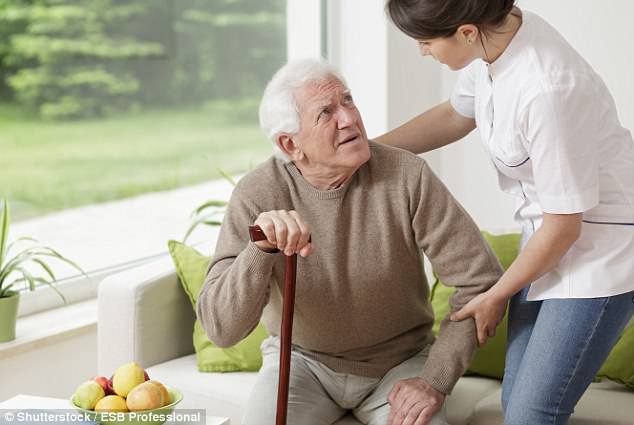 Analysis found that difficulties faced by those trying to get help included long waits for needs to be assessed by social workers, and poor services when anything is provided (stock image)

Labour’s social care spokesman Julie Cooper said: ‘This shows the desperate situation faced by older people in need of social care, who are being failed by this Tory Government. Cuts have seen £6.3billion lost from social care funding since 2010, leading to worse access at a time of unprecedented demand.’

A spokesman for the Department of Health and Social Care said new government proposals on reforming the care system will be published in the near future.

‘It is unacceptable if people are not receiving the care they need from local councils,’ she said. ‘We changed the law so councils now have to carry out a thorough assessment of peoples’ needs, and have given councils £9.4billion more dedicated funding over three years to support them in this.’