By Sam Baker and Faith Ridler For Mailonline

A Jet2 flight from Glasgow to Turkey was diverted to Manchester Airport because of an ‘aggressive passenger’.

The flight, to Bodrum, was meant to arrive yesterday but the pilot was forced to alter its course after leaving Glasgow due to the ‘behaviour of a disruptive passenger’.

Greater Manchester Police met the plane upon landing and were thanked by the airline for ‘their handling of the situation.’

A Jet2 flight from Glasgow which was due to land in Bodrum, Turkey, was diverted to Manchester because of an ‘aggressive passenger’ (file image)

Jet2 have since issued a statement saying they ‘will not tolerate this type of behaviour’.

A spokesperson said: ‘Our Glasgow to Bodrum flight diverted to Manchester Airport on September 21 because of the aggressive behaviour of a disruptive passenger.

‘We would like to thank our highly-trained crew, as well as the Greater Manchester Police who offloaded the passenger, for their handling of this situation.

‘As a family-friendly airline, we will not tolerate this type of behaviour. 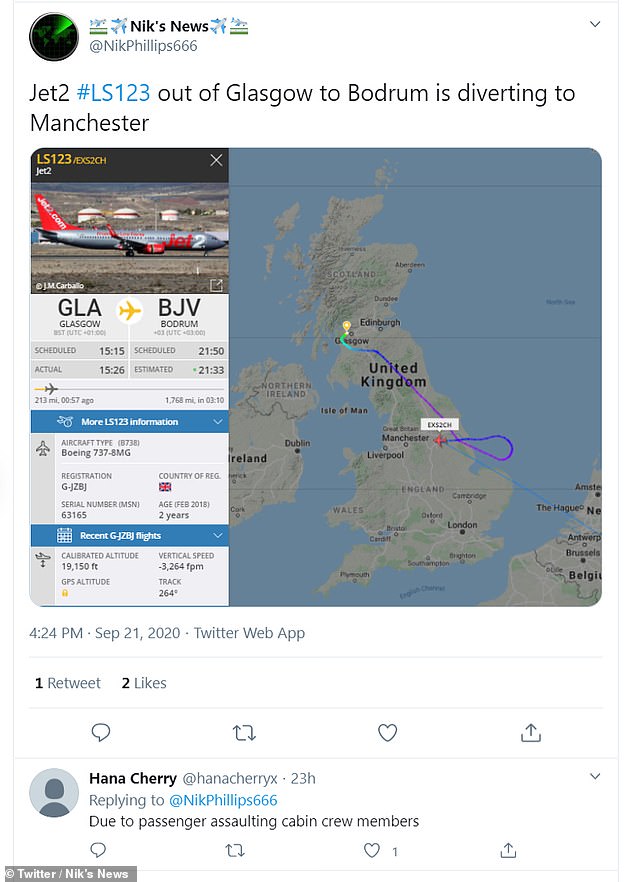 The flight, from Glasgow, was set to touch down in Turkey yesterday when the pilot was forced to alter course due to the ‘behaviour of a disruptive passenger’. One person on Twitter claims that a passenger assaulted members of staff onboard

‘Customers travelling for their well-deserved holidays, as well as hard-working colleagues doing their jobs, should not be subjected to this behaviour under any circumstances.

‘We will be taking action to ensure that the individual responsible is held accountable for their actions, whilst fully supporting the authorities with their investigations.’