New fissures have opened in the erupting volcano on the Spanish island of La Palma, spewing lava and ash into the air, with 1,000 buildings destroyed so far.

The Cumbre Vieja volcano blew open two more fissures on its cone on Friday, with authorities reporting ‘intense’ activity in the area and saying it is more aggressive than when it first erupted on September 19.

The new fissures, about 50 feet apart, sent streaks of fiery red and orange molten rock down toward the sea, parallel to an earlier flow that reached the Atlantic Ocean earlier this week forcing thousands to evacuate.

The Cumbre Vieja volcano continues to erupt on the Canary Island of La Palma, spewing lave into the air and down the slopes, as seen from Tacande de Arriba, Spain, October 2, 2021 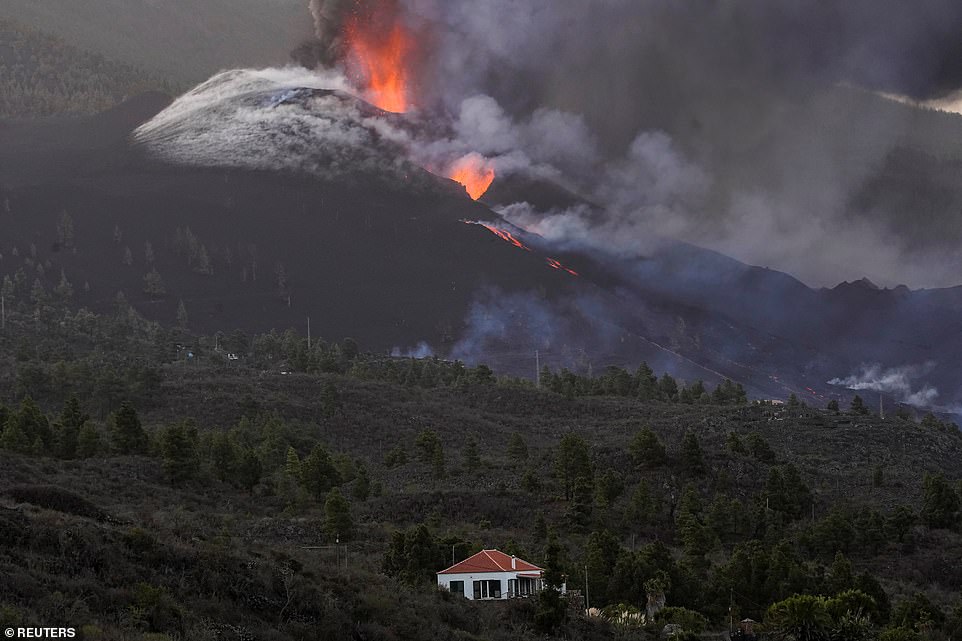 Pictured: A building is seen in the shadow of the volcano as it erupts in the background, spewing lava into the air 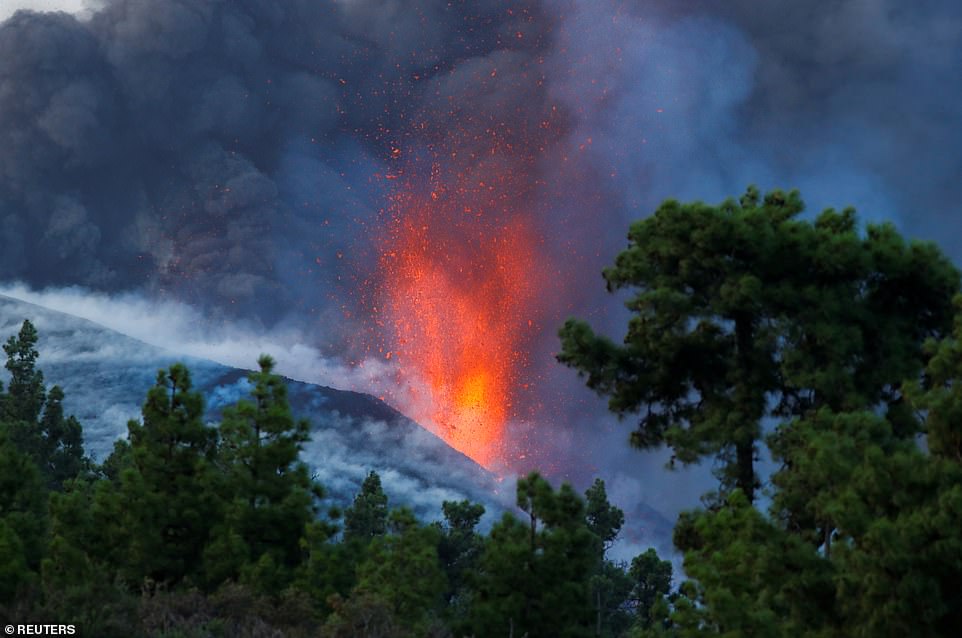 The Cumbre Vieja volcano continues to erupt on the Canary Island of La Palma, as seen from Tacande, Spain, October 2, 2021 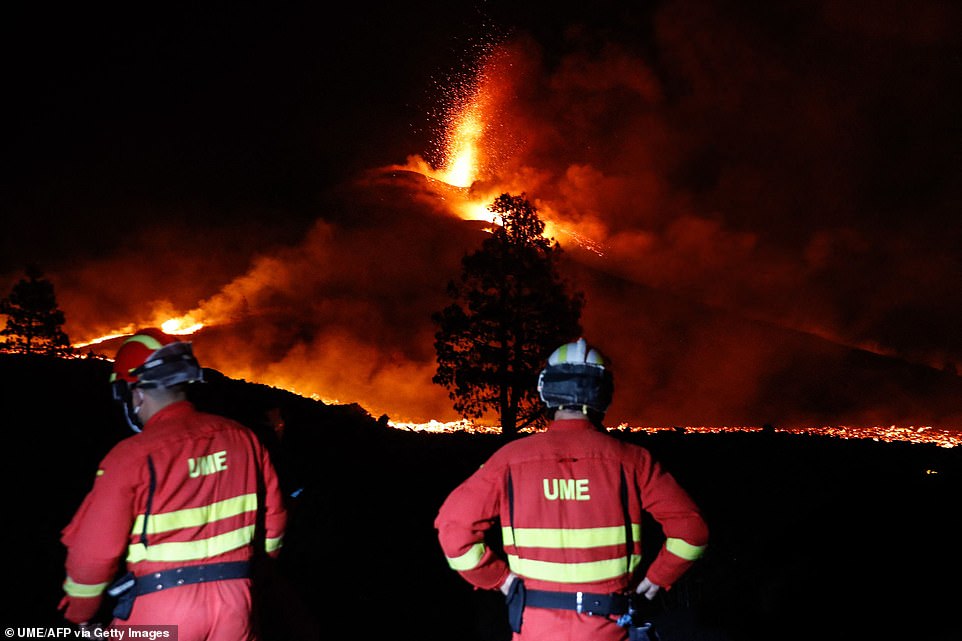 This handout picture released by the Spanish Military Emergency Unit (UME) shows UME members monitoring the lava flow produced by the Cumbre Vieja volcano, in the northern area of the Canary island of La Palma on the night of October 1, 2021 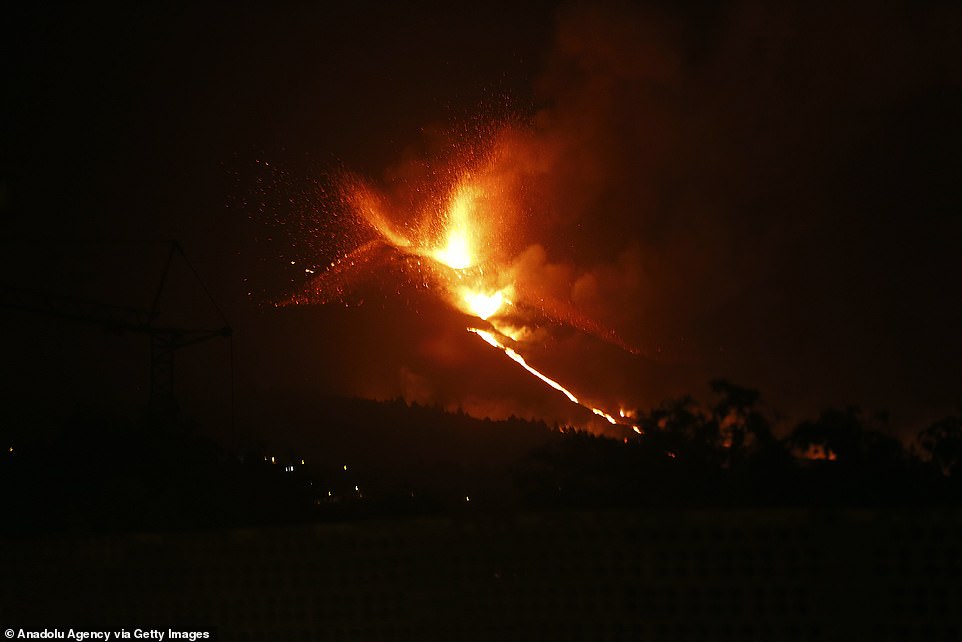 Pictured: Lava can be seen being fired into the air from the Cumbre Vieja volcano, which continues to spew lava, on the Canary island of La Palma in El Paso on October 02, 2021 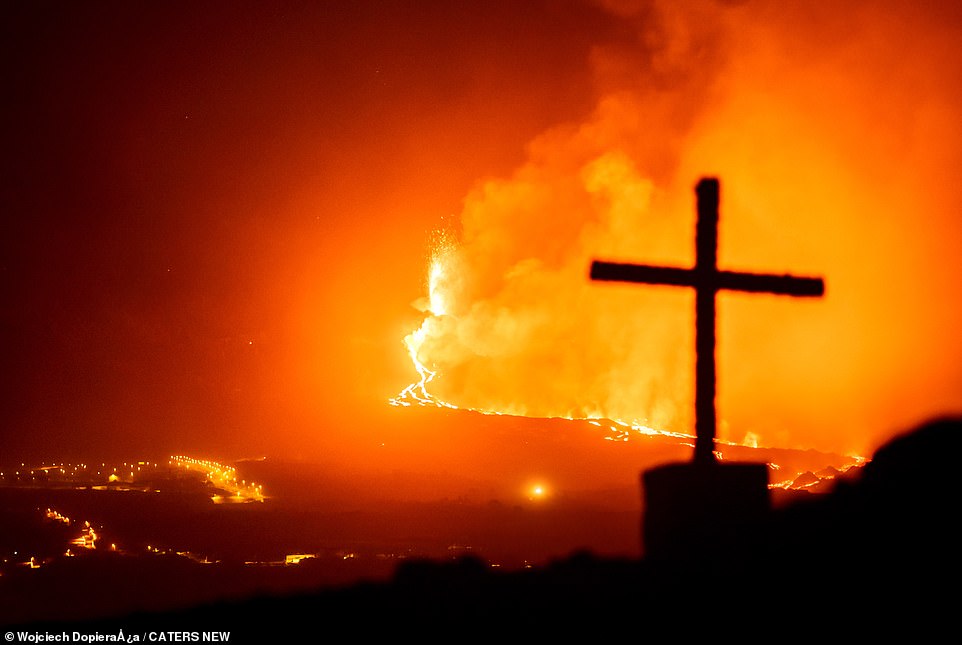 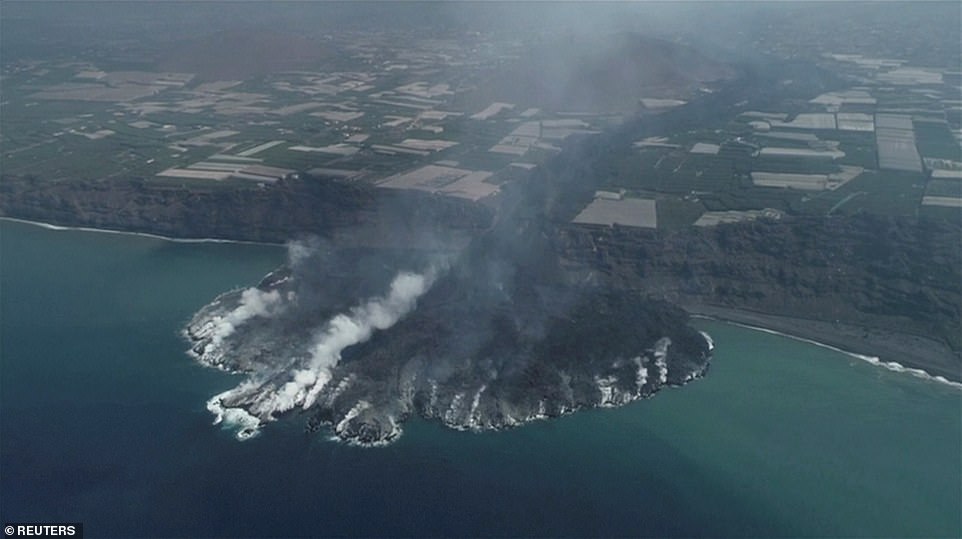 An aerial view shows a rocky outcrop that extends Spain’s La Palma coastline, after lava from the Cumbre Vieja volcano poured into the ocean, in this screen grab taken from drone footage

Lava from the new vents is carving a different path from previous flows and raising fears of more destruction, while fine ash forced islanders to don masks and goggles.

The prompt evacuation of more than 6,000 people since the September 19 eruption helped prevent casualties.

Meanwhile, a new area of solidified lava where thFe molten rock is flowing into the sea extends over more than 20 hectares.

Officials were monitoring air quality along the shoreline. 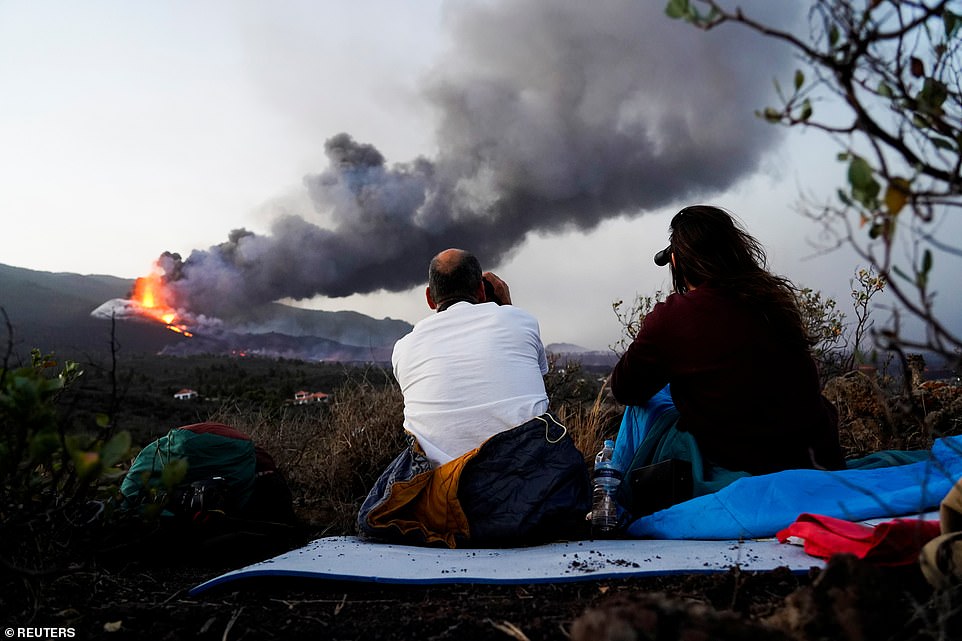 Two people watch from a distance as the umbre Vieja volcano continues to erupt, from Tacande de Arriba, Spain, October 2, 2021 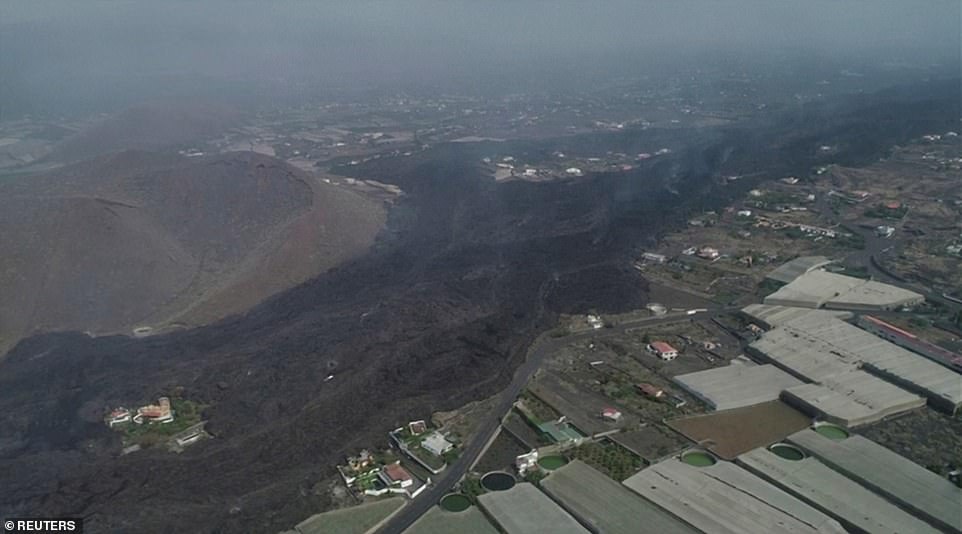 An aerial view of a lava trail surrounding the Cumbre Vieja volcano, as it made its way to the ocean, in this screen grab taken from drone footage, Spain October 1, 2021 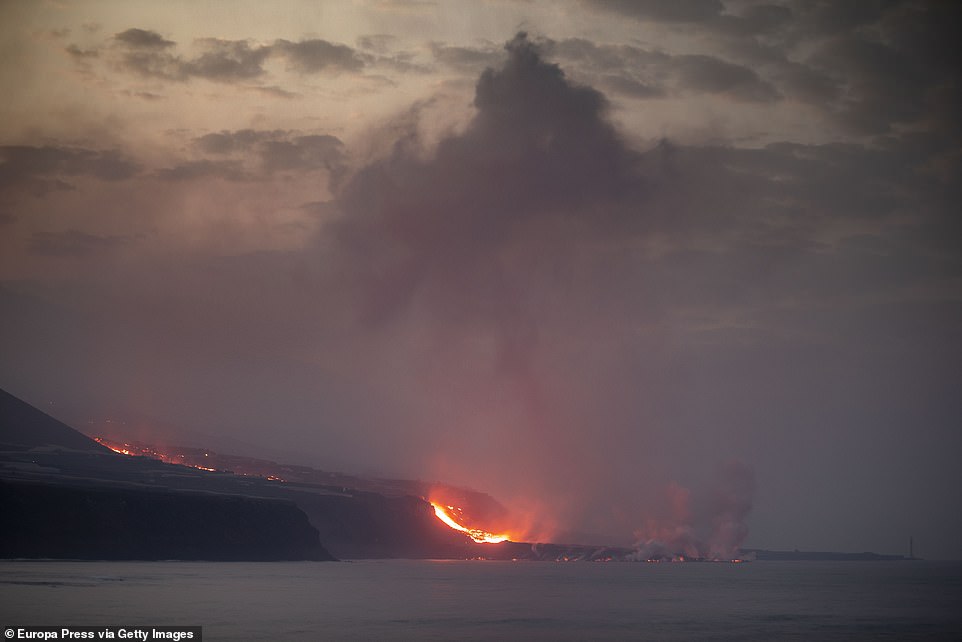 The Cumbre Vieja lava delta in the sea, from the port of Tazacorte, on October 1, 2021, in La Palma, Canary Islands, Spain 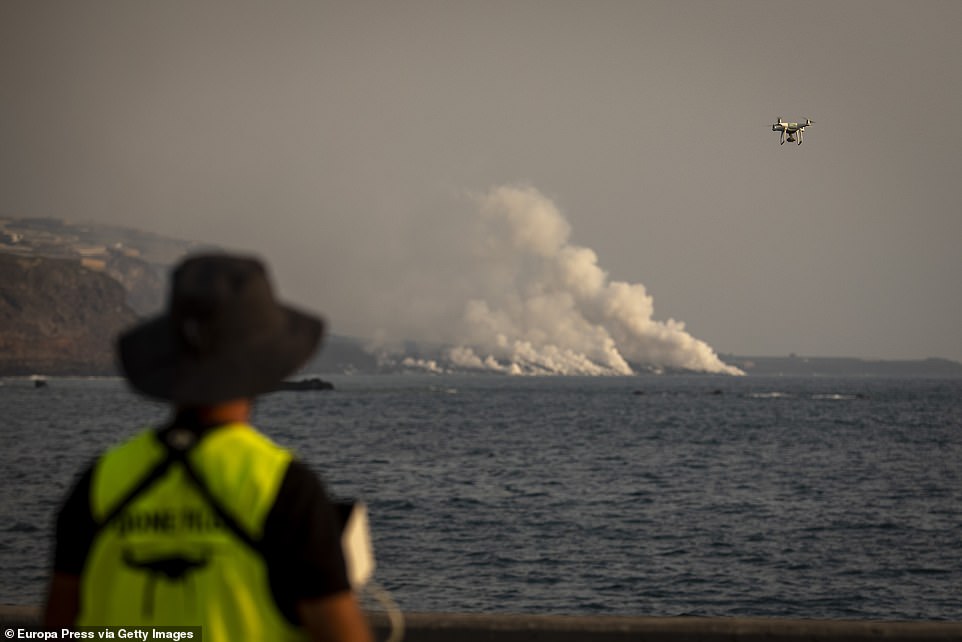 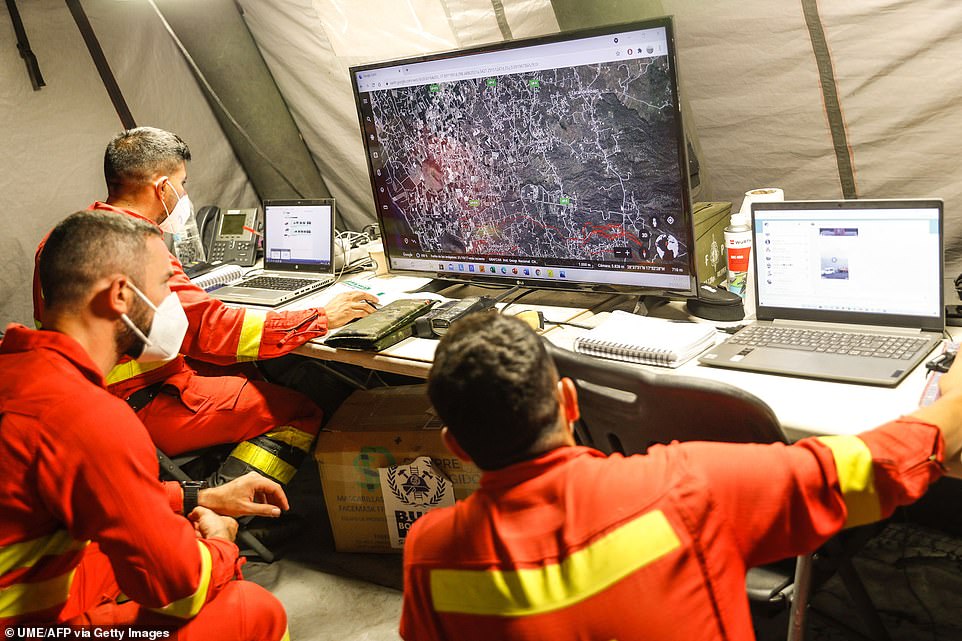 UME members monitoring on a computer screen the lava flow produced by the Cumbre Vieja volcano, in the northern area of the Canary island of La Palma on the night of October 1, 2021 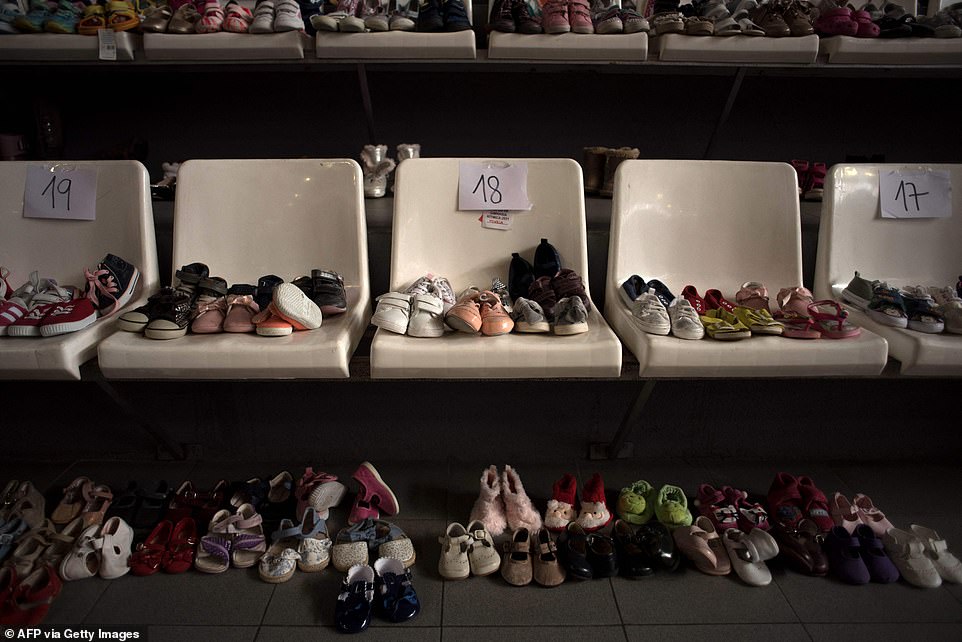 Shoes donated to assist people who lost their homes and belongings due to the volcano eruption in the Cumbre Vieja national park, are displayed on seats at Severo Rodriguez sports centre in Los Llanos de Aridane, on the Canary Island of La Palma in October 2, 2021

Sulphur dioxide levels in the area rose but did not represent a health threat, La Palma’s government said.

However, it advised local residents to stay indoors.

It also recommended that people on the island wear face masks and eye protection against heavy falls of volcanic ash.

The volcano has so far emitted some 80 million cubic meters of molten rock, scientists estimate, more than double the amount in the island’s last eruption, in 1971.

The lava has so far destroyed or partially destroyed more than 1,000 buildings, including homes and farming infrastructure, and entombed around 709 hectares.

La Palma, home to about 85,000 people who live mostly from fruit farming and tourism, is part of the volcanic Canary Islands, an archipelago off northwest Africa that is part of Spain’s territory.

The island is roughly 22 miles long and 12 miles wide at its broadest point.

Life has continued as usual on most of the island while the volcano is active. 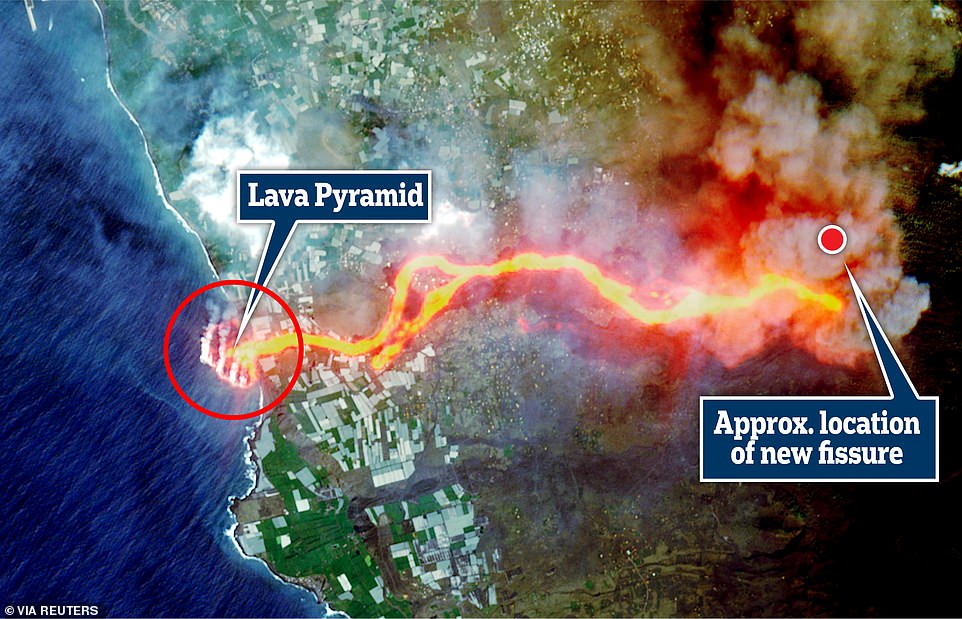 Satellite picture of lava flow following the eruption of a volcano on the island of La Palma, Spain September 30, 2021. The lava has created a 550 yard-wide pyramid as it has come into contact with the ocean and cooled. Fears were raised on Friday about more damage after a new fissure opened in the volcano on Thursday, around 1,300 feet north of the initial eruption site 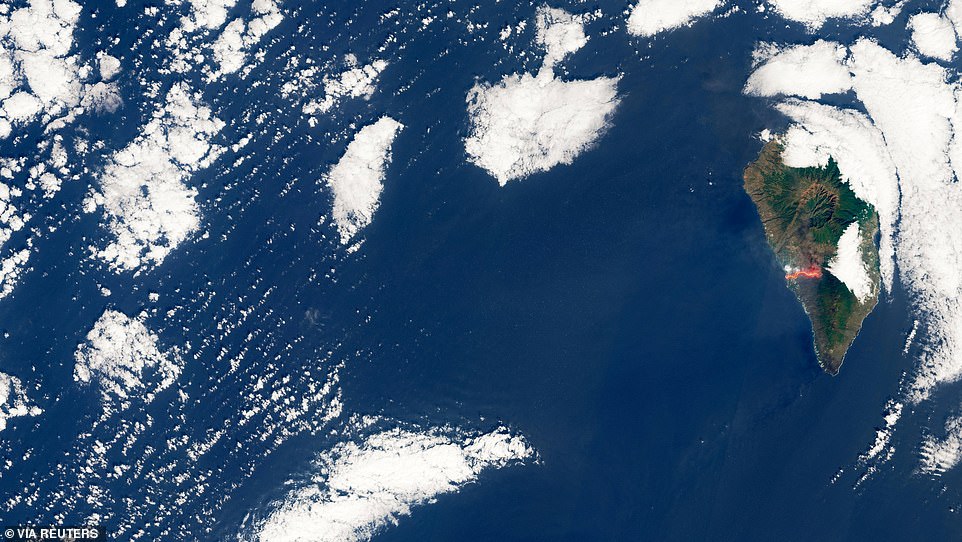 The Spanish Canary Island island to the north-west of Africa is continuing to expand (pictured in a satellite image) as the lava from the volcano hardens when it comes into contact with water, scientists have said 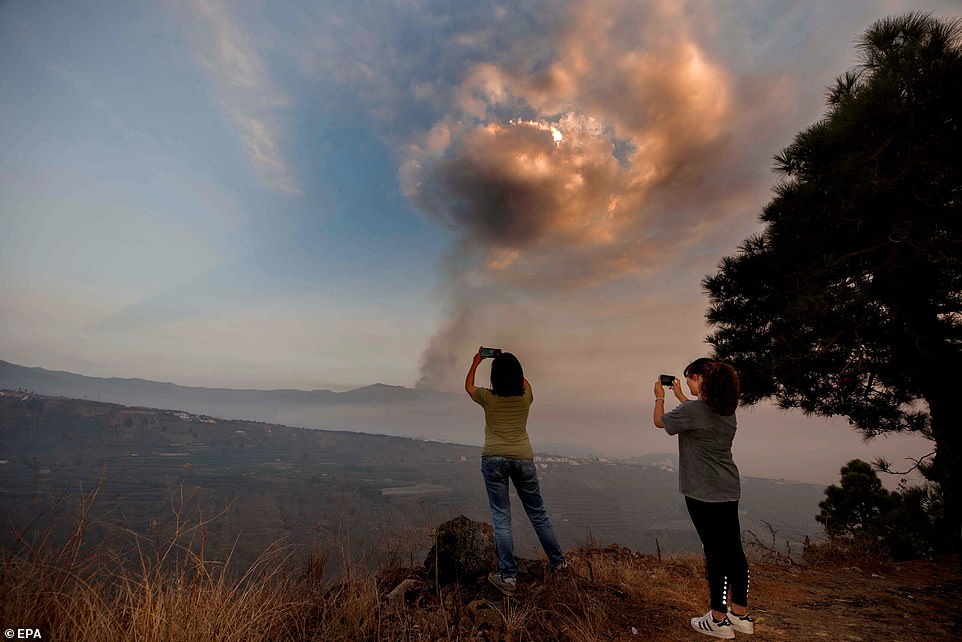 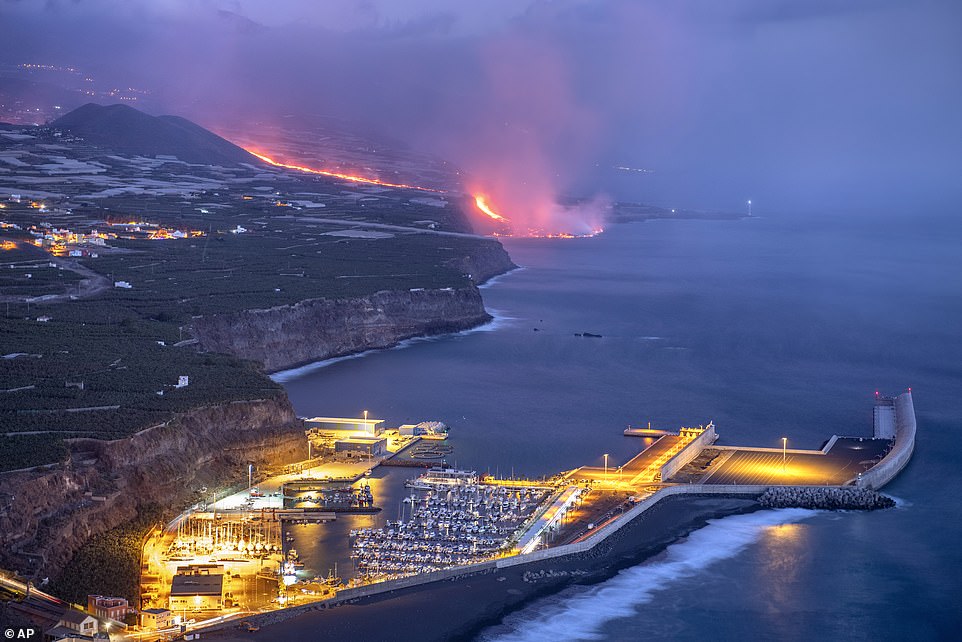 Lava from a volcano reaches the sea on the Canary island of La Palma, Spain, pictured on Wednesday September 29, 2021

Since erupting on September 19, lava flowing from the volcano has destroyed more than 800 buildings, as well as banana plantations, roads and other infrastructure.

After meandering downhill to the coast for nearly 10 days, the lava reached the ocean just before midnight on Tuesday, less than a mile west of Tazacorte.

On reaching the water, the lava cools rapidly, binding to the cliffside and enlarging the island’s territory and has created a rocky outcrop more than 546 yards wide.

Copernicus, the European Union’s Earth observation programme, said on Thursday that its satellite imagery showed a D-shaped tongue of molten rock building up on the island’s western shore measured 338 hectares (835 acres) by the end of Wednesday.

A river of red-hot lava snaked downhill from the new fissure, which burst open late on Thursday around 1,300 ft to the north of the primary eruption site.

Multiple vents have opened since the volcano began erupting on Sept. 19 but the Canaries Volcanology Institute described the latest opening as a new ‘focus of eruption’.

‘There is concern about the path of this new flow towards the sea, although it is expected to join up with the previous one within the next few hours,’ said the head of La Palma’s council, Mariano Hernandez Zapata on Friday.

He said more houses had been engulfed by lava overnight on Thursday.

‘We have more drama ahead, more people to take care of,’ he told a news conference. 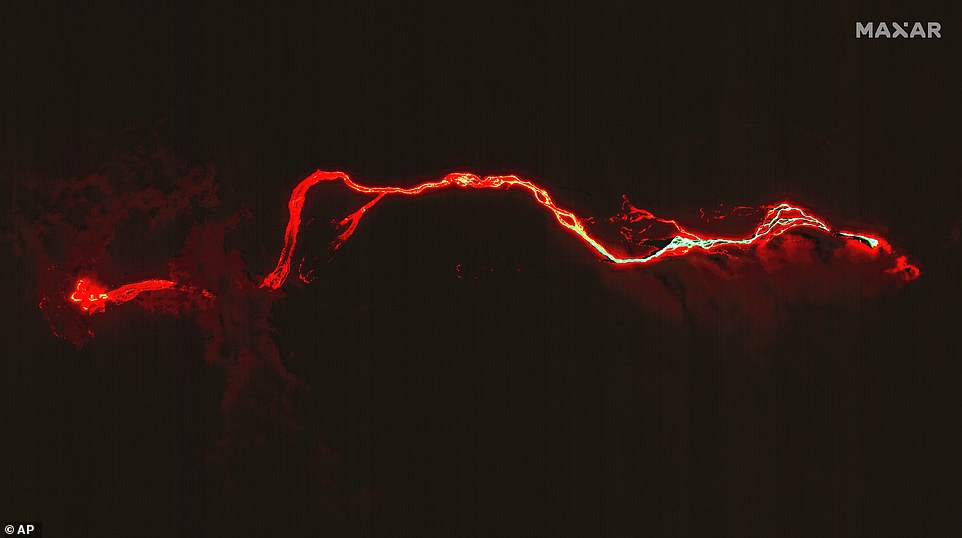 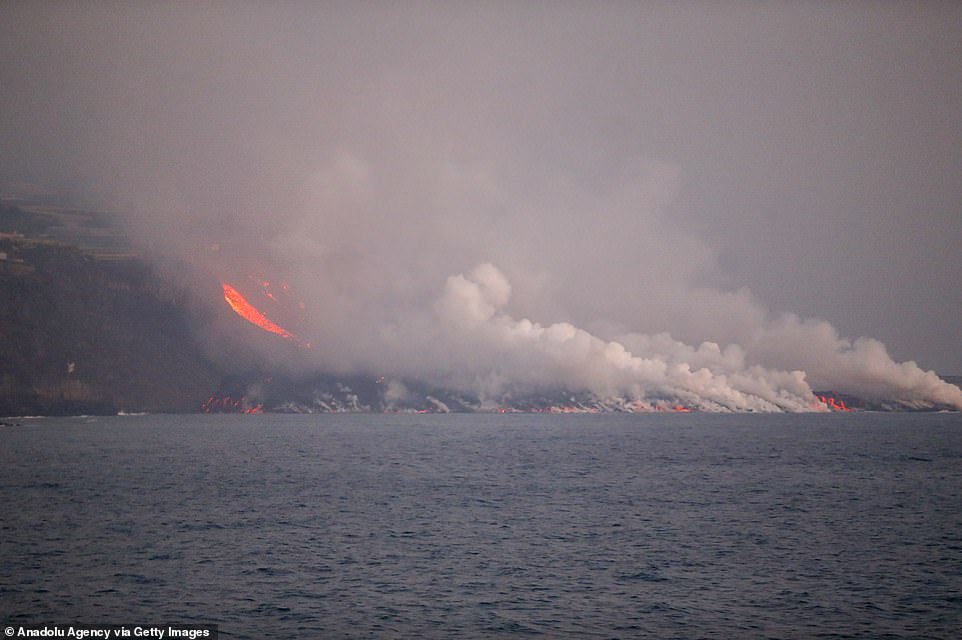 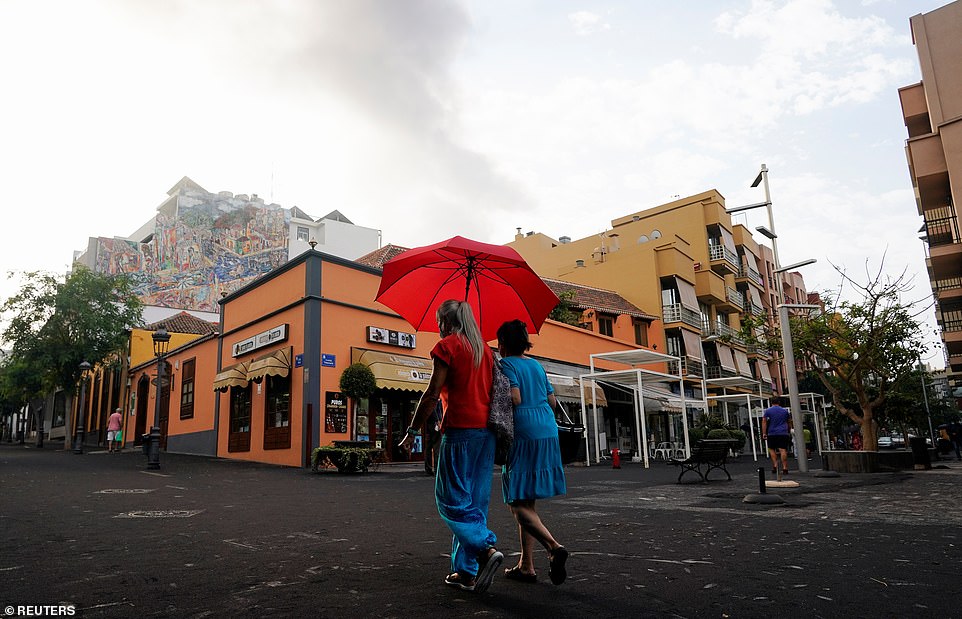 People walk with an umbrella to protect themselves from ask that covers the floor as smoke rises in the background following the eruption of a volcano on the Canary Island of La Palma, in Tazacorte, Spain, October 1, 2021

The volcano has thrown out 80 million cubic metres of molten rock, regional leader Angel Victor Torres said, doubling the amount expelled during La Palma’s last major eruption 50 years ago in half the time.

Residents of Los Llanos de Aridane, one of the worst affected towns, have taken to carrying umbrellas and wearing eye protection as a precaution against the volcanic dust blanketing the streets and floating in the air.

‘Last night the ash was irritating my eyes a lot, I had to use eye drops and my skin was stinging,’ said Matilde Gonzalez Tavarez, a 45-year-old nursing assistant visiting her mother at a care home in Los Llanos.

‘It’s helplessness, fear, insecurity. You don’t know what’s going to happen,’ she said, while street cleaners brushed away the carpet of black ash behind her.

Juan Antonio Perez Gonzalez, 56, who runs a floristry business in the town, fears the worst is yet to come.

‘I can’t put a good face on it or give you good news because this is a calamity,’ he told Reuters on Friday. He said many of the townspeople were preparing to pack up and leave.

Trade winds typical of Spain’s Canary Islands were helping dispel the plumes of water vapour and toxic gases that result when the lava, with a temperature of over 1,000C (1,800F), meets the ocean, where the water is 22C (71.6F).

But authorities were on alert as Spain’s weather forecaster, AEMET, indicated that the wind’s direction could change later on Thursday and bring the toxic plumes towards the shore and further inland.

The hydrochloric acid and tiny particles of volcanic glass released into the air can cause skin, eye and respiratory tract irritation. 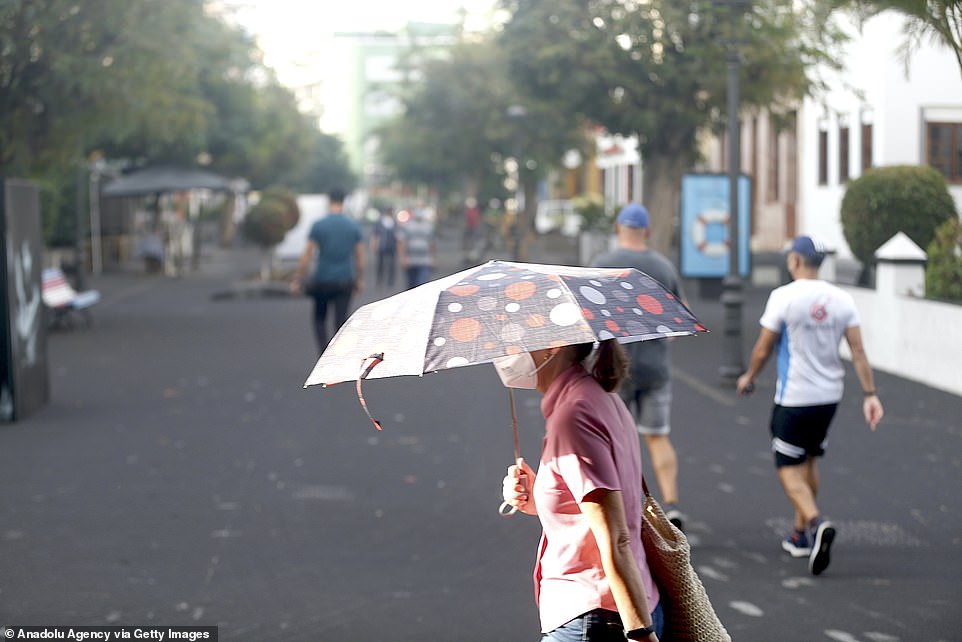 People use umbrellas to protect themselves from ash after eruption at Cumbre Vieja volcano in La Palma, Spain on October 01, 2021 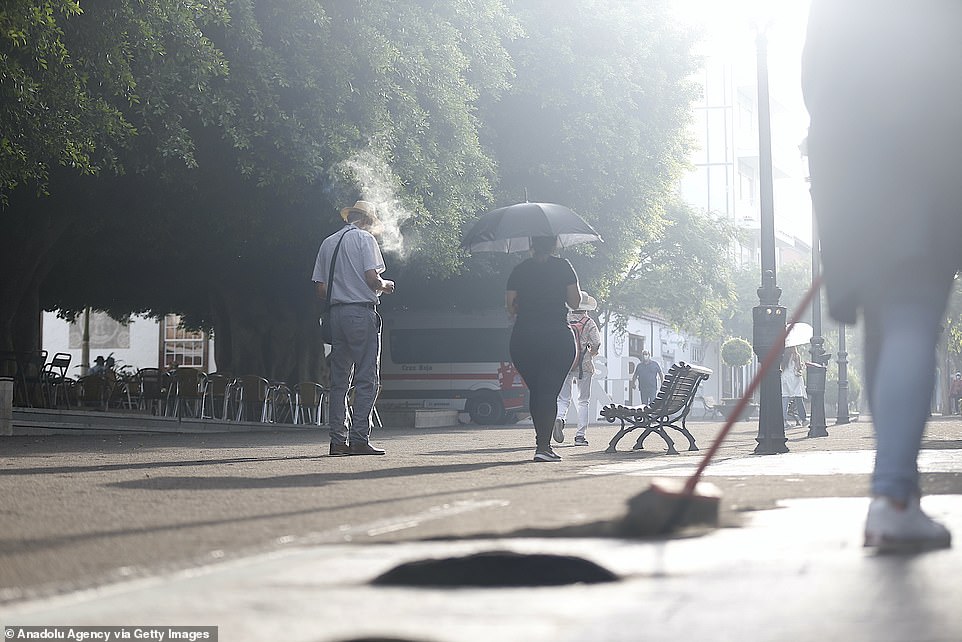 A woman uses an umbrella to protect herself from ash from the volcano as another sweeps ash on the pavement in La Palma, October 1, 2021 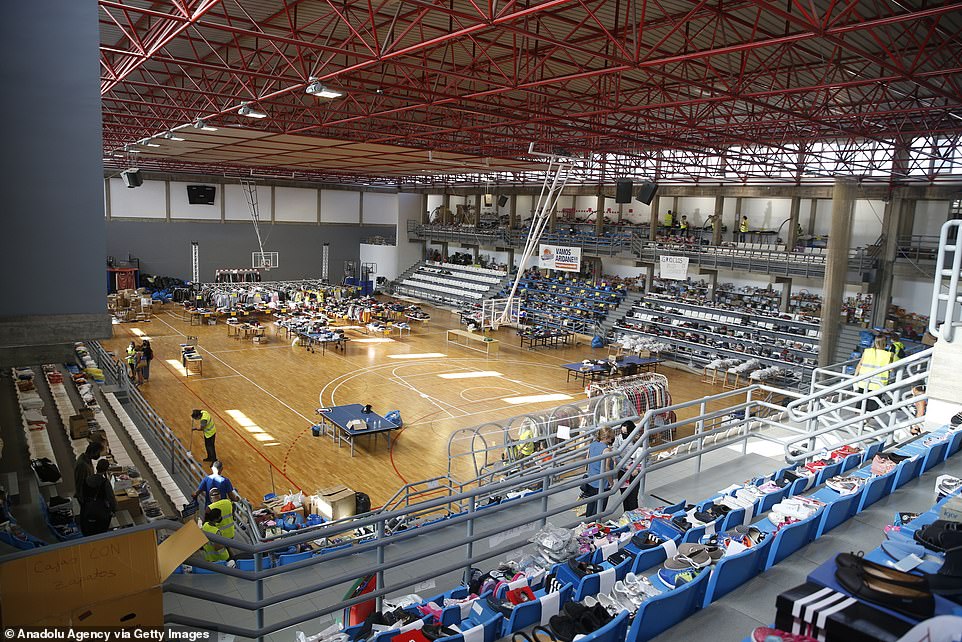 People who have left their homes due to eruption at Cumbre Vieja volcano take shelter in a gym in La Palma, Spain on October 01, 2021

The direction the lava flow could take was also a source of concern.

Molten fluid emanating from the volcano that first erupted on September 19 was still running downhill like a river and tumbling over a cliff into the Atlantic.

But uneven terrain could make the lava overflow its current path, spread to other areas, and destroy more houses and farmland.

At least 855 buildings and 19 miles (30km) of roads, as well as other key infrastructure, have been wiped out so far.

Banana plantations that are the source of income for many islanders have also been either destroyed or damaged by volcanic ash.

Residents of Spain’s La Palma were struggling on Thursday to come to terms with the devastation wrought by the Cumbre Vieja volcano, which has been ejecting a destructive cocktail of ash, smoke and lava for more than 10 days.

La Palma resident Carmen Rodriguez, who lost her home in the village of Todoque, was caught off guard by the advancing column of molten rock and was struggling on Thursday to come to terms with the devastation.

‘We never thought that the volcano was going to reach our house, never,’ she said, recalling how she rushed to salvage belongings during a last-minute evacuation before the lava engulfed her home.

‘There were so many people and difficulties, there was a queue. Thankfully we were able to take the washing machine, the fridge and a cooker that I recently bought.’

No casualties or injuries have been reported among La Palma residents since the eruption began.