Scientists may need to think twice when using artificial intelligence to help in the search for extraterrestrial life, a new study suggests.

A Spanish team used an AI system that interpreted the shape of a triangle outside a square from a NASA image of a crater on the dwarf planet Ceres.

Researchers then brought together 163 volunteers with no training in astronomy to describe what the saw on the image of the crater.

While the AI detected a both a square and a triangle, the majority of humans only interpreted a square.

But once the triangle was pointed out to the humans, the amount of people who said they could see it rose from 7 per cent to 56 per cent.

This suggests the influence of AI could be strong on the human brain when interpreting alien characteristics on other planets, even when it’s questionable they even exist.

Triangle or square, or both? Picture of the Vinalia Faculae region of Ceres obtained by NASA’s Dawn spacecraft on July 6, 2018 at an altitude of about 36 miles

‘Both people and artificial intelligence detected a square structure in the images, but the AI also identified a triangle,” said Gabriel G De la Torre, study author at the University of Cadiz, Spain.

‘Despite being fashionable and having a multitude of applications, artificial intelligence could confuse us and tell us that it has detected impossible or false things.’

This compromises the usefulness of AI in the search for extra-terrestrial technosignatures – discernible evidence of advanced technology by alien civilisations, De la Torre said.

‘We must be careful with its implementation and use in the search for extraterrestrial intelligence.’

De la Torre and his team of neuropsychologists were observing one of the bright spots on the surface of Ceres, called Vinalia Faculae.

The image of the bright spot, which lies on a crater called Occator, was obtained by NASA’s Dawn spacecraft in 2018 at an altitude of about 36 miles.

Although the largest object in the main asteroid belt, Ceres is a dwarf planet, 587 miles in diameter, between the orbits of Mars and Jupiter. 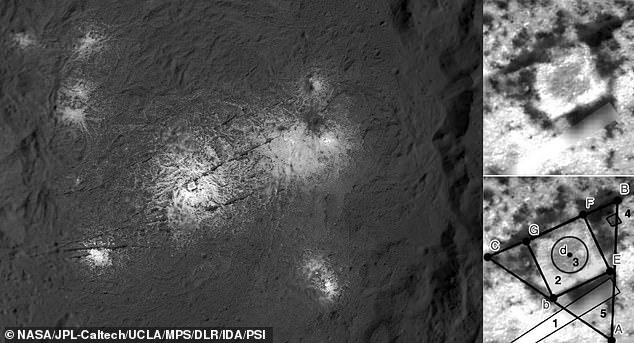 Another perspective of the Vinalia Faculae region (rotated 180º from that above), taken by the Dawn probe. Geometries that were most frequently detected by humans are indicated (bottom right)

The dwarf planet became famous in 2015 when bright spots were observed on Occator.

The mystery of the light source was solved when a NASA probe came close enough to discover that they originated from volcanic ice and salt emissions.

De la Torre said that what AI detected in Vinalia Faculae – both a triangle outside the square structure – is probably just a quirk of light and shadow.

The AI vision system had previously been trained with thousands of images of squares and triangles.

However, De la Torre did admit that AI could identify or interpret and extra-terrestrial features that go beyond human consciousness, ‘opening the doors to new realities for which we are not prepared’.

The experiment was a chance to explore how the search for technosignatures or space oddities might be influenced by our cognitive skills and consciousness.

‘We weren’t alone in this, some people seemed to discern a square shape in Vinalia Faculae, so we saw it as an opportunity to confront human intelligence with artificial intelligence in a cognitive task of visual perception, not just a routine task, but a challenging one with implications bearing on the search for extraterrestrial life, no longer based solely on radio waves,’ De la Torre said.

The results of the study have been published in Acta Astronautica.

‘Today, we live in the midst of a surge in the use of artificial intelligence in many scientific and technological applications, including the search for extraterrestrial intelligence,’ the research paper says.

‘However, human perception and decision-making is still the last part of the chain in any data analysis or interpretation of results or outcomes.’

WHAT IS THE DWARF PLANET CERES AND WHY IS NASA STUDYING IT?

It is the closest dwarf planet to the sun and is located in the asteroid belt, making it the only dwarf planet in the inner solar system.

While it is the smallest of the known dwarf planets, it is the largest object in the asteroid belt.

It lies less than three times as far as Earth from the sun – close enough to feel the warmth of the star, allowing ice to melt and reform.

Nasa’s Dawn spacecraft made its way to Ceres after leaving the asteroid Vesta in 2012.

There is high interest in the mission because Ceres is seen as being a record of the early solar system.