Aidan Turner was walking out of the costume department on the set of his latest show when the wardrobe designer saw he had one of those rollers for removing lint from your clothes in his bag and asked for it back.

The shame-faced actor had to admit it was actually his own.

‘I had to convince him I hadn’t pinched it, but it’s just that lint drives me crazy,’ says Aidan who, it’s fair to say, is full of surprises today.

‘It’s not a phobia but it’s definitely a thing. An ex-girlfriend introduced me to lint rollers and said, ‘They make your clothes look like new.’ That stayed with me, and while we’re no longer together, the lint roller hasn’t left my side since.’

What would Captain Ross Poldark, the swashbuckling hero who made him an international pin-up, make of this, you might wonder.

But Aidan readily admits he’s been struggling to maintain the order he’s used to since he had a child earlier this year with his wife, Succession actress Caitlin Fitzgerald (they married secretly in August 2020).

‘I’m forever tidying and cleaning up,’ he sighs. ‘But there’s so much stuff it makes no difference. It lasts five minutes and then the mess is everywhere again.’

Aidan Turner likes to mix things up, which is why he leapt at the chance to play the very unconventional protagonist Dr Joe O’Loughlin in ITV’s new thriller The Suspect, pictured

He’s constantly surprised us with his work too since he first came to our attention in dark vampire comedy Being Human.

He was young dwarf Kili in The Hobbit movies before Poldark catapulted him to fame, and he also played a tortured Leonardo Da Vinci in TV series Leonardo and a mysterious mercenary in the Agatha Christie adaptation And Then There Were None.

He likes to mix things up, which is why he leapt at the chance to play the very unconventional protagonist Dr Joe O’Loughlin in ITV’s new thriller The Suspect, created by the team behind Line Of Duty and Vigil.

‘The success of a show like Poldark is a double-edged sword,’ he says. ‘You want to be in a hit show – you certainly don’t want to be in something nobody watches. But then all the offers you get are for period dramas. There’ll be lots of offers for the same sort of thing. It happened after Being Human, I kept getting offered vampire parts and I had to say, ‘You really don’t want me for this, I’ve done it.”

Before we chat at the launch of the new series, the big question doing the rounds is whether he’ll be getting his kit off as he famously did in that Poldark scything scene. 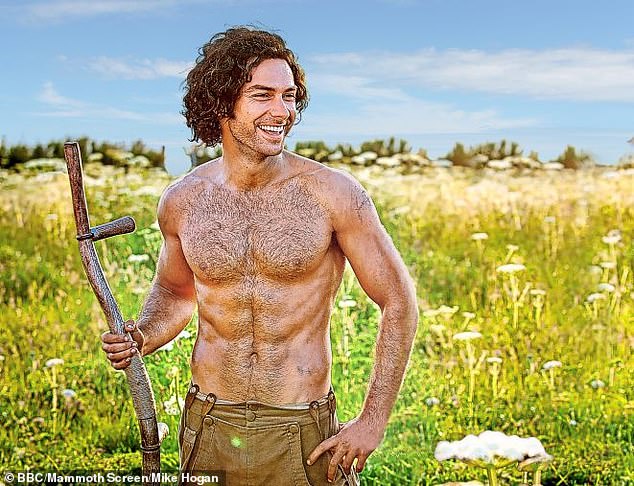 Turner says the success of Poldark is a double-edged sword because, although it was popular, it led to him receiving offers for similar period dramas. The actor became famous for his toned physique, pictured, so now thinks carefully before taking off his top

For the record, he’s fully dressed in The Suspect, although there are some raunchy moments. He admits his topless torso became such a talking point that when he was filming later series of Poldark he felt taking his shirt off again would appear gratuitous.

‘We had to be careful about some of the intimate scenes. I had to have stupid conversations where I’d say, ‘I don’t want to have to do this because it will detract from the scene, it’s going to look silly and it’s going to look like we’re doing it for a reason,’ he says.

‘I have a litmus test: if the nudity might make people laugh, then it’s not right and I won’t do it. But if it’s right for the role, then yes, of course. My top remains on in this show because it wasn’t the right choice to take it off.’

His character Joe, a clinical psychologist, is different to anything we’ve seen him do before. Initially he seems like the archetypal hero, and in the nail-biting first scene he comes to the rescue of a young man who’s threatening to jump from the top of a building, but things then start to unravel.

First we learn Joe has been diagnosed with Parkinson’s and suffers from tremors, which become apparent when he tries to help the potential jumper. Then he’s brought in to help with the case of a murdered young woman, but when a series of coincidences link him to her, he becomes a suspect. 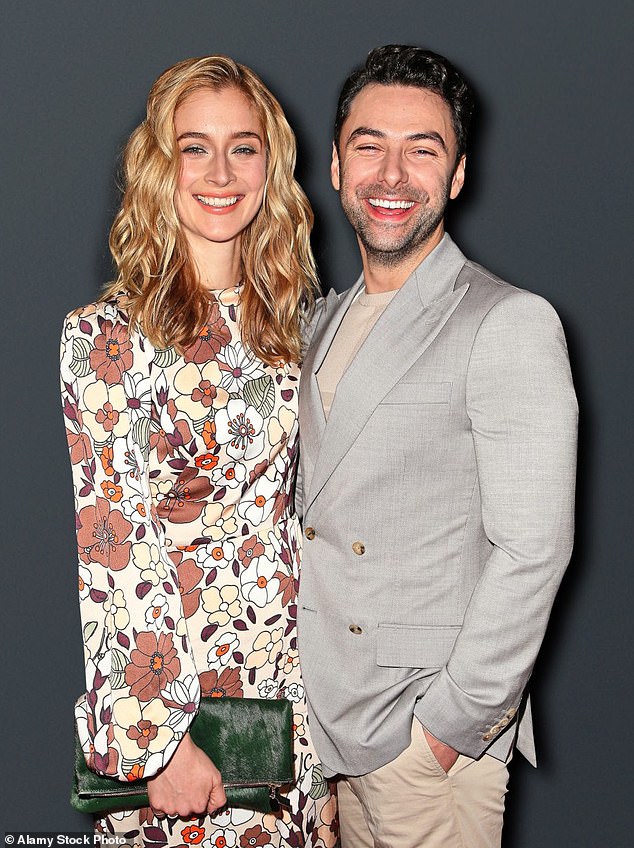 Aidan readily admits he’s been struggling to maintain the order he’s used to since he had a child earlier this year with his wife, Succession actress Caitlin Fitzgerald, pictured in 2019

‘But this isn’t like that. At first you think Joe’s a good person but then there’s a scene where he’s in the morgue with the dead woman and everything flips on its head. It’s seriously creepy. I don’t want to give too much away, but he makes some impulsive decisions which are surprising.’

As the series progresses our sympathies are pulled one way and then the other.

Initially we don’t know how culpable Joe is, and to maintain the tension director James Strong would often film two takes – one where Aidan plays Joe as an innocent man who doesn’t know what’s going on, and a second where he’s guilty and trying to get away with it.

Yet although the five-part thriller feels like something completely new, it still begins – as so many dramas do – with a murdered young woman.

The show acknowledges this, when investigating officer DI Ruiz (Shaun Parkes) says, ‘I don’t have the words for it any more’ to his colleague Riya Devi (Anjli Mohindra).

That scene was filmed soon after the real-life murder of teacher Sabina Nessa, and the cast and crew were acutely aware that while shows such as this are often criticised for featuring women murdered by strangers, the truth is that they too often are in real life.

The writer Peter Berry, who adapted the bestselling novel by Michael Robotham on which the series is based, says he pondered how to address this fact for days.

‘I realised I didn’t have the words any more, so that’s why I gave that line to the character,’ he explains. ‘There’s so much hopelessness with this situation.’

Much care also went into portraying Parkinson’s accurately, and the charity Parkinson’s UK advised on scripts. Aidan, 39, also spent time with former musician Drew Hallam who, like Joe, has young-onset Parkinson’s, and was diagnosed at 35.

‘One of his problems is that there are no support groups for someone his age. He’s an amazing guy. We talked and talked, we met up a few times and he came on set. I think what upset me most was when he said, ‘I can’t trust myself to hold my child.’ I can’t imagine what that must be like for him, and it was important for us to get this right.’

The show is set in London and, unusually, was filmed entirely in the capital.

‘So many shows give you a tourist version of London with Big Ben in the background, but we wanted to root it in real London geography,’ says James.

‘So Joe lives in Kentish Town, works in Paddington and his friend lives in a swanky flat in King’s Cross.’

For Aidan, who was born in Dublin, it was a joy to work in the city he now calls home.

‘I never get to film in London, so it was great to go home at night to my own house and sleep in my own bed,’ he says. ‘Now I have a family it would be difficult to say, ‘I’m going to the other side of the world to film for six months.’

Thanks to a bushy beard grown during lockdown, Aidan is almost unrecognisable in the series. The beard also has the added bonus of being a disguise at the supermarket, something he only noticed when he shaved it off for his next role in an Amazon drama called Fifteen-Love, in which he plays a tennis coach accused of abusing his protégée.

‘Zero people recognise me with the beard and I got really used to that,’ he says.

‘When I shaved it off I had this feeling the temperature had changed.

Me as the next Bond? No, I can still get on the Tube and go to pubs, and I don’t want that to change

There was movement in my peripheral vision and then people would come up for a selfie. It was the first time I’d had that in 18 months.

‘It’s funny because often they’ll ask for a selfie and then say, ‘It’s not for me, it’s for my mum’, which is a bit odd. Occasionally people will go a bit further and say, ‘I’m not a fan myself’, which is slightly insulting, but generally people are lovely.’

The idea of becoming any more famous frightens him a little though, and while he’s been touted as the next Bond, he says he’s not sure he’d want it.

‘It’s weird how my name keeps coming up as I’ve never had a meeting with them,’ he reveals.

‘I’m really happy with how my career’s going and something like that would change your life. It would be impossible to maintain any anonymity.

‘At the moment I can still get on the Tube and go to pubs and there’s never a problem. I don’t think I’d want that to change. I wouldn’t want it to become a nightmare for my family. It would be an interesting phone call to get, but I feel blessed with the jobs I’ve had. Plus, if you took on Bond you’d have to be a big fan of the movies, and I don’t know if I am!’

The Suspect begins on Monday 29 August at 9pm on ITV.