Beach-goers had to be crammed together to make room for air ambulances to land at Durdle Door in Dorset after three people injured themselves jumping off cliffs into the sea.

The four unidentified jumpers vaulted from the top of the ancient limestone arch, which reaches 200ft at its highest point.

Images from the scene show a mass of sun-seekers crammed into one area, near the only available exit, to vacate the area as the air ambulance lands. 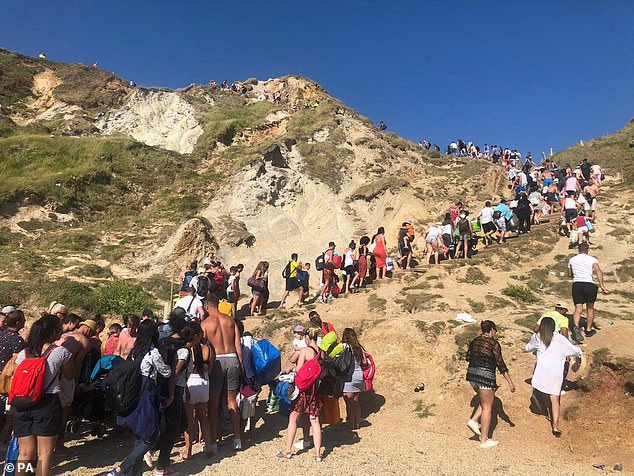 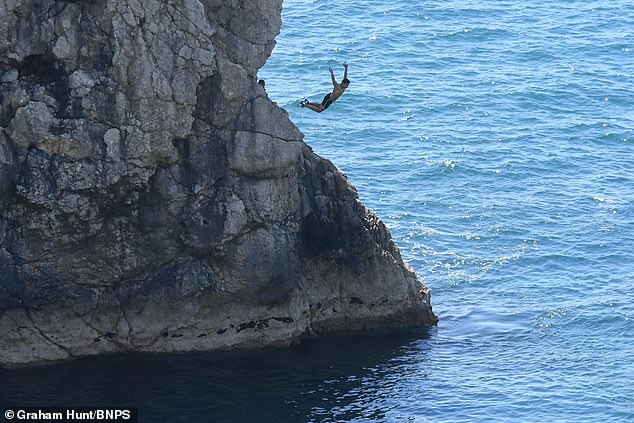 Despite initially claiming that only three people were hurt jumping off the famous archway, it has now emerged that figure is one higher.

Pictures taken earlier on Saturday showed the beach busy as the public were reminded to practise social distancing in the good weather following the relaxation of coronavirus lockdown restrictions.

HM Coastguard and the RNLI are helping to clear the area after police were called at around 3.45pm.

Chief Inspector Claire Phillips, of Dorset Police, said: ‘We have had to close the beach at Durdle Door to allow air ambulances to land. As a result, we are evacuating the beach and the surrounding cliff area.

‘I am urging people to leave the area to enable emergency services to treat the injured people.’

Piers Morgan called the scenes at Durdle Door ‘Total insanity’ while other social media users criticised the government’s early relaxation of lockdown, calling it a ‘sham’.

Another Twitter user wrote: ‘People are absolute morons. Some of these people will be sending their kids to school on Monday to be taught by my loved ones (or by me in 2 weeks). I am livid! This is what happens when you ease lockdown early.’

Piers Morgan called the scenes at Durdle Door ‘Total insanity’ while other social media users criticised the government’s early relaxation of lockdown, calling it a ‘sham’ 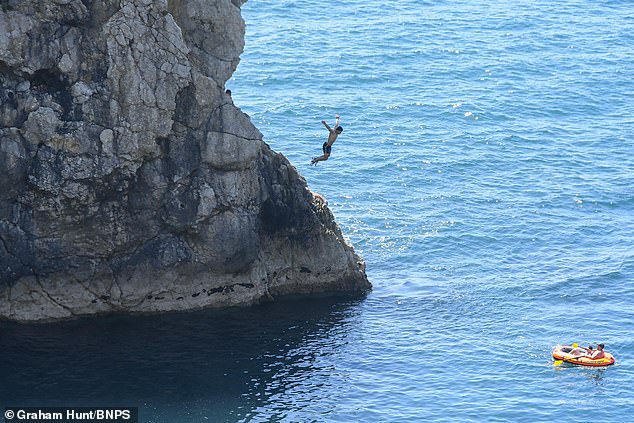 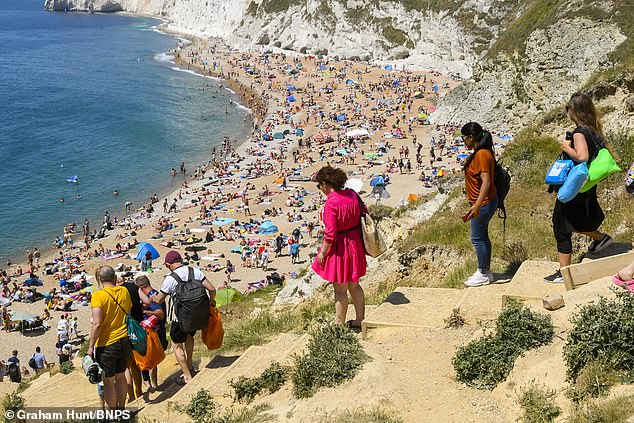 Until the helicopter landed this afternoon, people were largely seen complying with social distancing guidelines at Durdle Door, Dorset 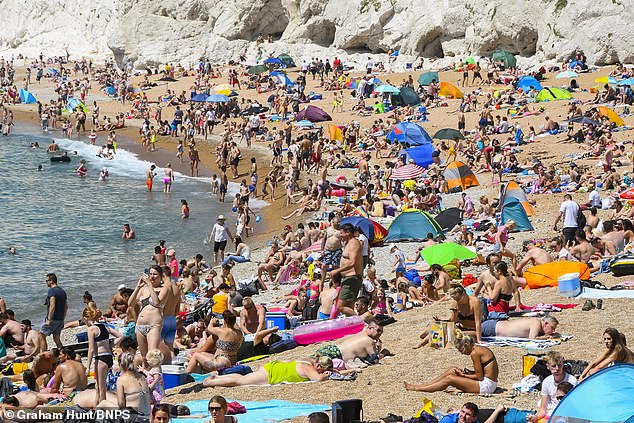 Sun-seekers jumped the gun on the next stage of lockdown easing and crowded on to the nation’s beaches today.

Restless Britons brushed aside warnings from police and scientists and were tempted outdoors by scorching temperatures, which climbed to highs of 82F (28C).

From Monday, groups of up to six people will be allowed to meet both in public spaces and in private gardens, where they can even enjoy barbecues.

But Boris Johnson’s preemptive announcement of the loosening last Thursday has already spurred a wave of revelry across the country.

Police chiefs have warned their officers face an uphill struggle to enforce the existing rules this weekend, but have attempted to stamp out mass flouting by threatening to impose fines.

The current lockdown allows the public to travel to beauty spots to sunbathe with members of their household, or to meet one person from another household at a two-metre distance. 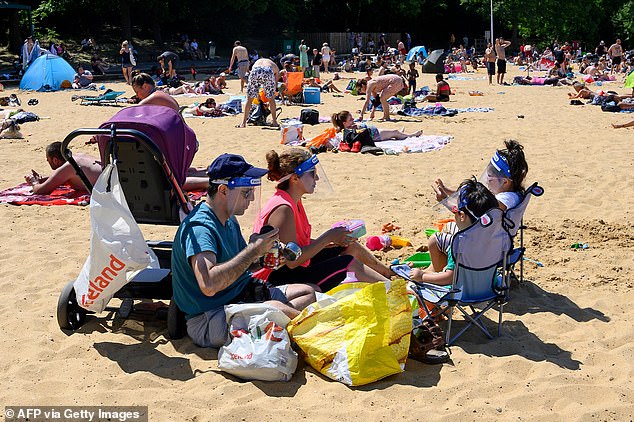 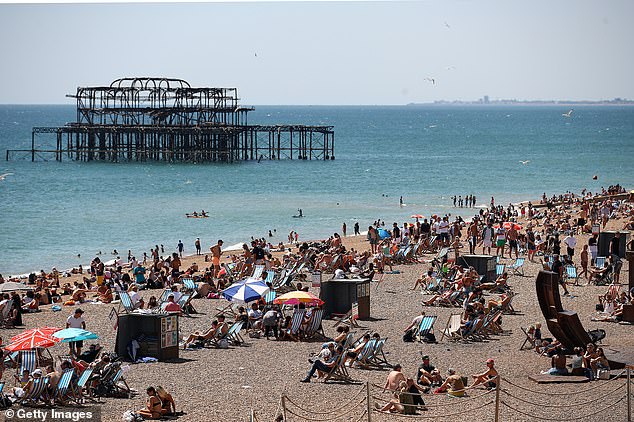 Scenes at bustling seaside hotspots, especially along the south coast (Brighton pictured), showed large groups sprawling on the sand and pitching up tents from early this morning 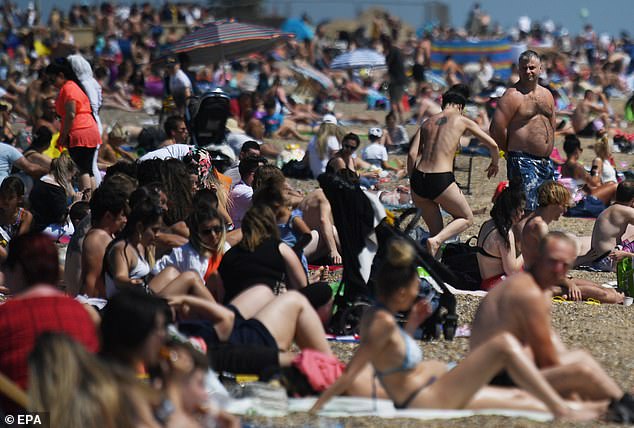 Yet scenes at bustling seaside hotspots, especially along the south coast, showed large groups sprawling on the sand and pitching up tents from early this morning.

Compliance with the curbs frayed further on the 68th day of lockdown as three of the nation’s top scientists – all on the government’s Sage panel of experts steering the crisis response – voiced concerns that restrictions were being lifted ‘too early’.

Prof Peter Horby this morning lined up behind Sir Jeremy Farrar and Prof John Edmunds to break ranks and caution that measures were being relaxed when the infection rate was still not low enough.