Boris Johnson has faced calls to open ‘air bridges’ to all of the EU at once because freedom of movement makes it impossible to stop tourists crossing borders.

The Government’s coronavirus committee, led by Michael Gove, will meet this afternoon to decide which countries will have the 14-day quarantine restrictions lifted.

The list will reportedly include ‘the main Mediterranean destinations’, with France, Spain, Italy and Greece all expected to make the cut. Other countries with low infection rates, such as Latvia, Slovakia and Croatia, could also be included.

But Portugal may not be added as there have been a spike in cases in the capital Lisbon. And Sweden is unlikely to be cleared because of concerns about high levels of infection.

Campaign groups have called for the whole of Europe to be opened up for British travel, because the Schengen open border area of the EU makes individual restrictions almost impossible to police.

Paul Charles, spokesman for the campaign group Quash Quarantine, which represents 400 of the biggest travel and hospitality businesses in Britain, told the Telegraph: ‘You are not going to be able to stop British people flying in to Madrid, driving over to Portugal and then going back via Madrid.

‘That’s why it needs a pan-European travel corridor.’

The British Prime Minister is due to give the green light to foreign holidays next Monday when the Government unveils its long-awaited travel corridor plan. Pictured, an employee wearing a protective mask walks on the beach of the Divani Apollon Palace hotel in Greece 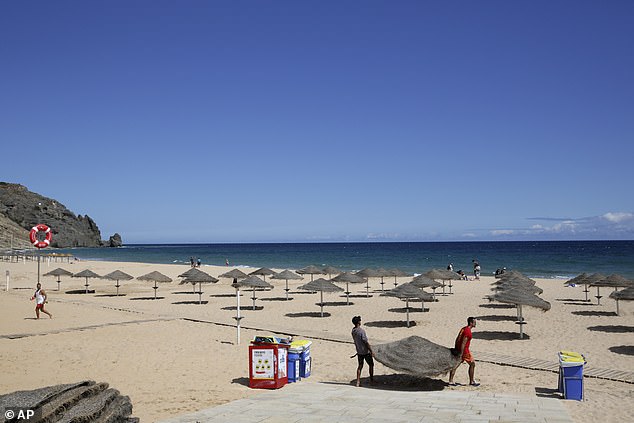 With Portugal supposedly left off the list, campaign groups have called for the whole of Europe to be opened up for British travel, The Telegraph reports. Pictured, two men set up sun umbrellas at the beach in Portugal’s Algarve coast on Thursday, June 4 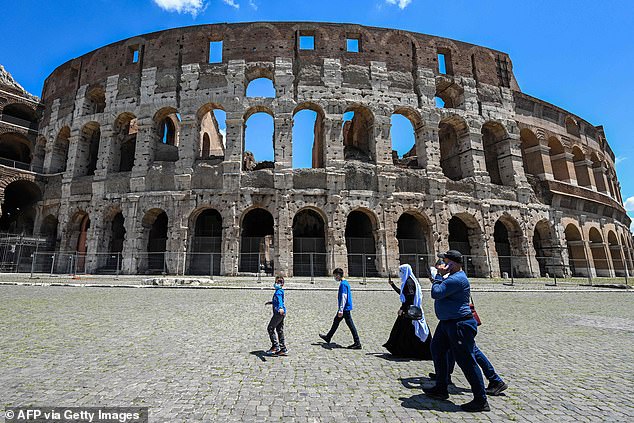 The Foreign Office is expected to ease advice next week which warns against ‘all but essential travel’, making it impossible for holidaymakers to get insurance. The new moves means travellers should be able to book holidays from July 4.

The controversial quarantine rule – where visitors entering the UK must self-isolate for 14 days – was introduced this month. But the scheme will be partially dismantled next week to allow travel corridors in which reciprocal agreements mean that travellers will not have to isolate at either end of their journey.

It comes as the Eiffel Tower reopened yesterday amid warnings from the World Health Organisation that Europe has seen a resurgence in coronavirus cases since countries began easing lockdowns.

Some 30 countries who have lifted restrictions have seen cases rise in the last fortnight.

Henry Smith, the Conservative chairman of the all-party Future of Aviation Group, welcomed the ‘first steps’ but pointed out most EU countries have had a similar if not better experience with coronavirus to the UK.

He said it was a mistake not to open the corridors to all EU countries. ‘I think that is the most straight forward and eloquent way to approach it,’ he added.

It comes after it was revealed medium-haul destinations such as Dubai will reportedly be available for Britons to explore from mid to late summer, with trips to Vietnam and Hong Kong on the horizon from late August or September.

Britons are also expected to get the green light to visit Canada, Morocco and the Caribbean from August.

Ministers are even on the verge of coming to a deal with Australia, as long as flights connect via low-risk countries such as Singapore. 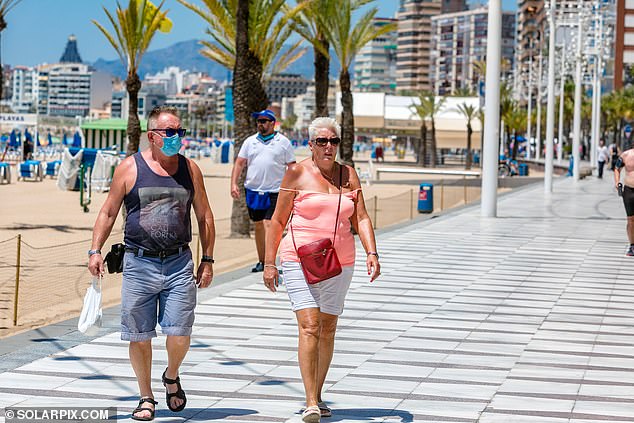 Britons began to arrive in Benidorm, Spain on Monday as coronavirus restrictions were eased amid the pandemic in Europe 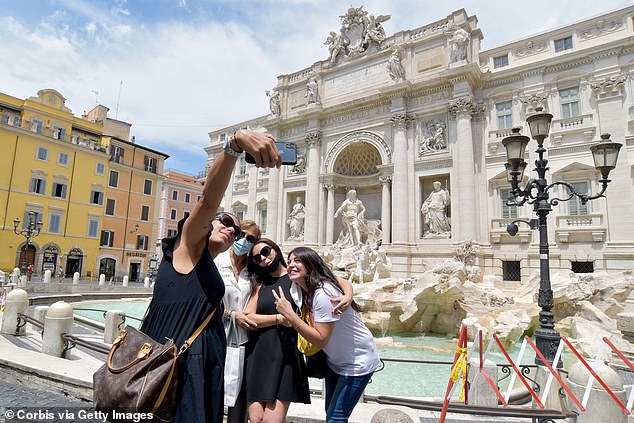 Tourists take selfies in front of Trevi Fountain in Rome, Italy on June 19 as travel restrictions were loosened after months of lockdown 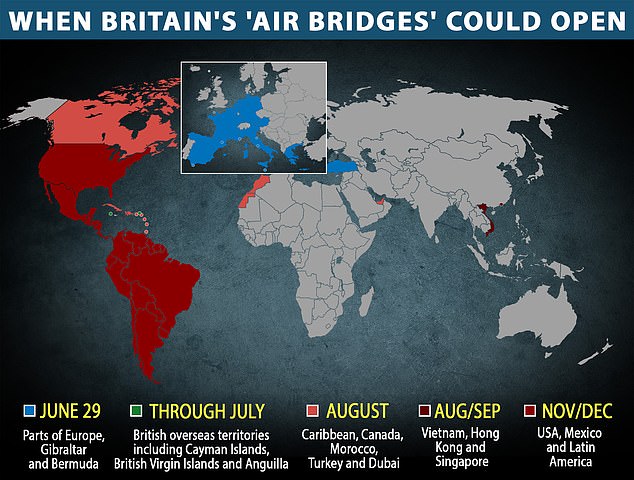 ‘Air bridges’ to France , Spain, Italy, Greece and Turkey have been all but confirmed, sources disclosed, with the first flights set to take off on July 4

Dozens more countries will be added in coming weeks, including important business destinations, but the initial announcement will be focused on popular holiday routes to give an instant shot in the arm to Britain’s crippled travel industry.

But Britons hoping to travel to the USA, Mexico and South American countries will likely have to wait until at least December, the Sun reported.

Mr Charles was reportedly assured by the Government that travel corridors will open as planned – subject to any coronavirus outbreaks.

He said ‘intensive’ phone calls are currently taking place across Europe to finalise the arrangements.

‘The first phase will be Europe, and the second phase from August will be more long haul, with the Caribbean, Dubai and Morocco included,’ he said.

‘South America, and Latin America will likely be exempt from the end of the year. There is no way restrictions will be lifted there any time soon as they are at the epicentre of the pandemic at the moment.

‘And it is unlikely that America will open up before the November election, partly because President Trump won’t open it up, but also because the number of cases there is very high.’ 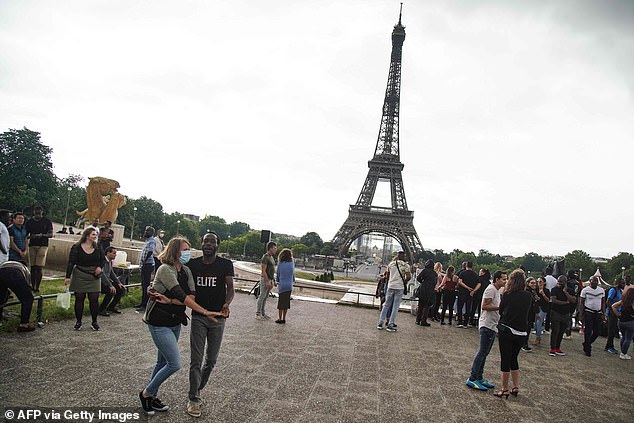 France (pictured, Paris on Sunday) is among around 10 countries expected to be included in Britain’s ‘air bridges’ to be announced on Monday 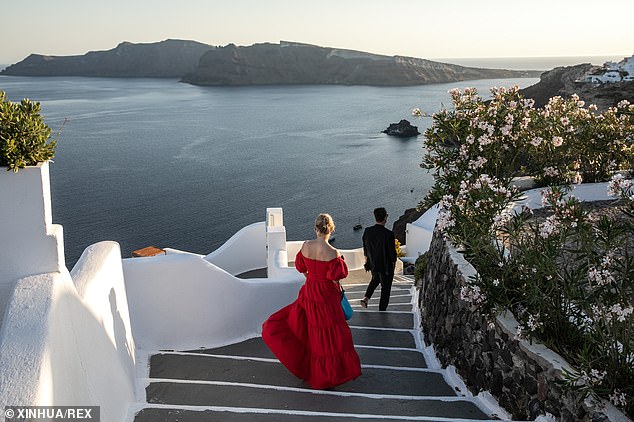 Greece (pictured, Oia on Santorini on June 14) is also among those expected to be announced by the Govenrment on Monday

At present, any traveller arriving in the UK – whether from Britain or a tourist – must quarantine for 14 days and provide their phone number and an address for self-isolation.

But some Britons have already ventured abroad after Spain lifted its ban on foreign tourists and opened its beaches in glorious 100 degree-plus heat earlier this month.

Travel firms also slashed the price of a one-week holiday to £300 as Downing Street signalled it could bring in these ‘travel corridors’ from July 4, with no 14-day quarantine on return to the UK.

The Foreign Office is expected to relax its warning against all but essential global travel for the first time since lockdown was imposed in mid-March.

Instead, the risk of Covid-19 will be set to low, medium or high depending on infection rates in individual countries.

The plans – to be announced on Monday – were finalised and signed off yesterday in a meeting with officials from Downing Street, the Department for Transport (DfT) and the Home and Foreign offices.

Airlines and airports were expecting to be briefed on the plans yesterday, giving them just over a week to prepare for the new holiday season.

Under the scheme, travel corridor nations are signing ‘memorandums of understanding’ with the Government, agreeing that whatever anti-coronavirus measures are taken in the UK must be mirrored by similarly stringent policies abroad.

Giving examples to the transport committee yesterday, Transport Secretary Grant Shapps said the other country having an equivalent to our test and trace system was important.

He also spoke of the need to consider the ‘level and trajectory’ of the virus abroad. 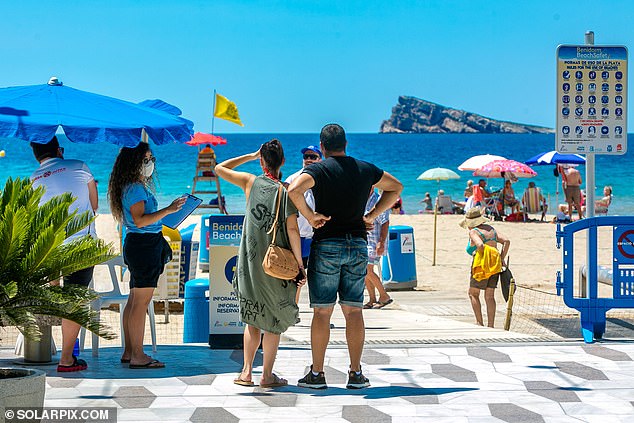 Boris Johnson will give the green light to foreign holidays next Monday when the Government unveils its long-awaited travel corridor plan (Pictured: Beaches in Benidorm, Spain) 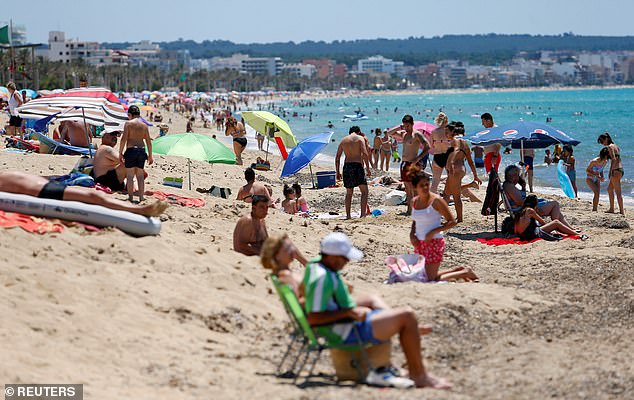 Outlining the questions being asked by UK officials, he said: ‘Do they have something equivalent to our NHS Test and Trace system? The Test and Trace system is enormous here now. We’ve got the capacity to test far more than is immediately required but that would allow for any uplift anywhere.

‘Does the country we’re talking to have that kind of capability?’

Mr Shapps added that introducing air bridges is a ‘massive priority’, stating: ‘I understand entirely the pain that aviation is going through. I know both for airports, for airlines and actually for ground handlers as well, this coronavirus has been a complete disaster.

‘The only thing which will be worse is if the country does not continue the work it’s doing on getting on top of it.

‘That’s why quarantine has been introduced at a point where we were getting on top of it. I know there’s a lot of arguments about what we should have been doing at the beginning.’

Travel corridors will come as welcome news to the beleaguered tourism industry, with holiday firms and airlines likely to launch big promotions for last-minute holidays as soon as the announcement is made.

Since June 8, all passengers – bar a handful of exemptions – have been required to go into self-isolation for 14 days when they arrive in the UK.

People who fail to comply can be fined £1,000 in England, and police are allowed to use ‘reasonable force’ to make sure they follow the rules.

On Monday, Matt Hancock used the press conference to reveal that details of the air bridges will be published shortly. 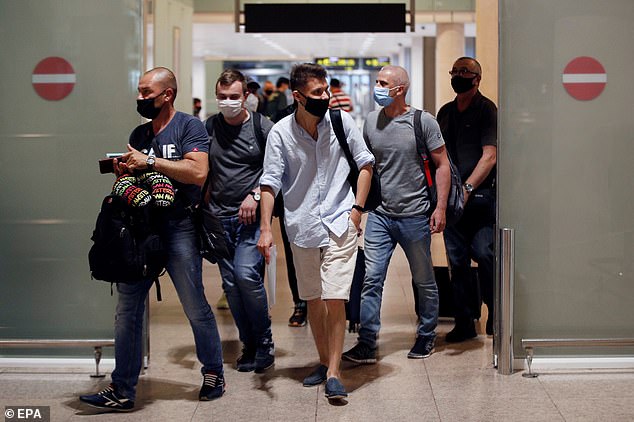 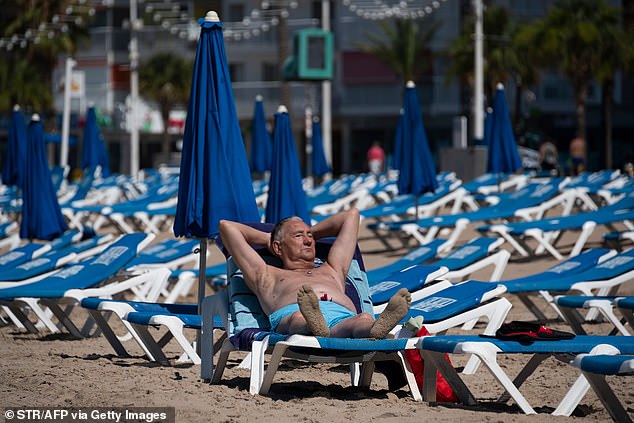 A man sunbathes in a designated roped-off area on Poniente Beach in Benidorm on June 21, as holidaymakers return to Spain

‘A lot of work is being done on travel corridors, I’ve been working on it over the weekend,’ he said.

‘And we have a formal review date of the quarantine policy at the end of this month on June 29, and we’ll make sure that in good time for that we publish what we plan to do next in terms of where we think – based on the epidemiological advice – we’re able to formalise travel corridors.

‘I know that people are really looking forward to getting this information, but we’ve got to make sure that we get it right and that work is going on right now.’

Ryanair has already seen a doubling of UK bookings for flights in July and August since the beginning of June, and price comparison site Travel Supermarket say demand for holidays to Spain has doubled over the past week compared to the week before.

This comes as more than 4,500 airport workers in the UK and Ireland face the axe after Britain’s biggest airport ground handling company announced plans to shed more than half its staff. Swissport yesterday announced job cuts as the pandemic has damaged the aviation industry.

The firm employs 8,500 workers at airports across the UK, including baggage handlers and check-in staff.