The Air Force failed six times to report information that could have prevented the ex-airman who shot dead 26 people Texas church last year from purchasing a gun, according to a government report released Friday.

That history culminated in Kelley’s November 2017 attack on the First Baptist Church in Sutherland Springs, the church his wife and mother-in-law attended.

The dead included several children, a pregnant woman and a 77-year-old grandfather.

Kelley served almost five years in the Air Force, during which he was court-martialed and sentenced to one year’s confinement for assaulting his wife and stepson.

He was able to purchase four firearms after being discharged in 2014, three of which he carried into the church.

The Air Force was blamed immediately after the shooting for not reporting the assault to the FBI because the conviction would have been a red flag in the mandatory background check when Kelley tried to purchase a gun. 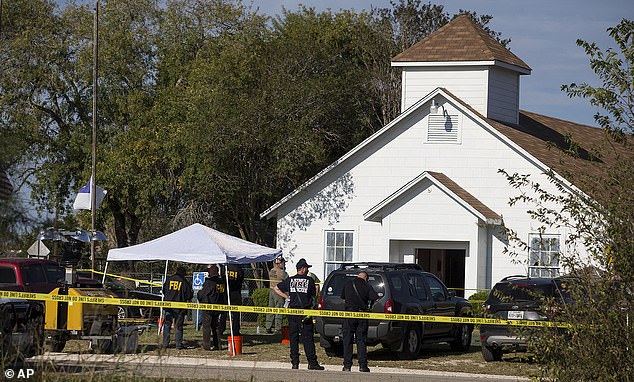 Kelley carried out the deadliest mass shooting in Texas state history at First Baptist Church in Sutherland Springs (above) on November 5, 2017. Three of the guns he used in the shooting were purchased after Kelley was convicted of assaulting his wife and stepson

Friday’s report says Air Force investigators who spoke to Kelley failed four separate times to fingerprint him and turn those prints over to the FBI.

The report also says the Air Force failed twice to submit its final report of the case to the FBI.

Air Force investigators were not trained to submit fingerprints or the final report to the FBI, the inspector general found.

The Air Force squadron that investigated the assault ‘used on-the-job training as its primary method of instruction for fingerprint collection and submission,’ the report says.

‘However, this training was insufficient and was not based on any established curriculum or policy requirements.’

The Air Force said in a statement Friday that ‘corrective action has already been taken.’

It has reviewed all case files since 1998, and ‘all criminal history reporting requirements that would preclude someone from purchasing a firearm have been updated.’ 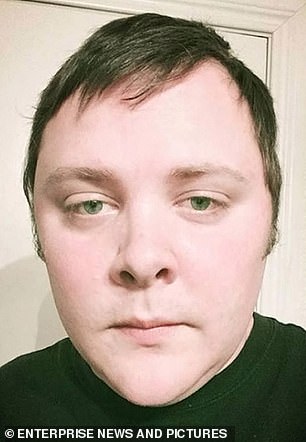 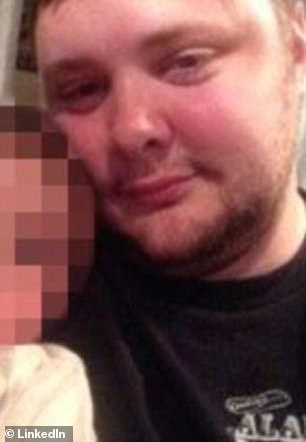 The Department of Defense inspector general’s report details Kelley’s decade-long history of violence, menacing of women and interest in guns 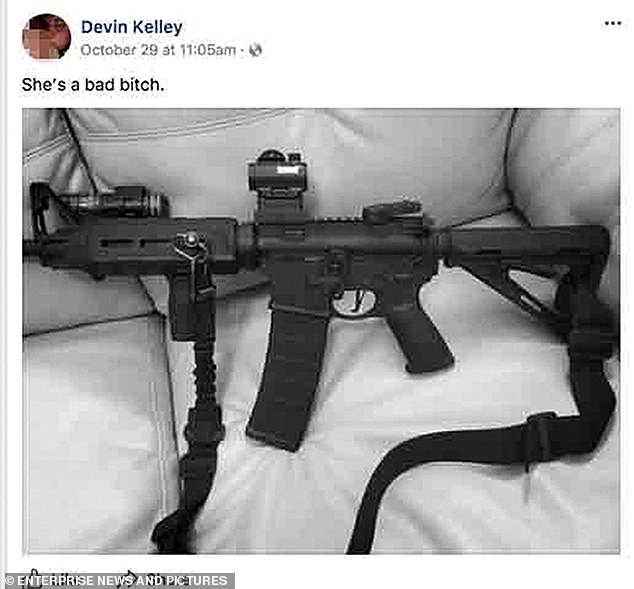 Gunmen in many American mass shootings have repeatedly been able to exploit loopholes or lapses in background checks.

Friday’s report also details some of the many warning signs against Kelley.

His first wife, Tessa Kelley, accused him of choking her multiple times and once holding her head under a showerhead and saying: ‘I’m going to waterboard you.’ Waterboarding is an interrogation technique that the United Nations says is considered torture.

After Air Force authorities opened an assault investigation against him, Kelley was ordered to be detained before trial because his commander believed he was ‘dangerous and likely to harm someone if released’.

Kelley had searched online for body armor and weapons, according to the report.

Kelley was later charged with misdemeanor animal cruelty after someone saw him punch a dog several times.

He was also investigated for sexual assault in his hometown of New Braunfels, Texas, but authorities didn’t pursue the investigation in what the local sheriff has since called ‘an error’.

The report also says Kelley was reprimanded in 2012 for using a ‘disparaging word’ against a female supervisor and then denying it.

Four years later, his former supervisor received a Facebook message from Kelley in which he used expletives and said: ‘You should have been put in the ground a long time ago. Better hope I don’t ever see you.’

The introduction section of the 138-page Department of Defense report is shown below: 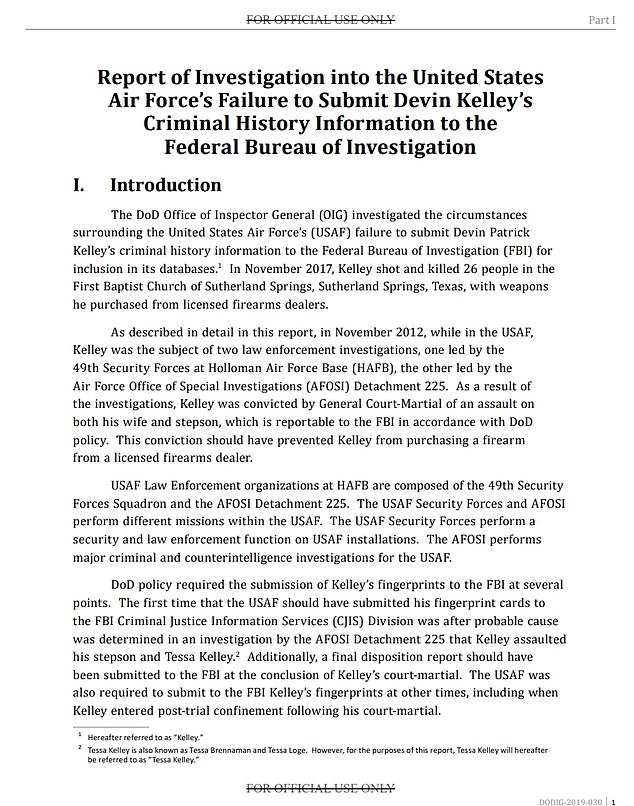 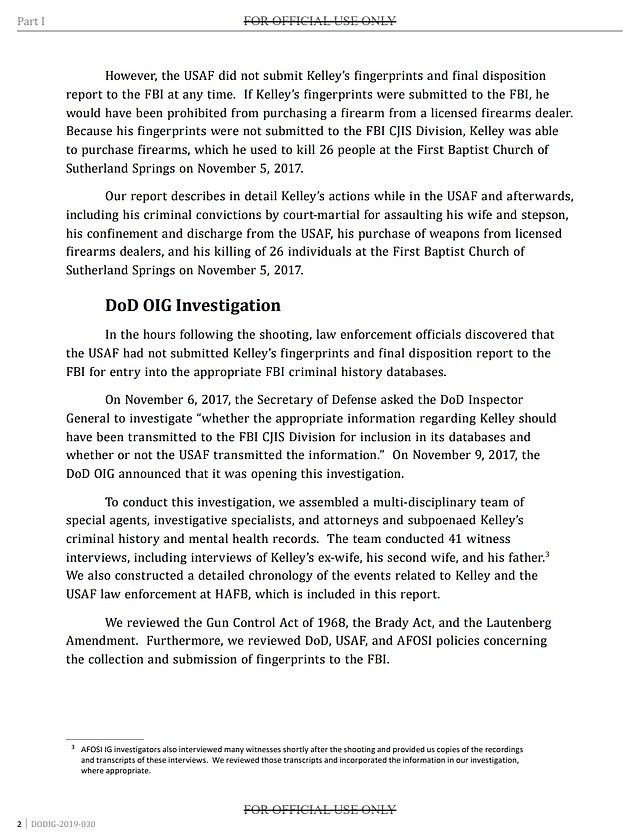 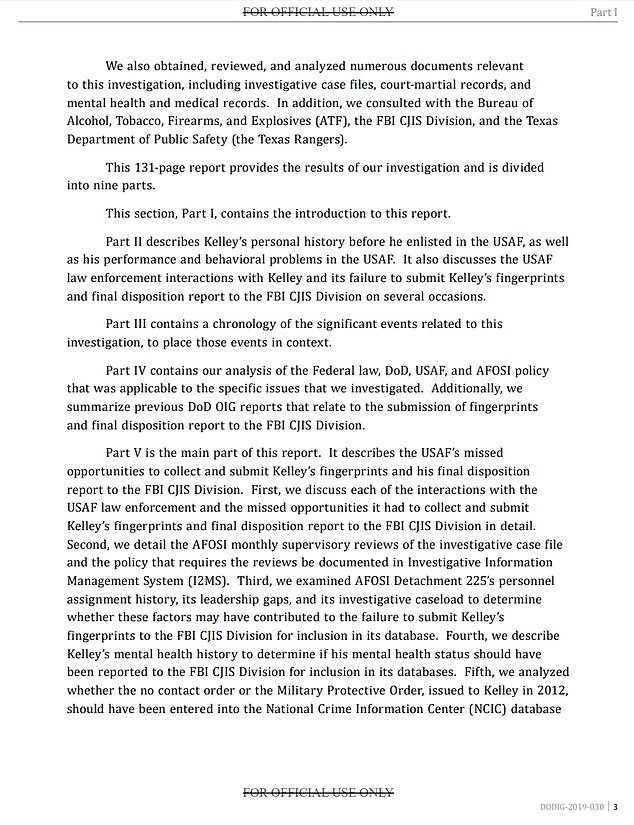 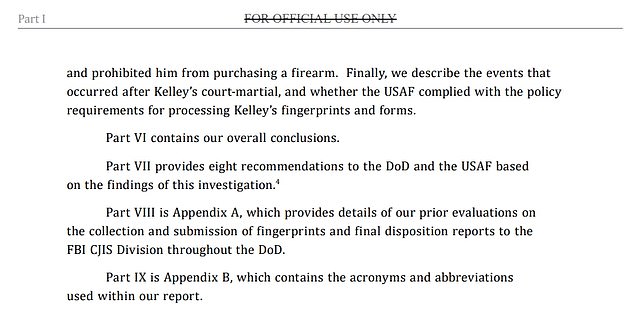 On November 5, 2017, Kelley shot and killed two people outside First Baptist Church before walking inside and killing 24 others, wounding 20 more.

While leaving the church Kelley was confronted by two local men who had heard the gunfire. They pursued Kelley in a 95mph car chase until he ran himself off the road and took his own life.

The autopsy released by the Travis County Medical Examiner’s Office said Kelley was shot in the back and thigh but his cause of death was suicide from a single gunshot wound above his right ear.

Investigators have said the attack appeared to stem from a domestic dispute Kelley was having with his mother-in-law, a member of the church who was not present that day.

One family that lost nine relatives during the mass shooting has sued the federal government, saying that even though Kelley was criminally convicted the military failed to enter the information into a database used to conduct background checks of gun buyers. 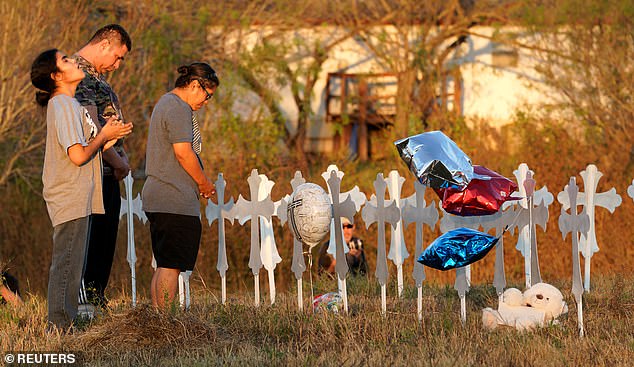 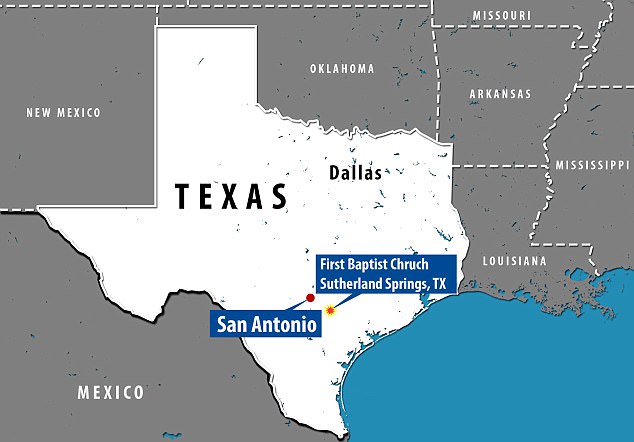 The shooting took place at the First Baptist Church, which is located about 30 miles from San Antonio.  Sutherland Springs is a community of about 400 people