By Aidan Wondracz and Peter Vincent For Daily Mail Australia

Air New Zealand has taken a swipe at Prince Harry after he claimed Meghan booked a flight that the airline says never existed.

The Duke of Sussex had claimed Meghan purchased a first-class ticket from Mexico to Britain for her father Thomas Markle, over concerns of media harassment.

On Thursday, Air New Zealand rebuffed the claim saying it has never operated flights between Mexico and the United Kingdom and does not offer a first-class service.

The airline followed up its response by taking a cheeky dig at the Sussexes on Friday.

The swipe has sparked mixed reactions online with some social media users unimpressed.

‘Bad form Air NZ. Someone in the social media team clearly isn’t a Harry fan and though the whole customer base would find this funny,’ one wrote.

A second added: ‘Note to you Air NZ, supporting and picking sides is not a smart idea.

‘Especially when the majority of the argument is around racism and treatment of people of colour.

‘Any spare seats?’ one wrote.

In his memoir, Harry wrote Meghan had bought the first-class ticket to bring her estranged father to the UK.

‘We told him, leave Mexico right now: A whole new level of harassment is about to rain down on you, so come to Britain. Now,’ an excerpt from Spare revealed. 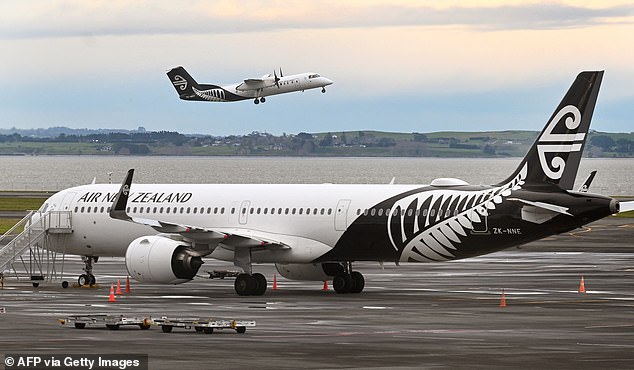 Air New Zealand promptly shut down the claim saying it did not offer first-class service.

‘We’ve never had flights between Mexico and the UK. And we only have Business Premier,’ an Air NZ spokesperson told the  New Zealand Herald.

The book reveals that the Sussexes rebuffed the late Queen’s suggestion that Meghan should fly to Mexico and try to salvage her relationship with her father.

Other questions of the bombshell memoir’s accuracy have been raised after eagle-eyed readers on social media found other inaccuracies.

In ‘Spare’, the duke writes of his ‘great-great-great-great-great-great grandfather’, King Henry VI who founded Eton College and died in 1471 – despite the fact Henry VI’s direct lineage ended after his son, Edward of Westminster, died as a childless teenager at the Battle of Tewkesbury.

Historians were quick to take to social media to question the accuracy of Harry’s link to Henry VI, the last of the Lancastrian dynasty.

Royal correspondent Patricia Treble pointed out the genealogical error and the fact Henry VI had no descendants after his son’s death in 1471.

Others pointed the blame for the Henry VI error at the memoir’s ghostwriter, award-winning American journalist and author J.R. Moehringer.