This is the terrifying moment a plane catches fire after a bird reportedly flew into one of its engines.

One of the horrified passengers filmed the shock incident, which took place soon after take-off from Panama City on January 31.

The footage was shot by Cesar Luciano and posted to his Instagram account, and shows flames leaping out from the side of the plane.

Video footage taken from inside the plane shows flames leaping out from the side, after a bird reportedly flew into one of the engines 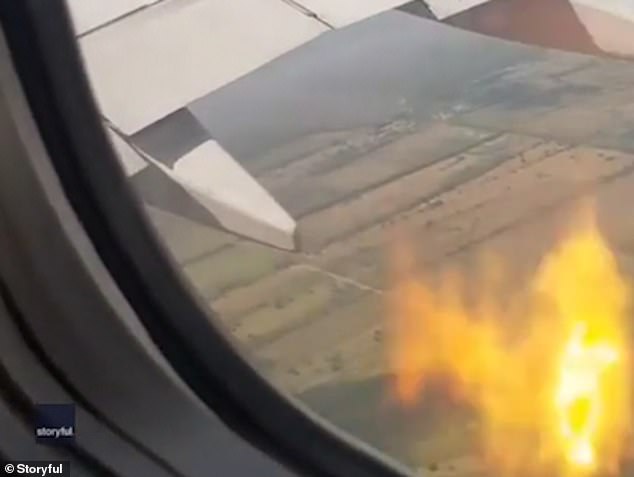 The flames appear as yellow flashed underneath the right hand side wing of the plane. It returned to Tocumen International Airport following the incident

Large yellow flashes appear next to his window as the plane flies over the Panama countryside – before screams are heard in the background.

Describing the traumatic ordeal, Mr Luciano said: ‘Never before have so many thoughts passed to me in such a short time. I thought that these things only happened in movies.

‘I do not want to tell you all the things that flowed through my mind during the event, but if there is something that was clear this was not my time.’

The plane returned to Tocumen International Airport after the pilot was alerted to the fire, and an investigation is now underway.

Local reports suggest that a bird flew into one of the plane’s engines, which caused the fire on the Copa Airlines flight.

A spokesman for the airline told Kienyke news that the captain ‘followed the established security protocols and landed without problem.’