People around the world are losing years of their lives to air pollution, a new report reveals.

A new study from the Energy Policy Institute at the University of Chicago (EPIC) found that pollution takes an average of 1.8 years of people’s lives around the globe.

The World Health Organization (WHO) released guidelines over a decade ago suggesting maximum ‘healthy’ levels of air pollution, but as of right now, almost every low- and middle-income country and half of high income ones are ‘unhealthy.’

The effects of pollution are most devastating in the most crowded cities in the most populous countries – India and China.

Americans, too, would live longer if the country complied with the World Health Organization’s pollution recommendations, but have managed to get back about a year and a half of lie expectancy thanks to clean air policies, the new report found.

Urban areas in the US have curbed their smog production, regaining an an average of 1.5 years of life expectancy back, a new University of Chicago report found

If you’ve ever visited a smoggy city – like New York City, Los Angeles or Beijing – then you’ve probably felt the effects of air pollution, even it you didn’t know it was the cause.

Tiny bits of matter floating around in the air make the air literally thicker, and irritate your lungs.

That, in turn, forces your heart to work harder to keep up. You might notice yourself getting short of breath after walking shorter distances, or even coughing or wheezing on particularly bad days.

Cities with significant industrial areas are particularly hard on asthma sufferers, young children, the elderly and those who have to be outside for extended periods of time.

If you go inside, or return to your home town you will likely recover quickly. But the effects add up – especially for city-dwellers who are constantly exposed to bad air.

Air pollution – and in particular, fine particulate matter that lodges itself in the lungs – damages your cells, keeps your lungs from taking in as much oxygen as they would otherwise be able to, and weakens the immune system’s ability to fight off infection.

The cumulative effect is a shorter life span – and we are only robbing ourselves of more years of life as time goes on and pollution keeps filling our skies. 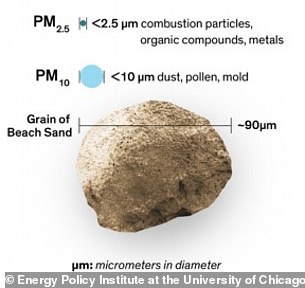 Fine particulate matter (PM) is many times smaller than a grain of sand, making it easy to inhale and get lodged in the lungs

Air pollution is thought to contribute to 6.7 percent of deaths in the world and is responsible for seven million annual deaths, according to WHO data.

Those early deaths drive down the global life expectancy, which has now fallen to 69 years for males and 71.1 years for females.

And air pollution is now doing more to drive down those numbers than just about any other public health concern – including smoking, alcohol and drugs, poor sanitation, road injuries, HIV/AIDS, malaria tuberculosis or conflict and terrorism, according to the new report.

That might level out if only we could get our levels of fine particulate matter down to the what the WHO has recommended, but doing so would take time, policies and finances that so far the world as a whole has struggled to commit.

The US, whose post-World War II industrial boom once made it a leading polluter, has actually made considerable progress since 1970, the new report found.

That year, that Clean Air Act created air quality standards that factories had to adhere to.

As a result, American air pollution was cut in half by 1980. Progress has continued, but slowed.

Globally, air pollution shaves off more years of people’s lives than any other major public health concern, including smoking, alcohol and drug use and wars

EPIC estimates that American’s are exposed to 60 percent less air pollution today than we were in 1970.

So even as the opioid epidemic is driving American life expectancy down, we have nearly eliminated the effect of particulate matter.

Nearly 40 years ago, pollution shortened American life spans by more than a year and a half. Now, it takes away just 0.1 years of life, EPIC’s report says.

On more local levels, the ‘smog capitol of the world,’ Los Angeles, has improved so much that its residents got back a year of life expectancy, New Yorkers and Chicagoans got two years back, and Washington, DC, area residents got almost three.

In total, the US has regained 325 million years of life thanks to improved air quality.

China, another titan of industry, was much slower to take up standards to restrict pollution.

But in 2013, a report revealed that people in the more polluted Northern part of China were dying five years earlier than their Southern counterparts.

A year later, the Chinese Premier declared ‘a war on pollution.’

With hundreds of billions of dollars of investment behind the effort, China aimed to reduce particulate matter by 10 percent by 2017.

By 2016, air pollution had been diminished by 12 percent, and Chinese citizens gained back 1.2 years of life. 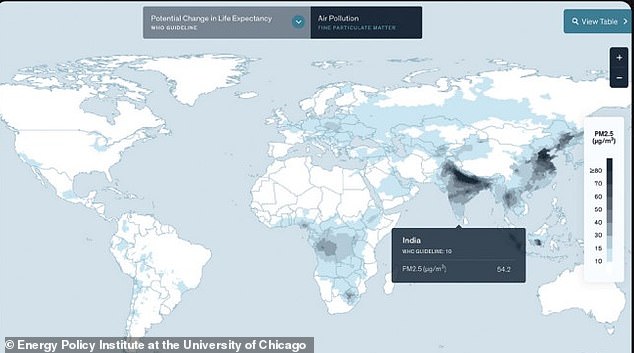 Southeast Asia has by far the highest concentration of PM 2.5 in its air, the new report shows

The EPIC report authors call this ‘winning its ‘War on Pollution.’

Despite this progress, China and India still see the greatest loss of expected years of life. Together, they account for about 73 percent of the world’s total years of life lost due to air pollution, according to the new report.

India faces the most dire air quality situation. There, meting the WHO’s guidelines on fine particulate matter would give citizens back 4.3 years of life.

Study co-author Dr Michael Greenstone believes that these tangible measures of pollution’s effects are crucial to getting policy changes made.

So with the new report he is introducing the ‘Air Quality Life Index’ to do just that.