A man has shared the ‘sinister’ and ‘bossy’ bathroom cleaning rules required by his Airbnb host.

Ian Hickton, from Stoke, was staying as a guest at the accommodation last weekend when he found a bizarre list of specific bathroom rules and shared them on Twitter.

The disgruntled bass player said: ‘Actual house rules from the Airbnb I stayed at last night. Is this where @LeagueOfGentlem got the inspiration for Harvey and Val?’

Ian Hickton, of Stoke, was staying as a guest at an Airbnb this weekend when he found the list

He was referring to the League of Gentlemen characters Harvey And Val Denton, who have a strange set of house rules designed to confuse guests to the point of madness.

The list started off with more reasonable requests before descending into pointers on how to use the ‘mandatory’ toilet brush, and how men should use the toilet.

‘Please try your best to use the washbasin without splashing the mirror,’ it begins, before the host suggests that ‘as a sign of courtesy’ to the next user, their chrome taps should be cleaned.

Many people have had to deal with a difficult housemate and so maybe the request to use a shower mat and squeegee to remove any water ‘clinging’ onto the glass shower door could be filed under reasonable. 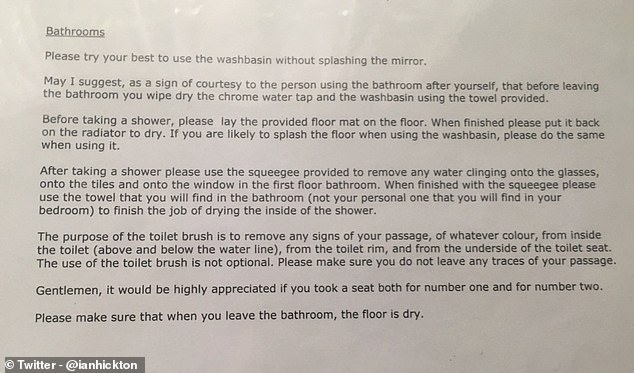 ‘Is this where @LeagueOfGentlem got the inspiration for Harvey and Val?’ asked Ian on Twitter

But then the requests begin to get more specific – and much less reasonable.

‘The use of the toilet brush is not optional,’ the rules state, elaborating that the purpose of the brush is to ‘remove any signs of your passage, of whatever colour, from inside the toilet (above and below the water line), from the toilet rim, and from the underside of the toilet seat’.

‘Gentlemen, it would be highly appreciated if you took a seat both for number one and for number two,’ the rules continue, before a reminder to make sure the bathroom floor is dry when guests exit.

The list was met with a lot of amusement from Twitter users, with one branding it ‘sinister’

Understandably the list was met with amusement from Twitter users, with one person branding the homeowner’s rules ‘sinister’.

‘”Do not leave any traces of your passage” how sinister is that?!’ asked Beth.

‘It would seem my mother is running an Airbnb. Those were the rules I had to live by as a child. Rebellion for me is not cleaning the door after a shower,’ added another user.

And one commented: ‘”The use of the toilet brush is not optional”. I wonder how violations are punished?’