NASA’s Perseverance mission launched today and will collect at least 20 rock samples from the surface of Mars.

But engineers have already set their eyes on how these samples, which will be stored on the Martian surface, will be returned to Earth.

The European Space Agency has revealed that Airbus-France will be in charge of building the Earth Return Orbiter (ERO) satellite, which will retrieve the samples.

It is believed that they will be delivered back to Earth in 2031.

Pictured, an artist’s impression of the Earth Return Orbiter (ERO) satellite which will be built by Airbus and bring back Perseverance’s rock samples back to Earth in 2031

The ERO, which will have a 137ft wingspan, will act like an interplanetary cargo ship, ferrying the samples from Martian orbit back to Earth for analysis.

Perseverance will land in February and set about collecting the rock samples.

These will be placed in specifically designed metal tubes and left on Mars.

They will then be collected by a future Mars lander which will be built by the European Space Agency (ESA) and will launch around 2026.

This so-called ‘fetch rover’ will pick up each canister containing the precious geological cargo and place them in a protective container.

The container full of rock dust will then be attached to the Mars Ascent Vehicle, or MAV, which will take-off from the surface and place the container into orbit around Mars.

After successfully reaching orbit around Mars, the precious canisters will be collected by the return orbiter, which will be built by Airbus. 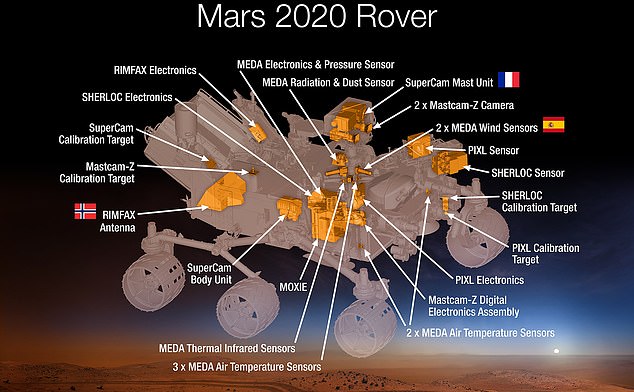 This craft will then make its way back to Earth and the samples will be placed in another protective case, to ensure the contents are not destroyed when entering Earth’s atmosphere.

Once the first Martian rock samples land on Earth – in an American desert – which is expected to happen in 2031, scientists will cut the slabs into thin sheets in order to determine if individual microbial cells are hiding in the samples.

Every step of this process is fraught with technological and engineering issues, which NASA and ESA will work together to overcome.

Speaking to BBC News, Dr David Parker, the director of human and robotic exploration at the ESA, said: ‘This is not just twice as difficult as any typical Mars mission; it’s twice squared – when you think about the complexity involved.

‘And this satellite that Airbus will build – I like to call it “the first interplanetary cargo ship”, because that’s what it will be doing. It’s designed to carry cargo between Mars and Earth.’

The Earth Return Orbiter (ERO) will be enormous in scale compared to previous missions.

Its 6.5 tonne bulk will be sent into space from Earth and will then be powered by ion propulsion systems which will receive energy from its vast solar panels.

The enormous machine will have to catch the container full of the rock samples – which is only about the size of a football – after it is fired into space from the Martian surface. 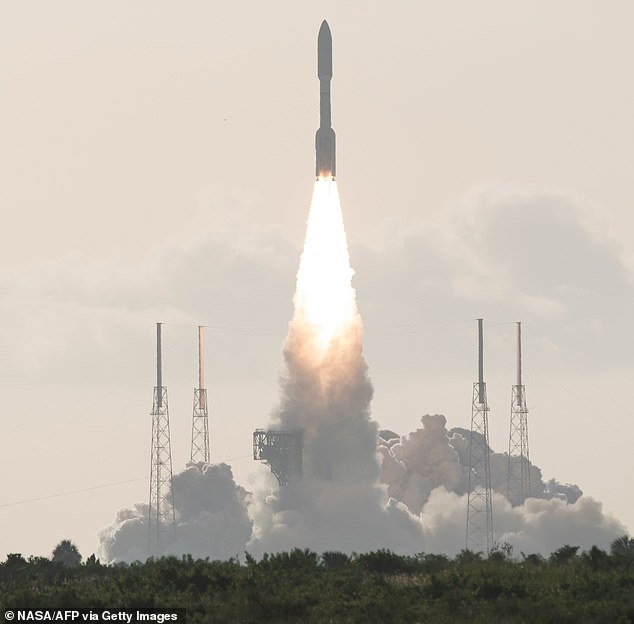 ‘People have talked about Mars Sample Return for years. I remember working on it myself as far back as 2002. But we’re now in the exciting situation where we’re about to do it. This dream is about to become a reality,’ Dr Parker said.

‘As a selected prime for the Mars Sample Return’s Earth Return Orbiter, we’re bringing the full force of our experience gained on Rosetta, Mars Express, Venus Express, Gaia, ATV, BepiColombo, and JUICE to ensure this mission succeeds. Bringing samples back to Earth from Mars will be an extraordinary feat, taking interplanetary science to a new level.’

The six-wheeled vehicle took flight atop a United Launch Alliance Atlas V rocket and is the same size as a large car.

It is also accompanied by an autonomous four pound (1.8kg) helicopter called Ingenuity which will study Mars’s atmosphere.