Thirsty airline passenger is left shocked when he asks for tap water but is given a cup of ice instead and told to ‘wait for it to melt’ (however, not everyone is on his side)

An airline passenger who asked for water during a flight delay claims he was given a glass of ice and told ‘wait for it to melt’.

Shocked Gene Goh was on board a Scoot flight that was waiting to take off from Changi Airport in Singapore en route to the city of Osaka in Japan.

As he was thirsty, he asked a flight attendant if he could have some ‘plain water’, but was told that only bottled water was available.

Airline passenger Gene Goh claims that when he asked for water on a delayed Scoot flight, he was given a cup of ice, pictured, and told to wait for it to melt

But Mr Goh was not prepared to pay for a bottle, so he asked for tap water.

The flight attendant gave him a cup full of ice, instead.

He then posted a picture of the glass of ice on Scoot’s Facebook page, complaining it was no way to care for passengers.

He wrote: ‘I was given a cup of ice and was told to wait for the ice to melt.

‘All I am asking is for just a cup of water, I wouldn’t care if it was from the tap.

‘I hope that there could be some sort of care for passengers, not being unreasonable over here.’

But if he was hoping for sympathy, Mr Goh was in for disappointment. 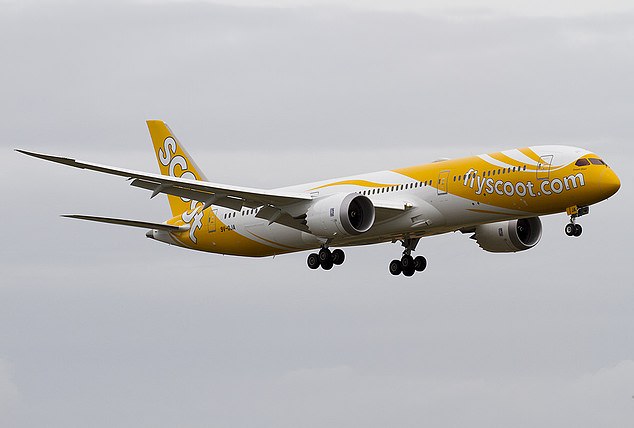 Commenting on his Facebook post, ‘Redles Tian Dude’ said: ‘Just few dollars for a mineral water. Don’t tell me you couldn’t afford it… stop making yourself cheap… Well done cabin crew! You did the right thing!’

‘Tricia Namdrol Drolma’ added: ‘They should charge for the cup as well’, and ‘Von Urairat’ joked: ‘They were expecting you to fill it up with tap water in the lavatory!’

A Scoot spokesperson told MailOnline Travel: ‘Serving complimentary drinking water on board is currently not part of our business policy, and bottled drinking water is available for purchase on our flights.’