AJAX CLEAN UP: Uplifting win in Madrid… but team will be picked apart this summer!

When Dusan Tadic informed Southampton last summer he wished to leave the club, the club’s phones did not vibrate with any great anticipation. Indeed, only one call came at all and there was some surprise when Champions League Ajax decided to move for a player who is now 30.

On the evidence of Tuesday evening in the Bernabeu, however, when Tadic turned the den of the European champions into his own personal playground, it appears inspired.

At Southampton, Tadic’s peers left him behind. Off they went; Morgan Schneiderlin, Virgil Van Dijk, Sadio Mane and Toby Alderweireld all departing for more ambitious clubs.

Tadic was one of those who remained, partly due to clubs being unsure of his ability to be consistent on the continental stage.

Picking up Wednesday’s newspapers, such fears appear to be an illusion. The notoriously hard-to-please L’Equipe made Tadic only the ninth recipient of a 10/10 rating in its 73-year history. He scored one and made two in a dazzling display. Yet for Ajax, this performance meant so much more than one man’s inspiration.

For so long, the mention of the Bernabeu was greeted by furrowed eyes and a shake of the head in Amsterdam. In 2010, Ajax lost 2-0 against Jose Mourinho’s Madrid in the Spanish capital and in his De Telegraaf column the following morning, Johan Cruyff declared: ‘This is not Ajax anymore.’ 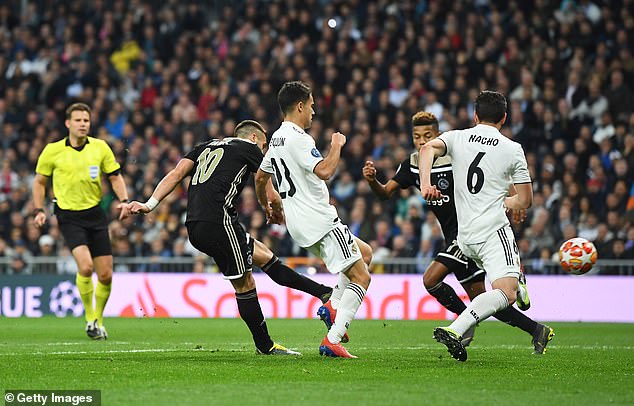 Exasperated by the club’s policy of recruiting overseas talent instead of nurturing their own, this was the starting pistol for the ‘Velvet Revolution’. Cruyff stamped his personality over the club once more, encouraging legends such as Edwin van der Sar and Marc Overmars into the boardroom, with Dennis Bergkamp, Jaap Stam, Frank de Boer and Wim Jonk all given senior coaching positions.

Amid the giddiness that greeted Tuesday evening’s performance, Ajax have enjoyed some splendid European nights this decade.

They defeated Barcelona in 2013 with team including six homegrown talents. In 2012, they beat Sir Alex Ferguson’s Manchester United at Old Trafford and Roberto Mancini’s Manchester City in Amsterdam. 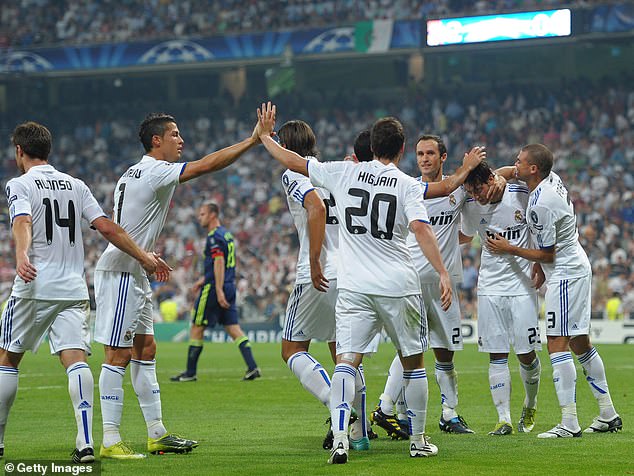 A youthful team reached the 2017 Europa League final but were naive in losing 2-0 to Jose Mourinho’s United. Ajax had 70 per cent of the ball that night, with 634 passes to United’s 235. As Mourinho said: ‘There are a lot of poets in football but they do not win many titles.’

On Tuesday, only four who started that game began in the Bernabeu to secure a profound result – Ajax’s first Champions League quarter-final since 2003 and Madrid’s first round of 16 exit since 2010.

It has not always been so progressive under manager Erik ten Hag, who spent two years as a youth coach at Bayern Munich in Pep Guardiola’s time in Bavaria. 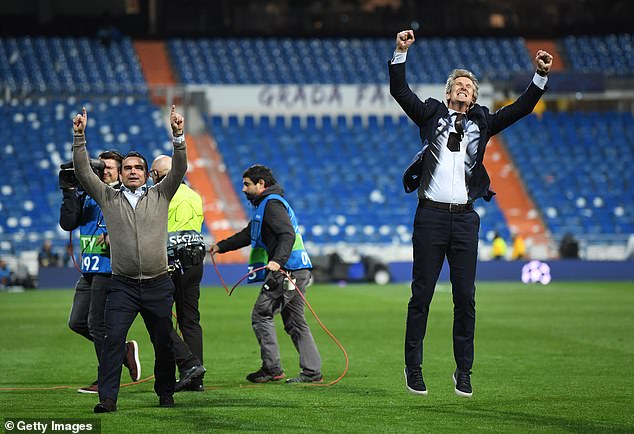 Tadic held three hours of crisis talks with Ten Hag after the 1-1 draw at Bayern Munich earlier this season. In the Hilton Hotel in Munich, Tadic explained that the players had grown tired of the manager’s approach to training, where 11 v 11 games would demand reserve players mirror the team’s upcoming opponents.

Yet Ten Hag listened, adapted and the 4-1 win in Madrid was vindication. Six players in their starting line-up are 22 or younger but this causes both angst and pride. The reality is that the team will be picked apart this summer.

Ajax cannot compete financially. As Overmars said this week: ‘Our wage budget for the first, second and youth teams is €28m. That’s what Gareth Bale earns in a year.’ 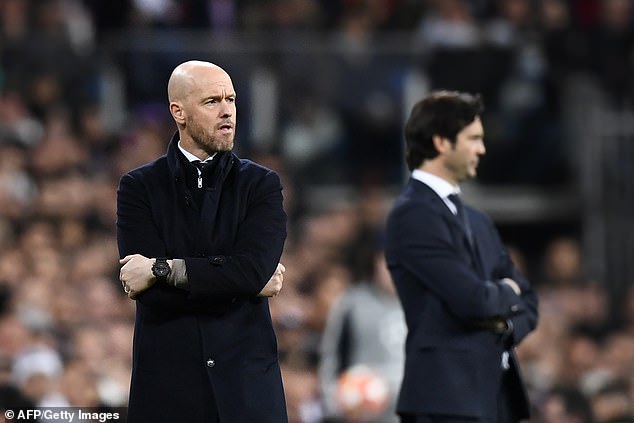 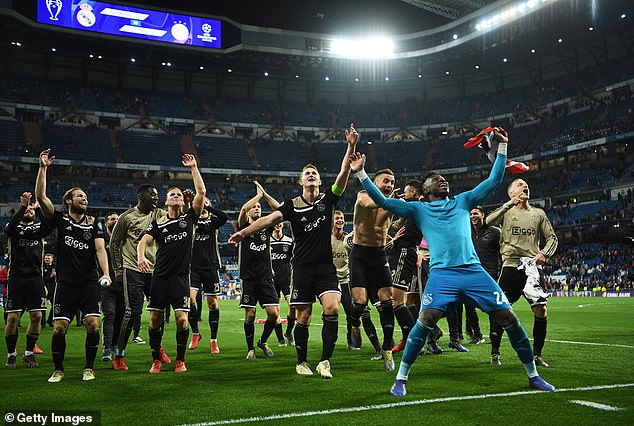 The exodus has already begun. Frenkie De Jong, the midfield maestro who outplayed Toni Kroos and Luka Modric, has agreed a £65m transfer to Barcelona.

Sources in Amsterdam expect the club to cash in on this squad to the tune of £150m this summer, with strong interest in forwards Hakim Ziyech and David Neres and goalkeeper Andre Onana. Defender Matthijs de Ligt, 19, will command at least £70m.

The club rejected a £38m January offer from a Chinese club for Neres. Ajax were prepared to sell and replace him with 18-year-old Mexican Diego Lainez, who turned them down for Real Betis. 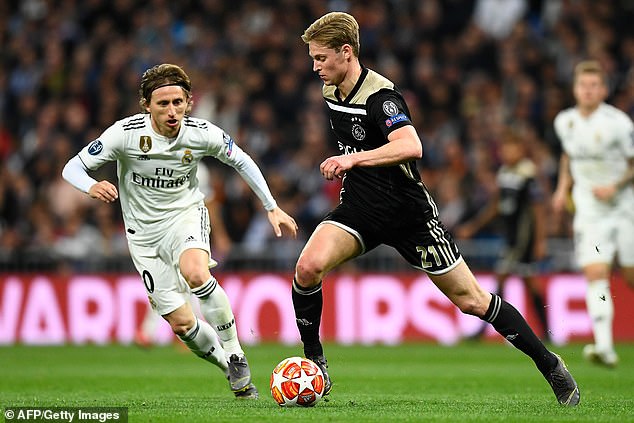 It compared each individual to Ajax legends of times gone by and urged the group to remain at the club for a little while, to achieve something special.

In Madrid, their moment came and the excitement now is what may follow. Despite having the biggest budget in Holland, Ajax are without a league title since 2014.

This must change, but the legacy of this Ajax team may yet be written in Europe. 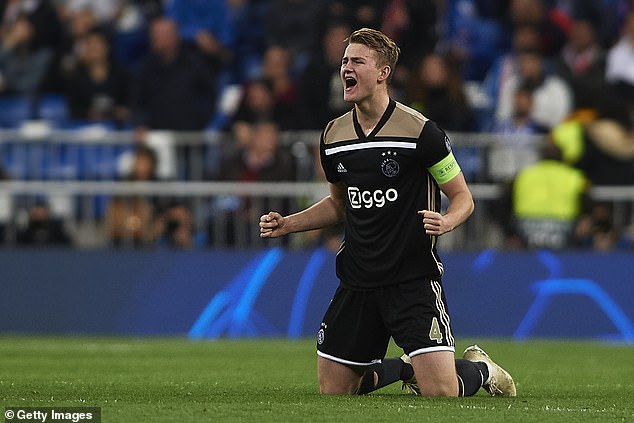 Four Ajax stars who could leave in summer

Ajax rejected £38million bid for Neres in January from Chinese side Guangzhou Evergrande.